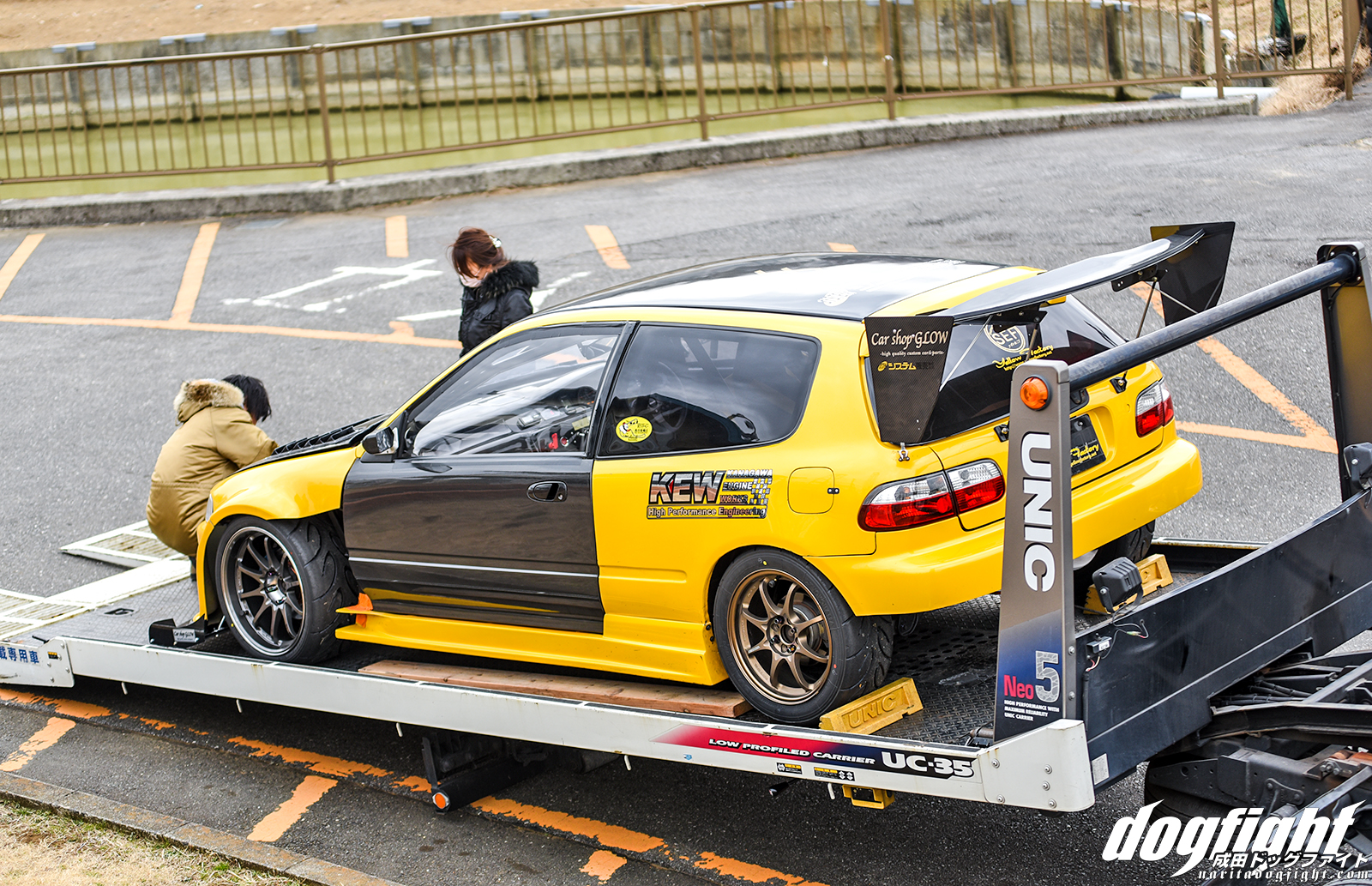 It’s always refreshing to me to see productivity in it’s most energetic form.  I think their are many positive effects to being constructive and it seems to me that it is overlooked quite often.  It’s an aspect of life that adds a great deal of meaning to what we choose to pursue.  Instinctively knowing the difference between being busy and being productive gives us the ability to progress through life much more efficiently; ultimately allowing us to experience more, and get the most out of our time.  Ryo Kaneko is a man who knows the benefits of productive living, and it shows through his work on the circuit.

If you are involved in motor sports in any capacity, you know how time consuming it can be.  The majority of us don’t do this professionally and have to balance our careers and avocations appropriately; and well, that can get difficult.  Just a short conversation with Ryo will leave you with the impression that he is a man that wastes no time.  Full time work at Systems Hanbai, an office solution company, owning and operating a very popular karaage chicken joint in Aichi, Tokyo (official chicken of the Attack series),  and involvement in several committees and councils for his business and city.  The little time he gets to relax, is most likely spent between hi-balls at がブリチキン and working on his EG6. 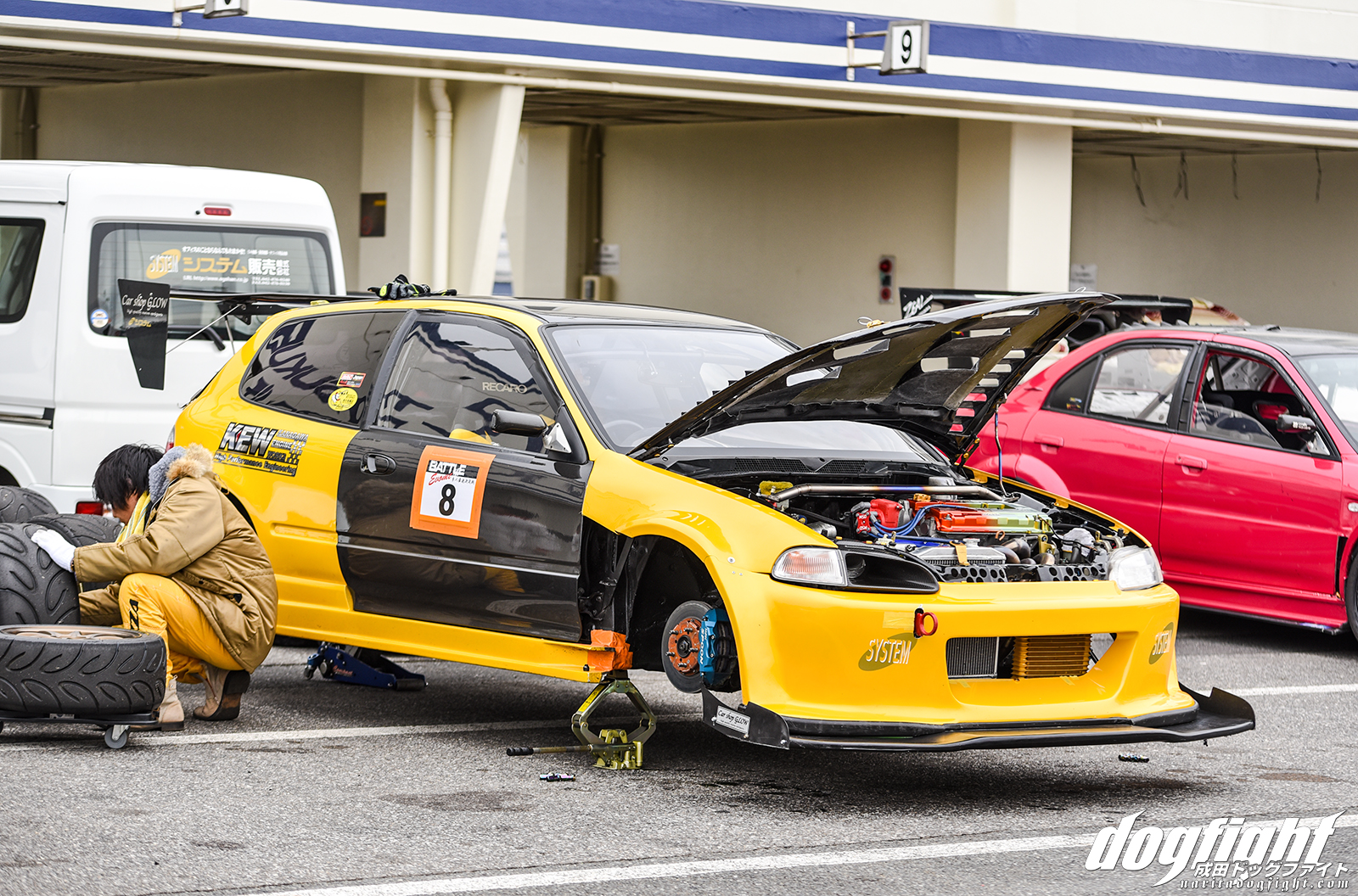 The Yellow Factory supported Civic has come a long way in the past few years.  The car made quite an impact at it’s ‘debut’, so to speak, at TAS years ago (2011)showing at the YF booth.  Of course this was before the influx in popularity of Time Attack and the characteristics of the cars that go along with it.  I suppose it was a pioneer in this regard albeit still mild to today’s standards.  The car you see here today is far different from the car 6 years ago – an amalgamation of years of research and seat time.  The older setup was already victor in a handful of small series throughout East Japan; including Nikko Circuit races, and the Direzza Challenge series.  Back then Ryo’s fastest time around TC2000 was 1’01.xxx – not so much anymore. 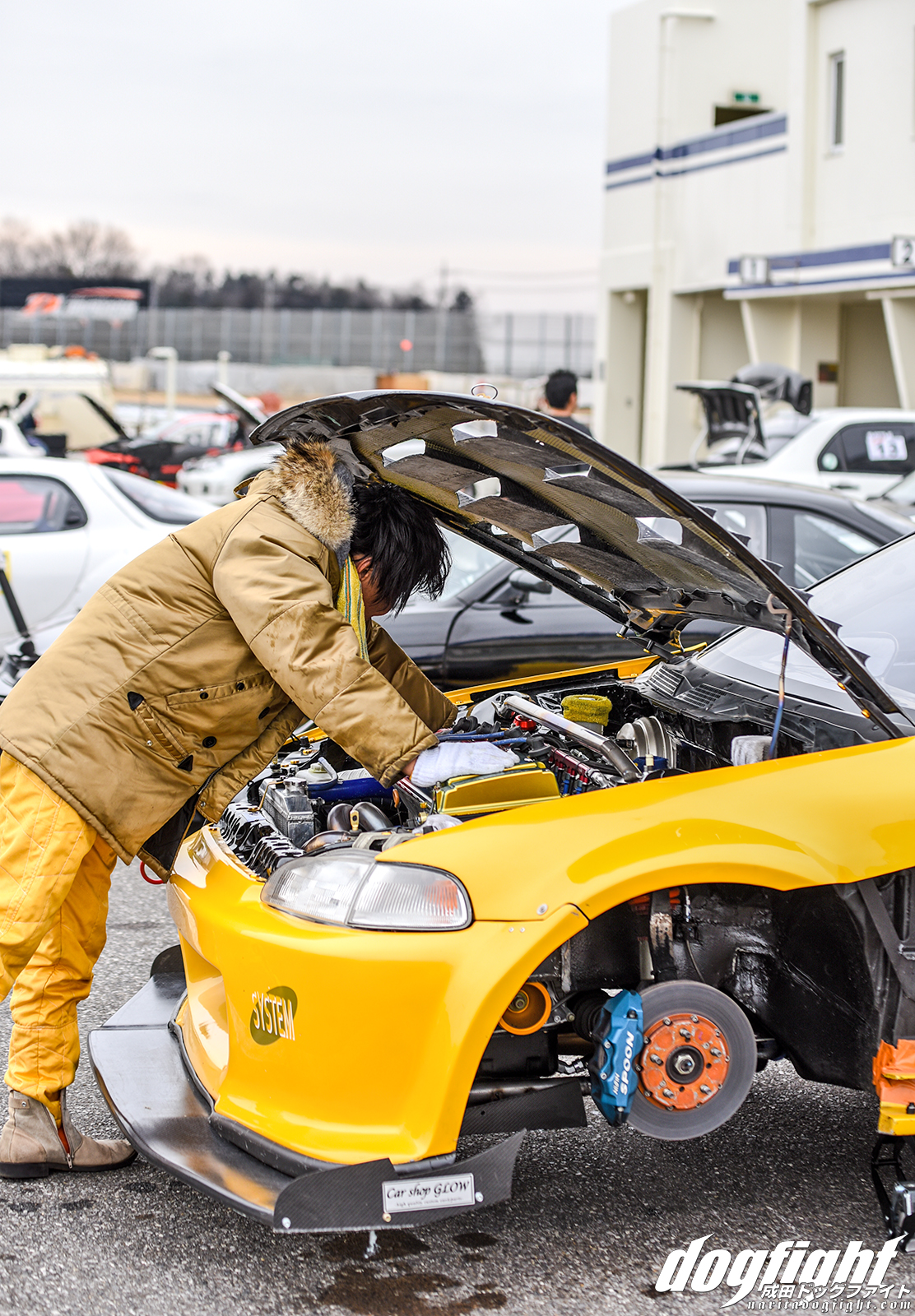 Early Sunday morning at Tsukuba, Ryo gives the car his own scrutinizing before heading out for the first hot session. 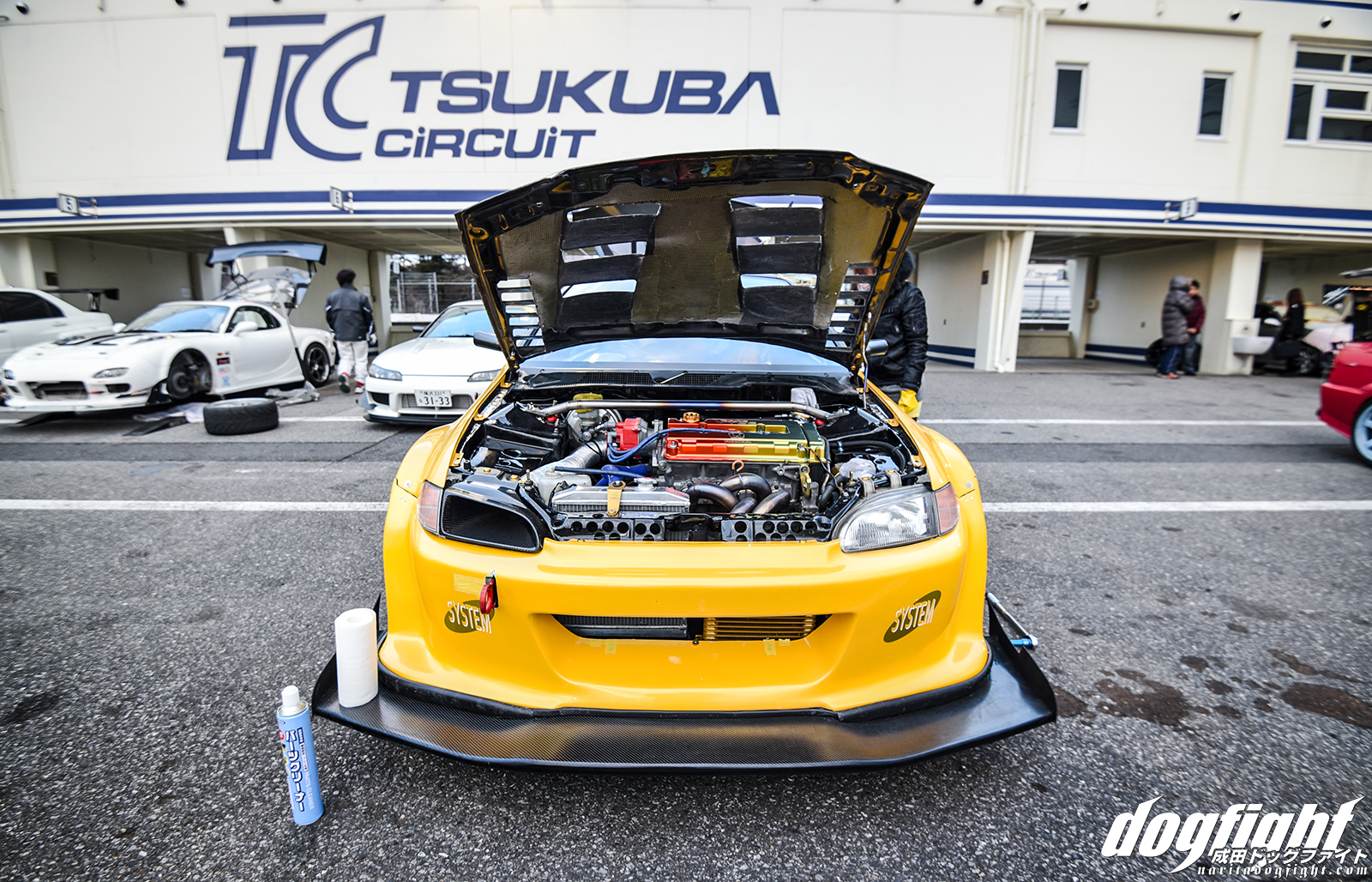 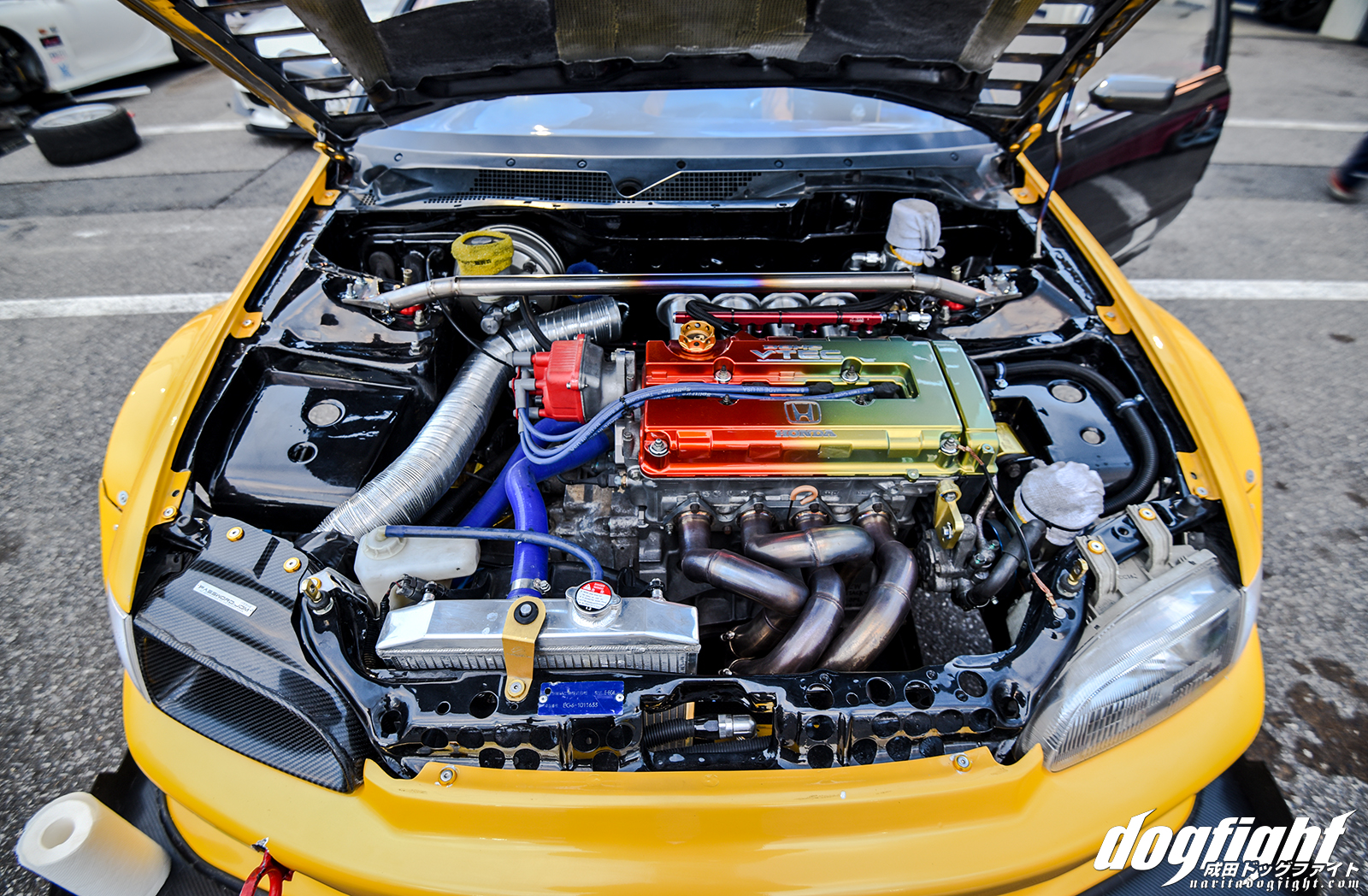 The B18C motor originally built by sponsor F-Drider Planning, has been refreshed by Kanagawa Engine Works.  The oversized TODA pistons and TODA internals allow the motor to rev to an impressive 9500 RPM. 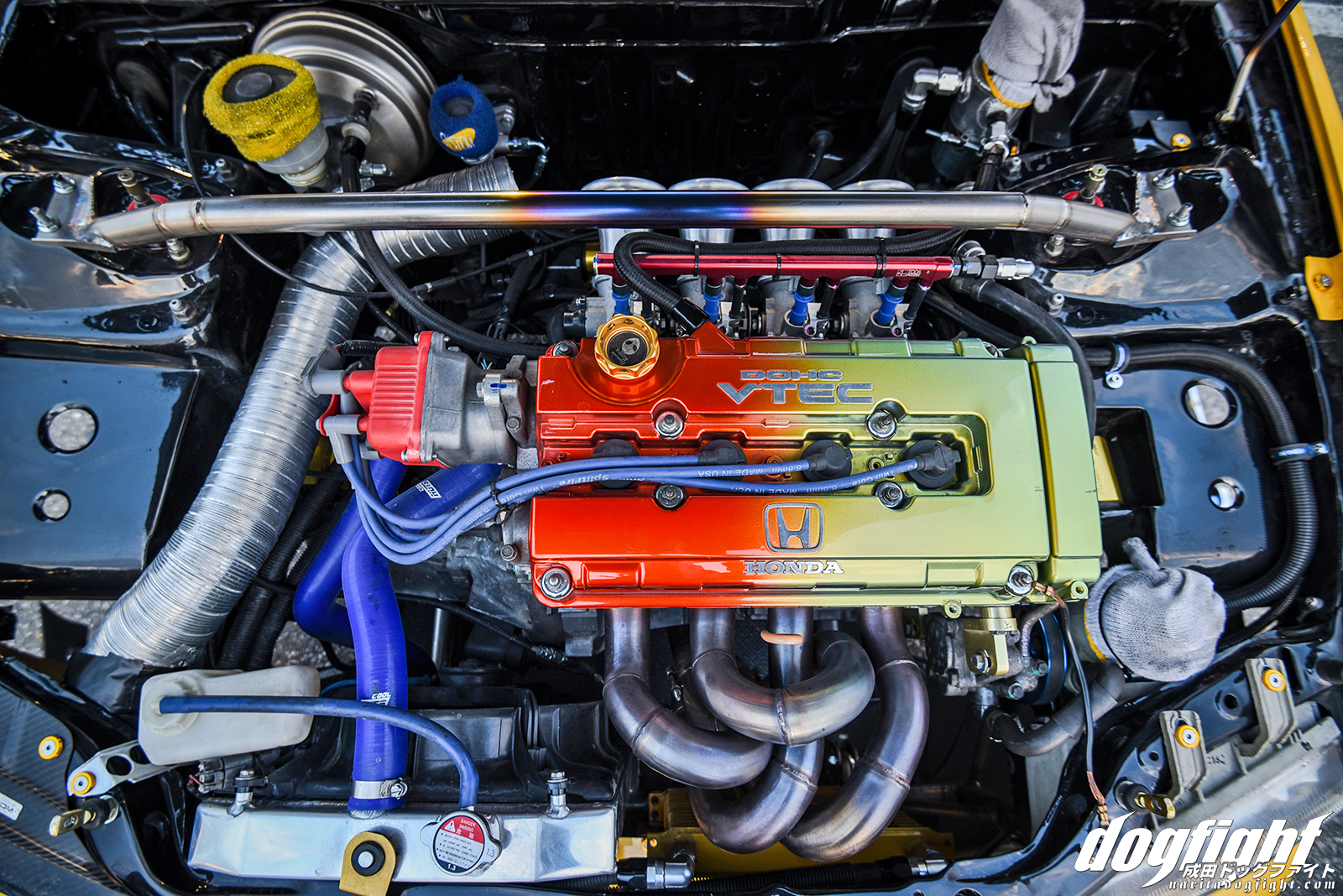 A set of ITB’s and custom tubular exhaust manifold help generate additional power out of the B-series making a very healthy 256 horsepower.  There’s a slew of support modifications done to help alleviate the stress of circuit running as well.  The package is tuned at KEW utilizing a Motec ECU; the reliability of this setup is second to none. 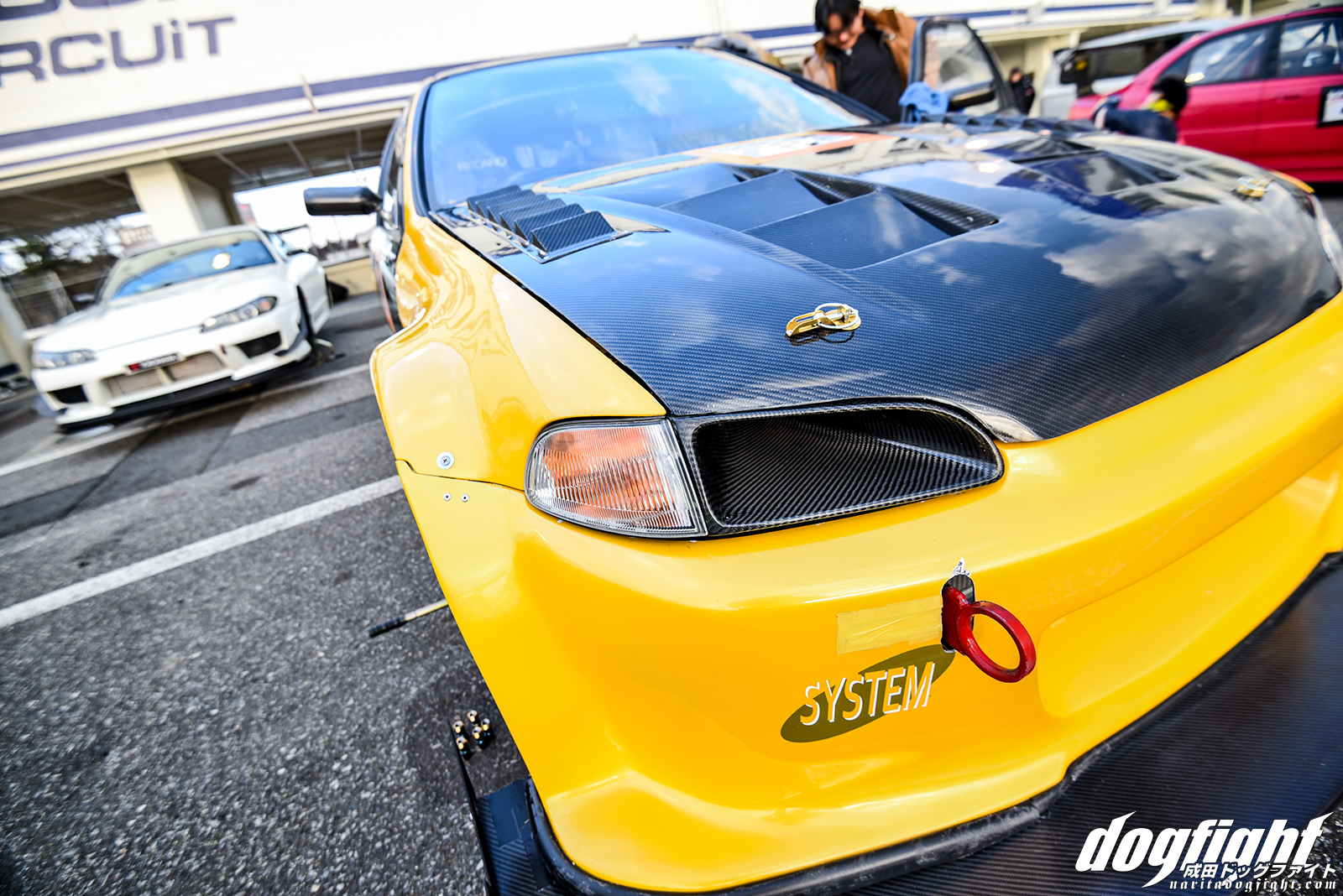 The front end had recently been through a change in aerodynamics after visiting Hara-san at Car Shop Glow months ago.  A Garage Work front bumper plays the focal point of a newly crafted carbon splitter and end plate setup.  A carbon headlight duct is used to funnel air directly to the throttles. 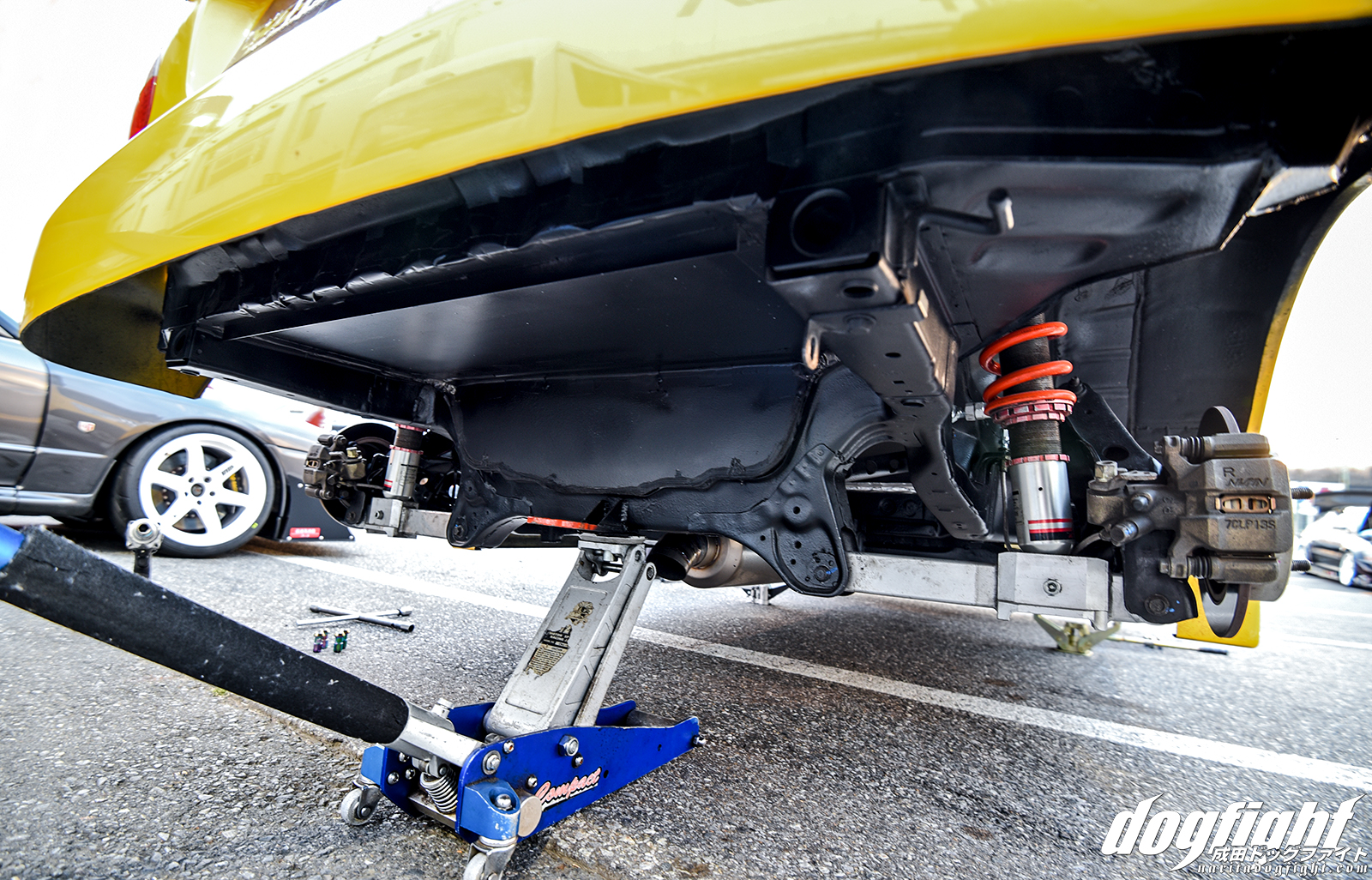 Underneath the car I was treated to a very familiar site.  Much like my own build, the spare tire well has been removed and in it’s place a block off panel to shed weight.  Custom LCA’s host the F-Drider coilovers at all four corners. 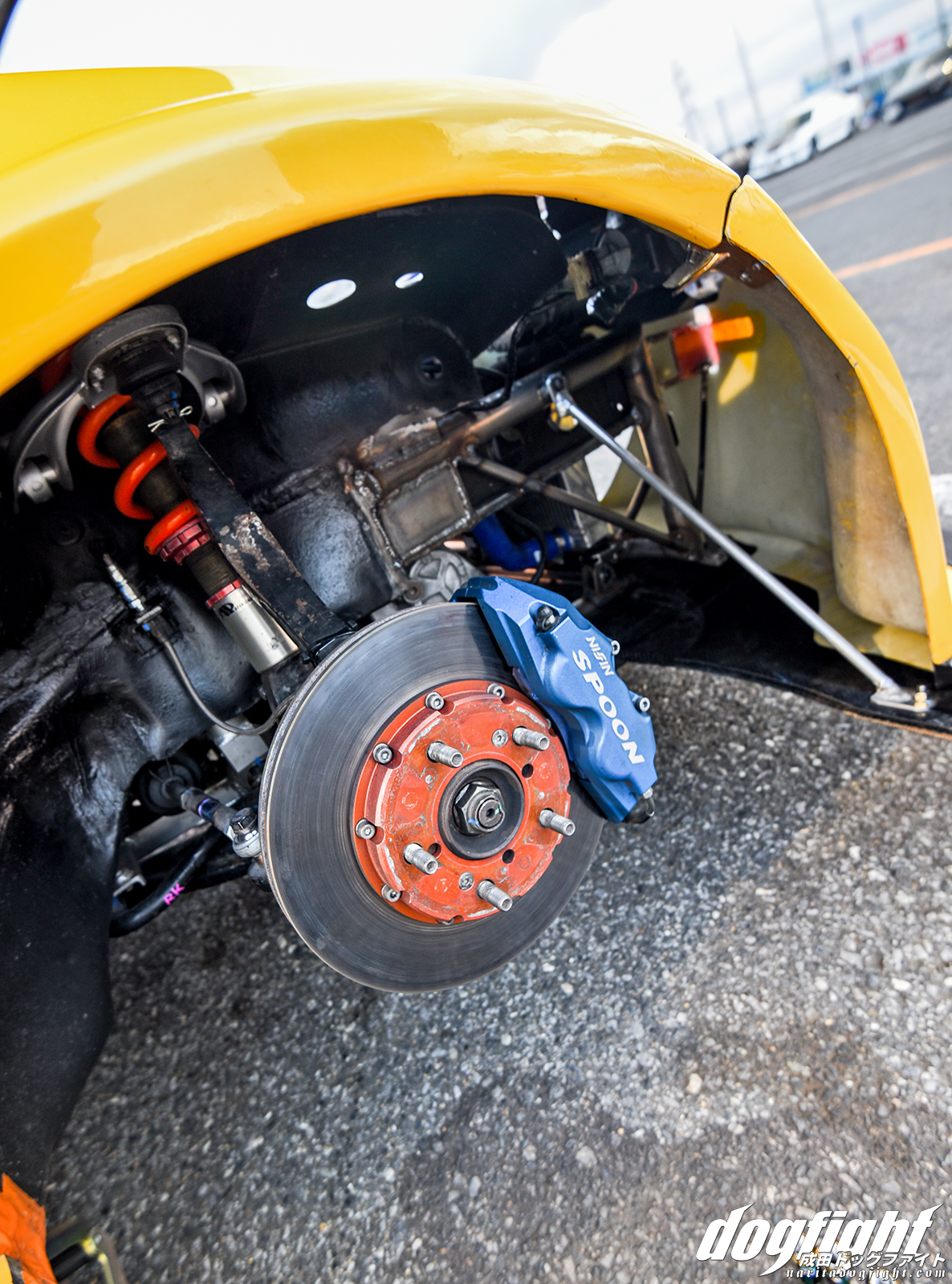 Spoon calipers are the go-to choice for Honda drivers at the circuit.  They are unmatched in weight and stopping power for the smaller chassis.  You can get a glimpse at some of the custom work on the front end that continues after the frame rails; both saving weight, and allowing room for the much larger tire setup. 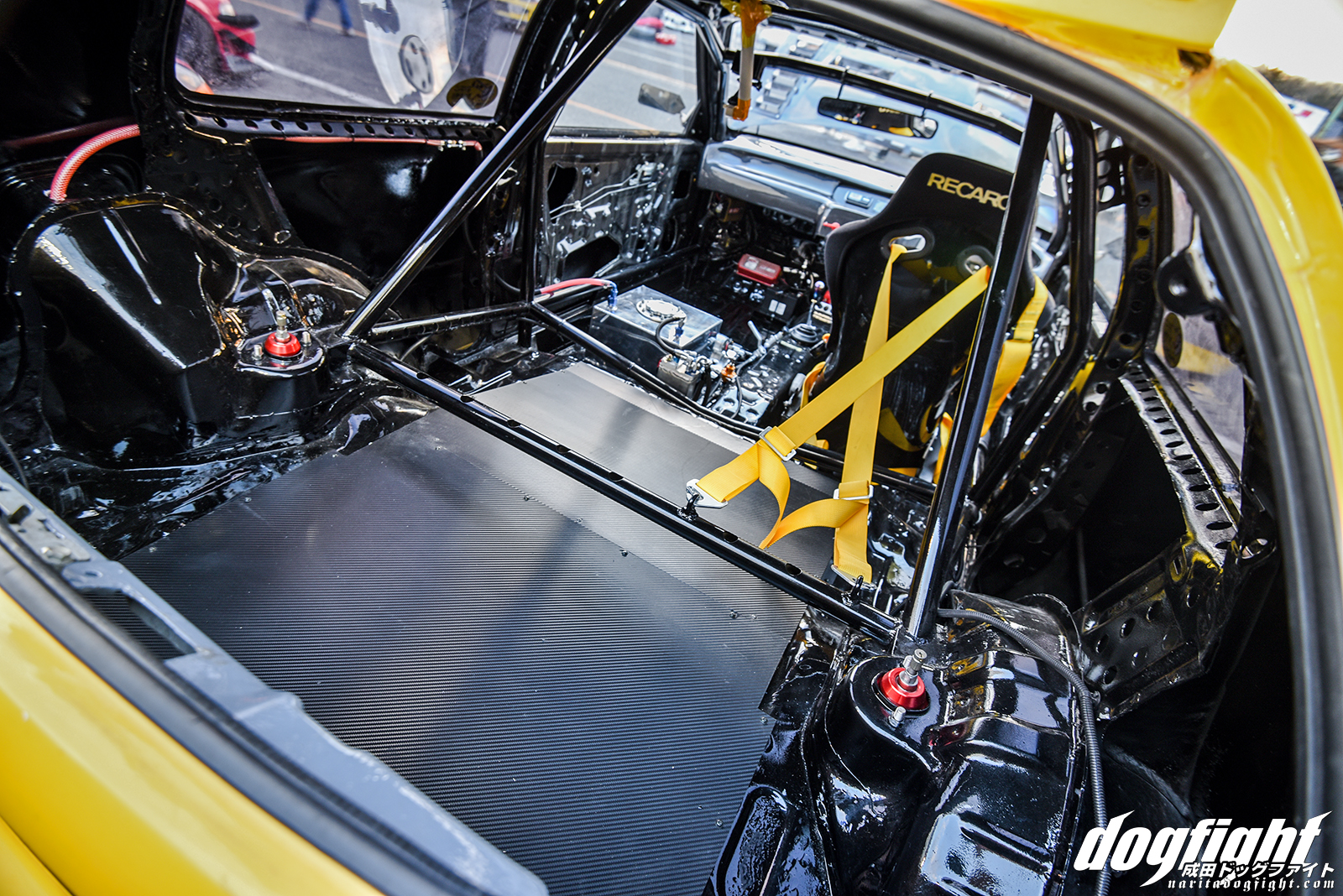 Carbon panels block off the rear of the hatchback. 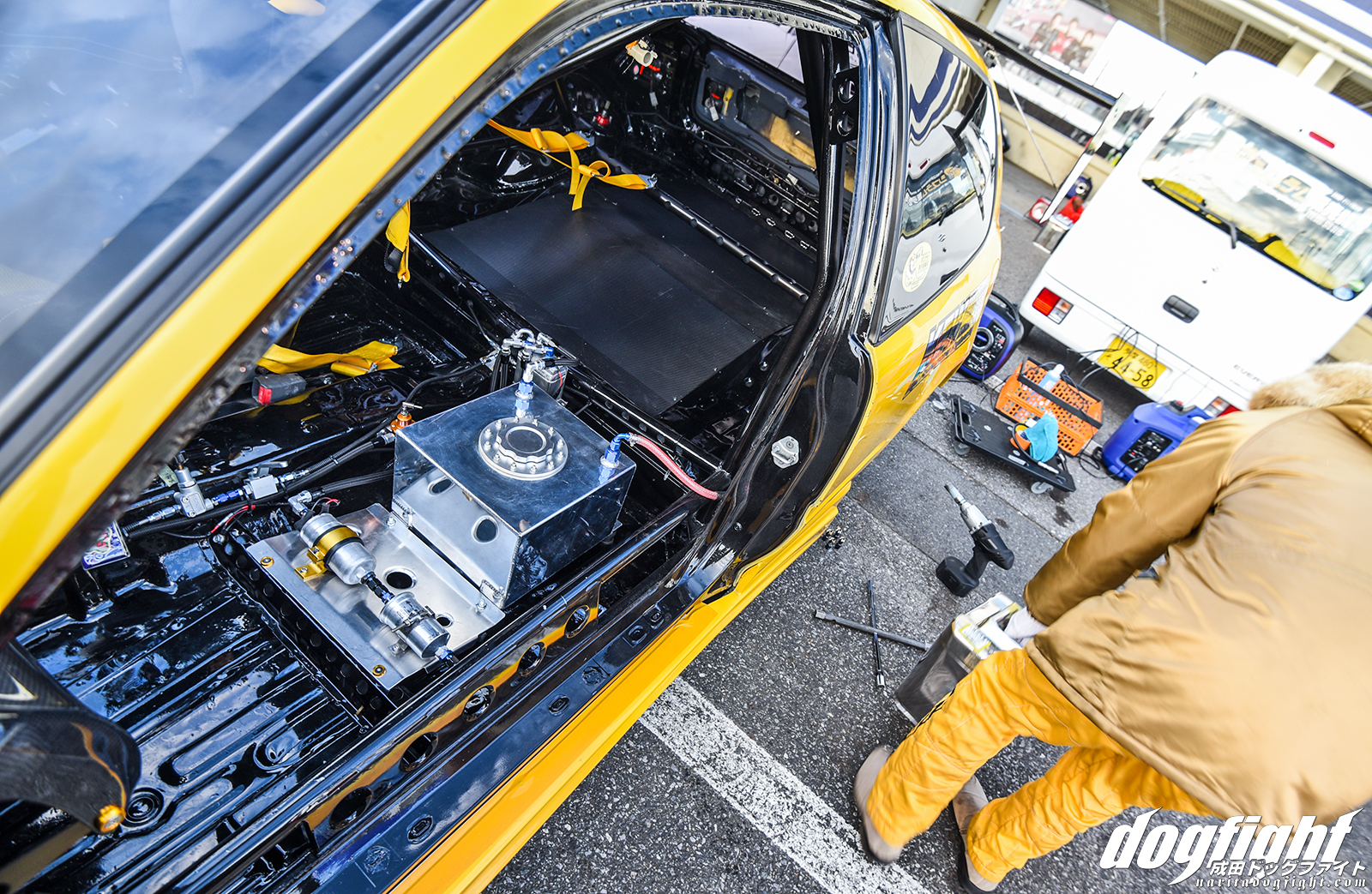 A look at the passenger side of the car reveals the fuel components of the build.  A fuel cell, filter, pump, and FPR are housed on the passenger floorboard.  Ryo to the right using his break to refuel the car. 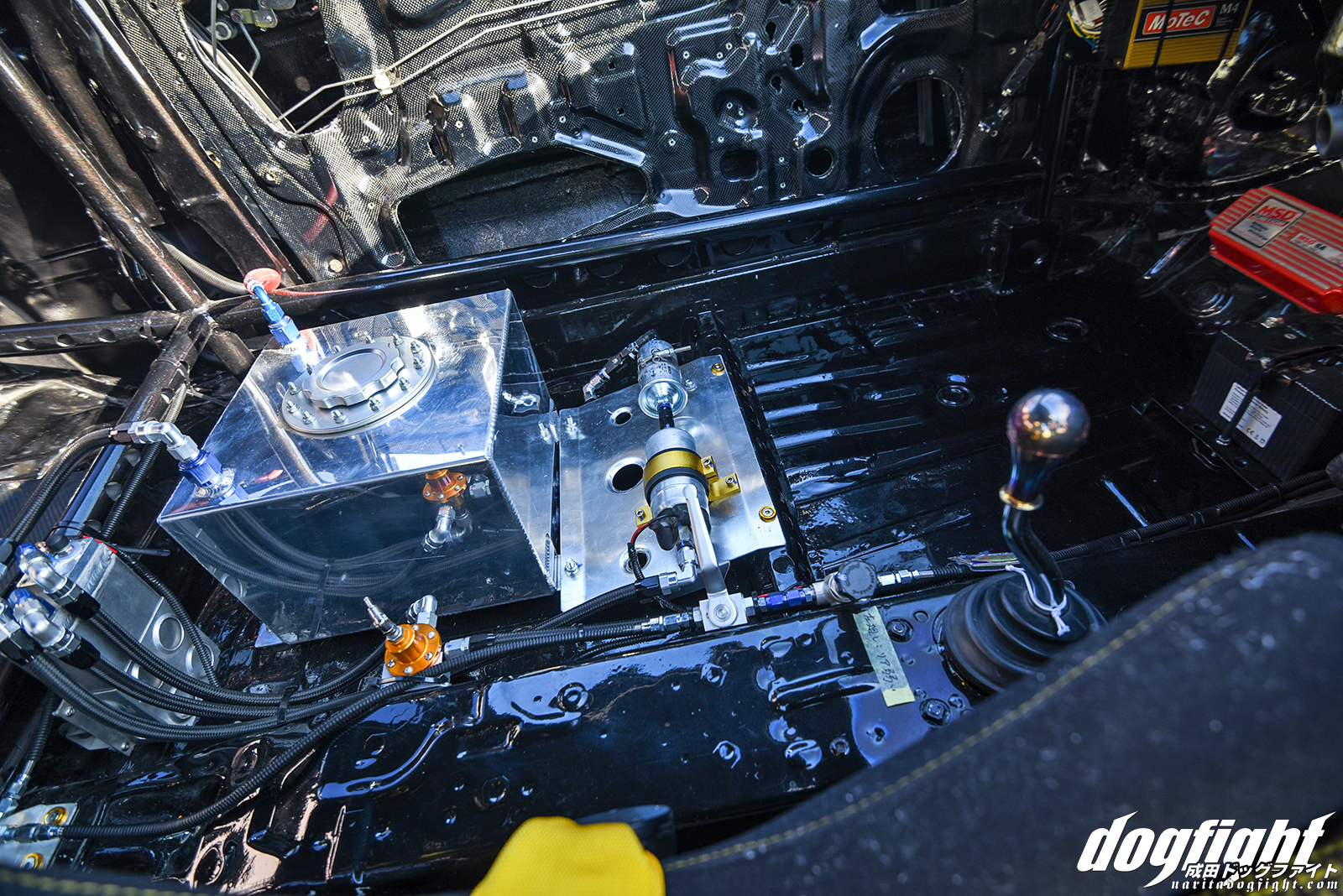 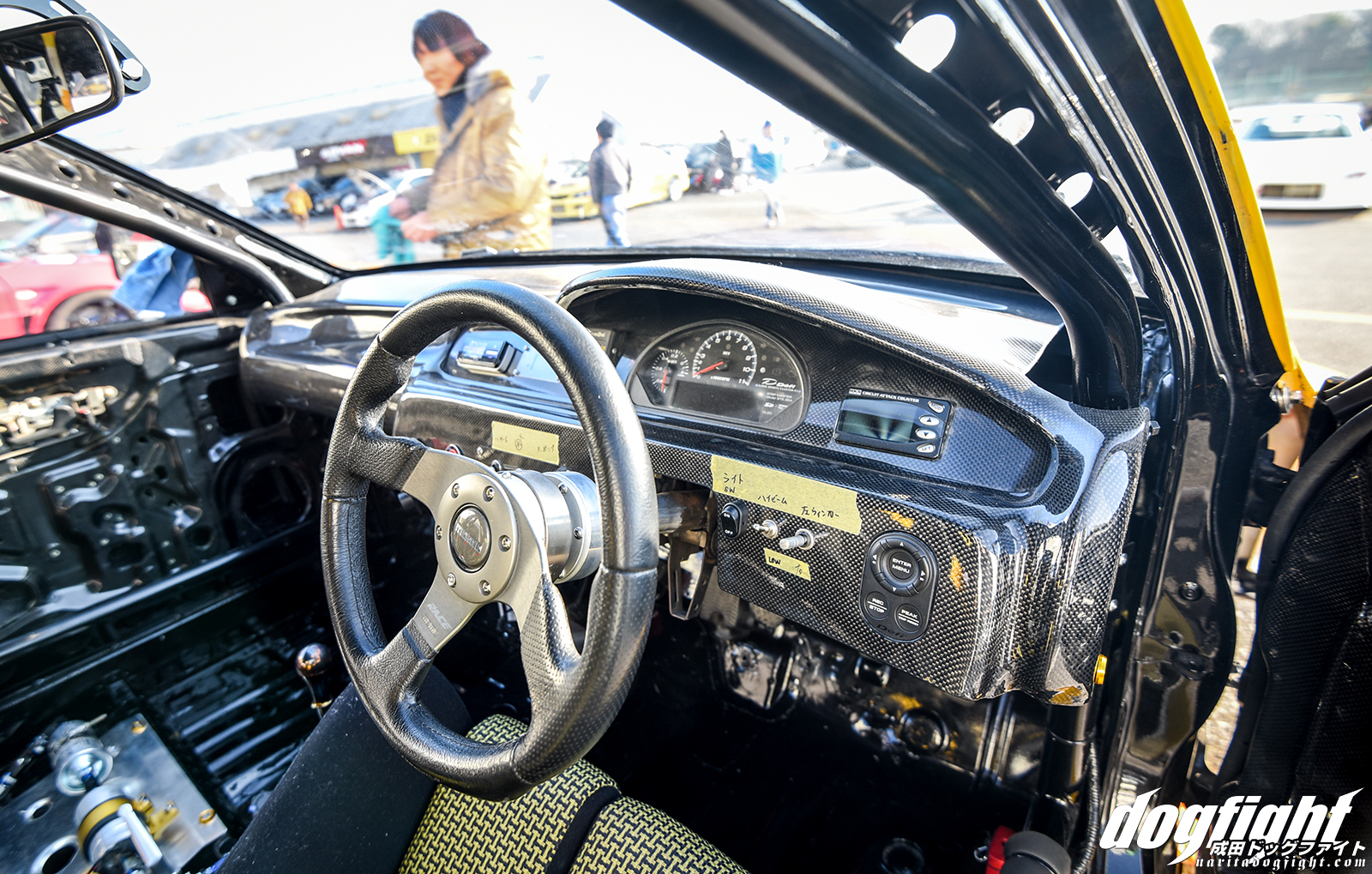 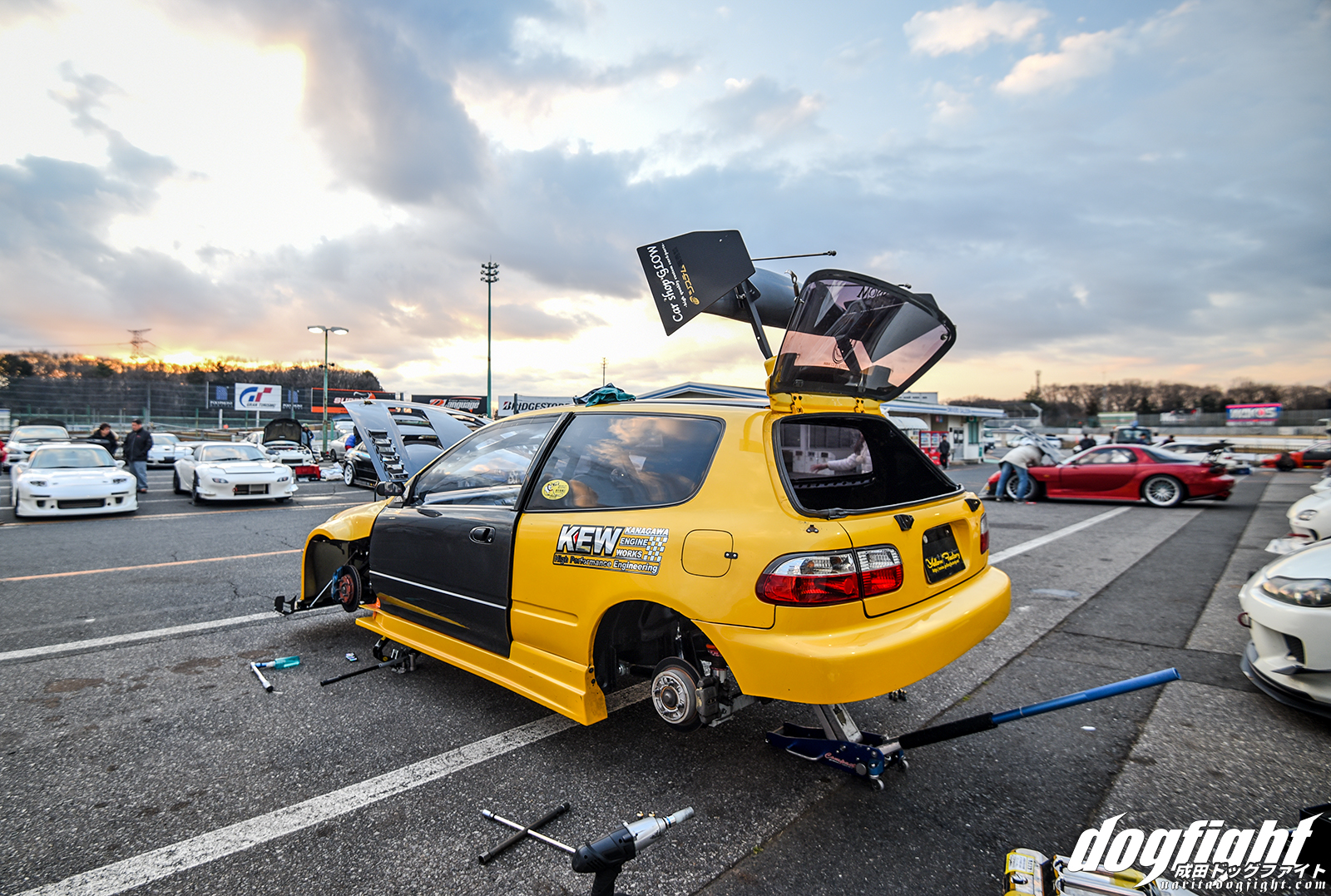 The GT wing atop the rear hatch gives the little car stability through the turns.  Yellow Factory carbon doors and Craft Square mirrors lighten the load, as well as give the Civic a very good look. 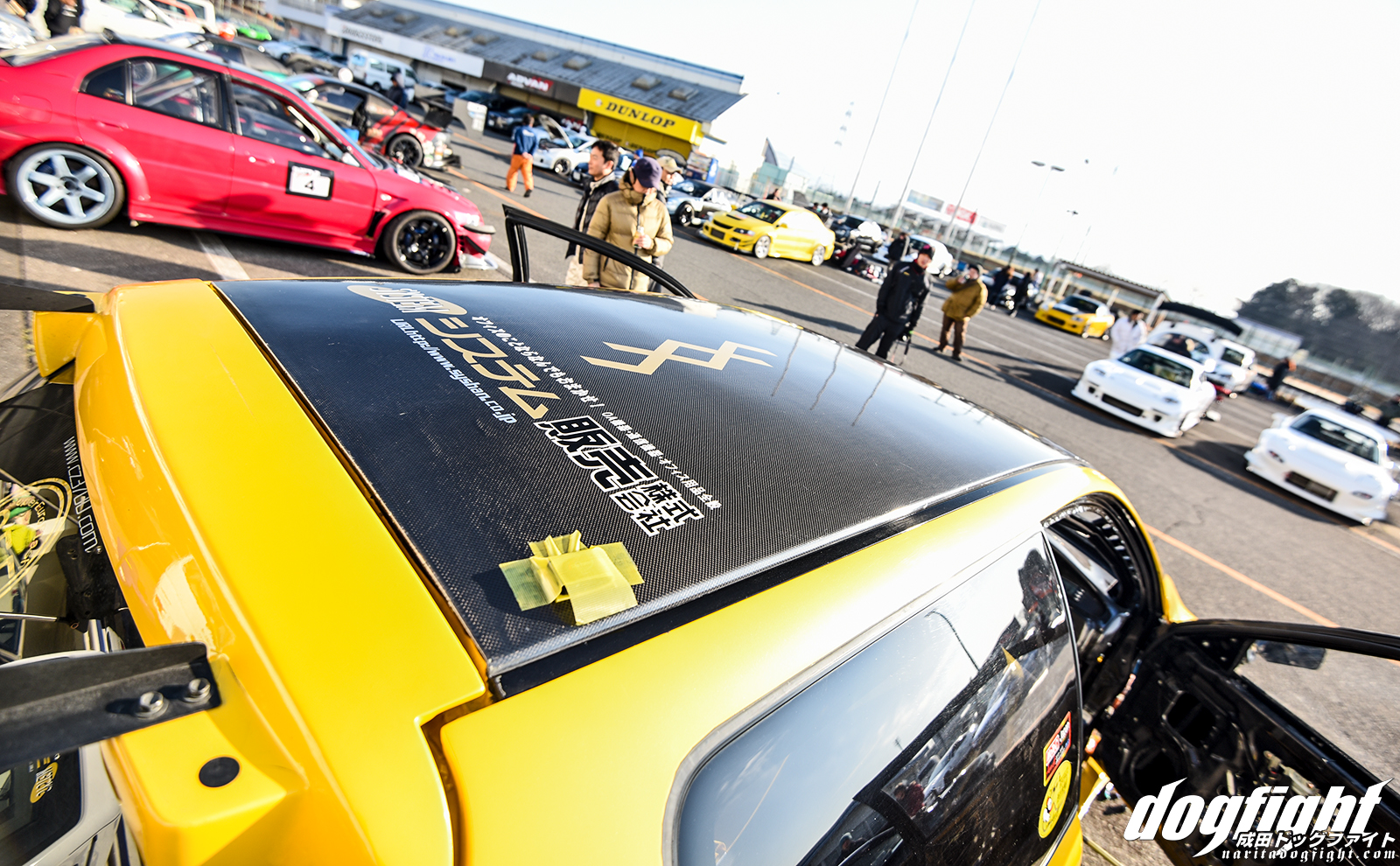 A Yellow Factory carbon roof reduces weight and effectively lowers the center of gravity for the EG. 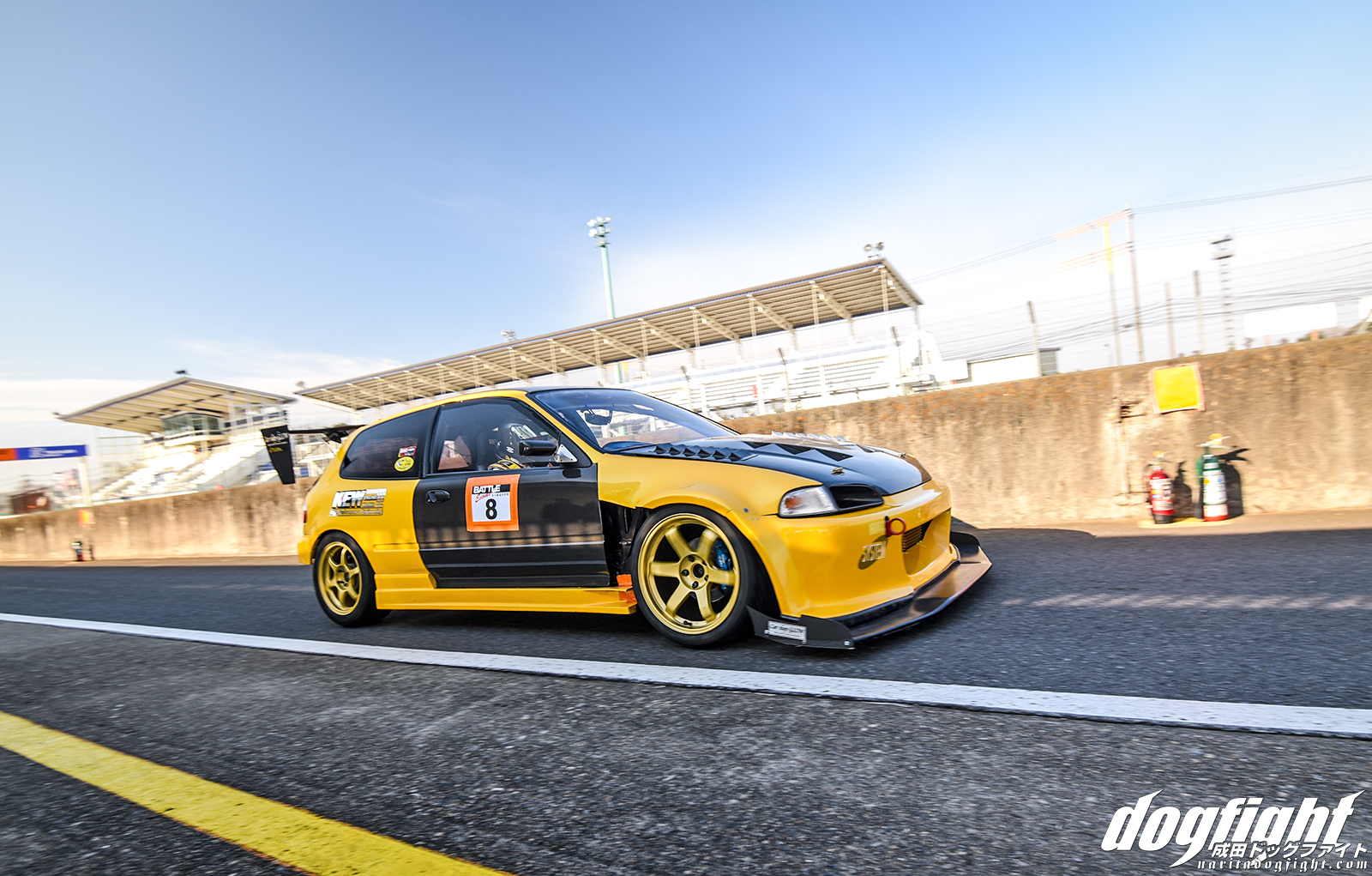 Heading out to track, Ryo was confident in consistently setting sub-minute lap times.  His TC2000 personal record is an incredible 57.661, with a goal of eventually  breaking into the 56 second range (much like Tokue of Garage Work just did).  Conditions were good for fast laps, and I had high hopes that I’d see some personal bests during the morning. 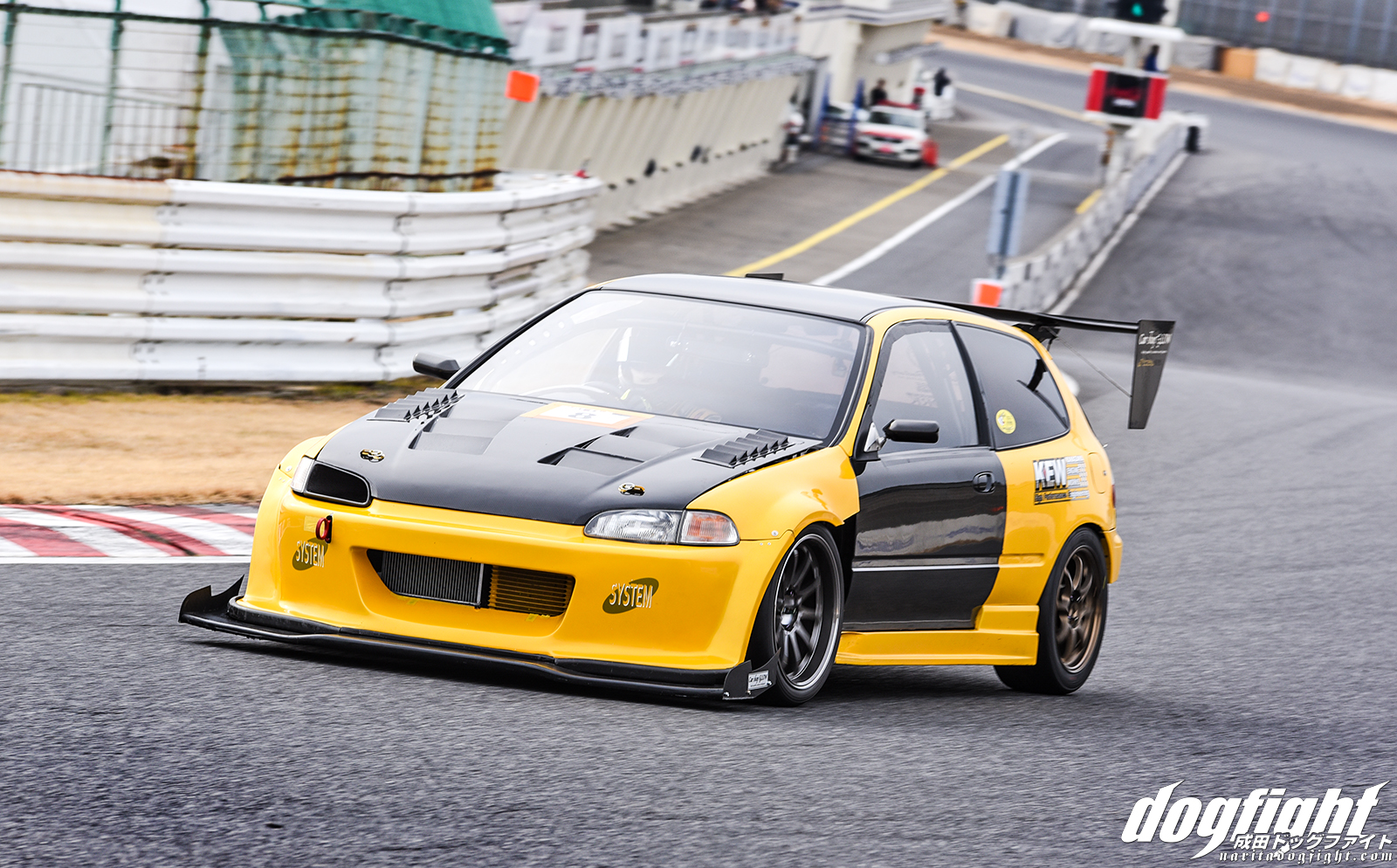 Heading into the first turn, hard on the brakes. 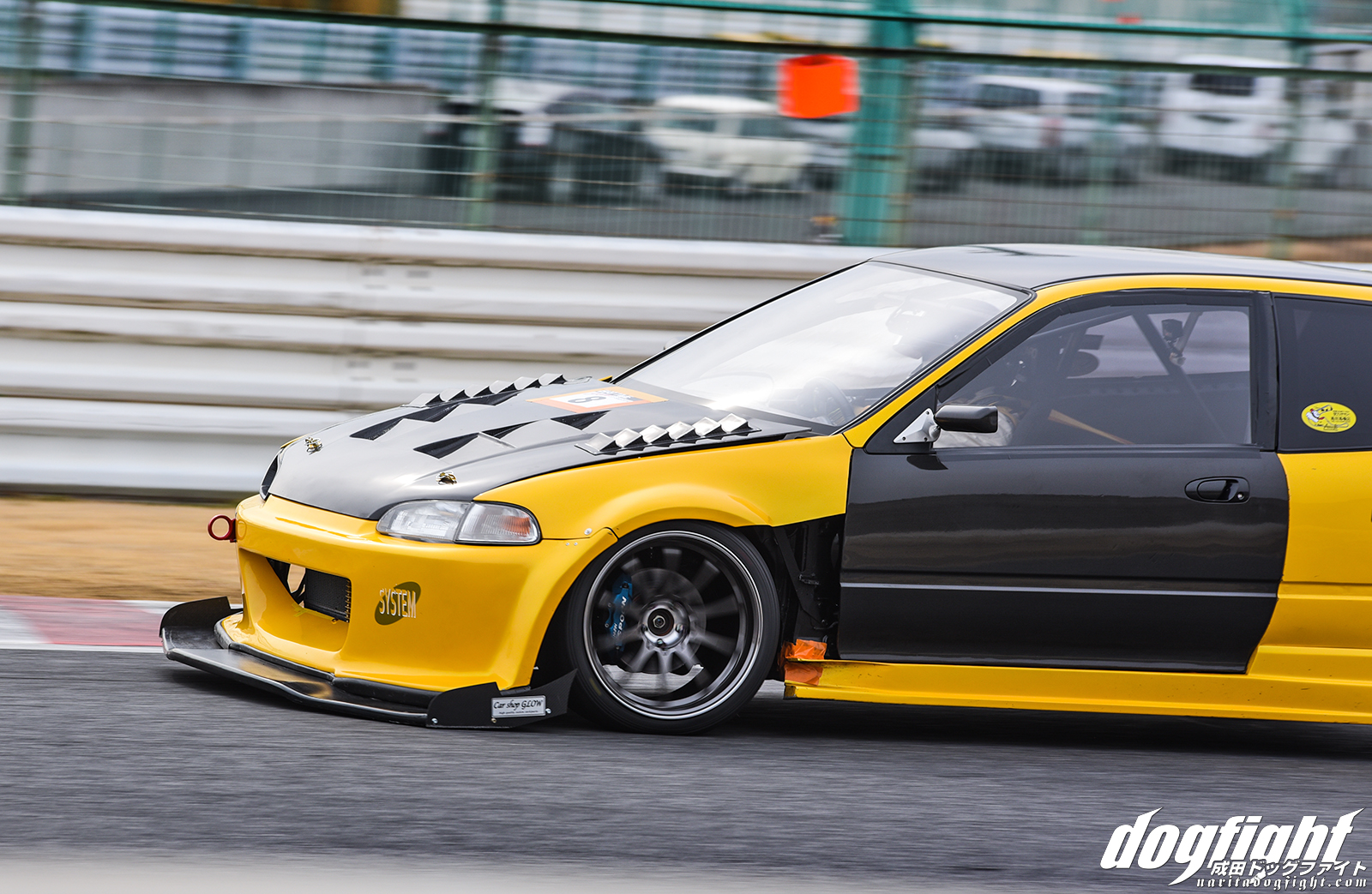 The 295 Advan A050’s using up as much track surface as possible to keep the front end planted. 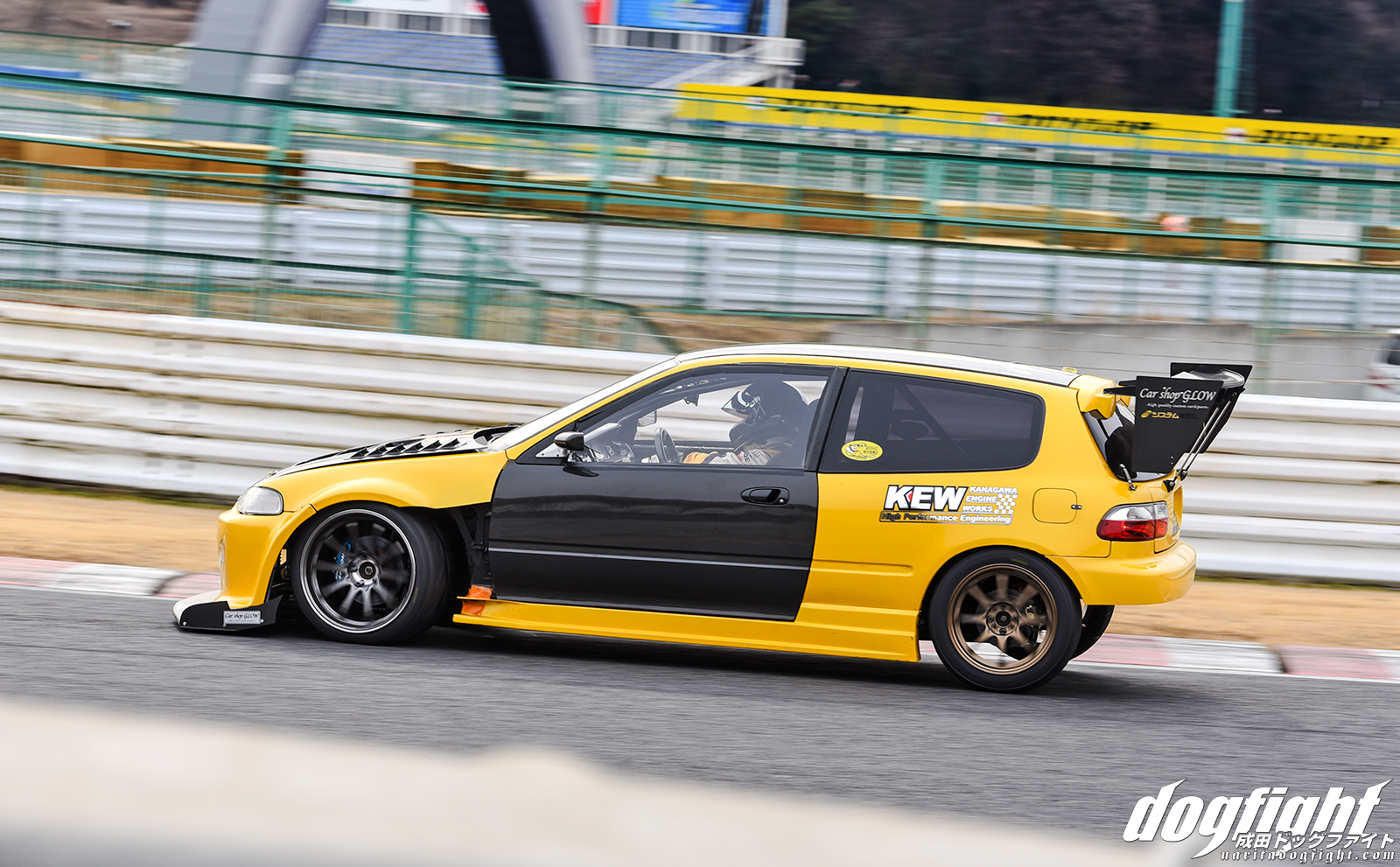 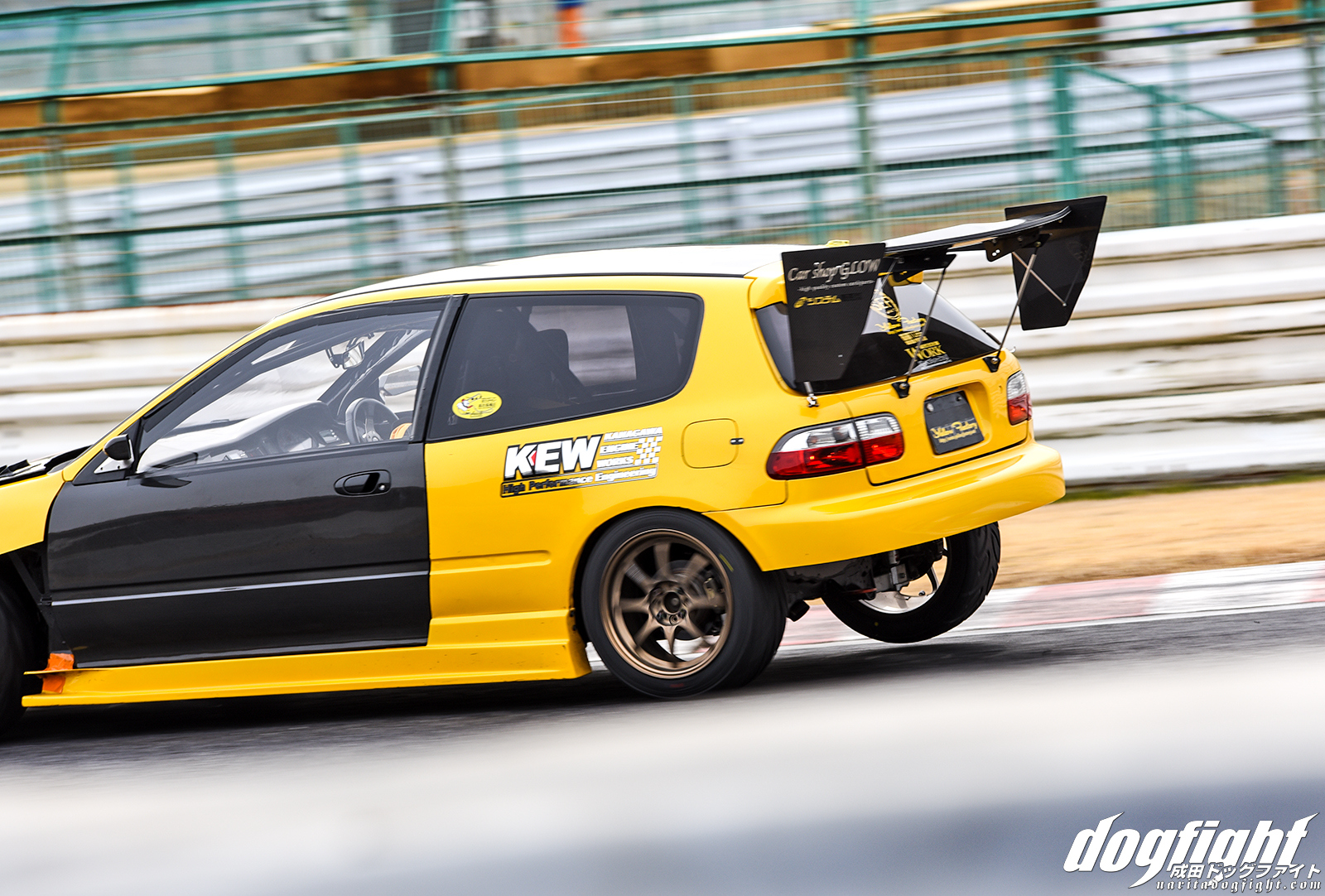 The stiffness of the suspension components showing their colors here, as Ryo three-wheels into the apex. 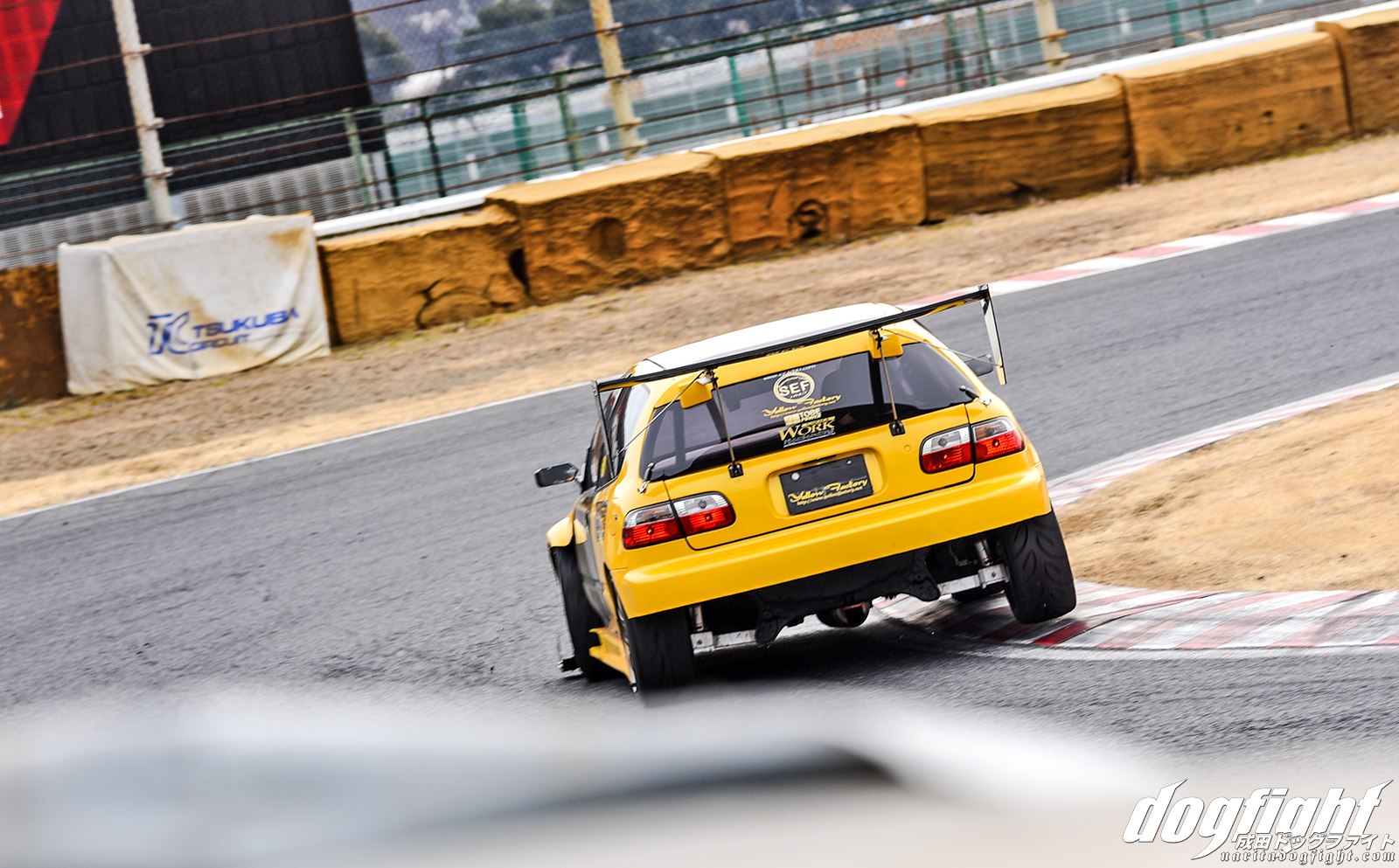 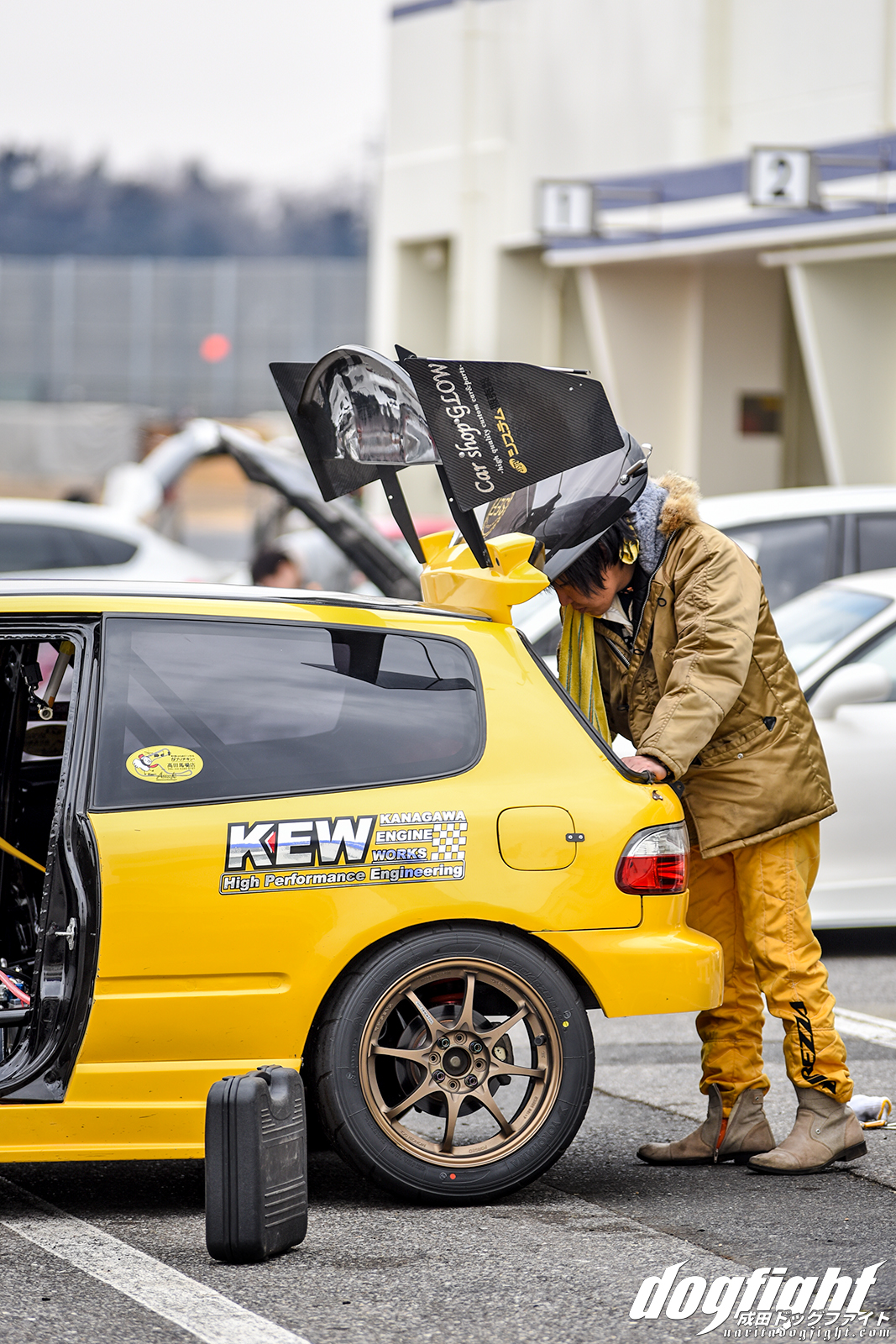 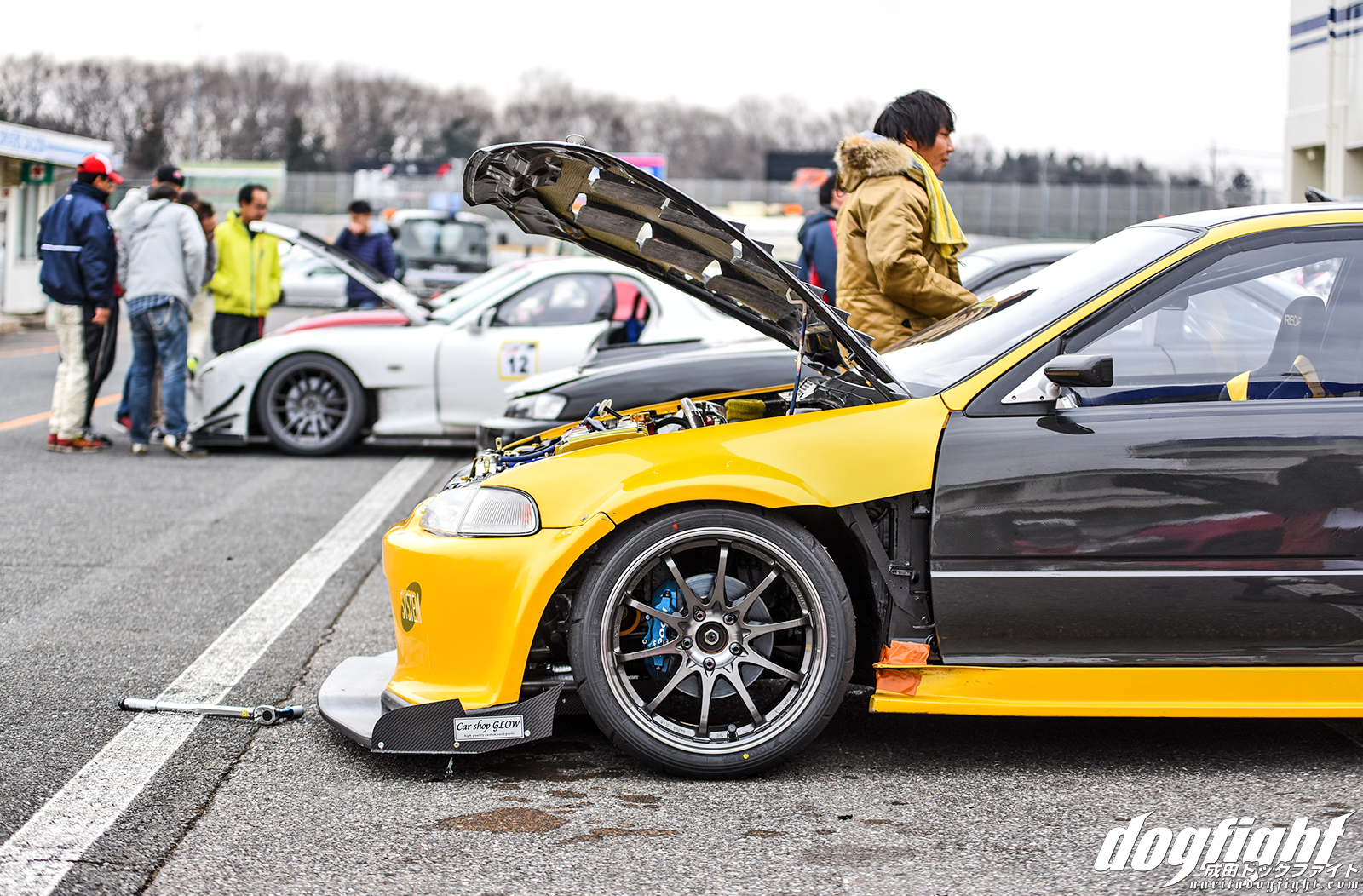 …but he’ll be back to try again.  Between work, meetings, restaurant operations, and all the other work, Ryo says he will always find time for racing.  After all, what’s the point of being productive if it’s not benefiting the balance of your life? 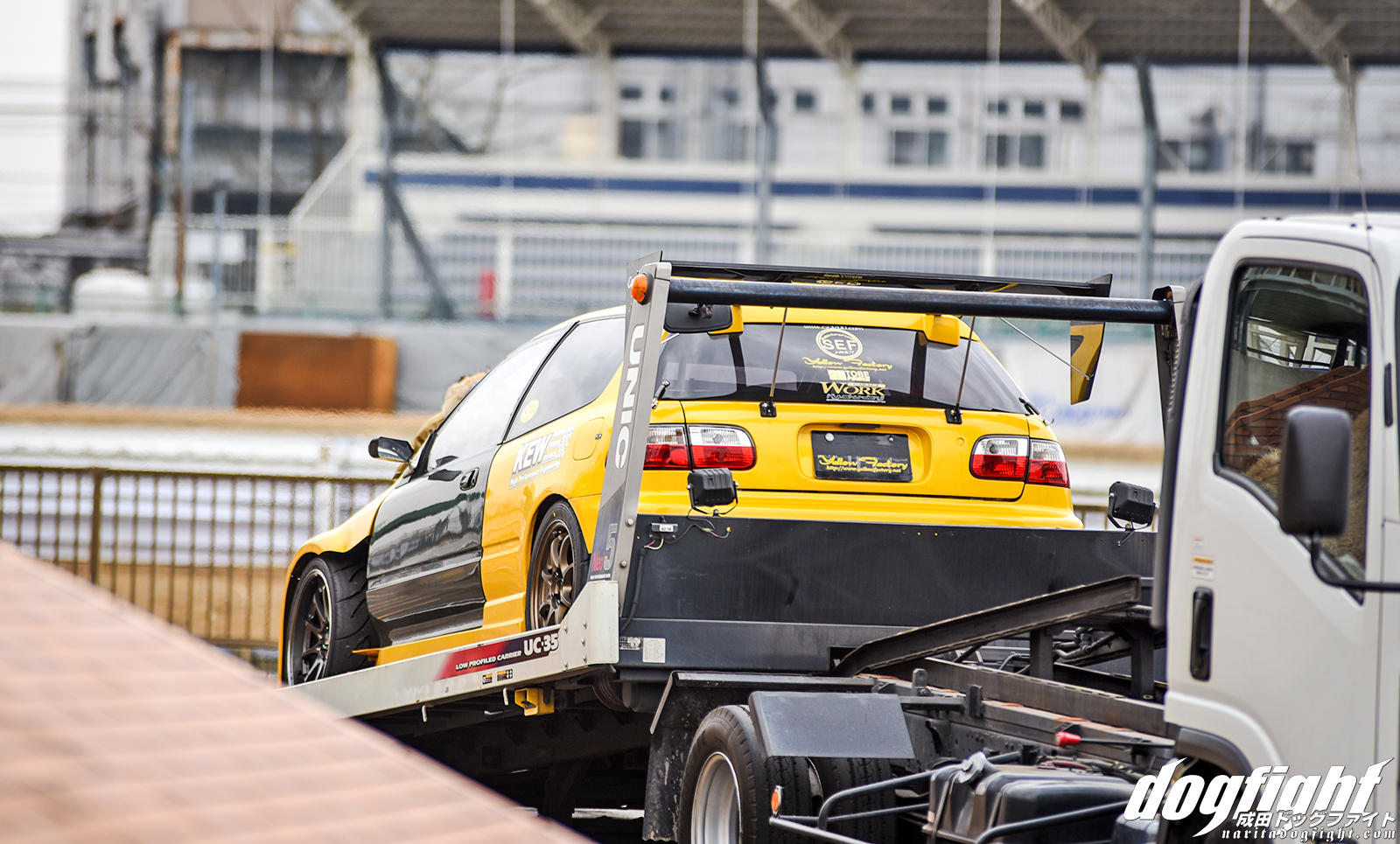 Thanks to Ryo for the chat and hope to see you out there again.