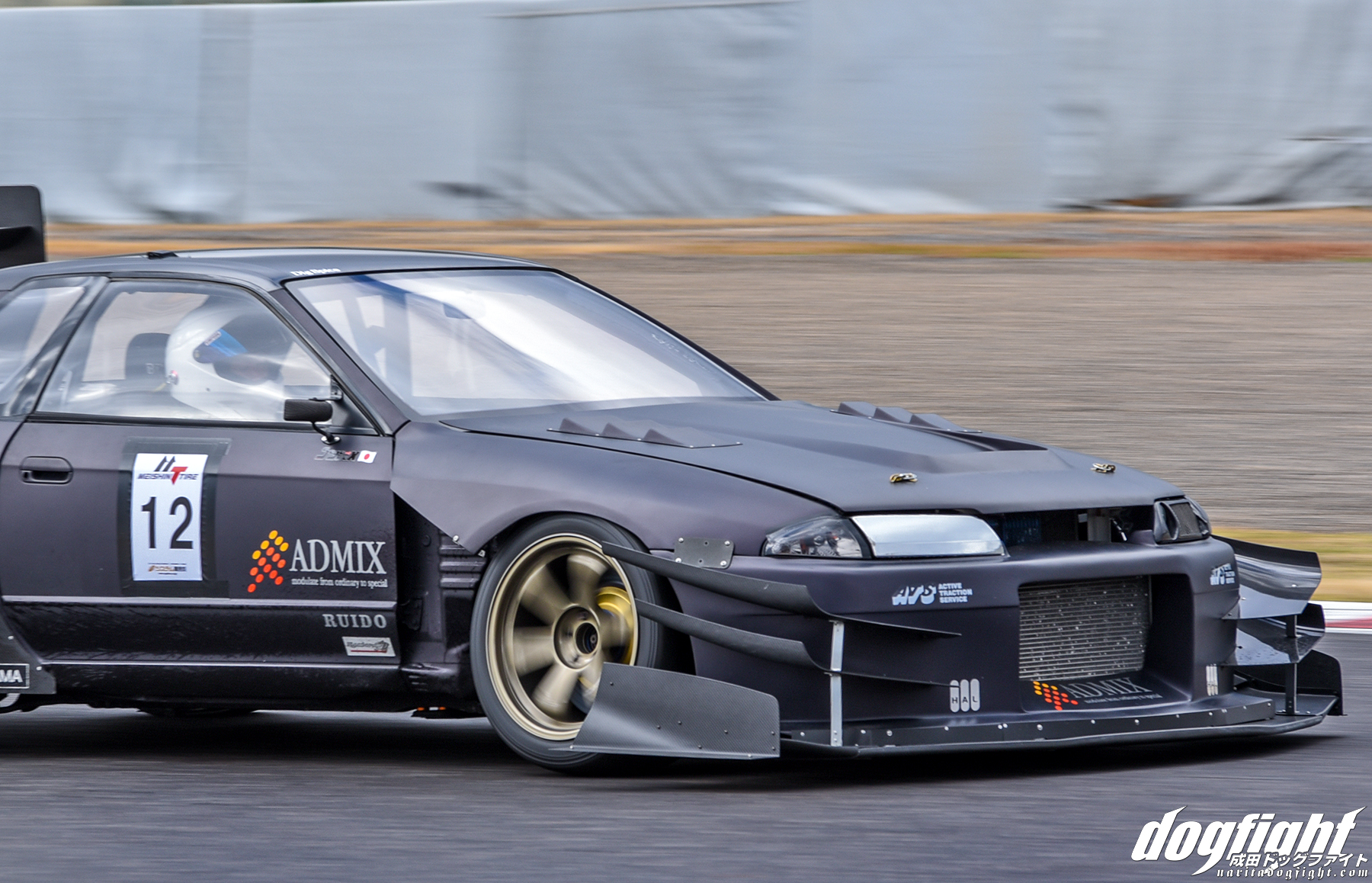 From the time I began to take an interest in Japanese Time Attack, I’ve had the chance to see Takanori Seyama’s R32 evolve year after year, slowly transforming into one of the countries fastest GTR’s.  With that one fact being known, you’d think that the car would be a household name for fans of the sport.  However, Takanori keeps such a low profile that the exposure of his build doesn’t quite hit the reach that others do.  It’s a testament to his humble character that, despite knocking on the door of 53’s, he’s a frontrunner that tends to stay in the shadows.

Owner and proprietor of Seyamax, the used automotive shop, Takanori spends his days surrounded by cars.  His modest Ibaraki based shop even provides a tuning service for his customers that want to enjoy their new car at ever-so-often track event.  In all seriousness, why shouldn’t it; after 20 years of racing experience I’d like to think he knows a thing or two about what works.  Nestled in the small town of Ryugasaki-shi, Takanori spends his days at the shop conducting business and studying data from previous events.  Like many people in his position, Takanori has enjoyed cars basically his entire life.  Owning several cars growing up, he eventually settled on Nissan as the manufacture of choice.  Today, he actively competes in various motor sports events in his Silvia S14, and of course most famously, his R32 GTR.

Having owned his GTR for nearly 20 years, you can imagine that it’s seen it’s far share of modifications.  Modifications that paved the way to its current state – something incomparable in the world of Skylines.  Built in part with his support shop, Admix, the build’s current state (for the year of 2018) is one that Takanori fought to a 54.118 lap time around TC2000; fast no matter what you compare it to.  However, now that the season is dwindling in Japan, the car is under the knife once again for a few choice mods that could theoretically make it the fastest GTR in the country.  Most people would naturally linger towards the question, “…so, will we be seeing this car in WTAC anytime soon?”  Takanori’s answer is that he is simply waiting for the right opportunity.  No doubt it is a crushing financial obligation to commit to.  Once he hits that benchmark though, I’m sure people will be very willing to help him get there.  Let’s take a look at some of the things that make this GTR one for the record books. 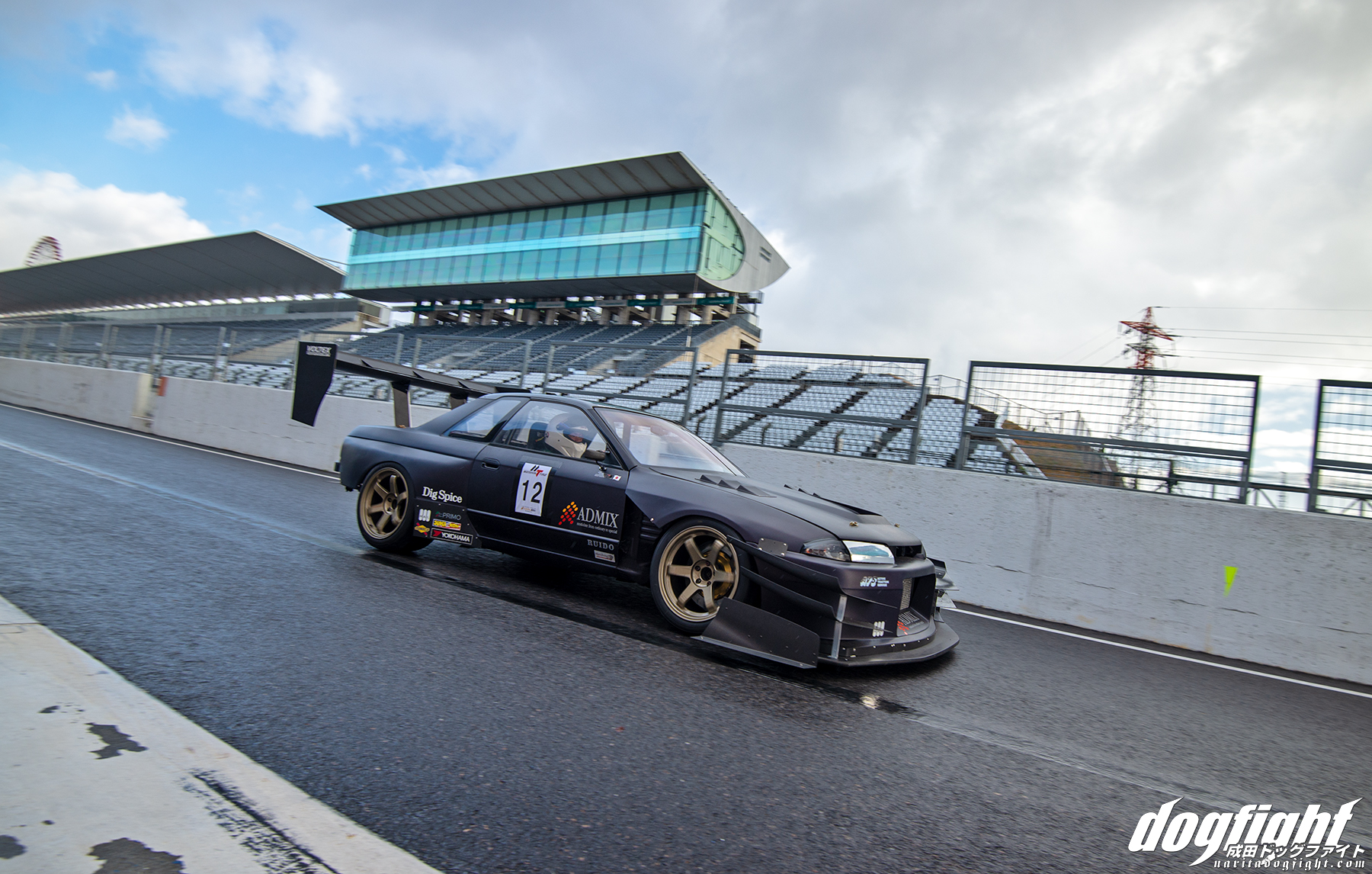 I think one of the most notable features of this car is that Takanori has converted the driveline to RWD; a dramatic change from the GTR’s off the shelf AWD setup, but one that is arguably much better for time attack.  We’re not talking removing a fuse and taking out the front driveshaft conversion either; Admix has completed this conversion properly.  The engine was removed, the chassis and subframe has been redesigned, the RB26’s sump modified, and of course the gearbox has been replaced with a sequential unit.  The car, for all intents and purposes now, is a true RWD vehicle.  The change created a bit of a challenge for Takanori, as he had to relearn how the car reacts in different situations.  One area in particular he has been concentrating on though, has been his braking; thinking there is time to be gained in his approach.  Just goes to show, no matter how fast you are, there is always progress to be made. 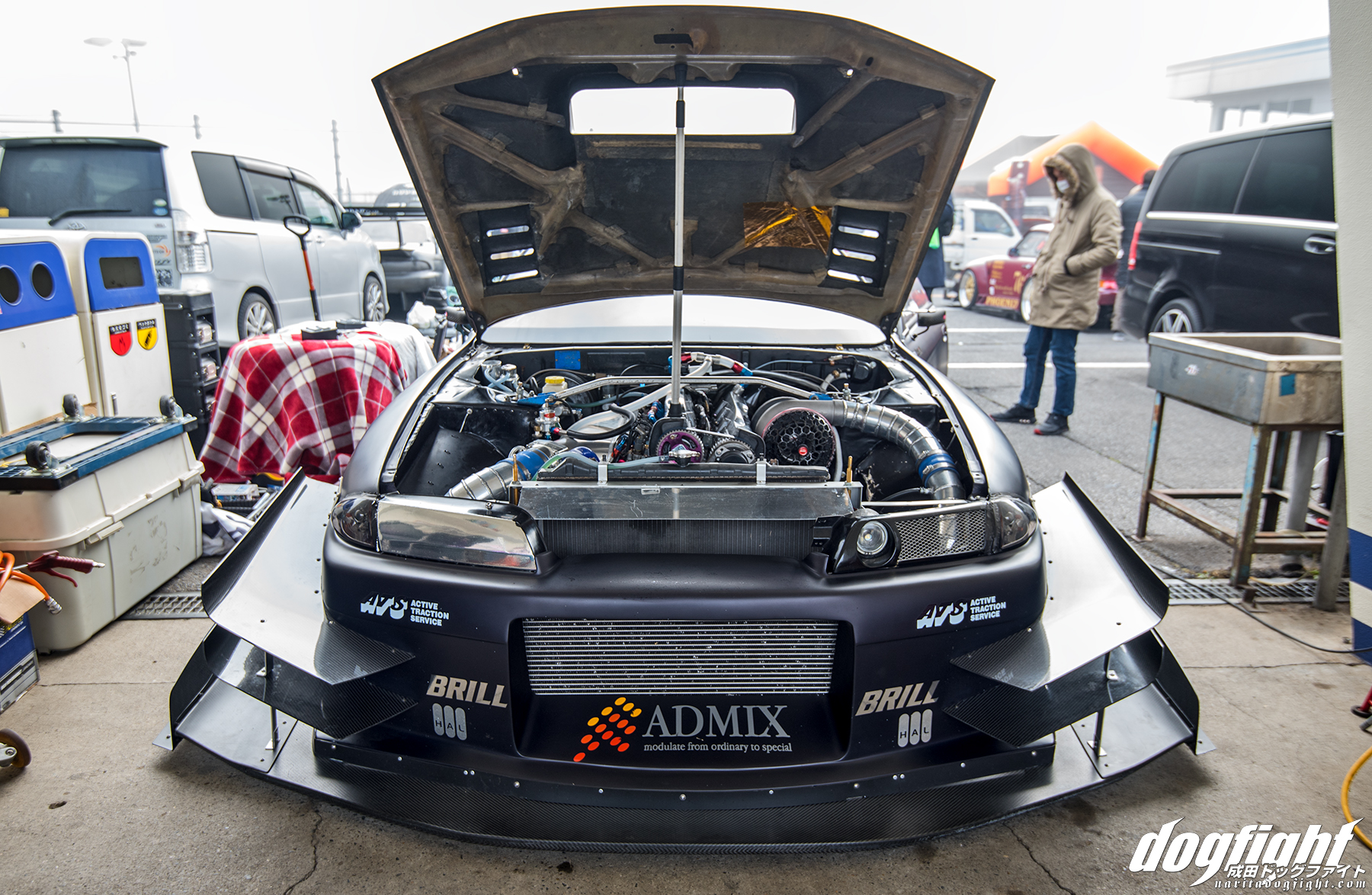 The current motor is a stroked RB26 built and tuned by Admix. The ever-popular HKS 2.8l stroker kit was utilized to bump up displacement from the RB. In last year’s off season, the crew at Admix did their best to enhance the safety of the setup as a whole.  The result was the aforementioned 54.118 second lap achieved in December.  The RB puts out a very reliable 820 horsepower, mainly provided in part by the Trust T88 turbine, which keeps Takanori plenty busy around Tsukuba’s tight circuit – especially powering out of hairpins.

Not one to be stagnant, this off-season holds many plans for the heart of the Skyline.  The Seyamax/Admix team plans to replace the RB’s block with a billet counterpart and bump up the power a bit.  Gaining exit speed is one thing (we’ll get to that later), but power down the front and back straight is something that provides a great advantage at any circuit. 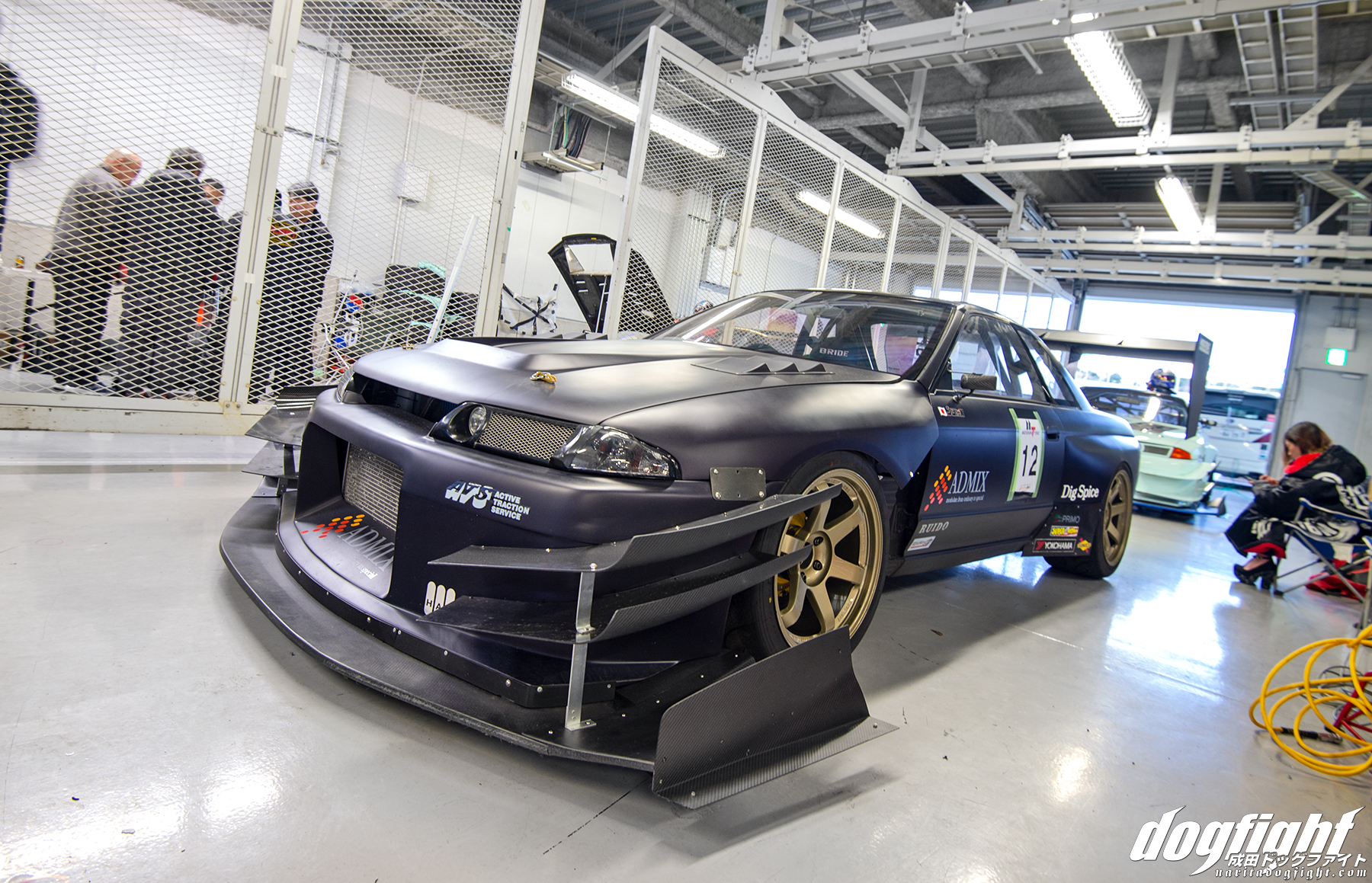 Seyama definitely understands the importance of the role that downforce plays in the motor sport world; especially with recent developments.  Luckily, he has good friends that personally know the president at Voltex and has recently struck a partnership with the aerodynamic powerhouse out of Suzuka and now has an entirely new front end as a result.  This setup not only helped him achieve his personal best lap time, but it takes the aesthetic of the GTR to an entirely different level. 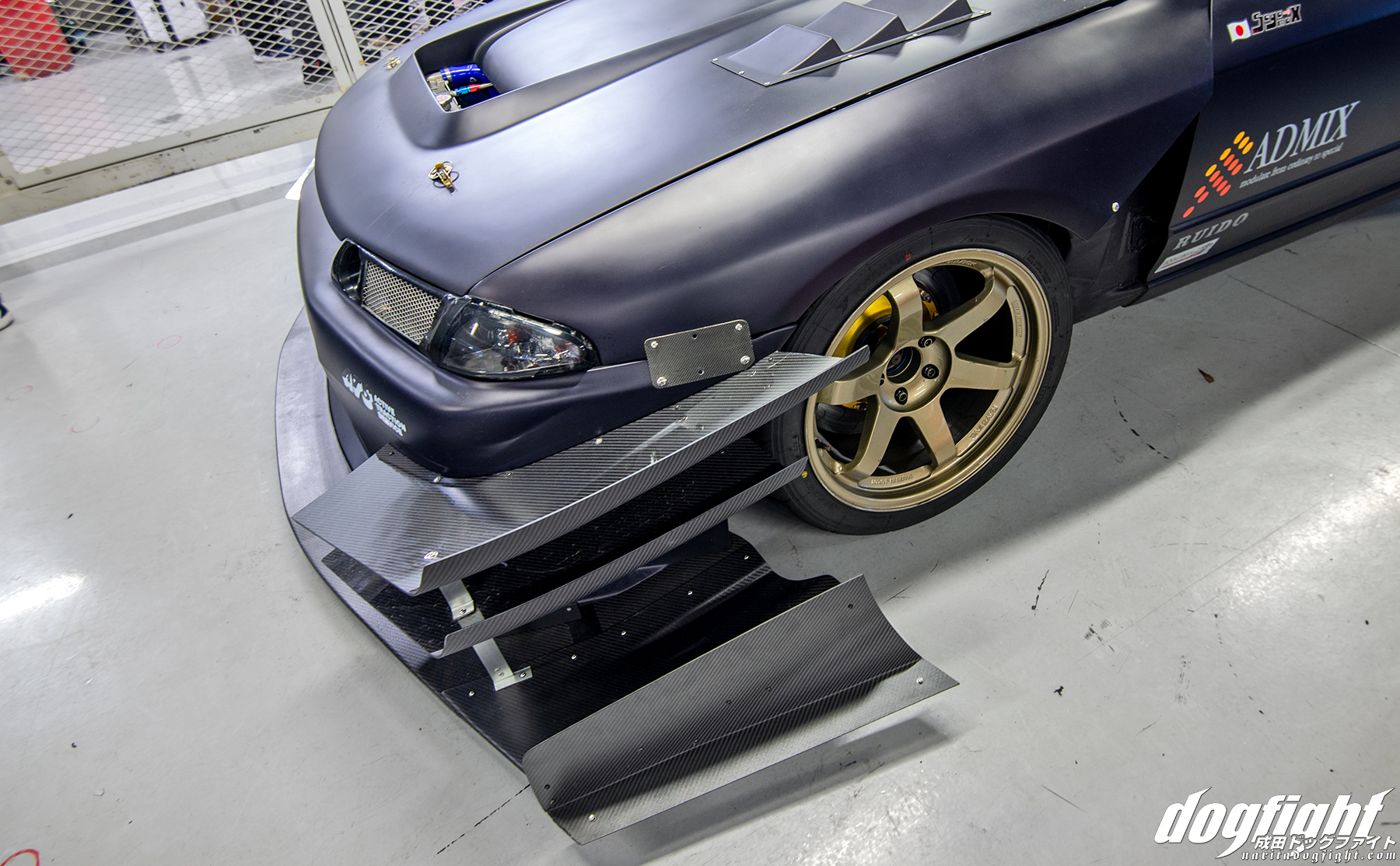 The full carbon, ducted splitter, and ancillary canard setup greatly increase the cars front end downforce.  Voltex doesn’t technically produce OTS parts like this for any GTR, but it’s with Takanori’s good ties with the company that he is able to commission parts like this. 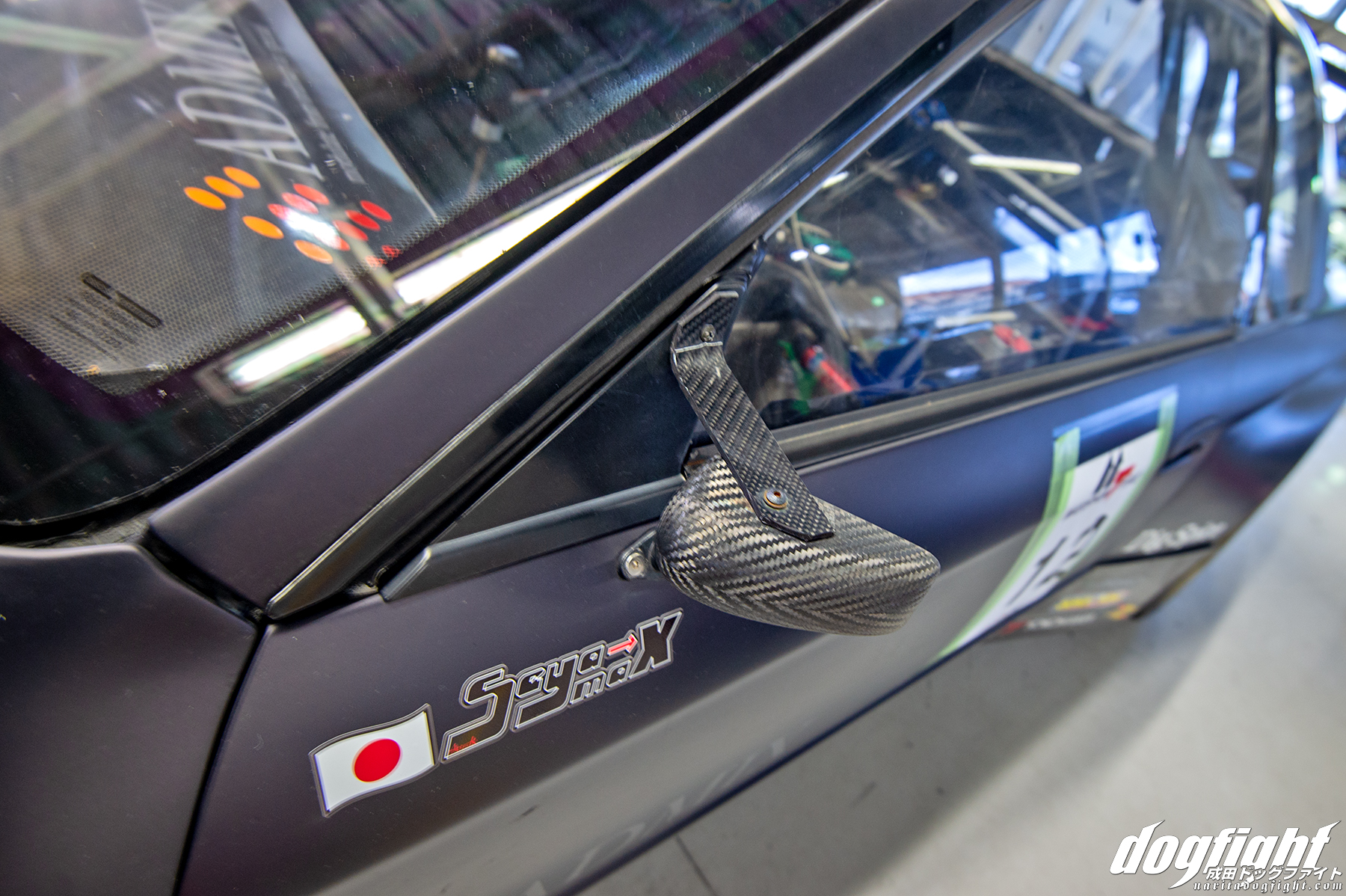 There are other little bits that make the exterior of this car very unique as well – like the little side mirror supports he’s fabricated to hold the mirrors in place at the breakneck speeds achieved on the straight.  Suzuki under also has something like this on his S15.  No doubt that over the summer, I too, will emulate this characteristic on my personal car (in my defense, my passenger side mirrors does actually move on track). 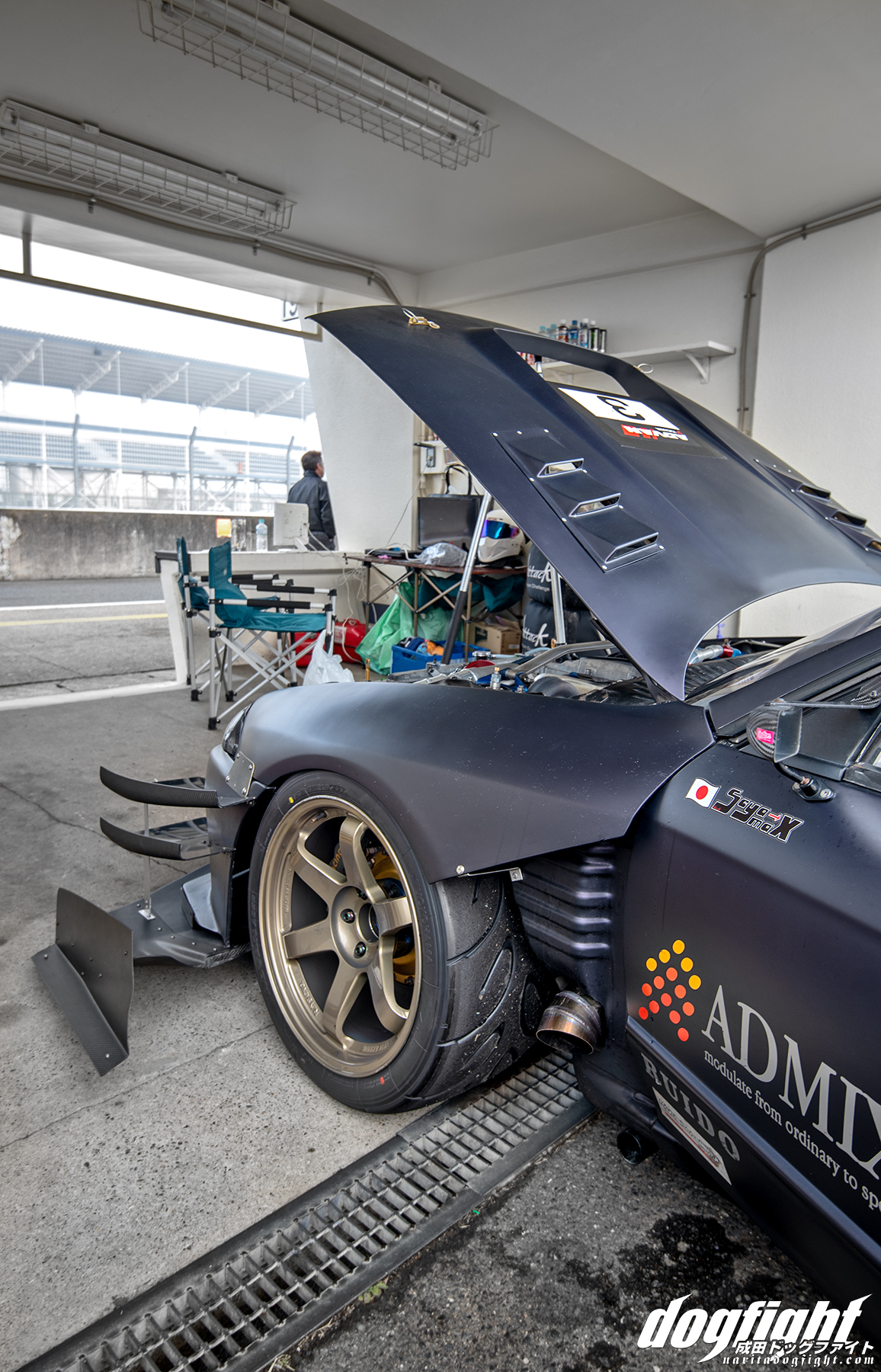 From this view you can see the 3-dimensional aspect of the front splitter.  Also, no big deal, the exhaust dumping out right after the passenger side tire.  God damn this car is cool. 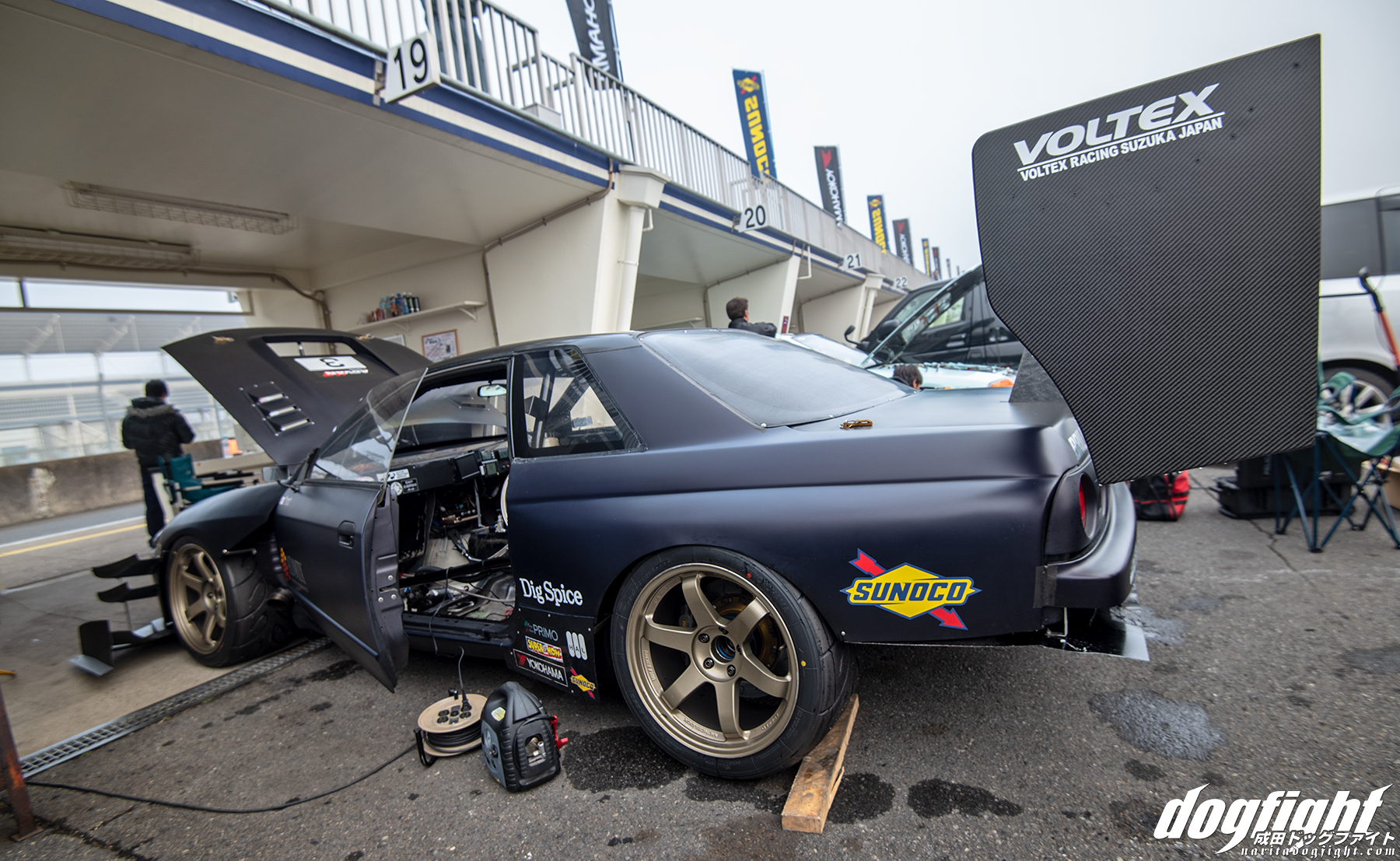 Voltex was also employed to handle the aerodynamics at the rear of the car.  The triple-element GT wing that resides on the rear is adhered to the cars chassis to make the most out of it’s presence.  The rear bumper has been trimmed up and flattened with a single sheet of carbon. With the exhaust out of the way, it leaves the entire floor prime for modifying. 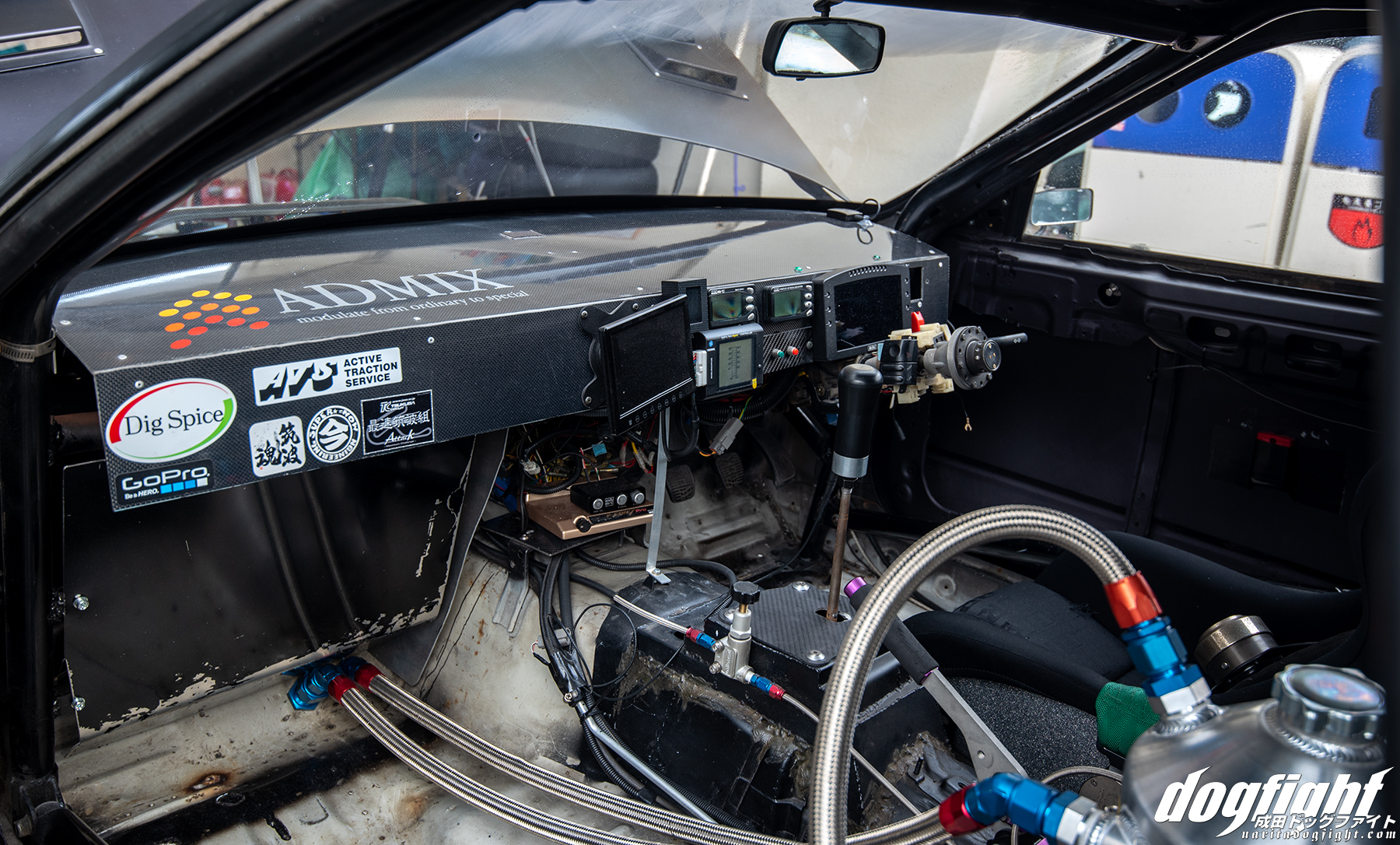 The interior leaves nothing to the imagination.  Akin to that of a fully nude woman (or man?), there is nothing inside the cabin that isn’t necessary.  The carbon shell of a dash houses a good amount of electronics, including the rear view camera monitor, HKS Circuit Attack Timer, boost controller, and Motec C187 display.  Everything he needs to both monitor and log the data from his sessions on track.  A Bride full bucket seat keeps him in place around the turns. 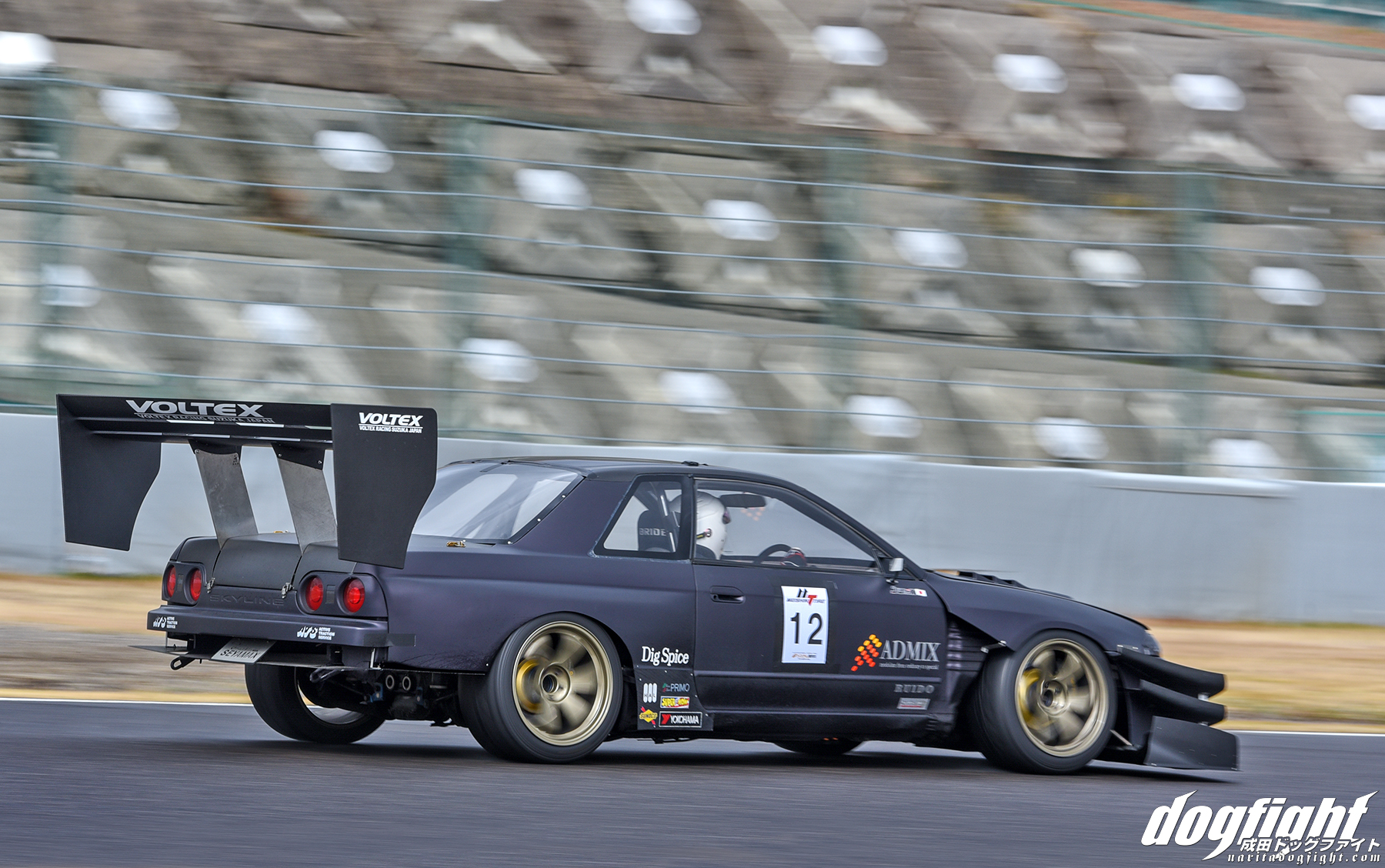 There’s no denying this car’s presence on track.  Whether it be the widened stance, it’s menacing flat black exterior, or simply the fact that it’s among the fastest on track anywhere it goes, but there’s just something about it.  It gives off an aura of pure, raw motor sport.

18″ Volk TE37’s in bronze adorn each of the four corners of the car and are wrapped in the obligatory Advan A050 for maximum grip.  A custom damper provided by Admix, utilizes HAL springs in order to give the car ideal dampening for each track. 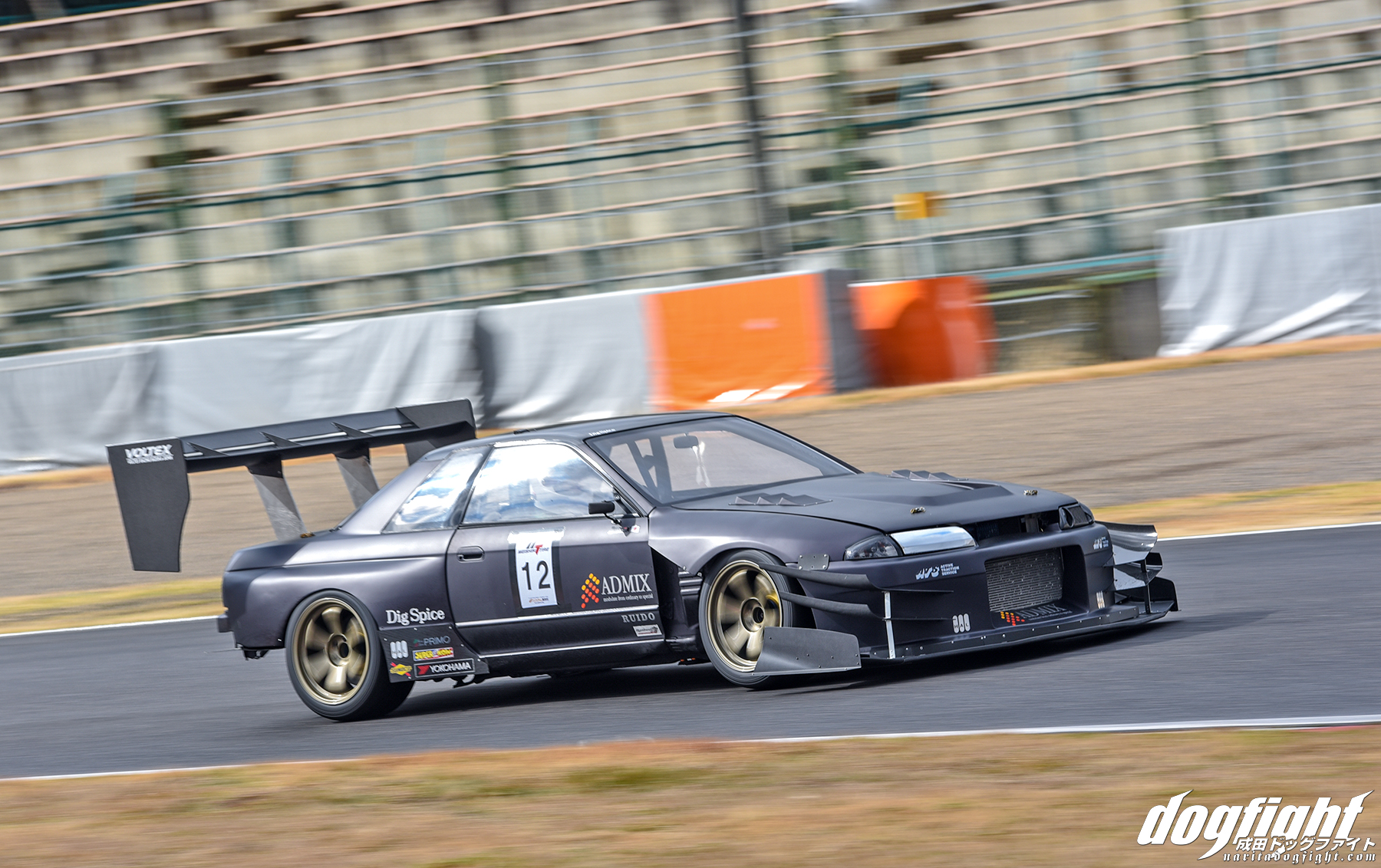 The entire package as a whole is quite impressive to watch on circuit. 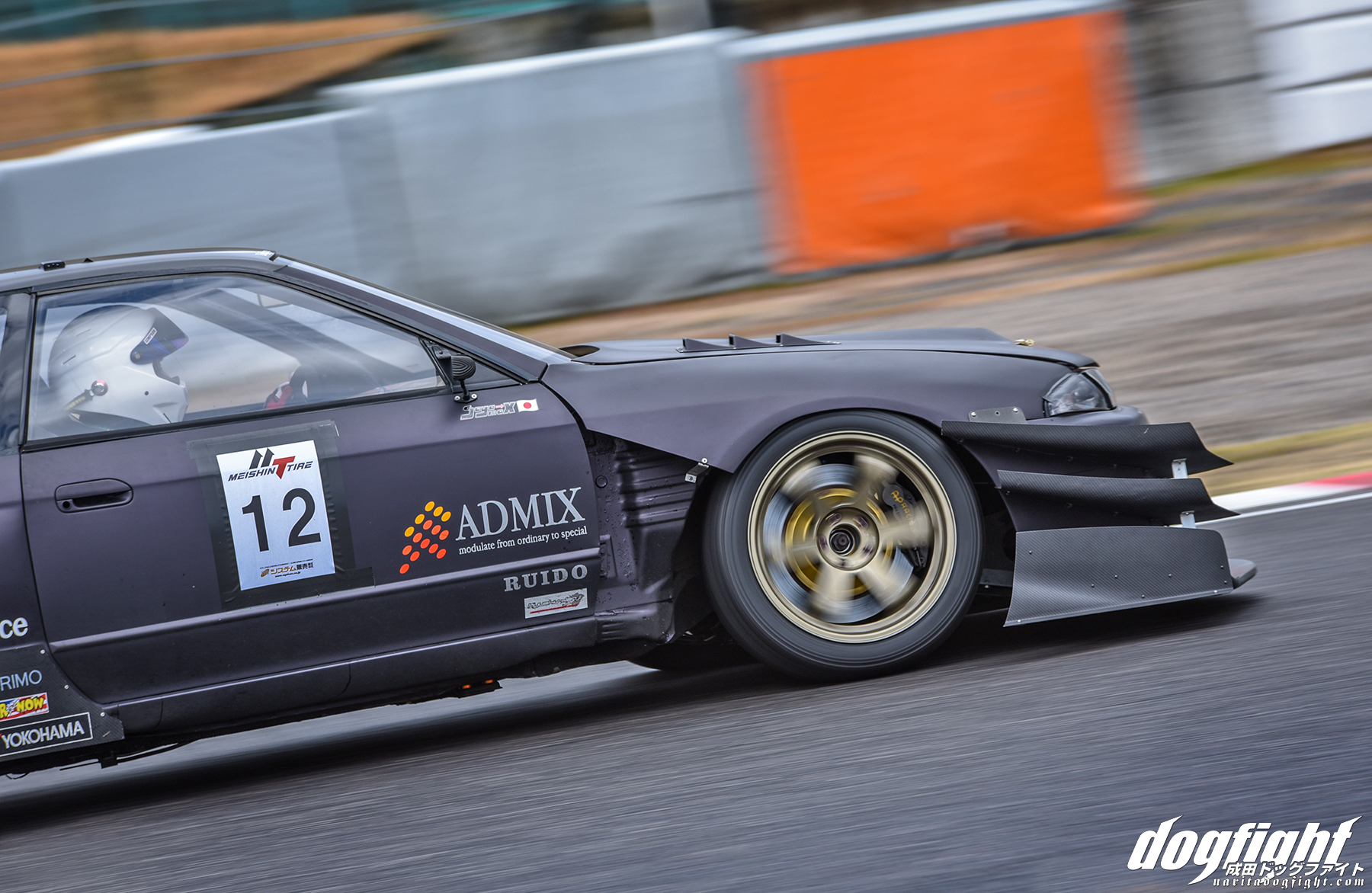 I can only imagine how it will perform with the new setup. 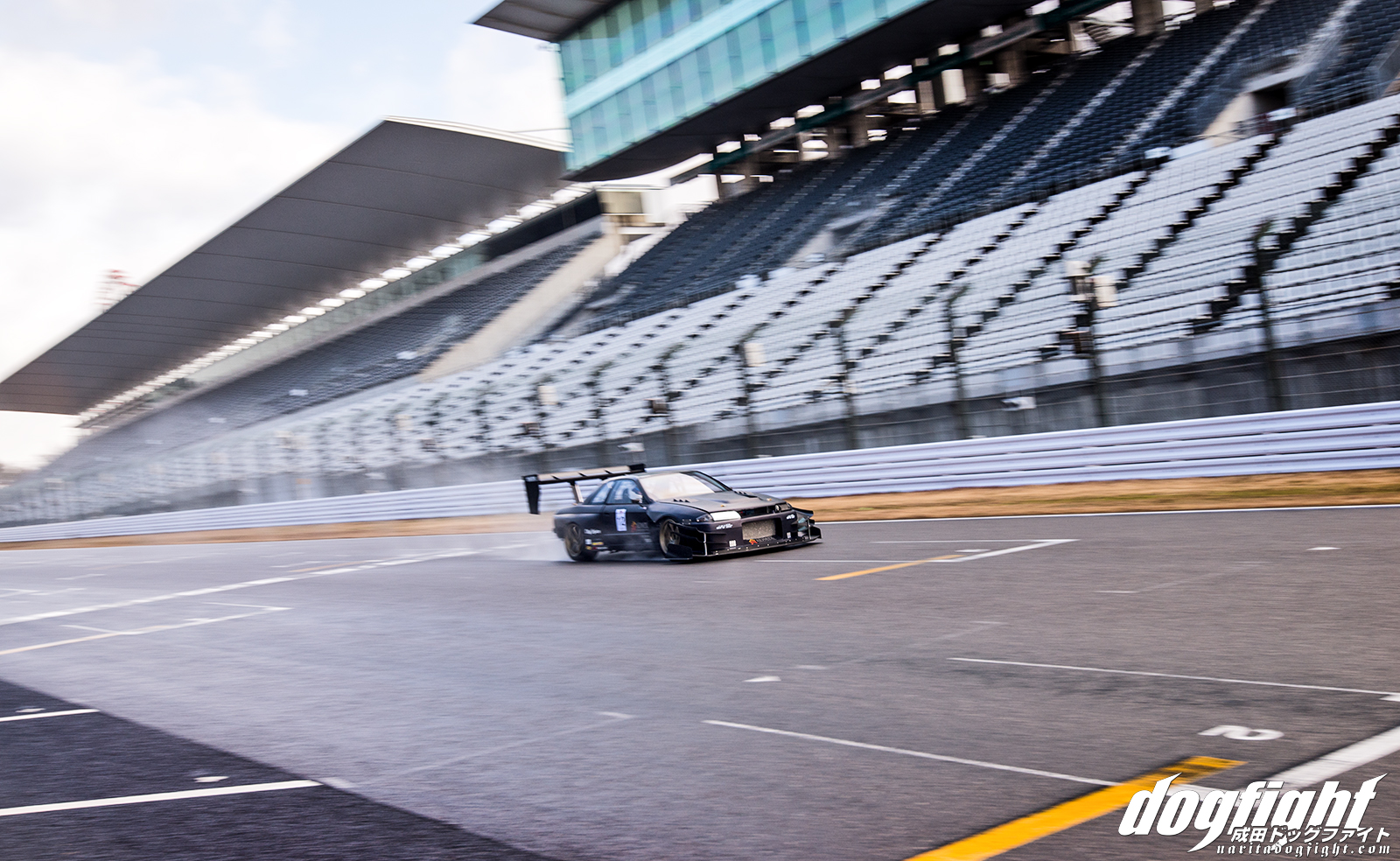 When Takanori is not strapped into the cockpit of his GTR, he’s not sitting idly by.  In fact, one of his other passions is motorbikes.  He has a Honda CBR1000RR and Kawasaki Z1 – needless to say he lives for speed.

As a comical side note, I like to ask everyone that I meet in the Attack scene what their favorite food is, and typically they all give pretty specific answers for each of their preferences.  Takanori, on the other hand, had a pretty apathetic response: “There is not much commitment to food.“  Spoken like someone who is preoccupied with going faster… 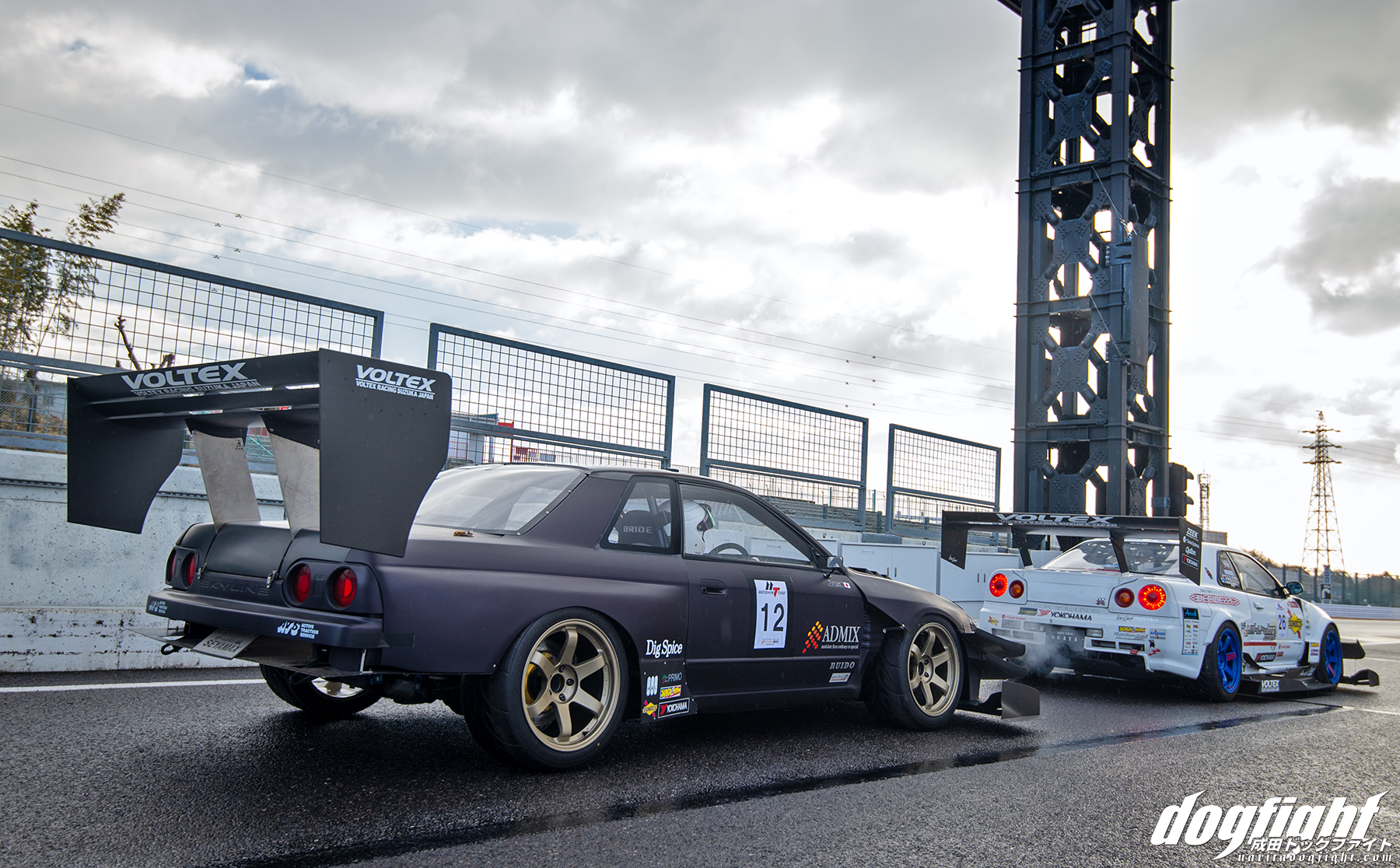 We’ll keep a close eye on Seyama and the crew from Admix to see what 2019 brings – I know we have a lot planned for next season as well.

When we select drivers and shops to be part of our Frontruners collaboration each year, we don’t just reach out to anyone.  It’s with a very scrutinizing eye that we judge our partners, and welcoming Takanori Seyama to our team from 2018 was a partnership that clearly checked all the boxes.

Check out his fast lap from the end of last year: