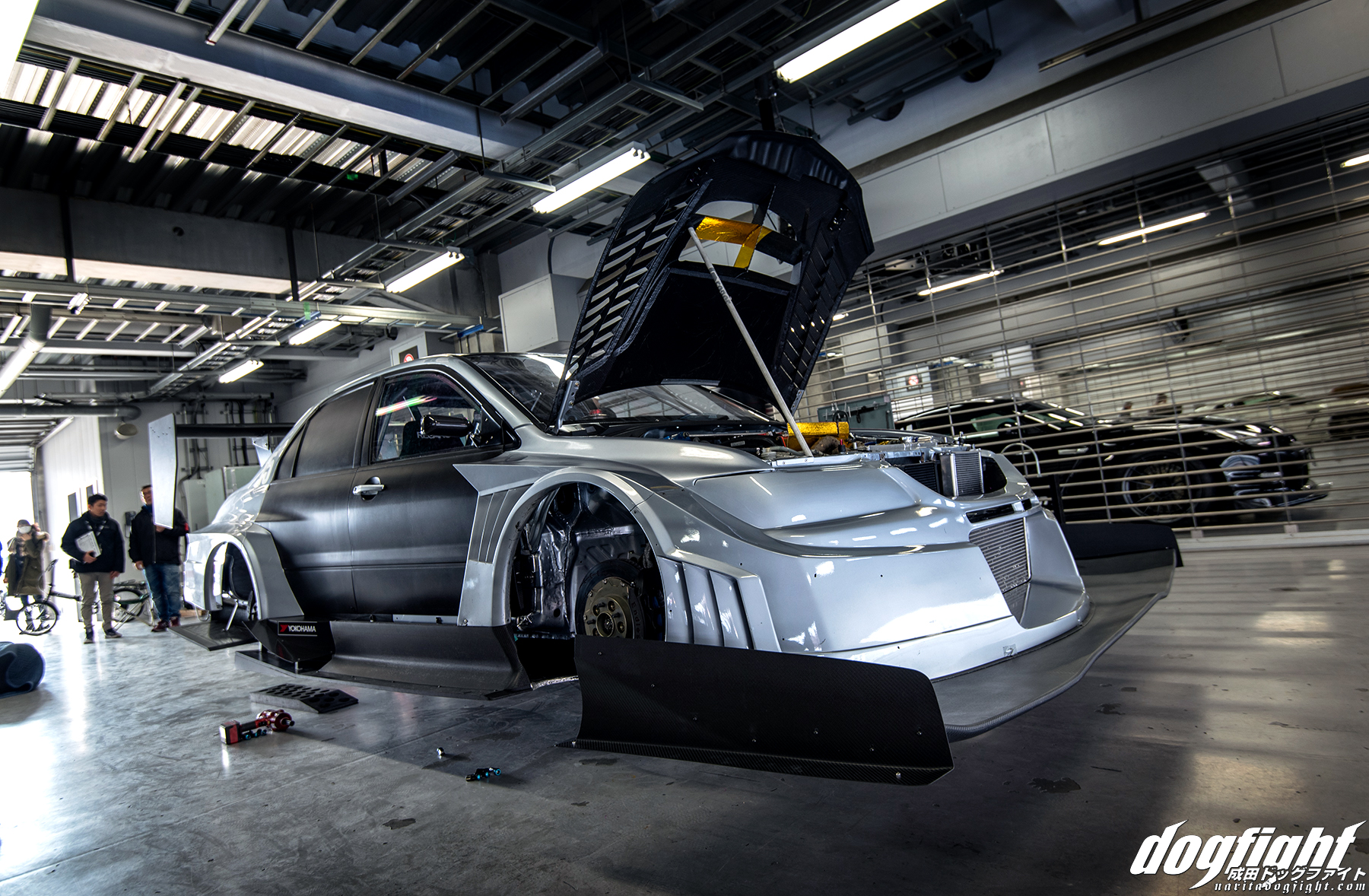 A prominent influence in the Mitsubishi tuning domain, Garage G-Force has spent the last decade fighting to solidify a name for themselves as the number-one Evolution tuning company in Japan.  That fight, however, hasn’t been easy.

Driven by the hardened work ethic of the owner, Naohisa Tazawa, G-Force has been involved in dozens of high-end builds throughout all of Japan, as well as internationally. Tazawa-san has been tuning cars for the better part of 30 years, until he made the decision to branch off on his own. With the opening of Garage G-Force, he set out to become a leader in his own right.  Without a doubt, that goal has long since been achieved, and I feel like the culmination of his work is displayed prominently in the shop’s latest demo car; their Voltex-clad Evo 9.

We first saw this build at the end of 2014 during the RevSpeed Superlap Battle at Tsukuba.  Back then, though, the car had a very different look to it.  The shop had set out to build a dedicated time attack car; one that would showcase their prowess as a tuner, and get them noticed once again in the ever-growing motor sport.  G-Force has always had a close working relationship with Varis, so it was natural at the time for them to equip the car with a catalog of Varis parts.  It’s worth noting too, at that time the car hadn’t yet been tasked with breaking records at Tsukuba and other tracks around Japan.  A few months later we saw it again at Fuji Speedway during the 2015 HKS Premium Day event. 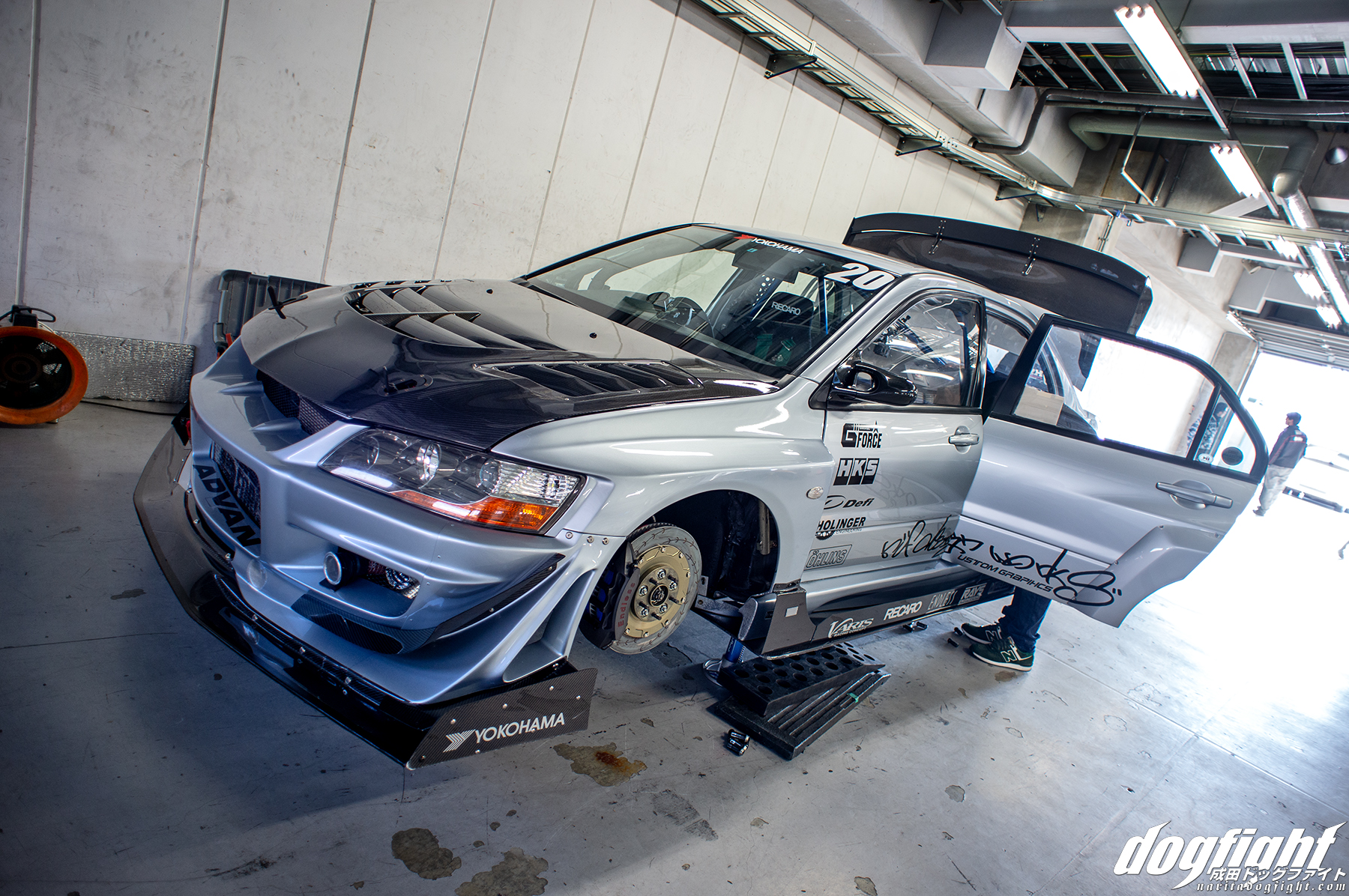 The development of the car sort of escalated from there on.  I would say the change was gradual, but it really wasn’t.  The car didn’t stick with this setup for long, as the team at G-Force quickly learned that although fast, if they were going to be competitive among the fastest, they were going to have to rethink their end-goals. 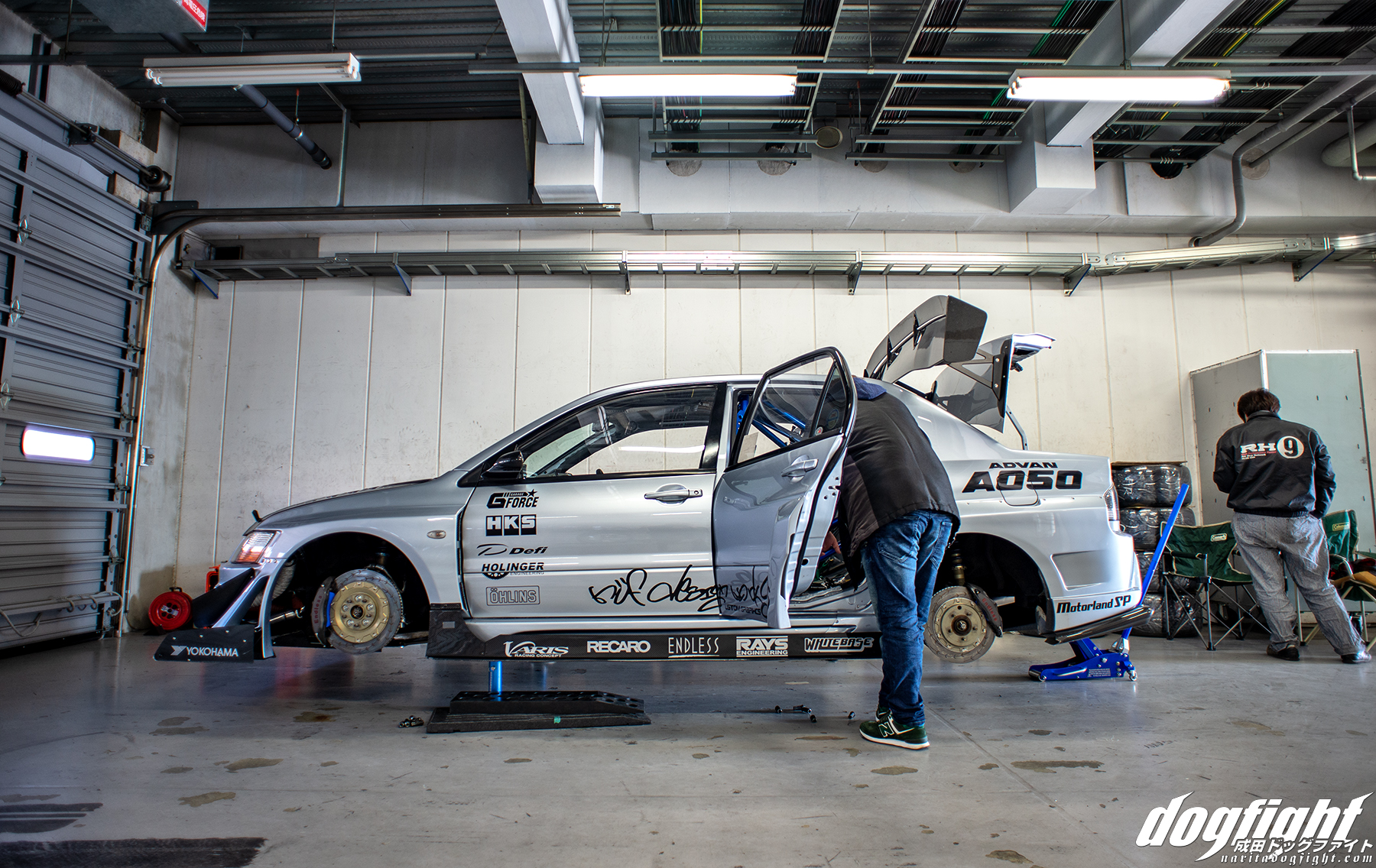 Albeit a fairly new build at this point, Tazawa saw that lapping Fuji in 1’42.154 was well off-pace of the others in the same class.  Even with famous hired gun, Taniguchi behind the wheel, they just couldn’t keep up.  Certain they had developed a good foundation, they took the rest of the year to plan out just how far they wanted to take this build. 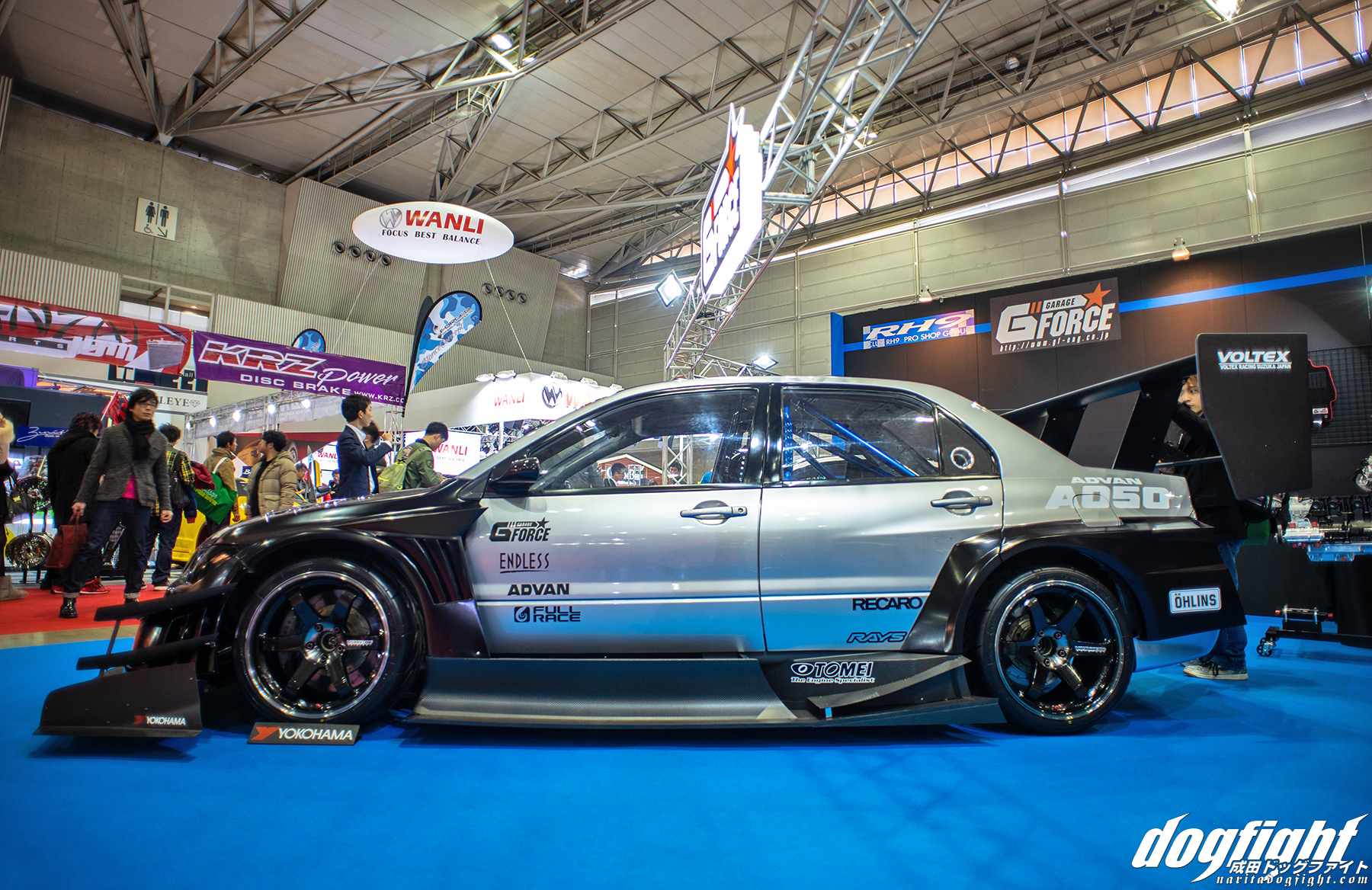 The start of 2016 saw the Tilton EVO debut of a brand new body kit by the aerodynamic powerhouse Voltex.  It wasn’t long after that the Garage G-Force build had donned the same kit, and unveiled their intentions at Tokyo Auto Salon in January 2016.  The exterior may have changed dramatically but the motor setup itself had remained untouched.   In it’s current 2016 state, the 4G63 produced a healthy 730 horsepower at around 7500 RPM.  A Holinger sequential transmission mated the power to the driveline and made shifting gears much faster and more efficient.  A set of custom valved Ohlins coilovers remained their choice to handle the corners of any given track.

2017 saw testing that led up to a very exciting 2018 Option Super Lap at Fuji where Taniguchi was able to secure a lap in the 1’37 second range; almost a 5 second improvement from their first go.  It was an incredible jump in timing that assured the team they were on the right track, and most of all, were now in contention to be among the top 3 at Tsukuba. 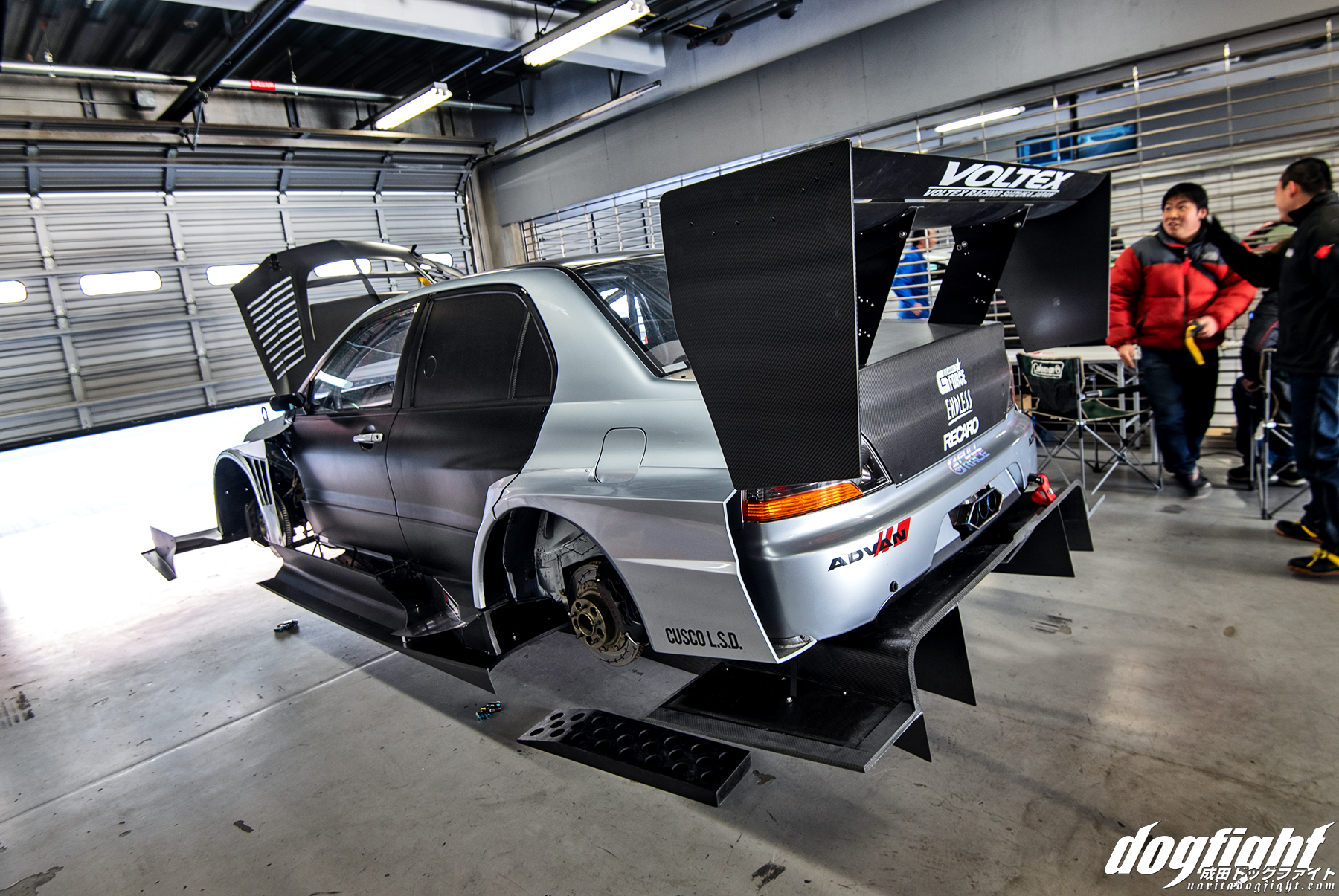 The car was fully assembled, with a new custom roll cage, painted exterior, carbon doors, and a handful of new additions; it really did look better than ever.   The interior was completely stripped and a carbon dash put in place to house the electronics and monitor.  Comparing shot for shot the look of the car from just two years ago gives you an idea of how quick development in time attack at this stage moves.  It wasn’t long after that the team took the car to Tsukuba and swiftly obliterated their standing time of mid-55 seconds. 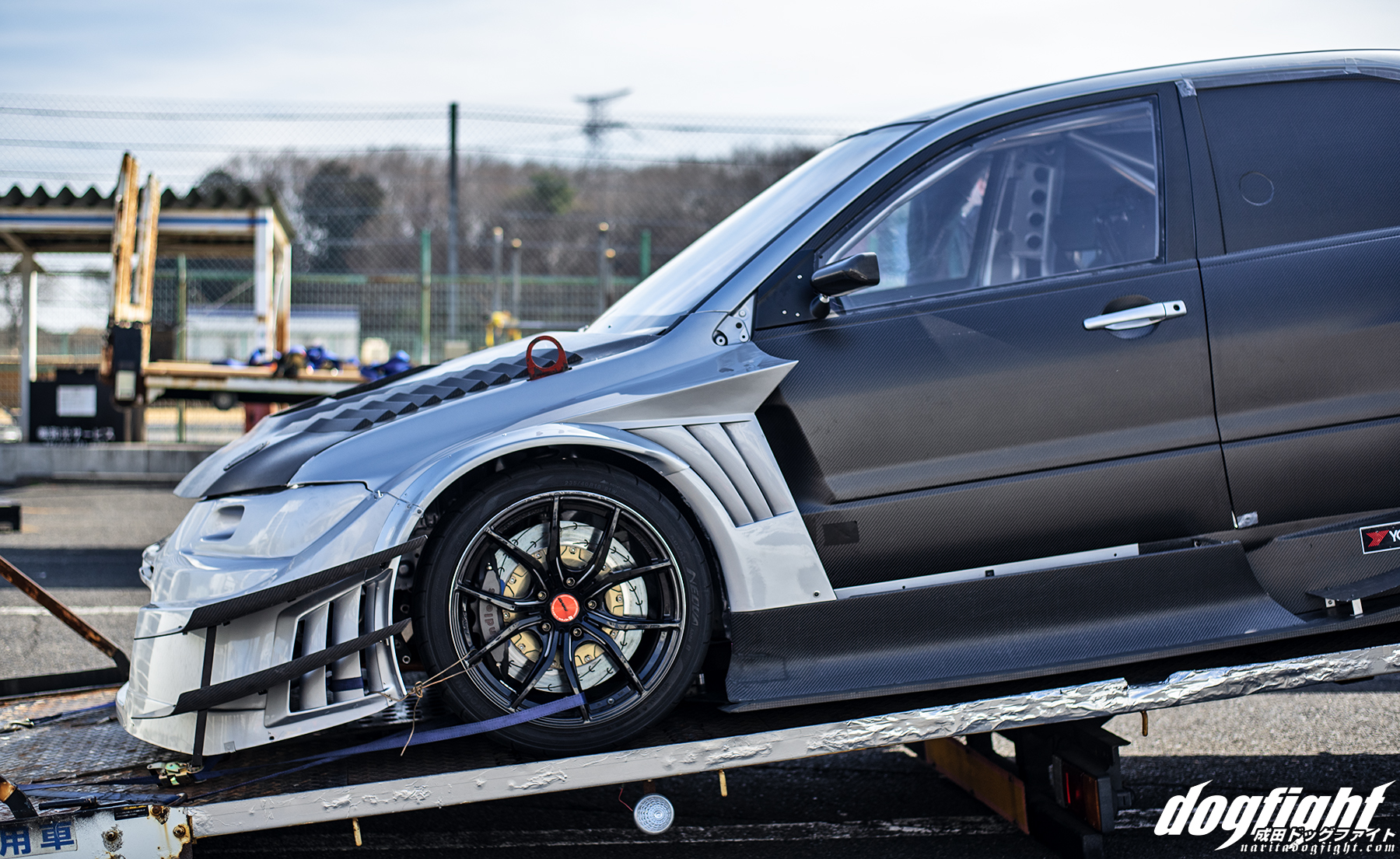 Present day, at first glance, you wouldn’t see much change in the car.  The Voltex kit has been proven lap after lap to be providing adequate and balanced grip after two years of tuning.  We saw the success that Ando and team Escort has had with the kit, although they’ve since began making their own changes, the bulk of the design remains Voltex.

It’s what you can’t see, specifically, that has driven the team to a staggering 52’391 second lap around TC2000.  Years of data acquisition and fine tuning the motor and suspension lead Taniguchi and Tazawa that the car is capable of a 51 second lap as-is. 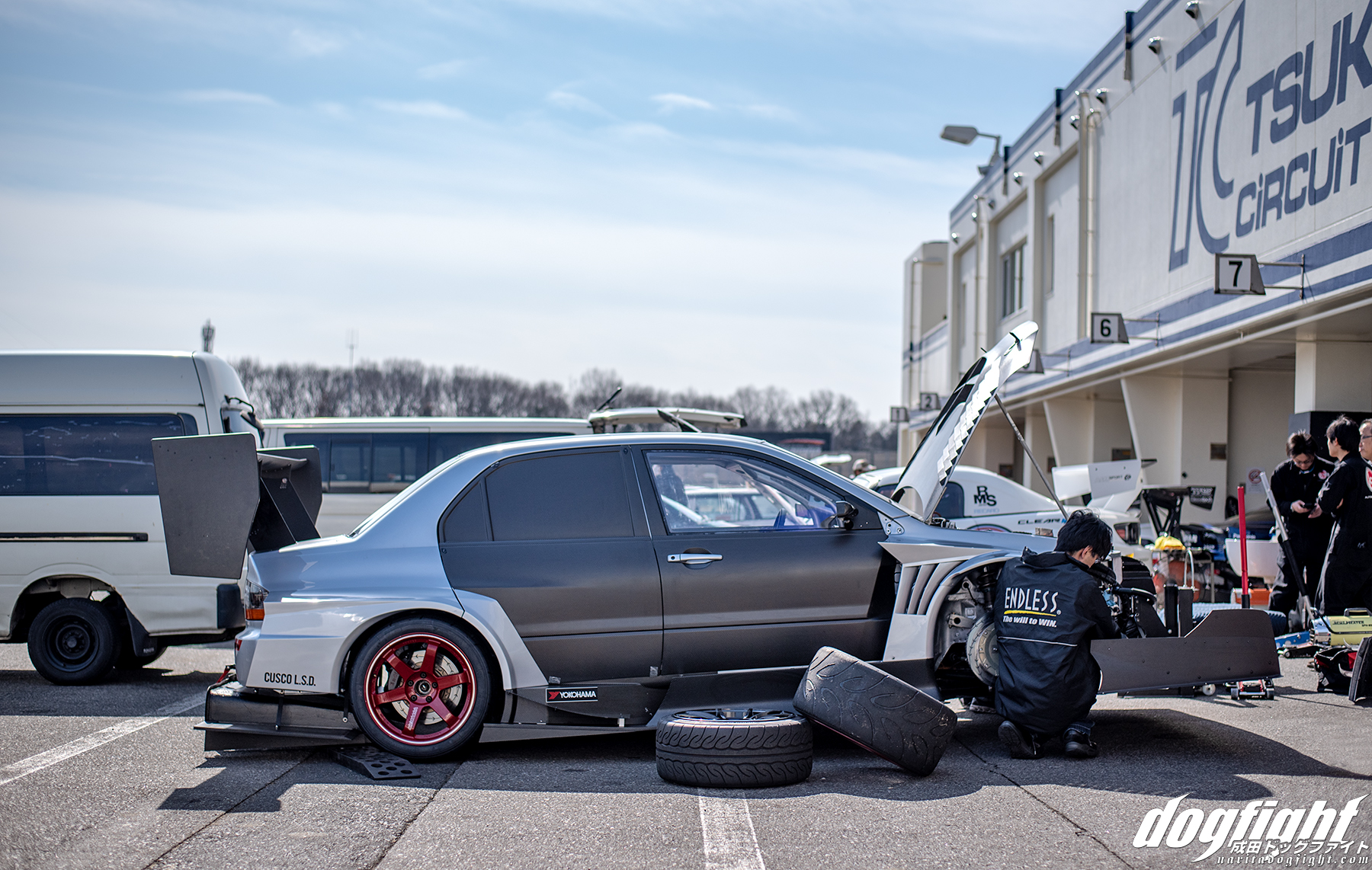 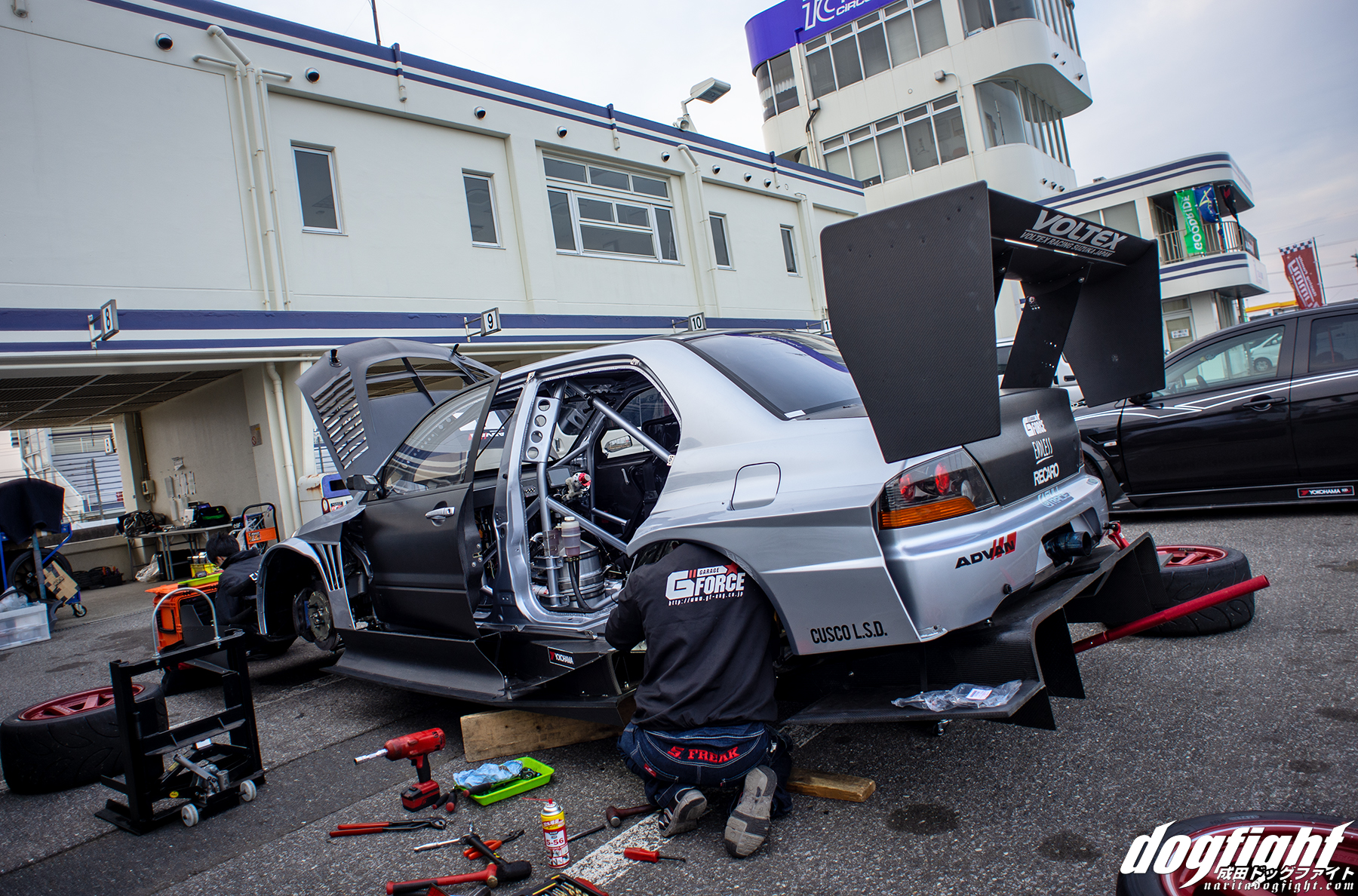 A professional outfit like G-Force has the means to provide a full staff of support for each event.  At this year’s Attack Tsukuba Championship, the employees of the shop were on hand to prep and monitor the car has NOB took it around the course. 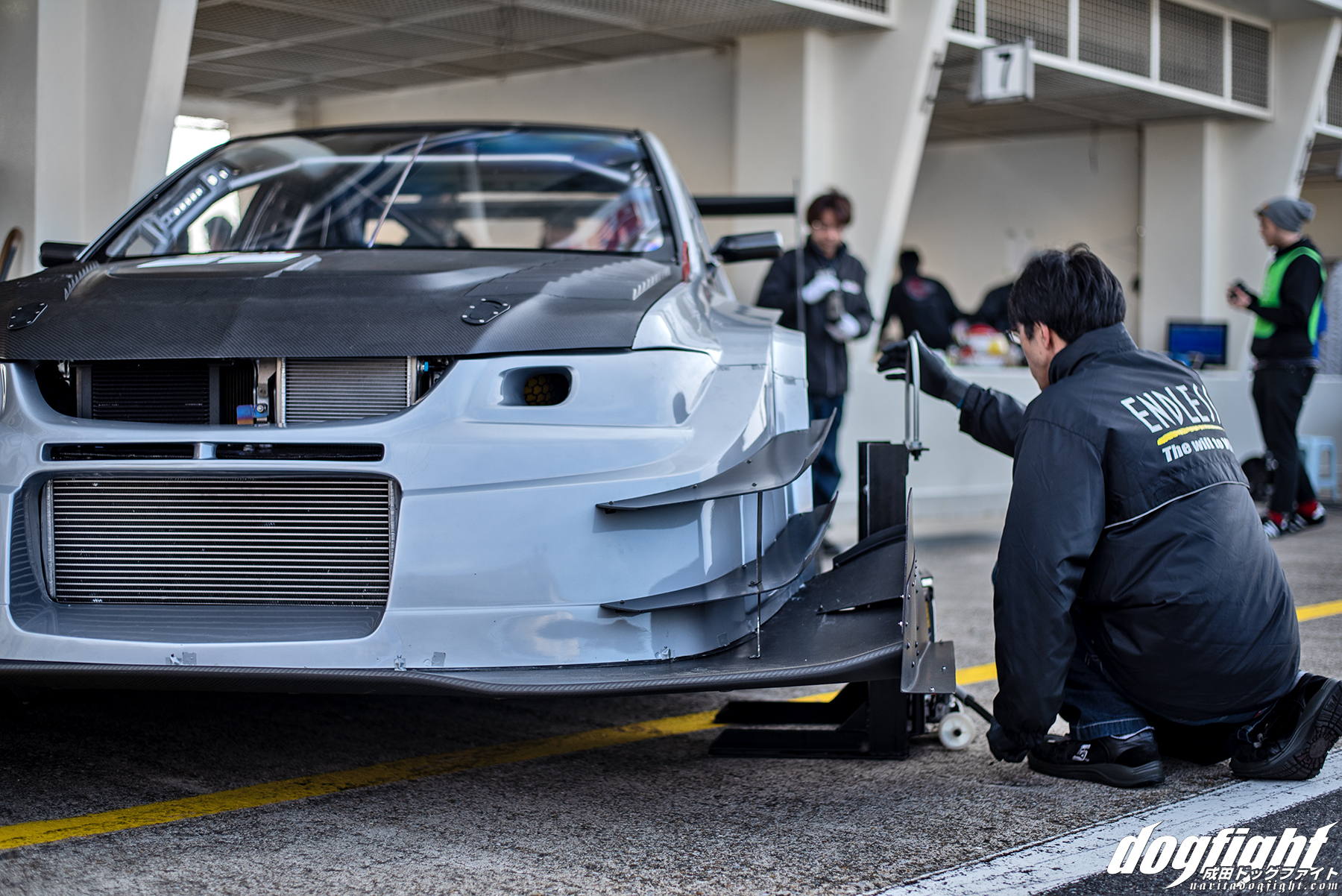 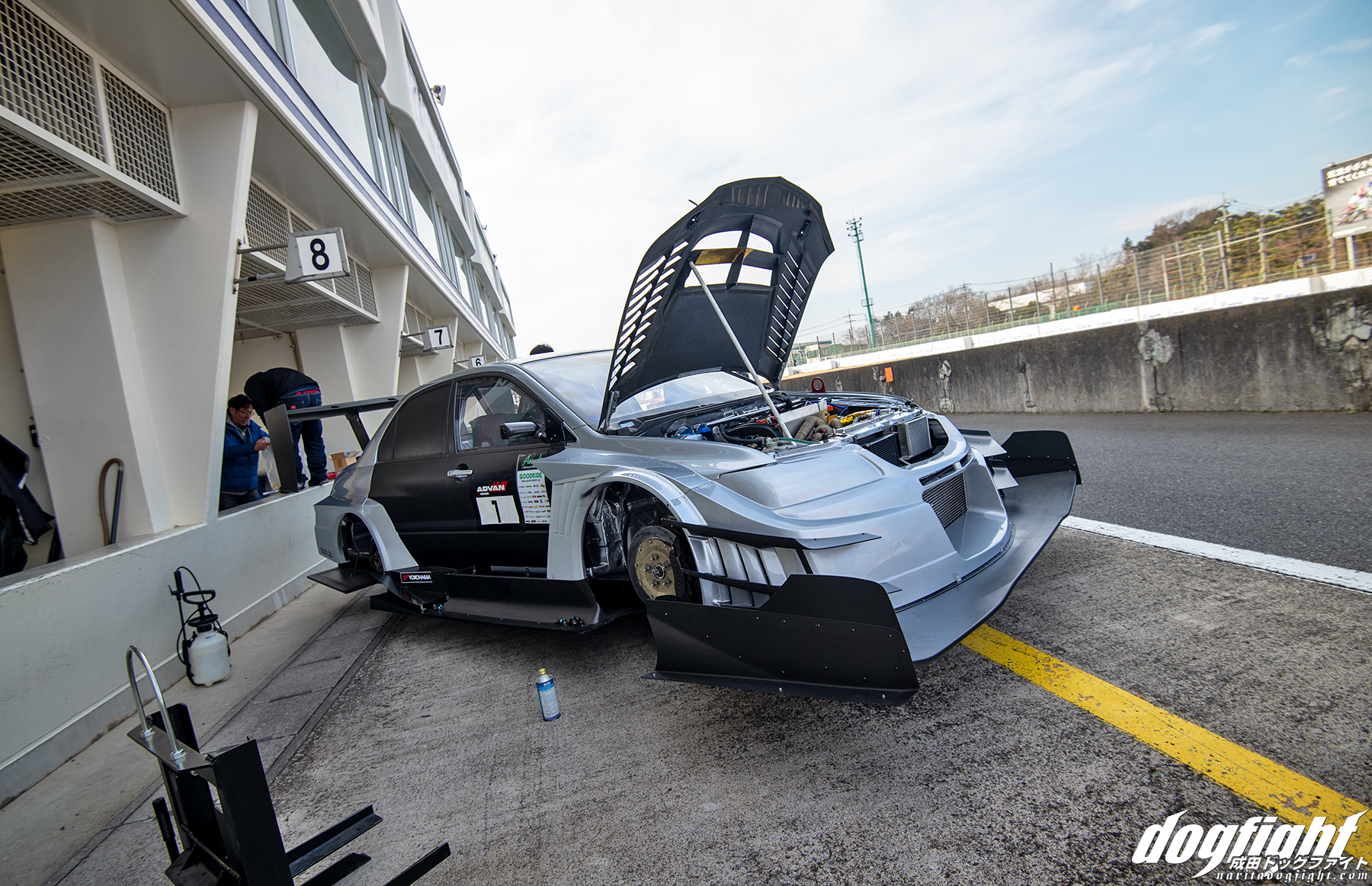 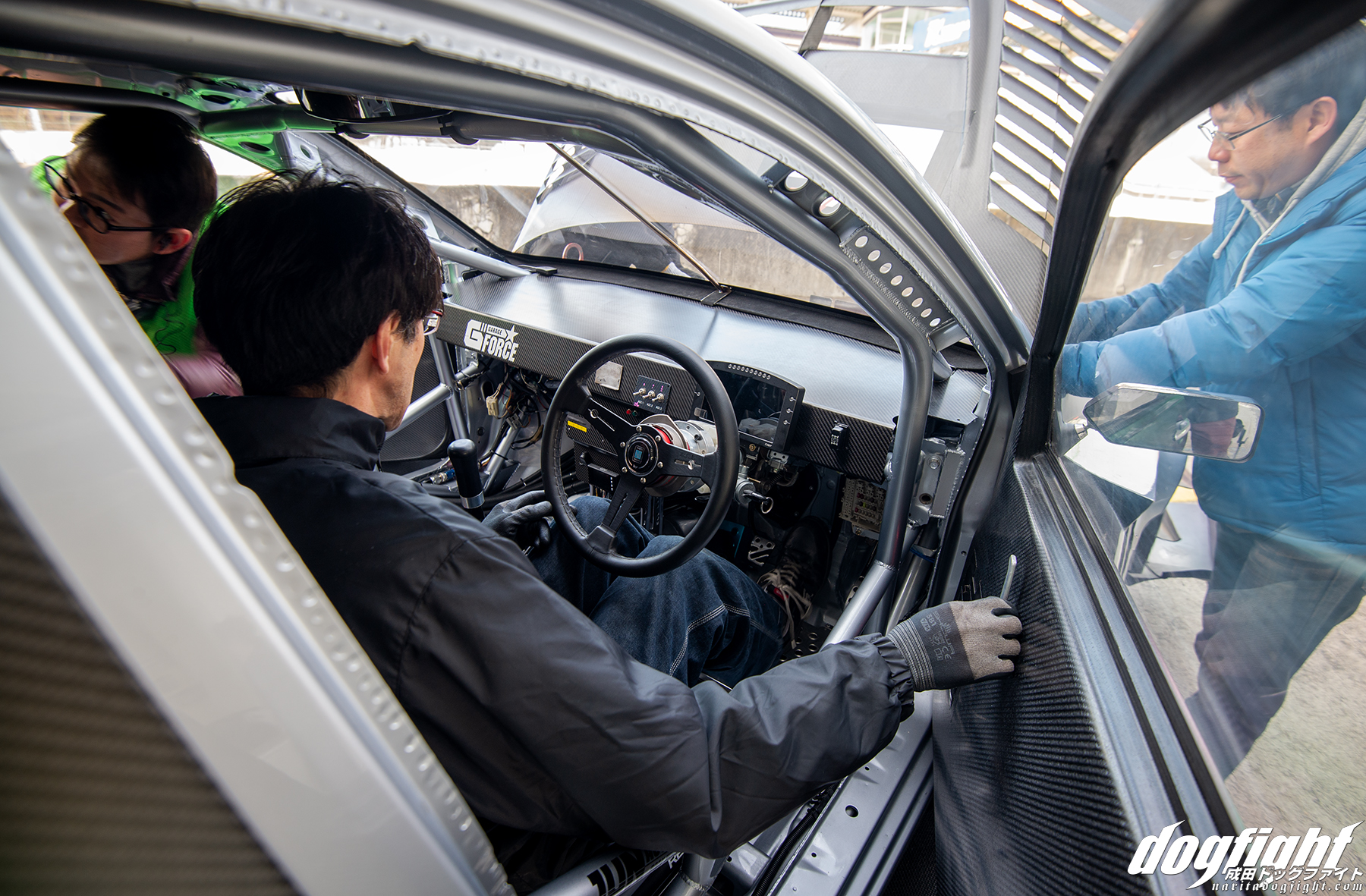 The one piece of tuning that is fast becoming the norm is the use of paddle shifters.  Recent advancements in management software have made shifting as we know it somewhat obsolete.  With the Yamazaki Evo still utilizing the traditional shifter, they will be among the last to adopt a paddle setup – as there is no doubt they will eventually move in that direction with the car already being tuned with a Motec ECU. 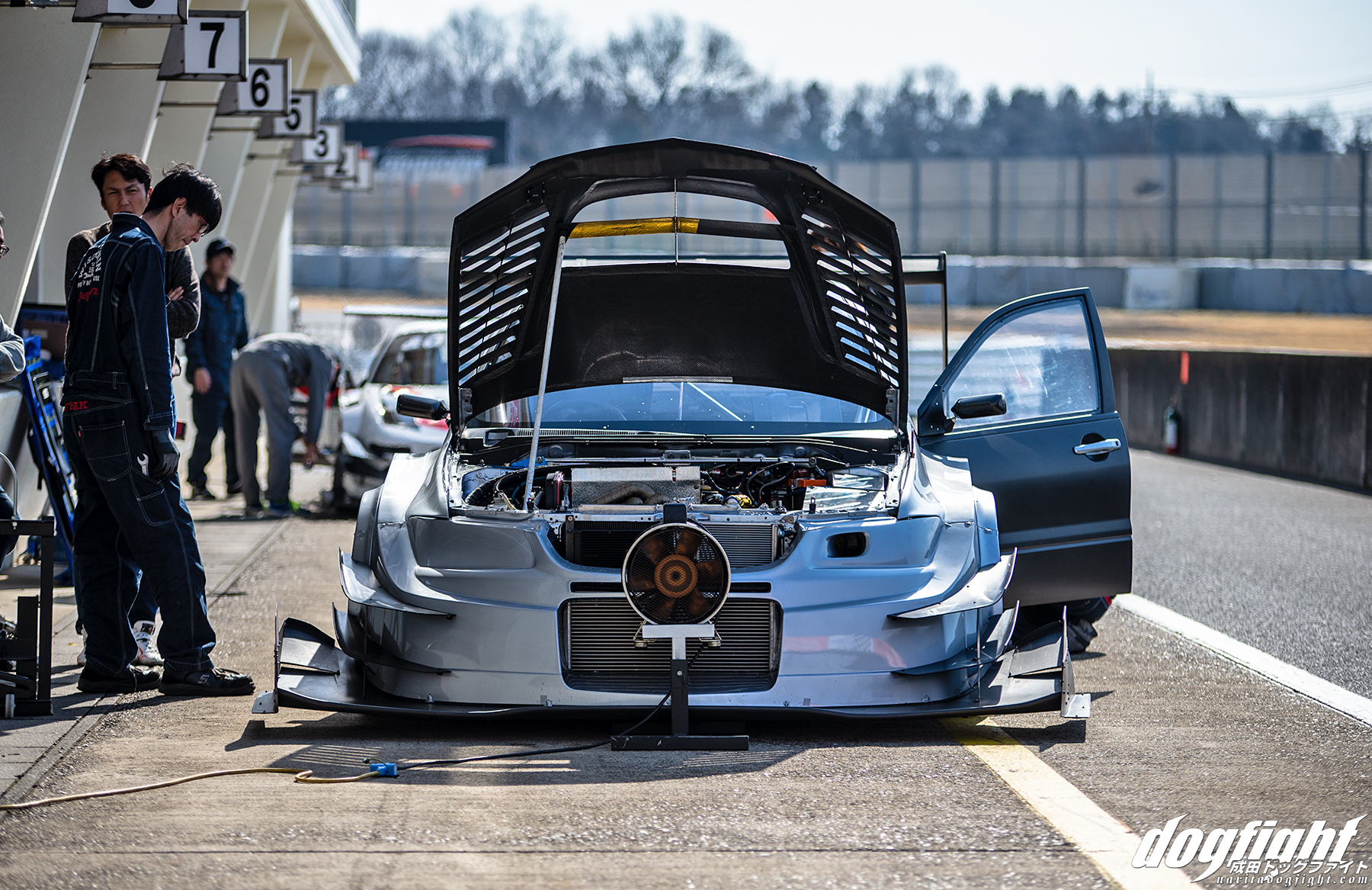 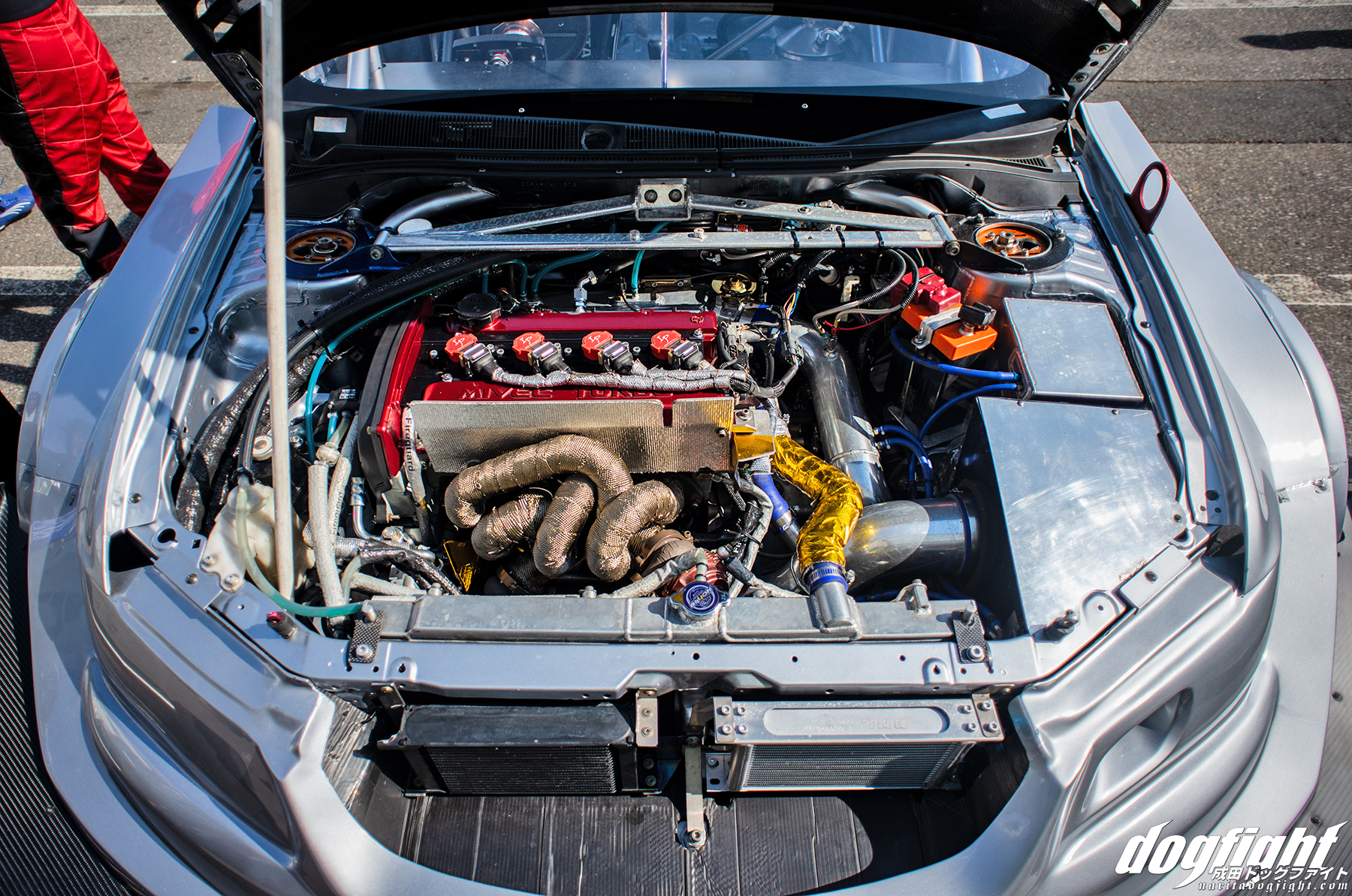 The Tomei stroked, 2.2 liter 4G63 now produces over 800 horsepower thanks in part to the Borg Warner EFR turbo mated to the Full Race manifold.  At 32 psi, the shop is really paying homage to their RH9 membership. 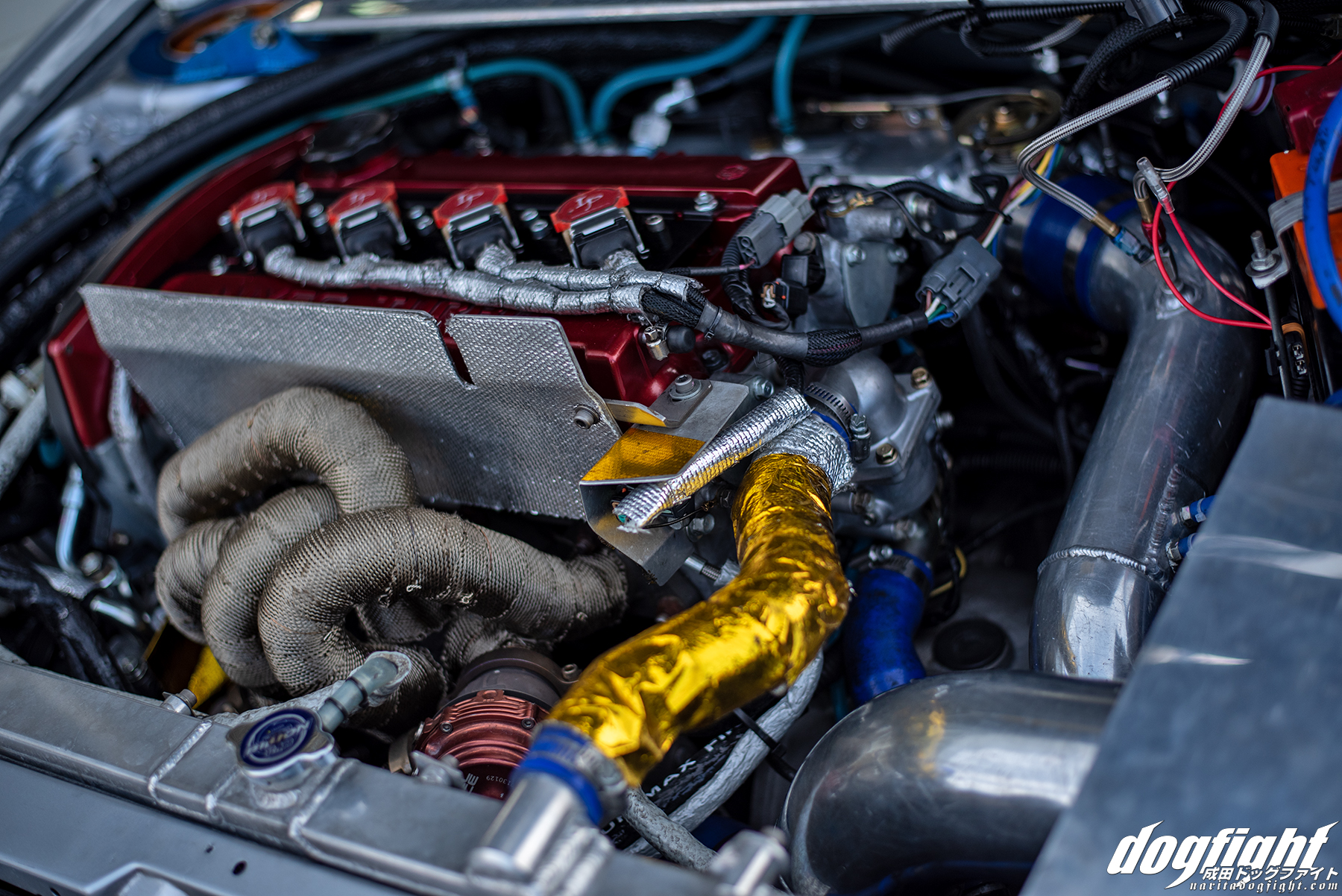 With the car weighing in at just 1,300 kilograms, that’s an impressive ratio. 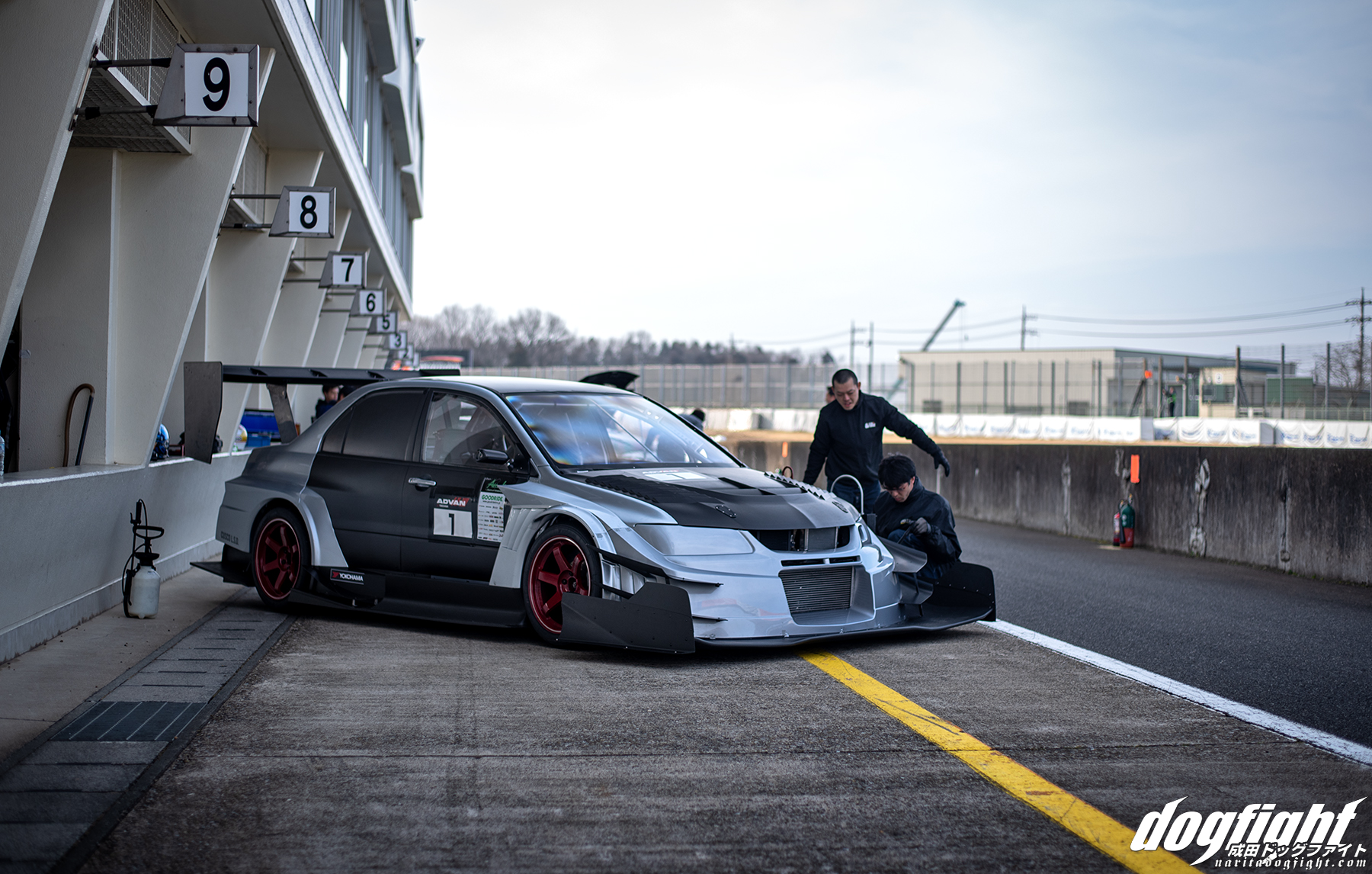 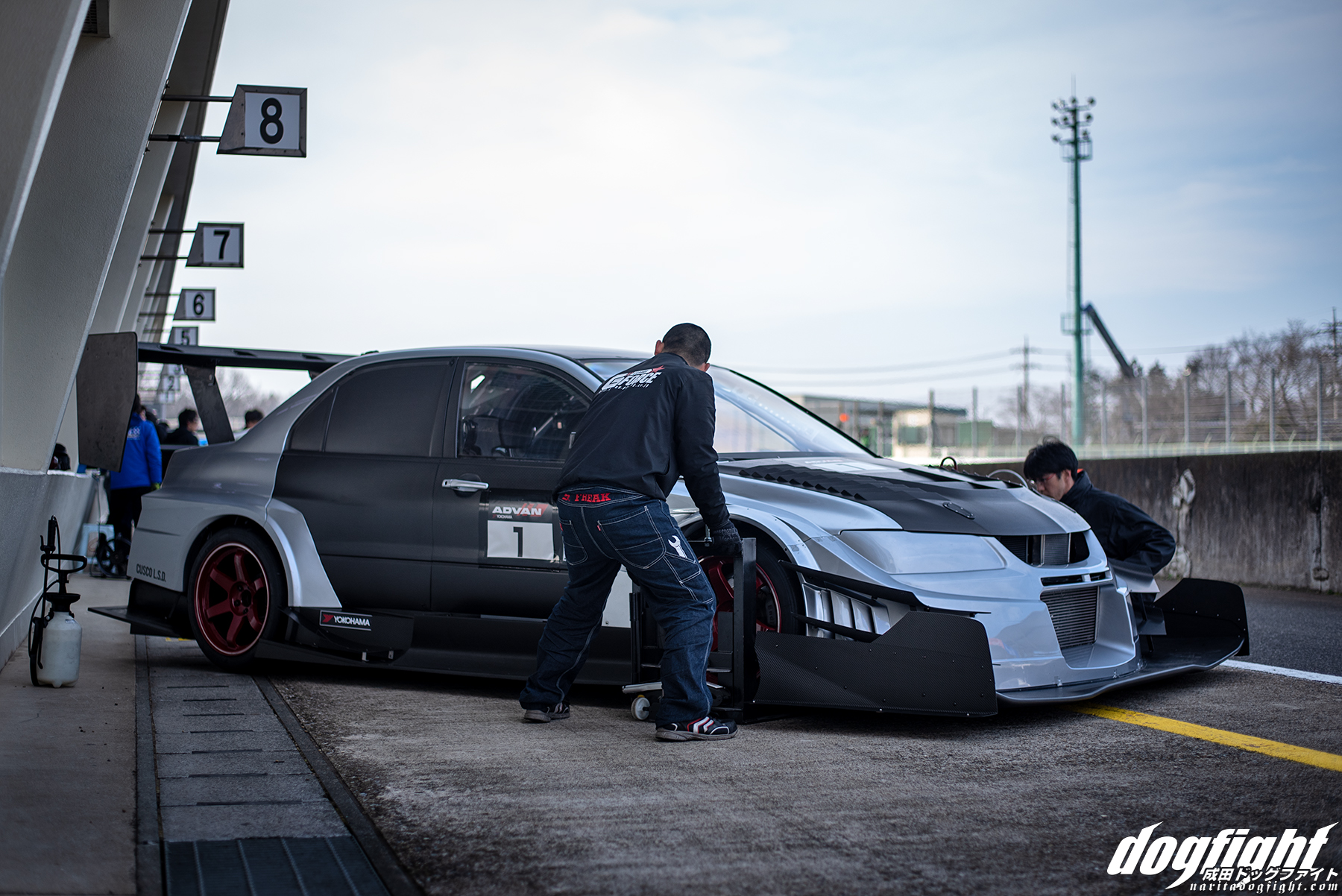 Prepping the car for the first of two open sessions. 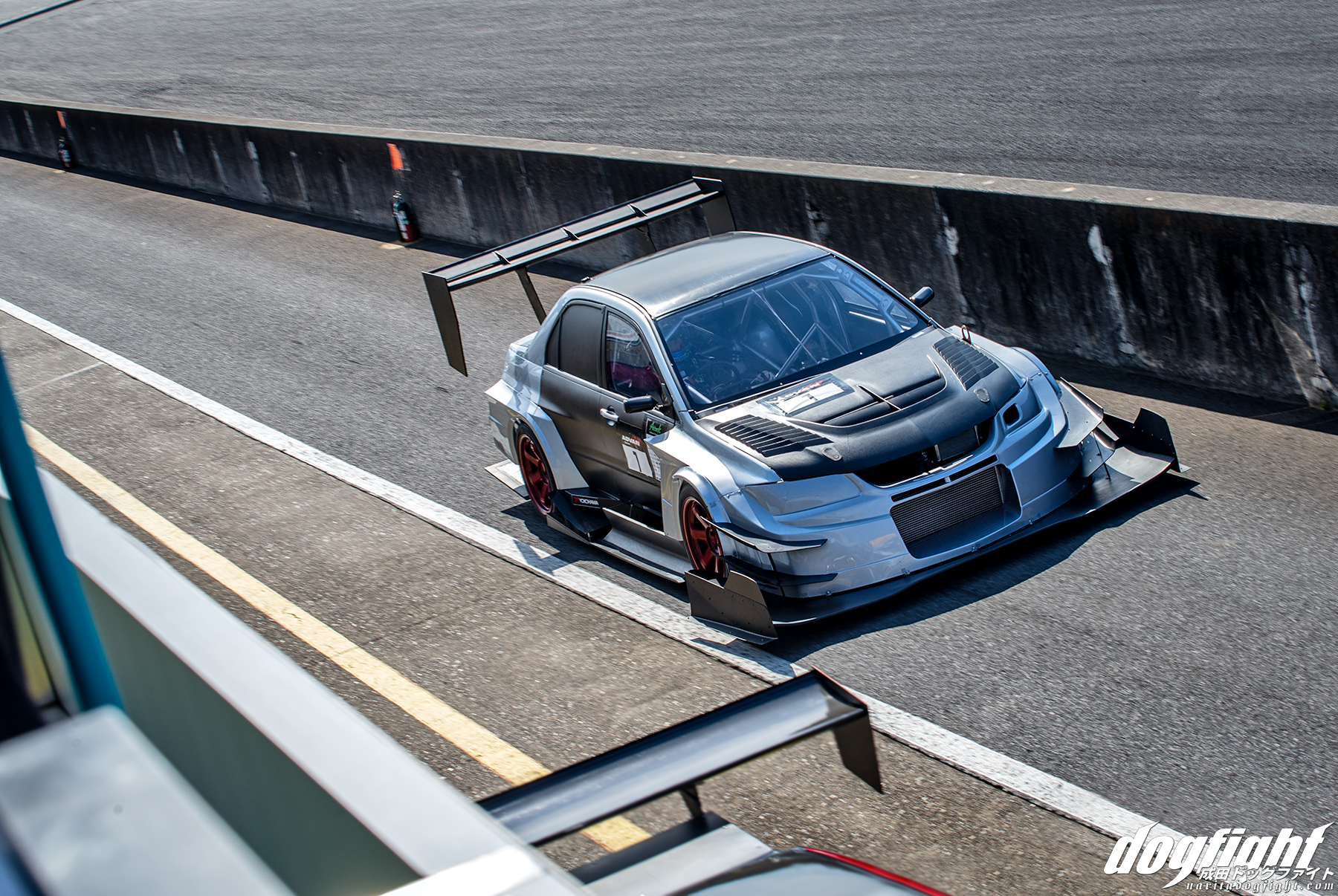 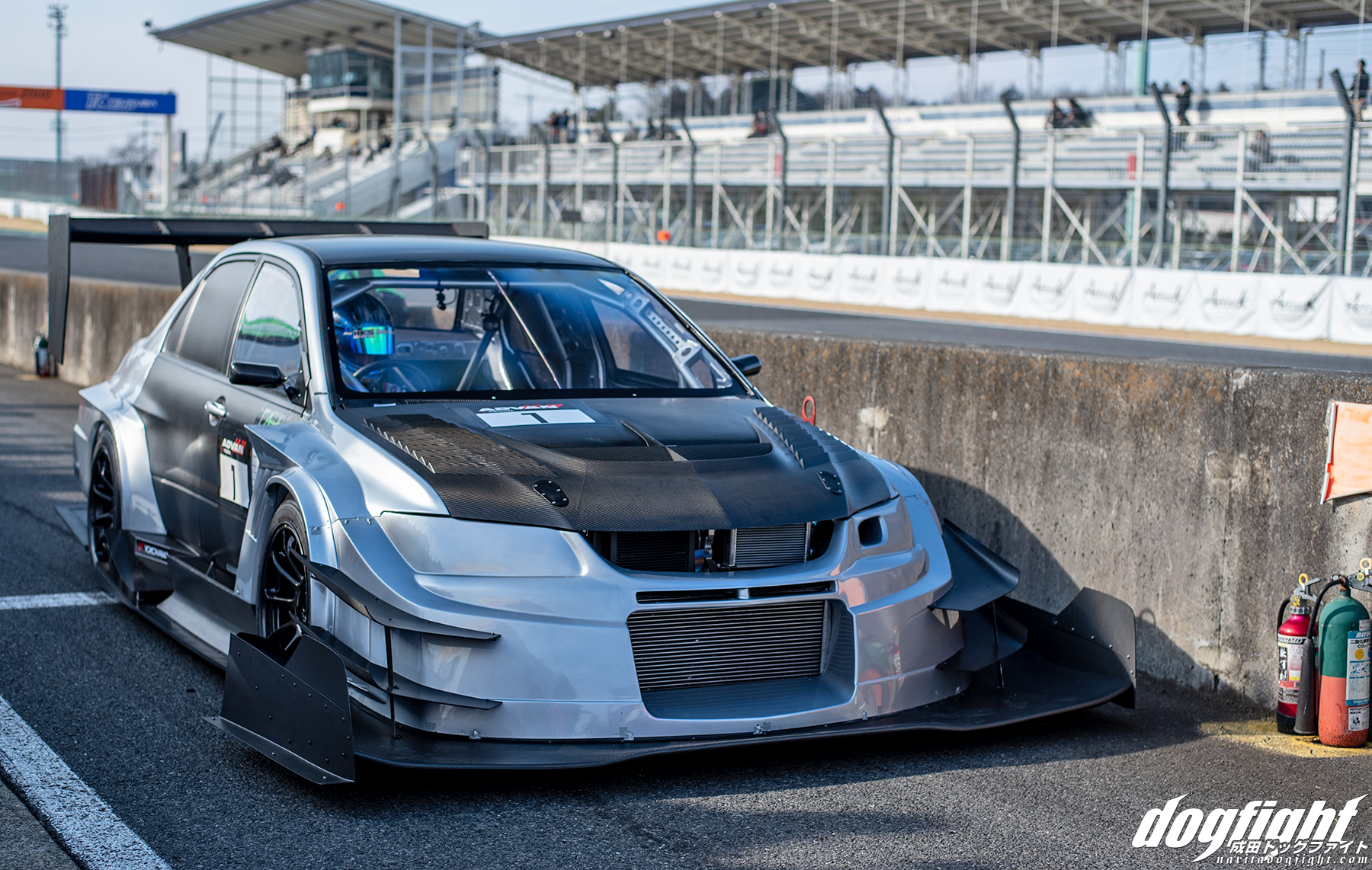 NOB, visor down, ready to drive. 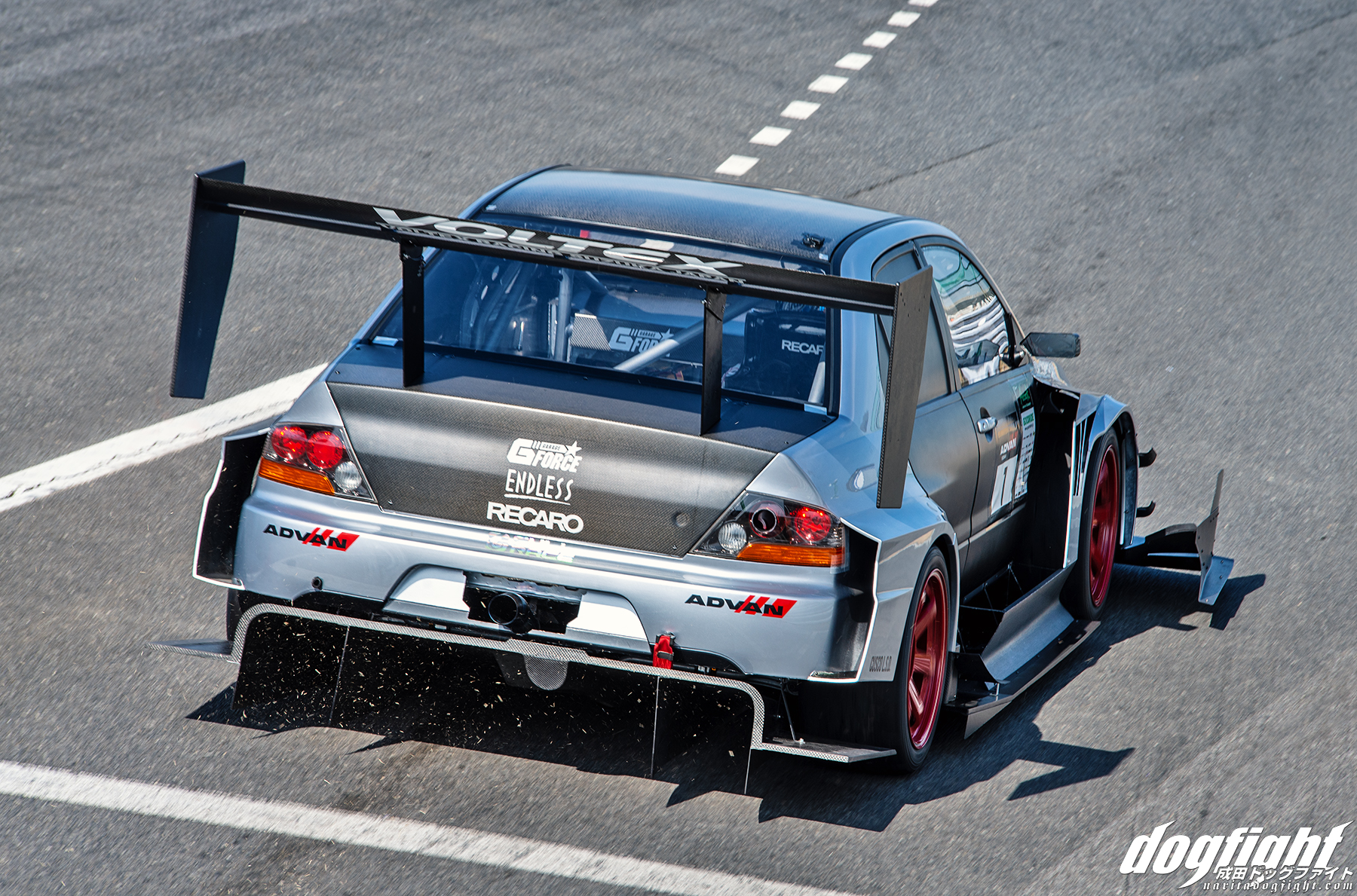 Full throttle out of the pit lane. 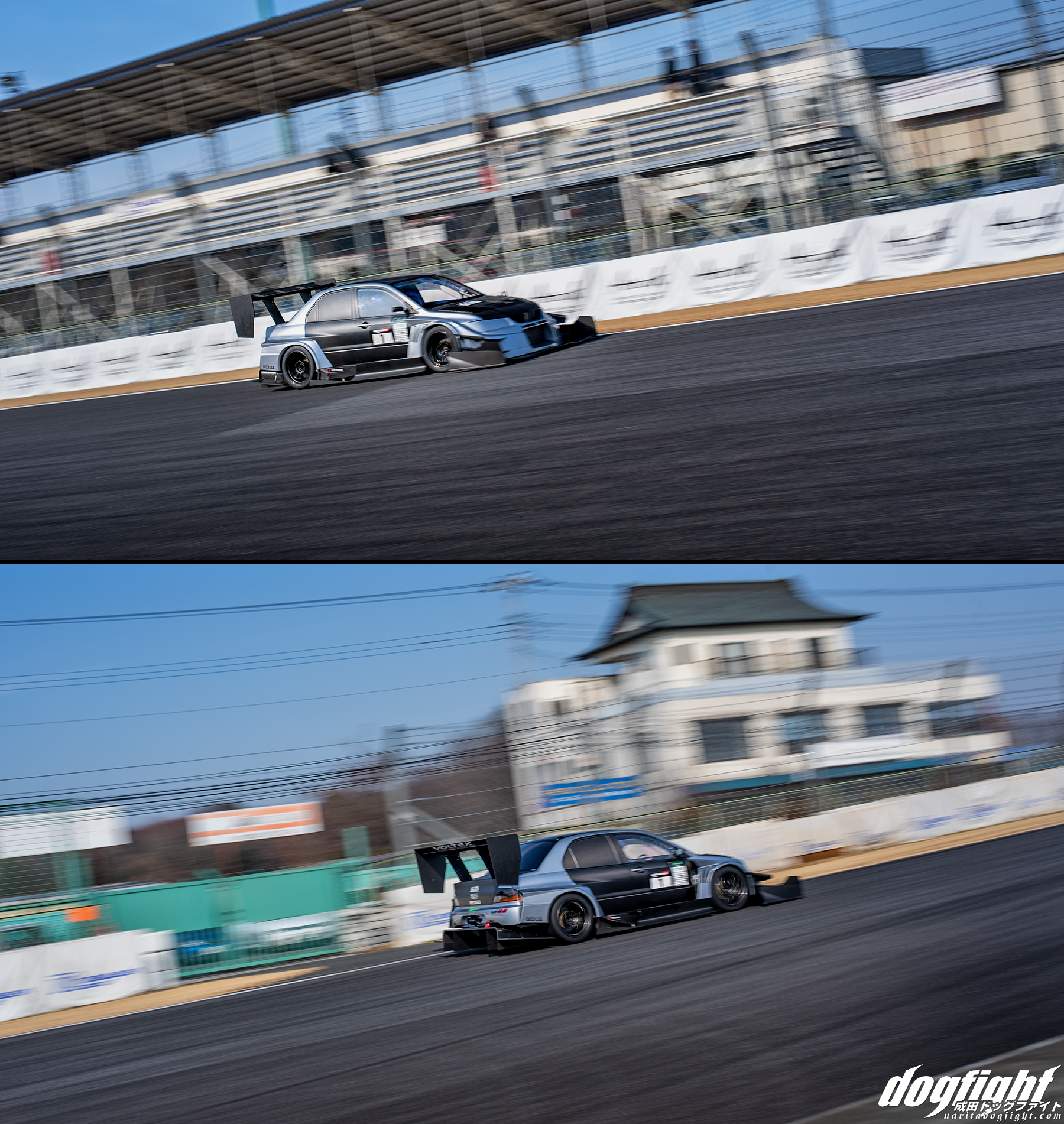 This year they weren’t able to improve on their previous best time.  At this level though, you can’t expect to go faster each time; the conditions have to be ideal. 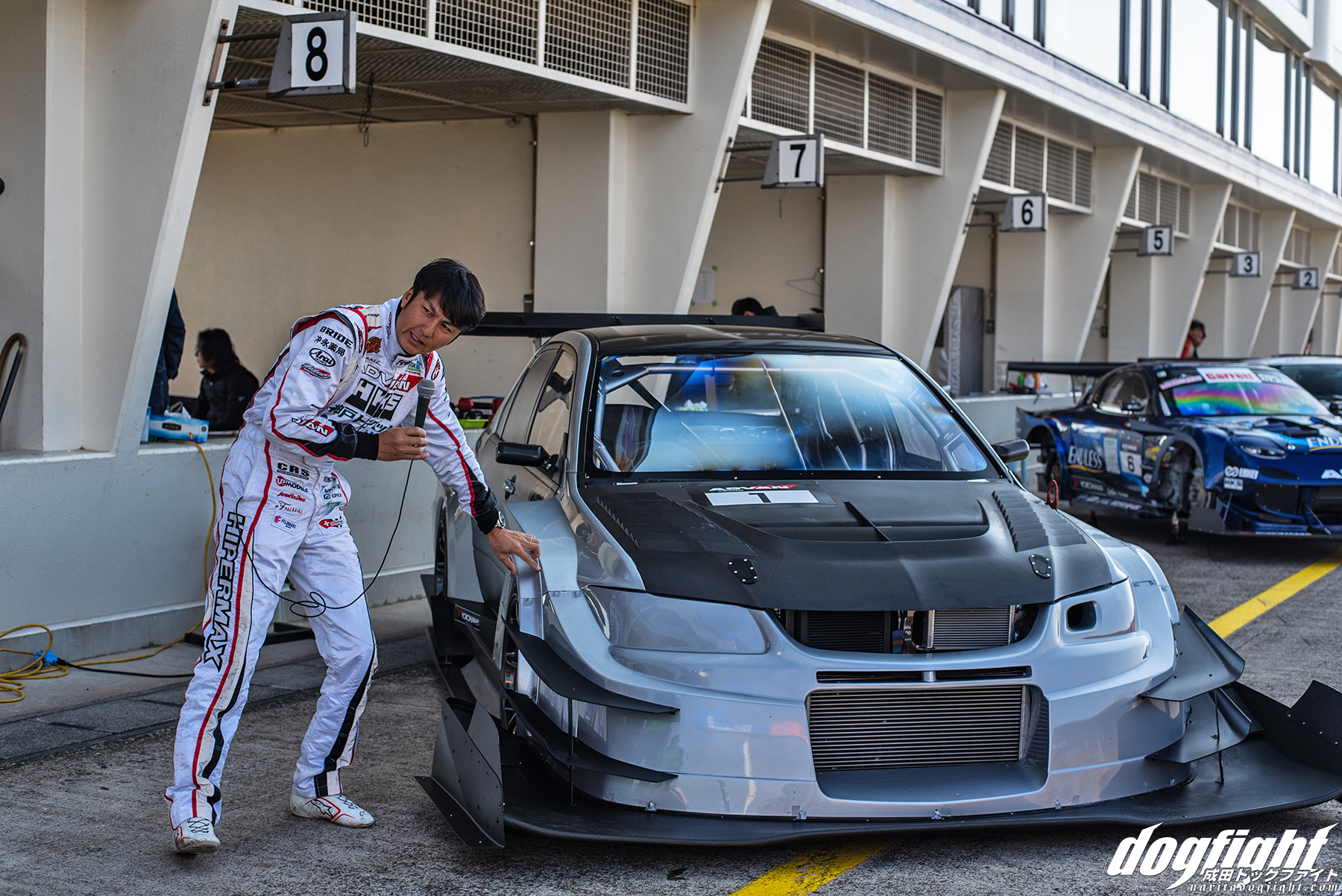 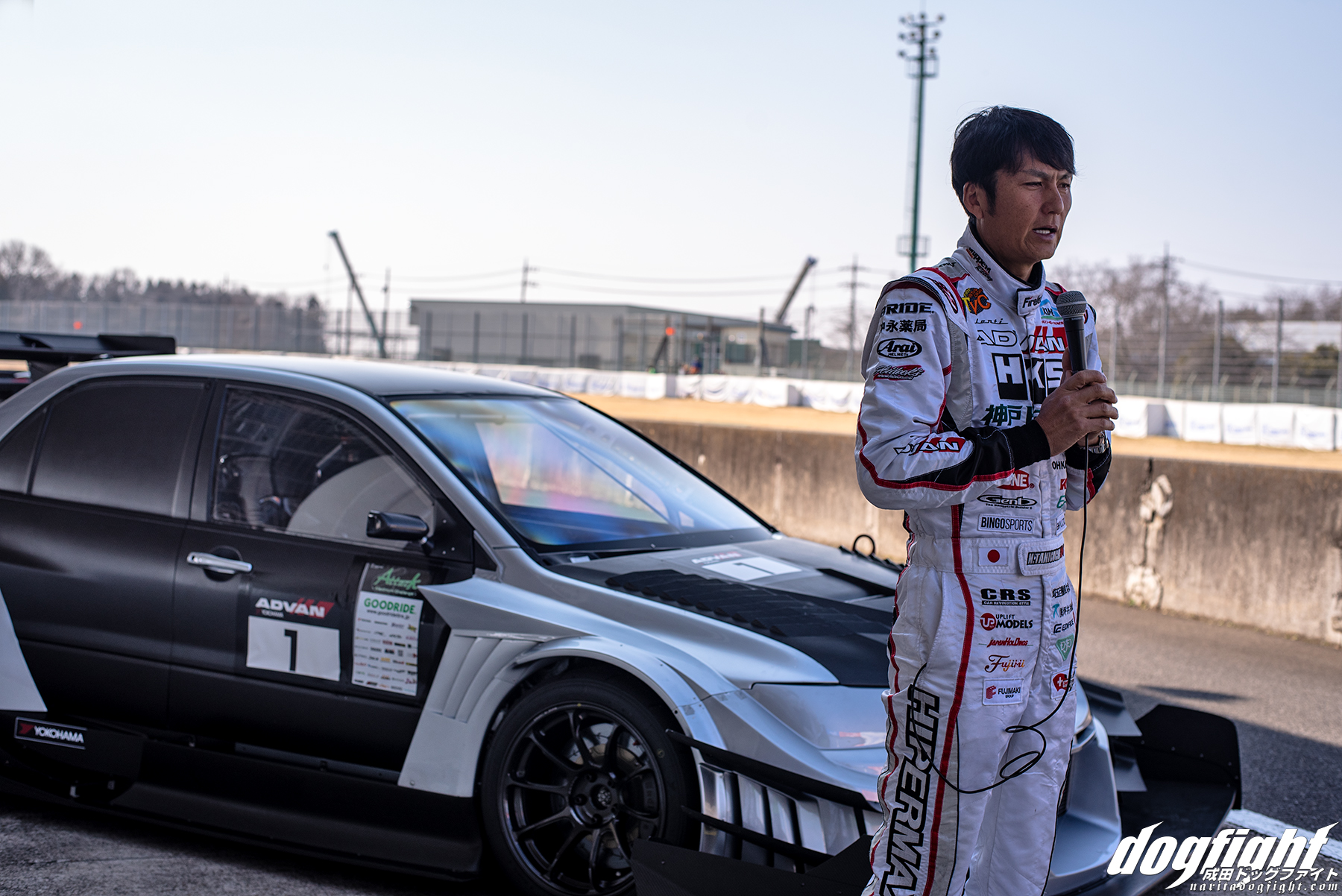 Taniguchi no doubt has the skill to take this car to the 51’s.  Trailing a little over a second behind Ando and the Escort camp, this is turning out to be quite the unspoken rivalry.   Looking forward to see what the end of year testing proves for the team at G-Force.