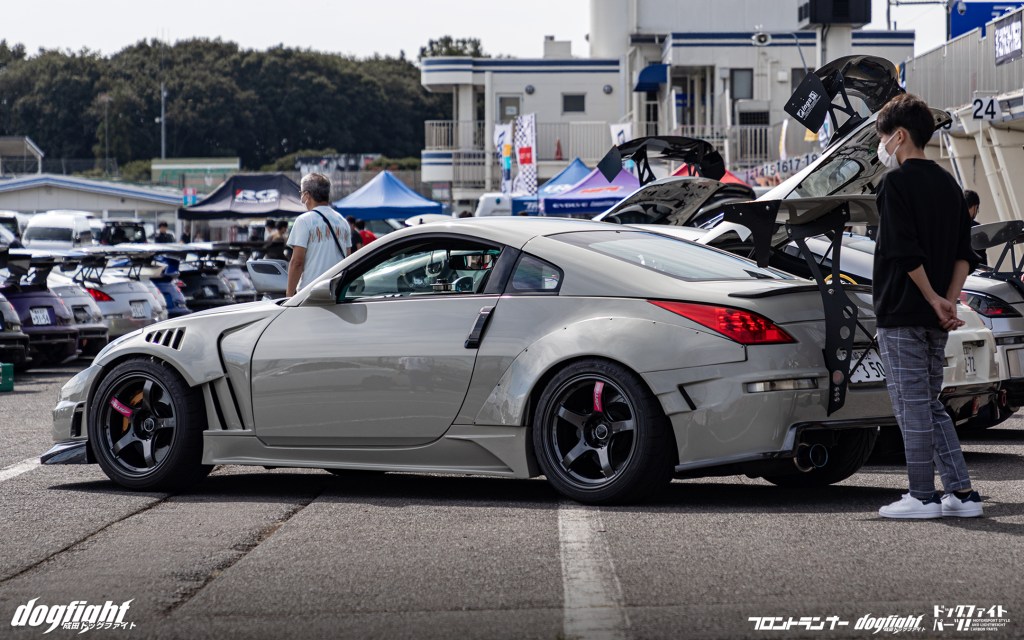 Earlier in the year, Tajima-san and friends acted on their long held idea of organizing their event, FSCM, at Tsukuba Circuit.  The meeting, catered to one of Nissan’s most popular enthusiast chassis’, the Fairlady Z, highlights what they enjoy most about the VQ engine and the potential of the car on track.

Held twice previously at Spa Nishiura Motor Park in Aichi, this would be the first time at TC2000 and once announced on Twitter and social media that they would be taking to the hollowed grounds of Tsukuba, it didn’t take long for the event to garner the attention of Z enthusiasts across the country.  Right away, drivers from over 1,000 kilometers away were expressing interest in attending.  I asked Tajima to explain in his own words, what the event means to the community:

“FairladyZ Skyline Circuit Meeting is a project to enjoy meeting and circuit driving with Z and Skyline riders and circuit enthusiasts. The purpose of this event is not to compete for speed, such as a time attack or a race, but to deepen exchanges with friends who like the same car, and enjoy driving safely on the circuit. In recent years, the number of young users has increased, and for them, the Tsukuba Circuit is familiar with videos, games, and simulators, and many drivers have practiced in advance this time as well. It was also impressive that many people lined up their cars in the paddock and took commemorative photos even after the event was over.”

Needless to say, given the capacity of the paddock, there is certainly a demand for events like this.  I enjoyed Tajima’s description of the community being able to have ‘deep exchanges’ together over their enjoyment of the same chassis.  Not everyone is looking to break records on track, but the vast majority of drivers still want to experience what it’s like to try their hand at circuit driving.  Events like this allow the general populace to dip their toes into the world of motor sports. 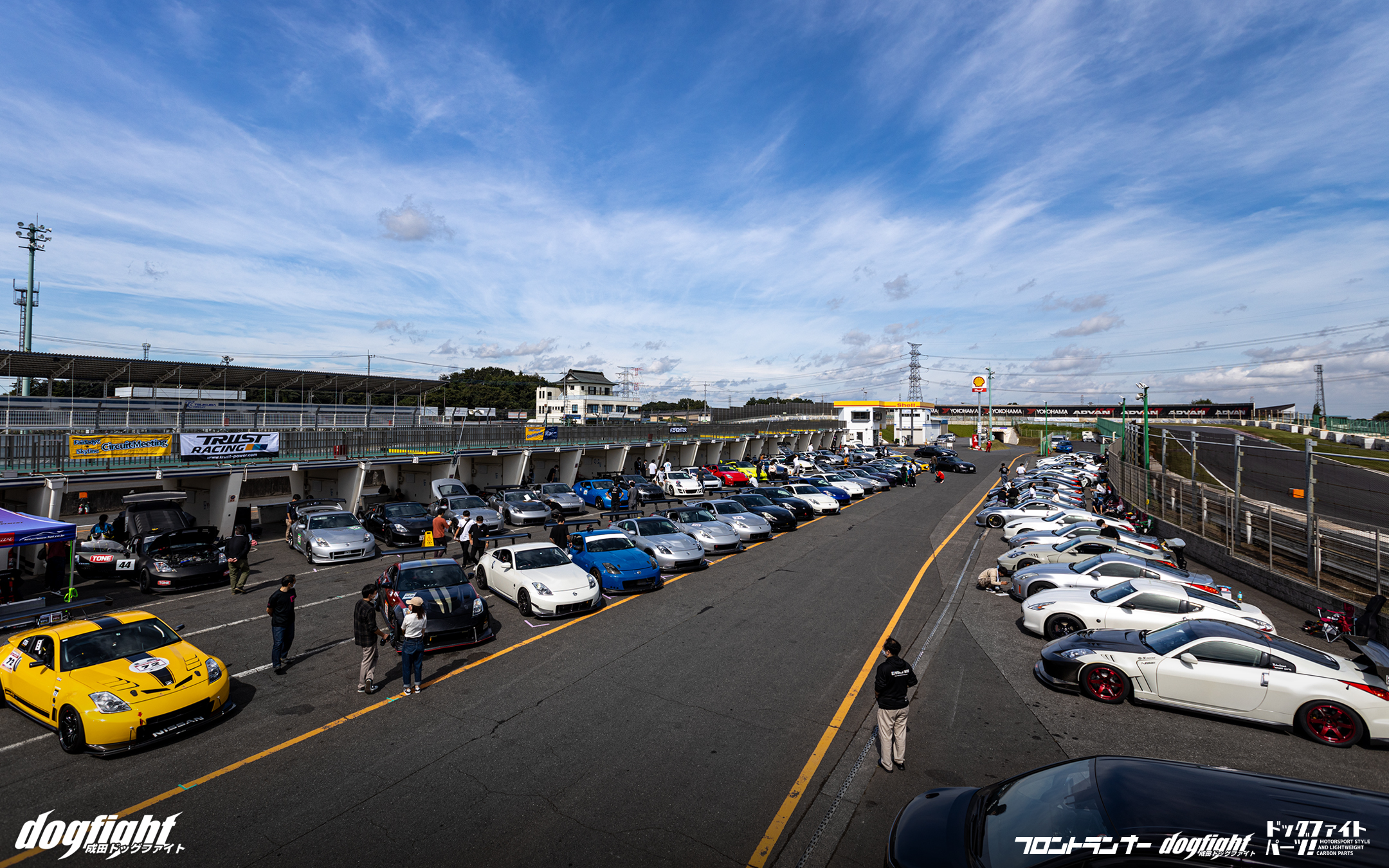 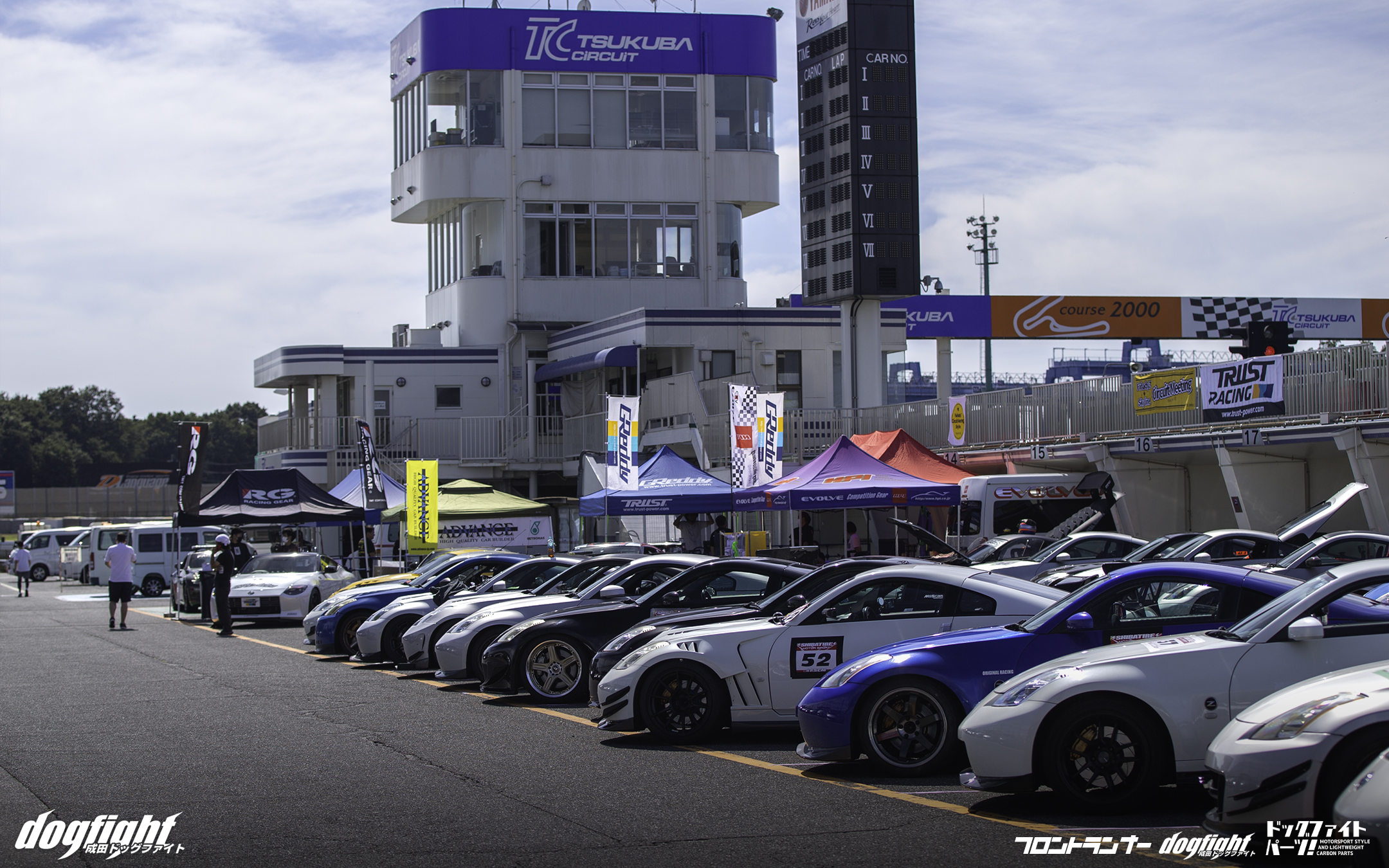 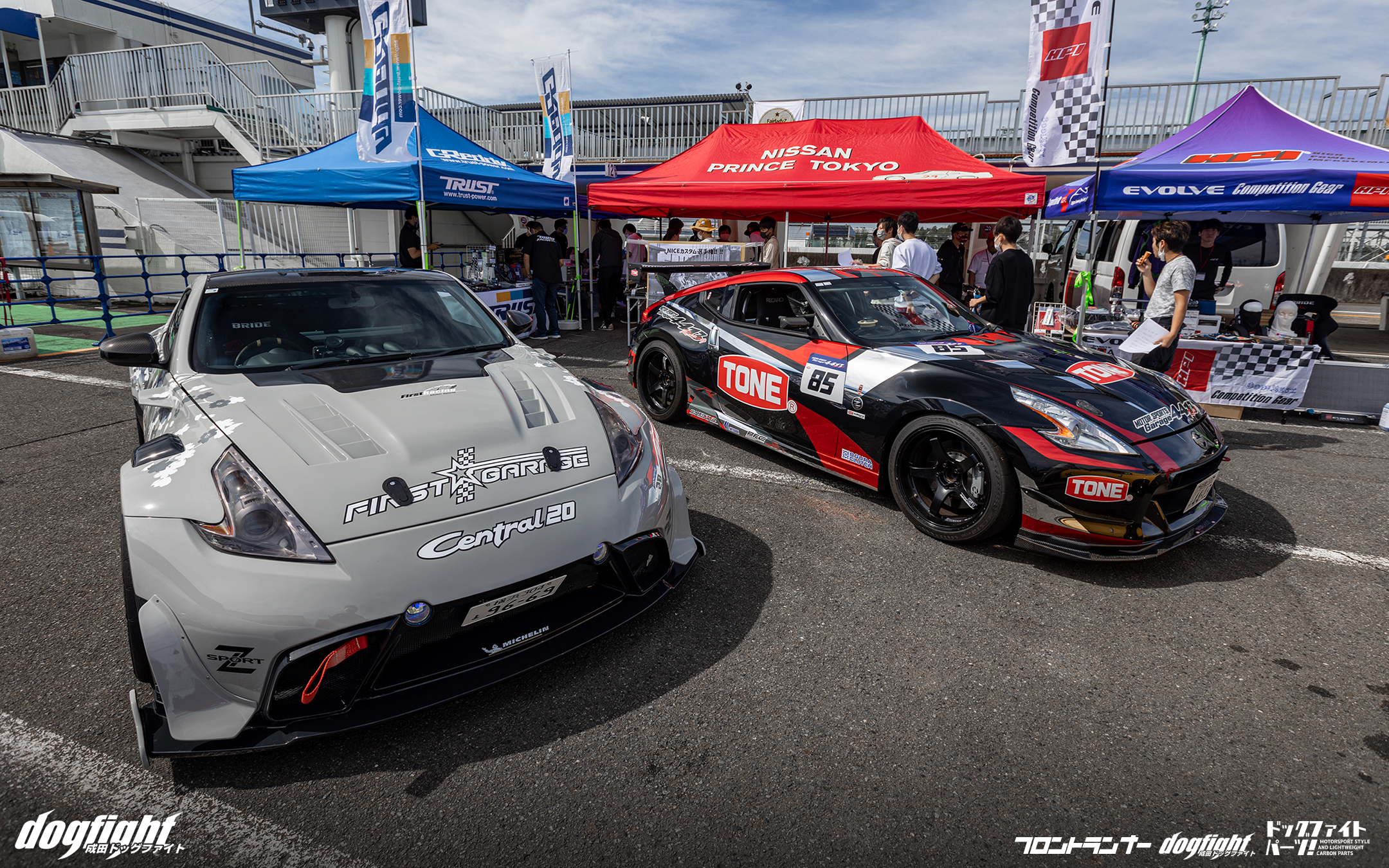 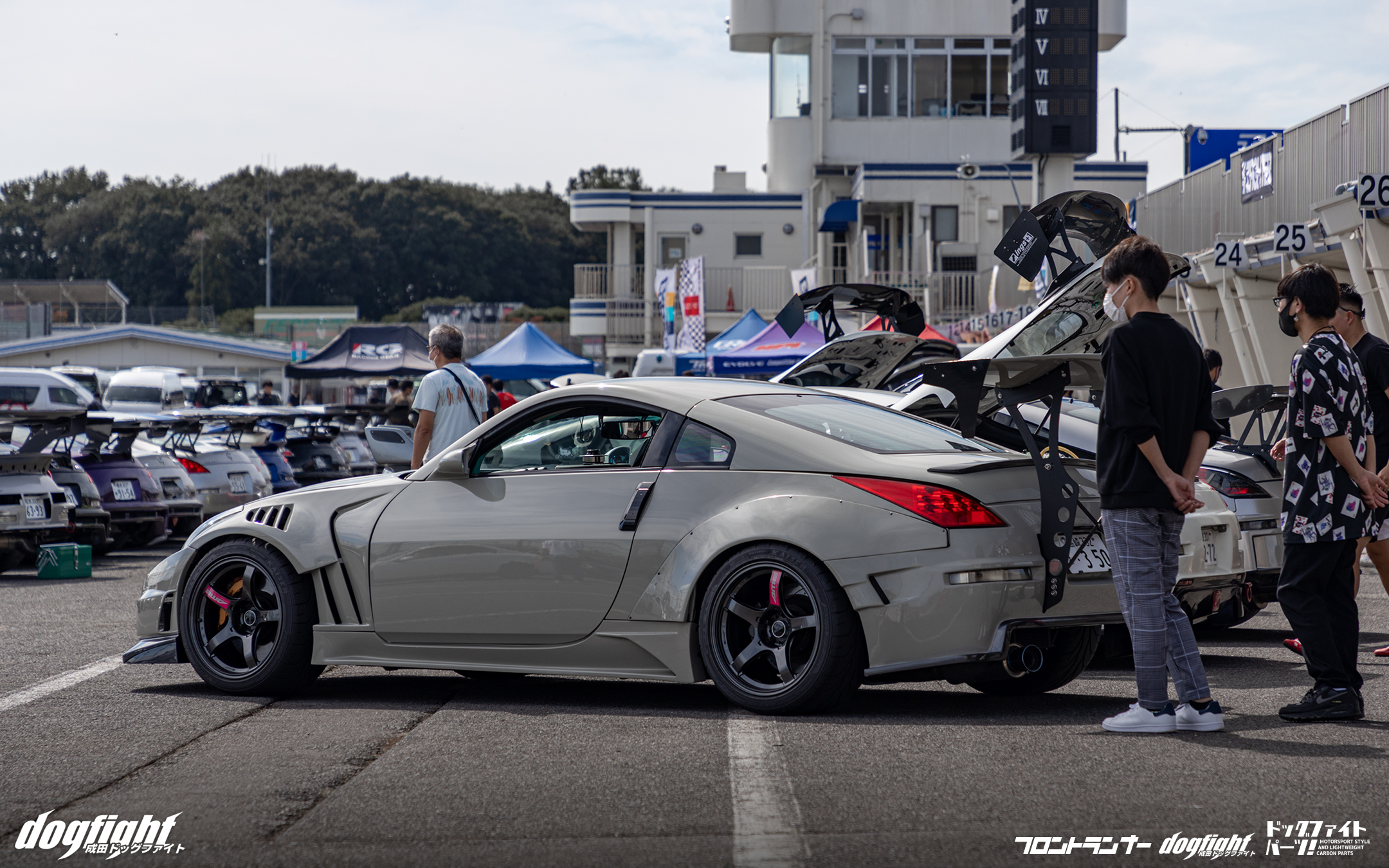 This grey Z33 looked great with the combination of a Voltex front bumper, and what appears to be either custom N-One Sundome or Amuse fenders.  The bold spokes of the AME Tracers matches the body lines well. 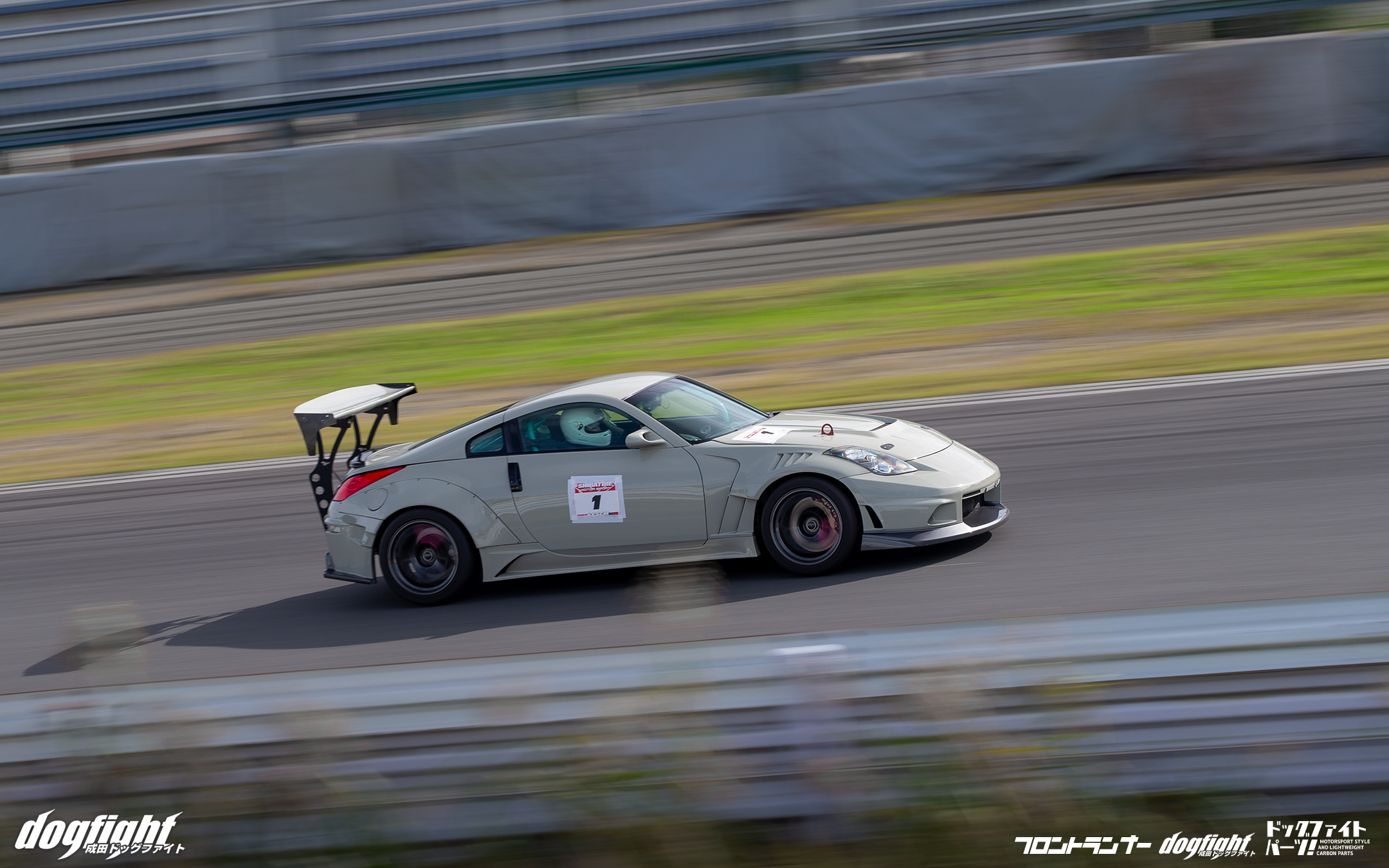 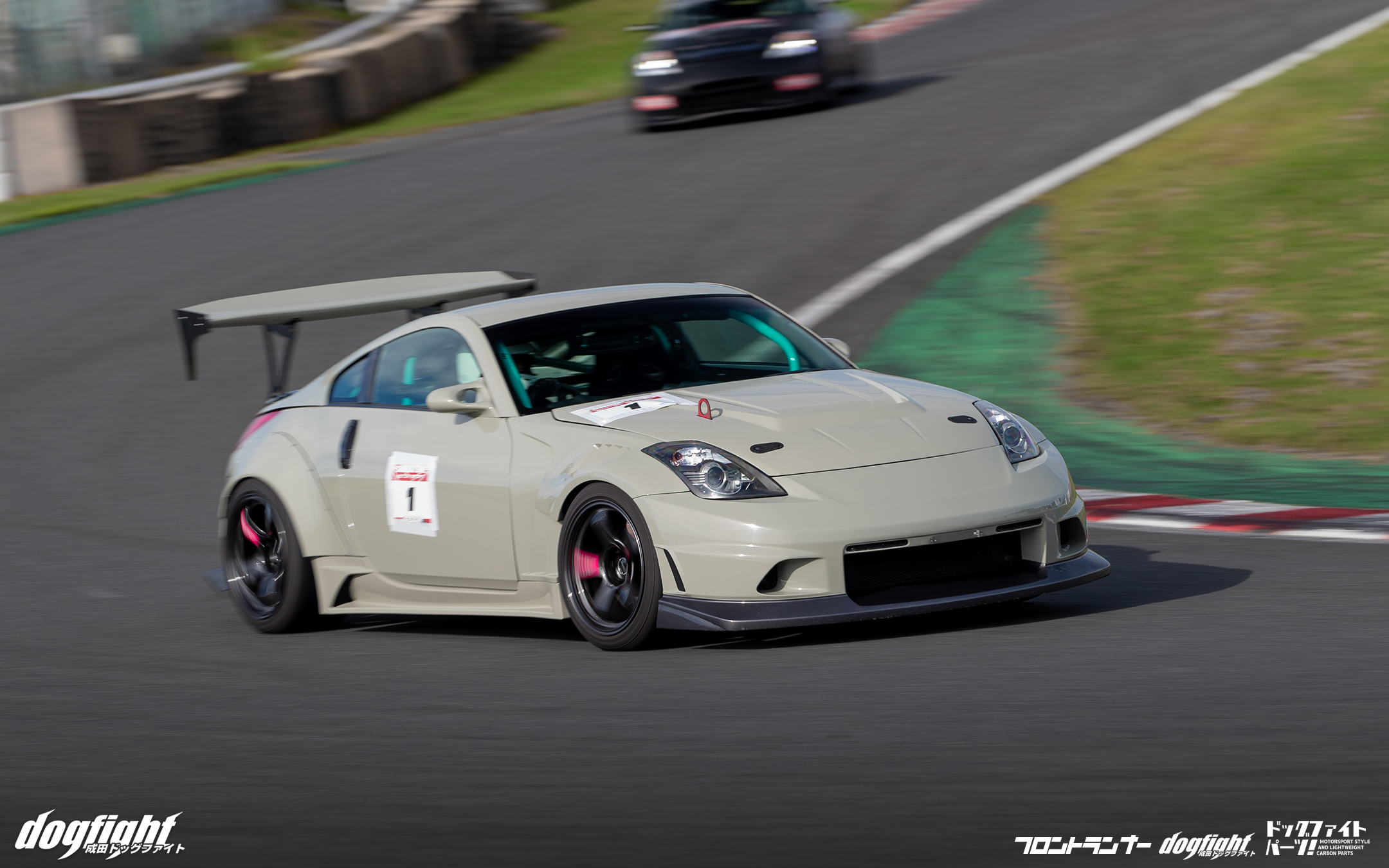 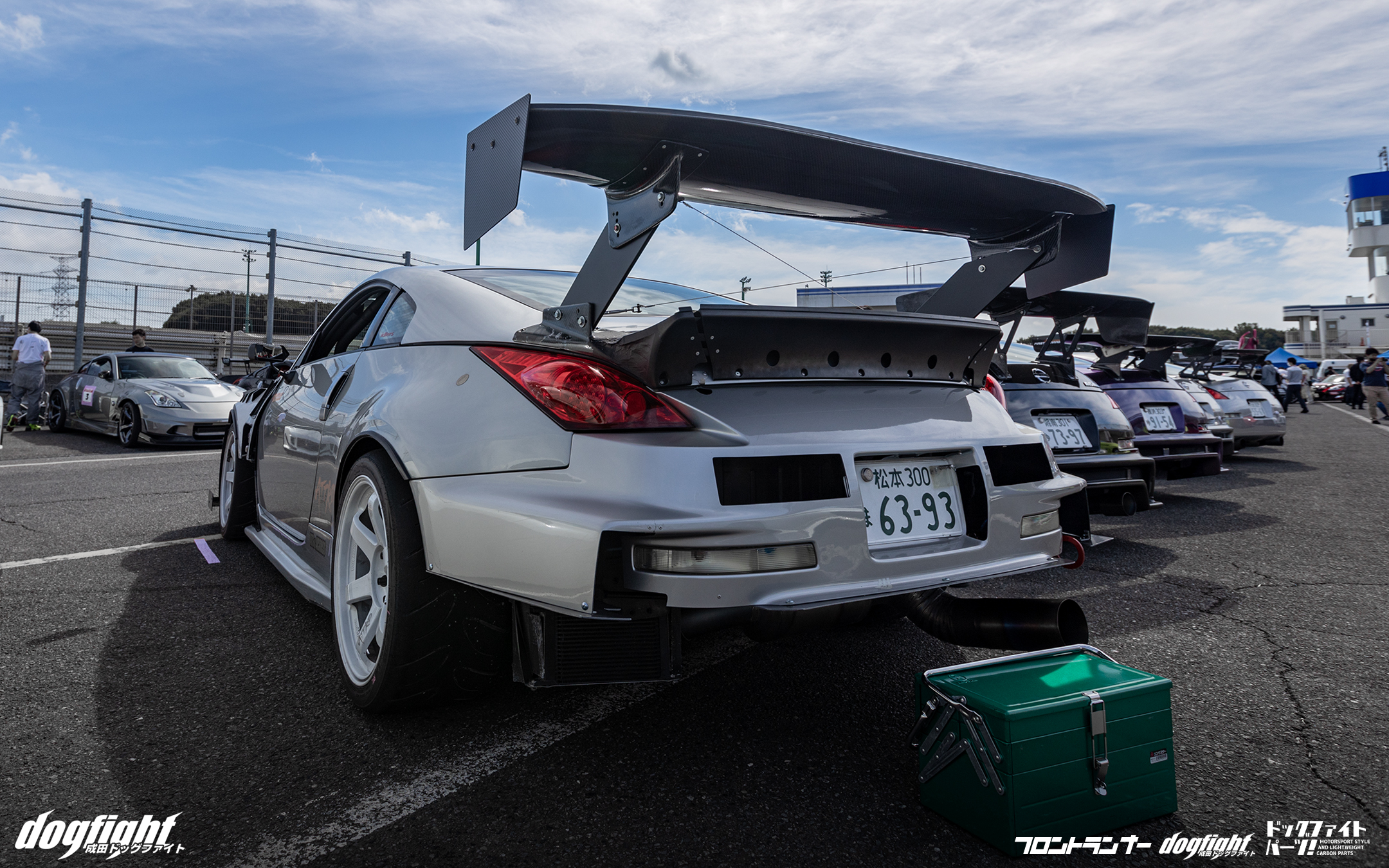 Yasushi’s Z33 was among the more highly tuned Z33’s at the event.  Having support from the famous shop ATTKD, it sees circuits like Honjo quite often. 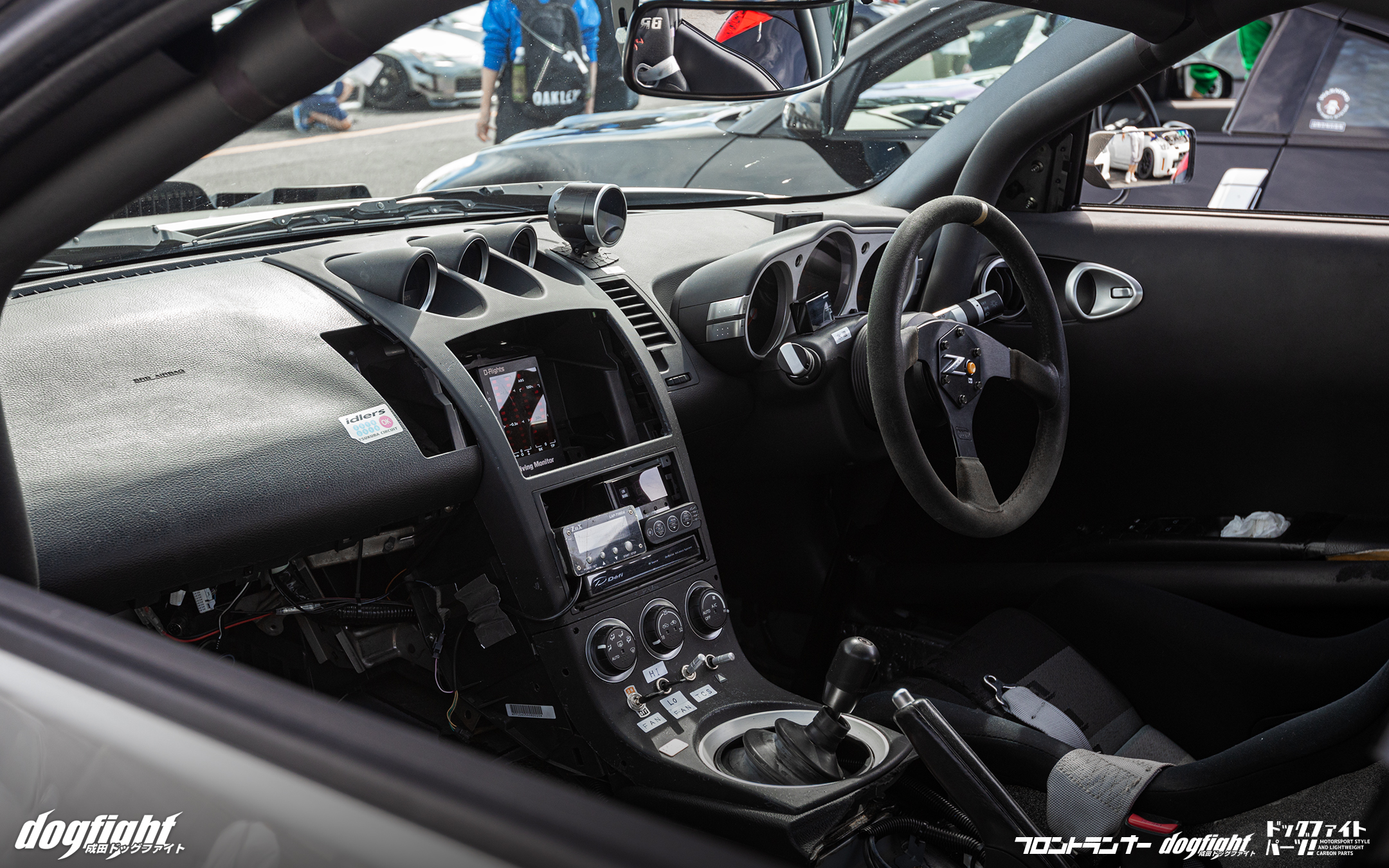 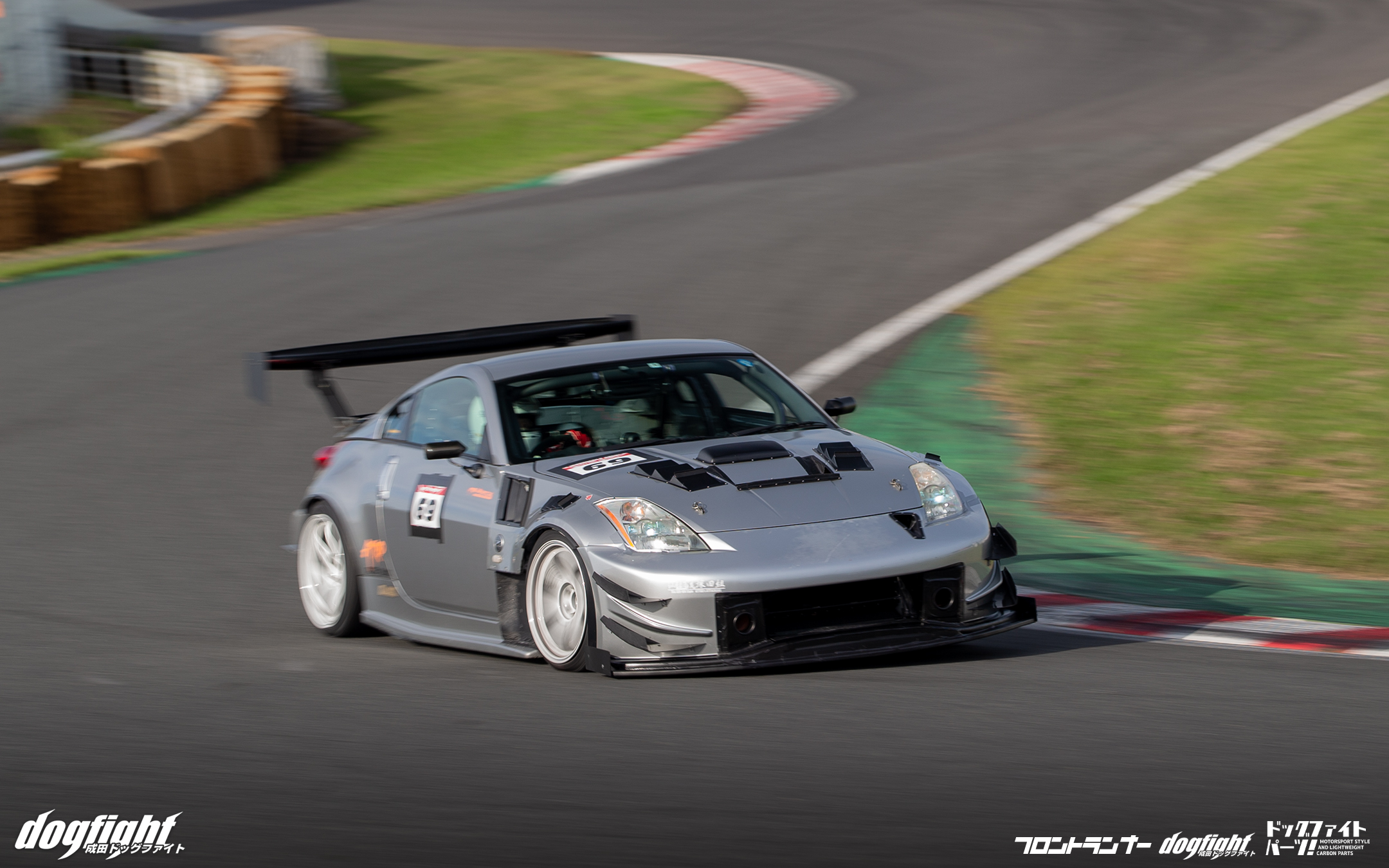 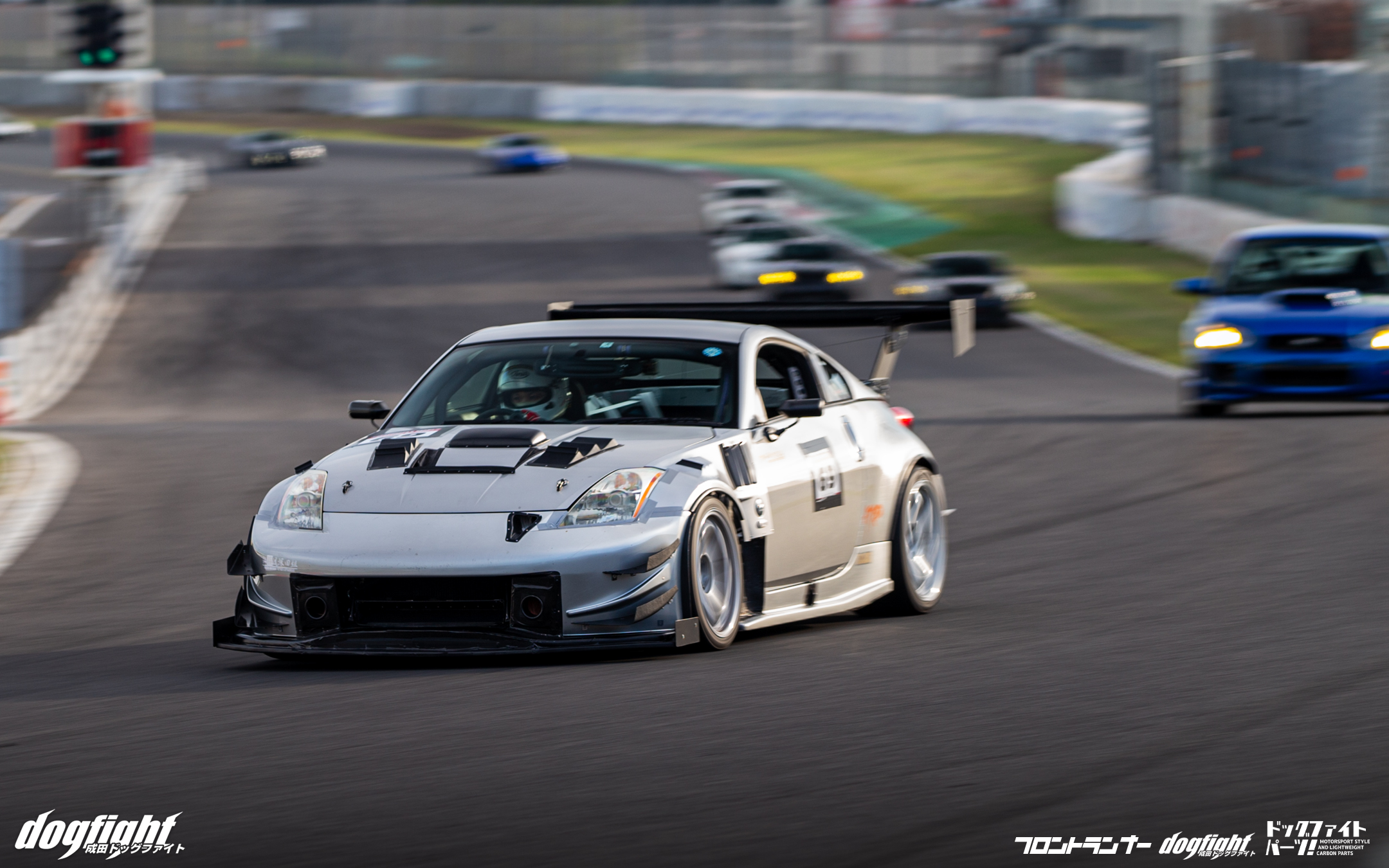 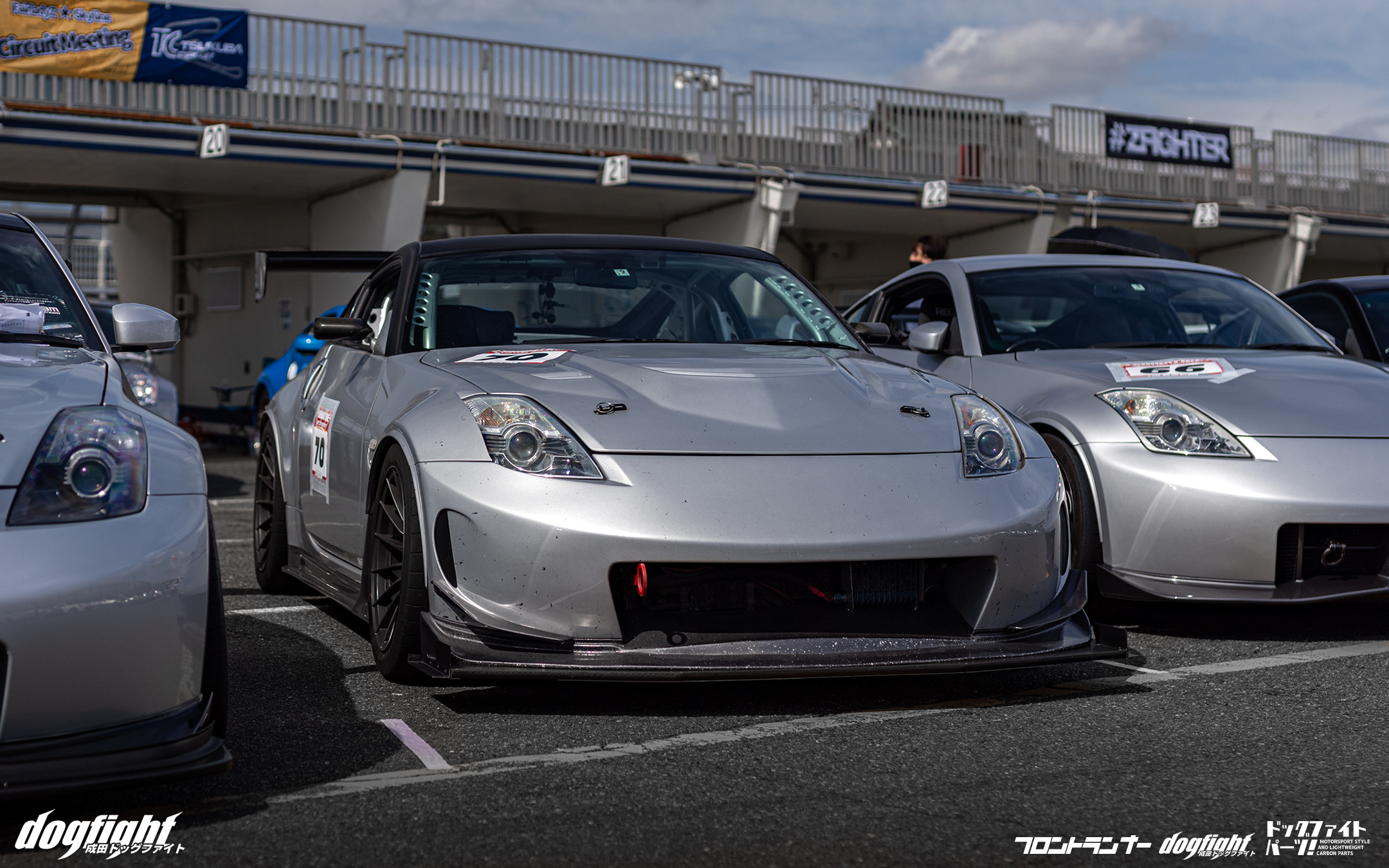 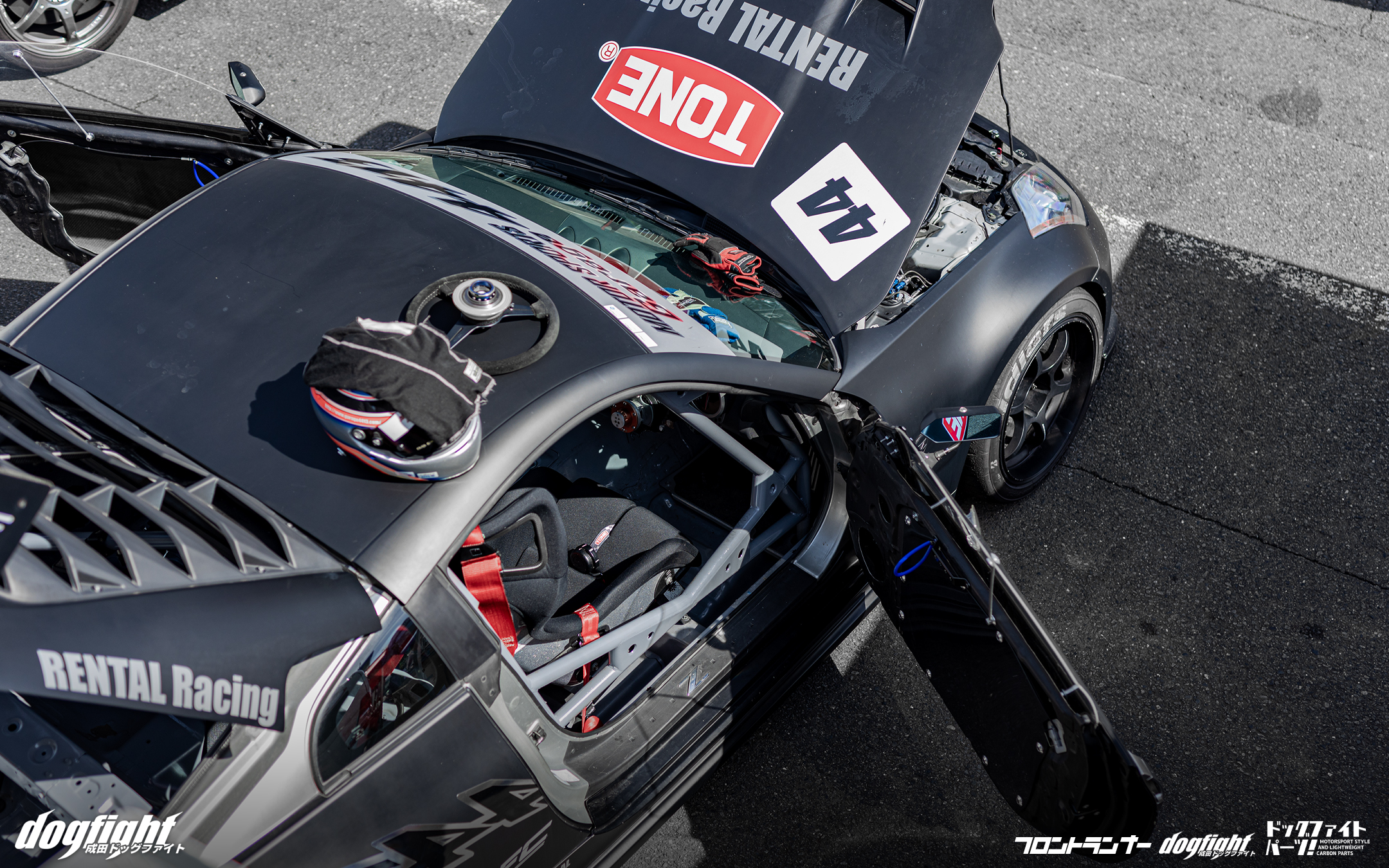 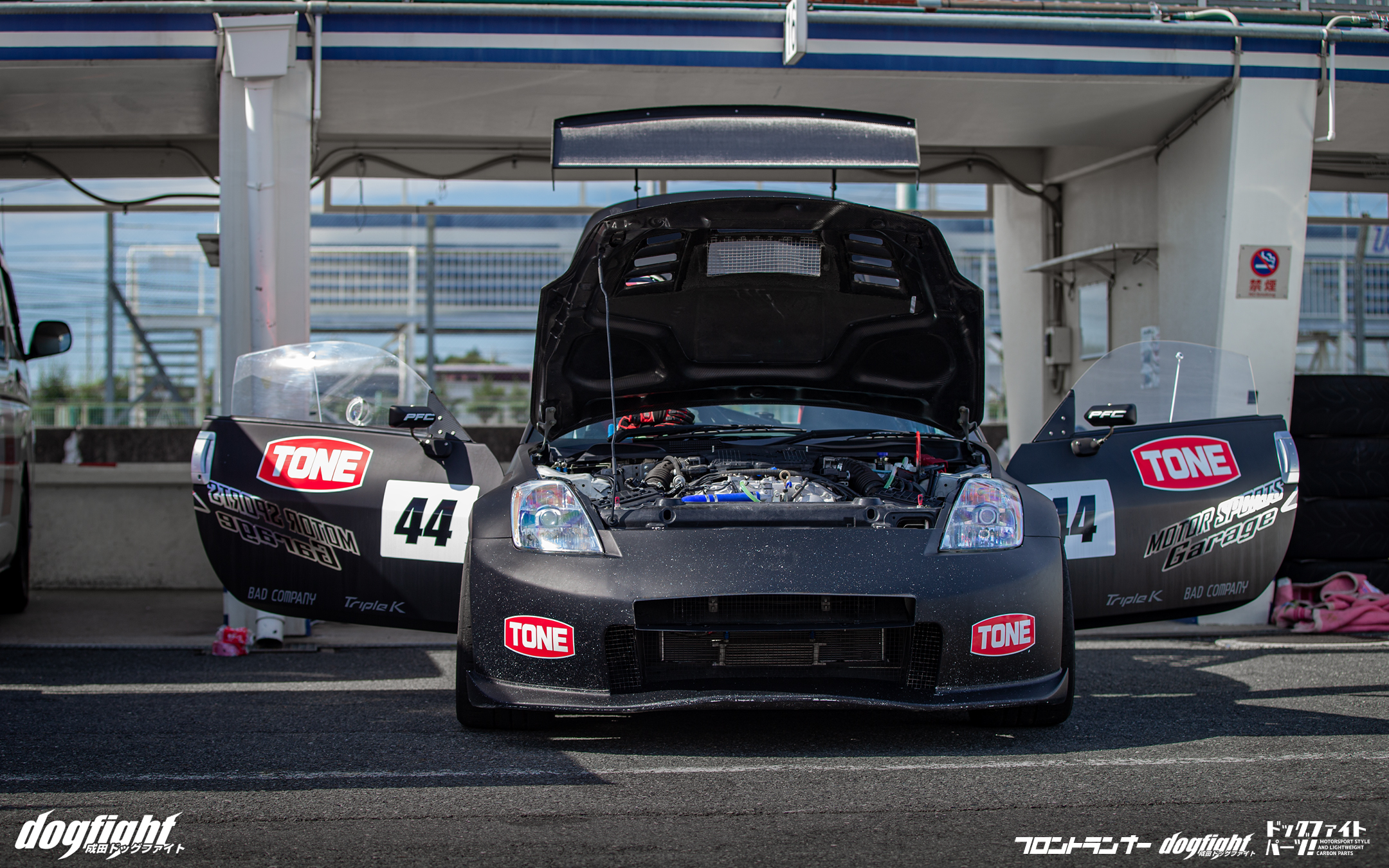 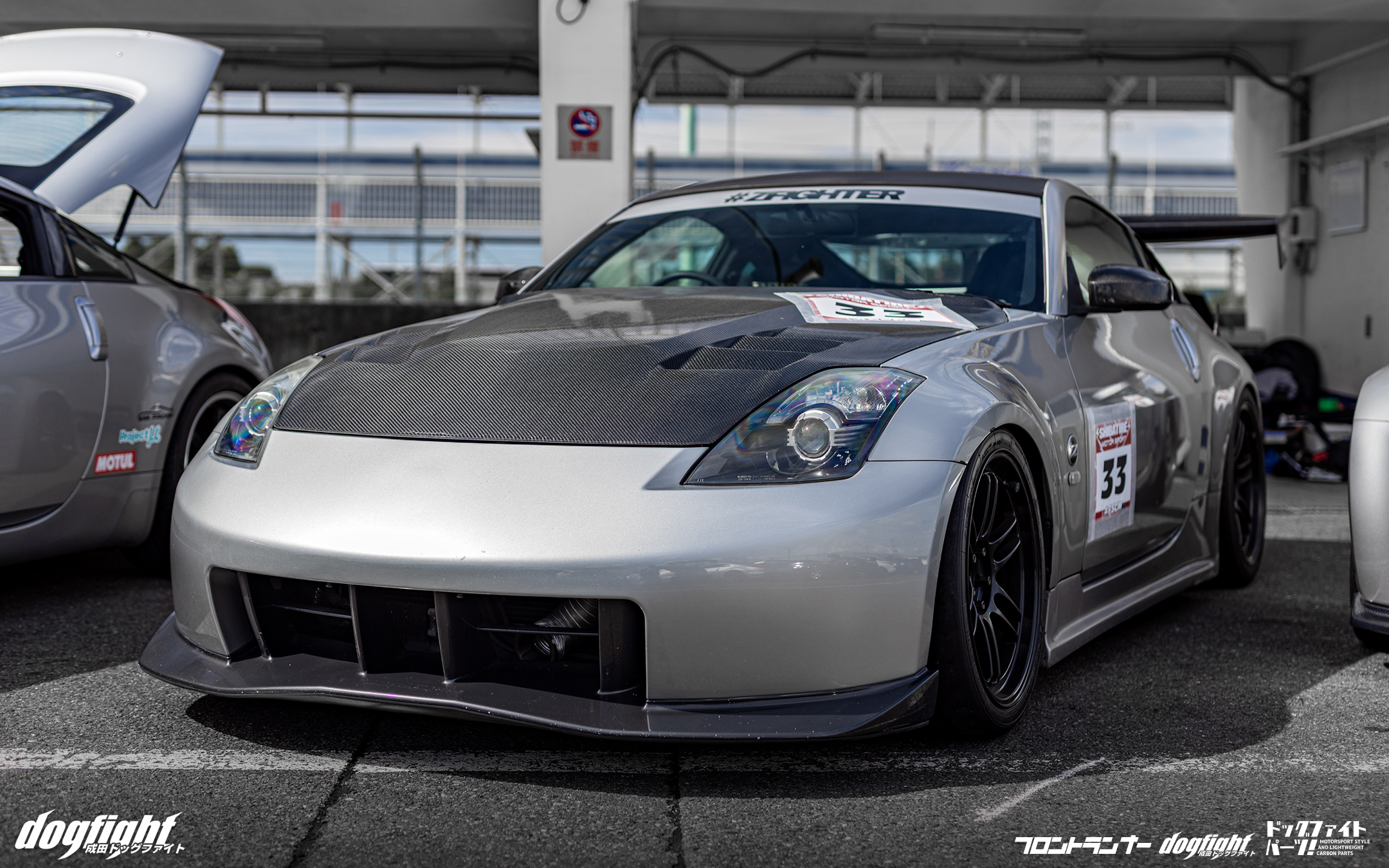 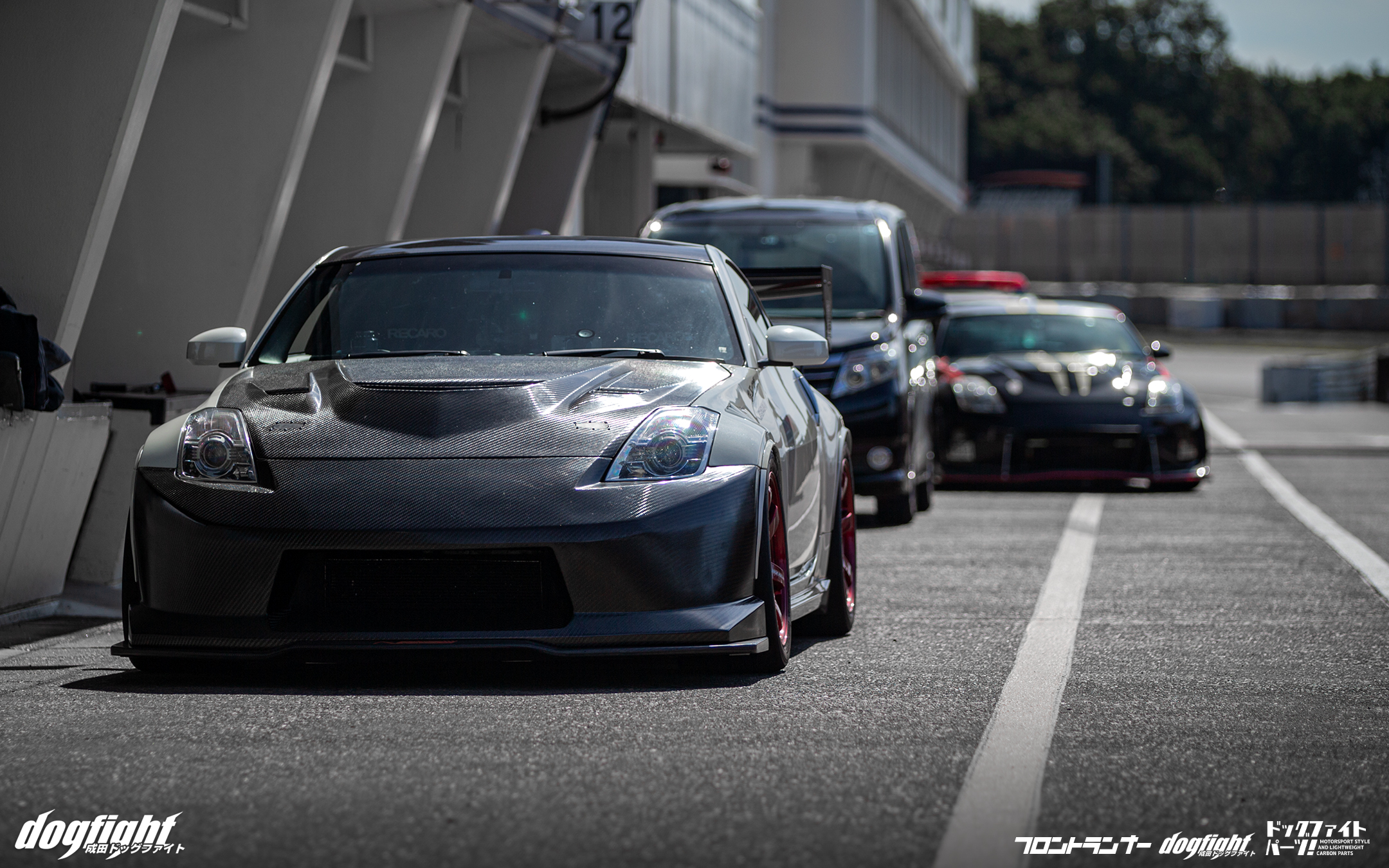 Tajima’s 380RS was among the cleanest at the event – as usual.  During the off season he was hinting at the idea of paint matching the carbon hood and front bumper.  Looks like he held off as the bold carbon weave is still visible under the bright Tsukuba sun. 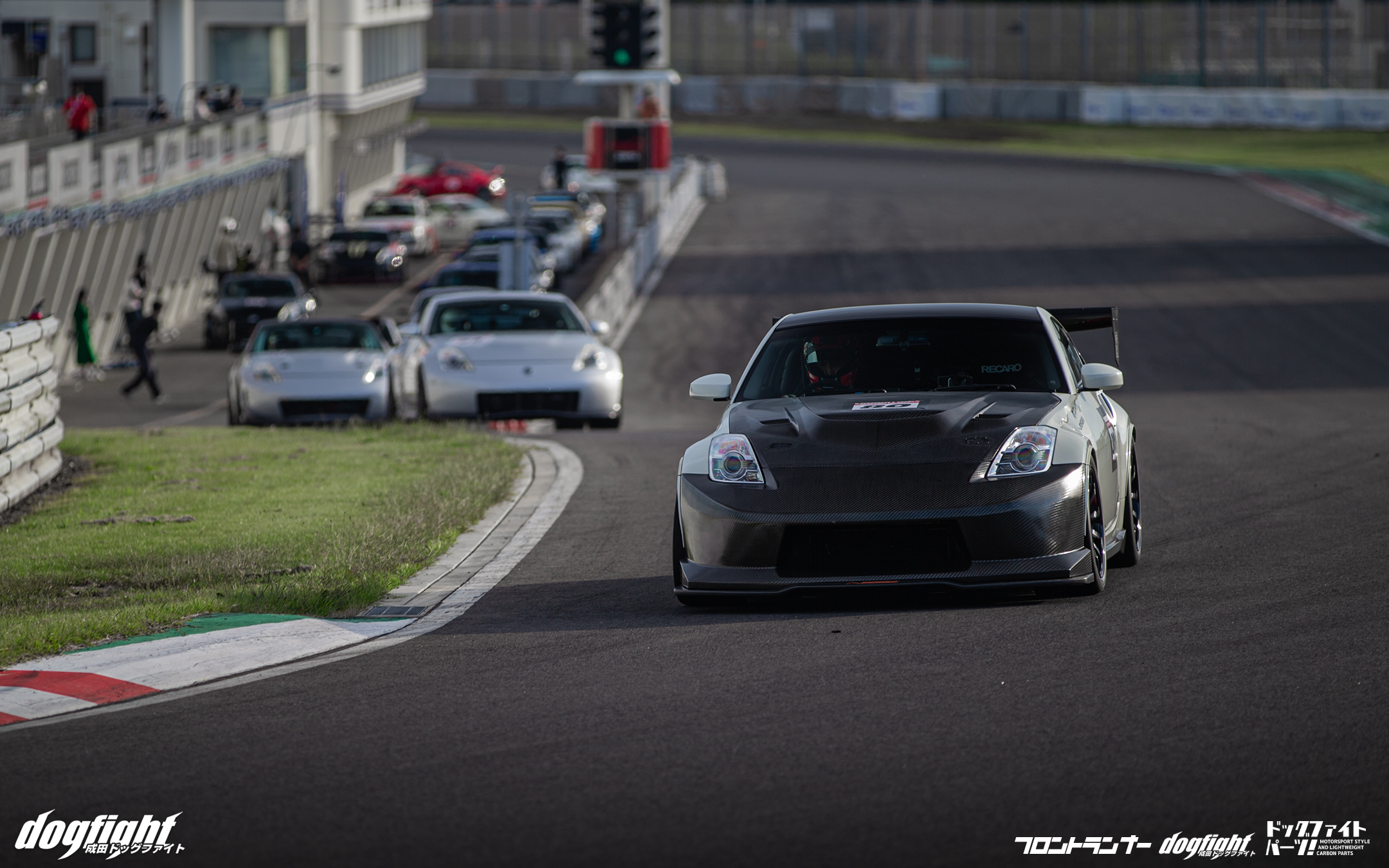 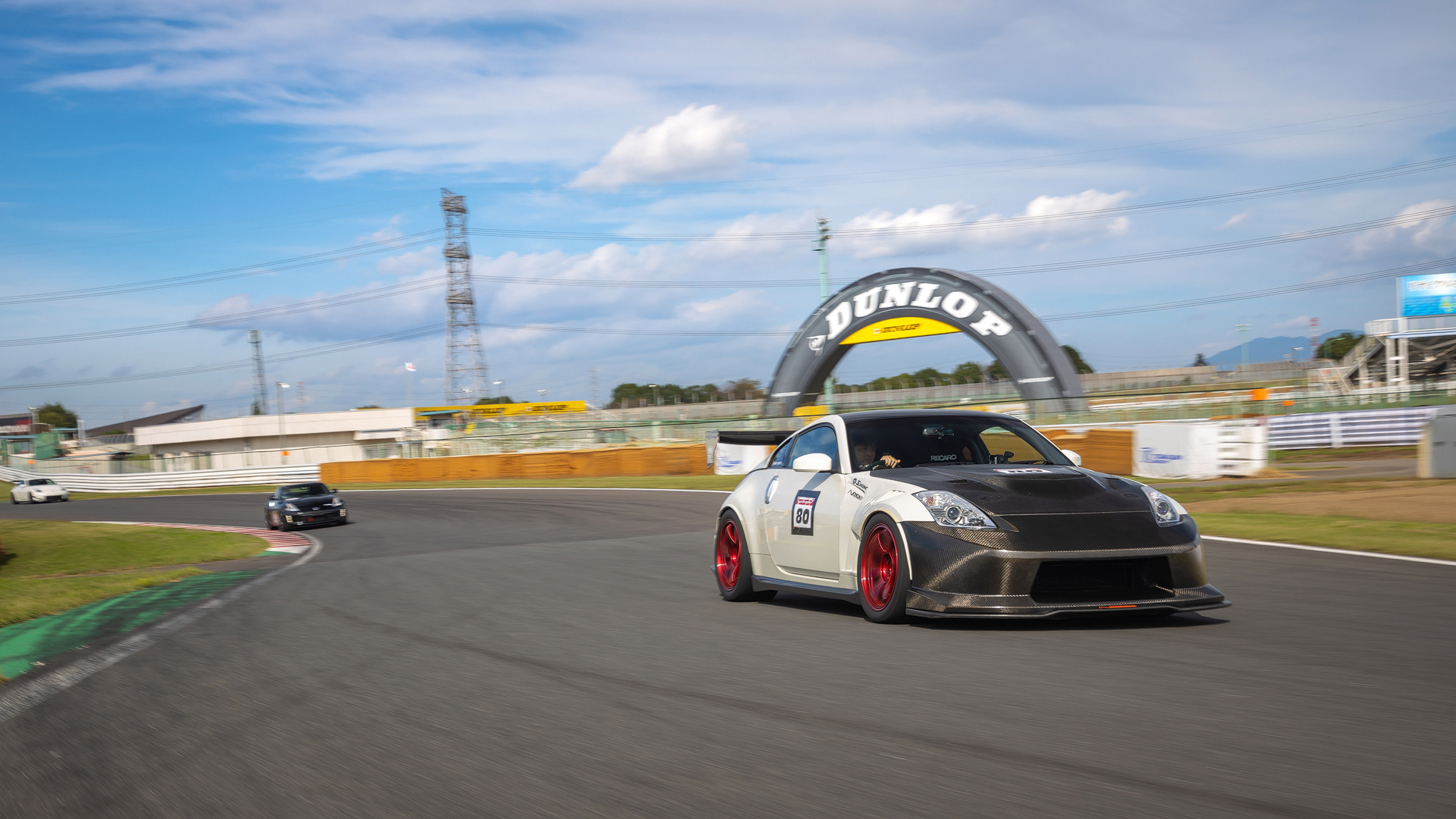 Haji was able to get out on track in the back of a van that had been repurposed for the day as a camera car.  He grabbed some really cool rollers that looked more like GT screen caps than reality. 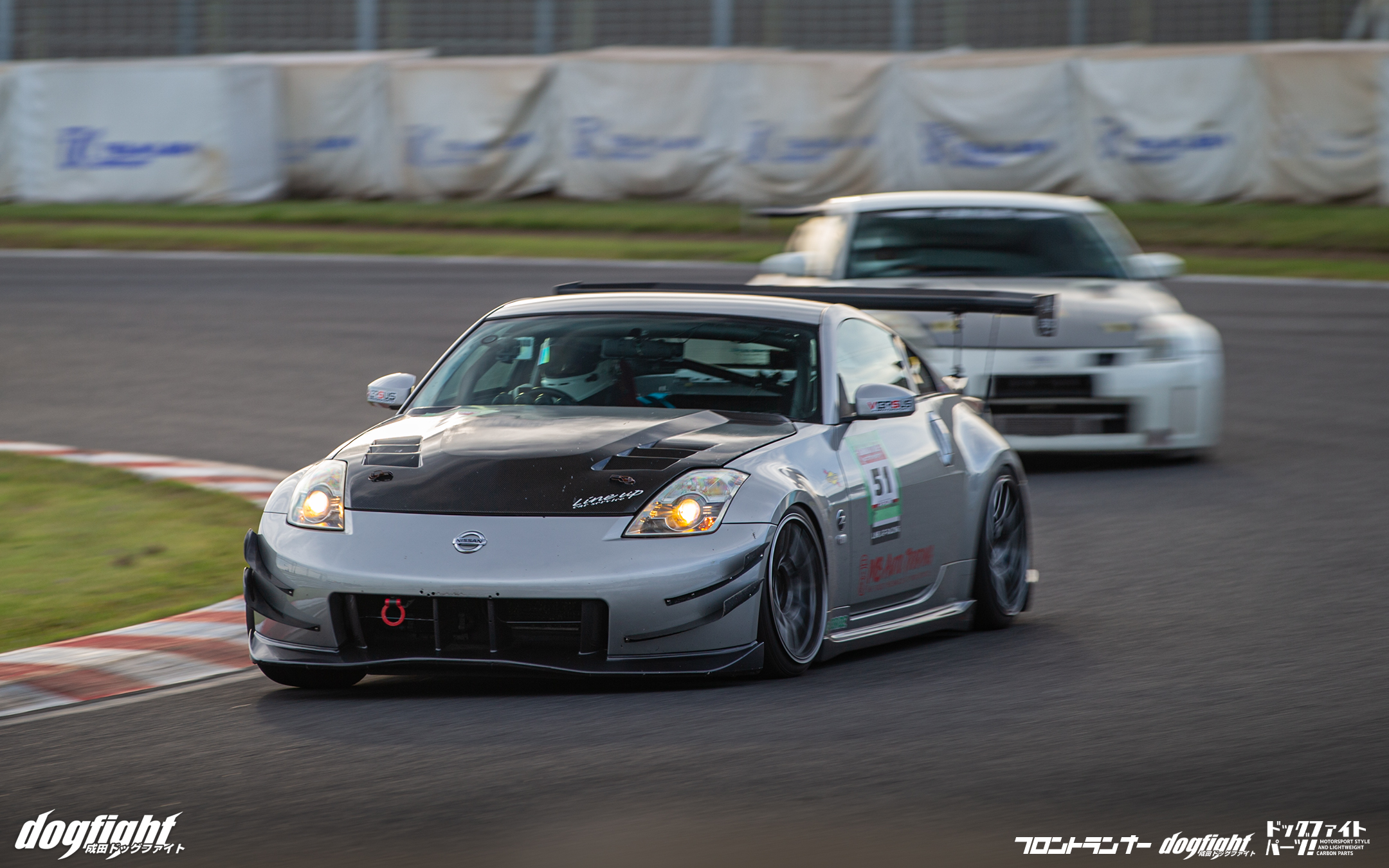 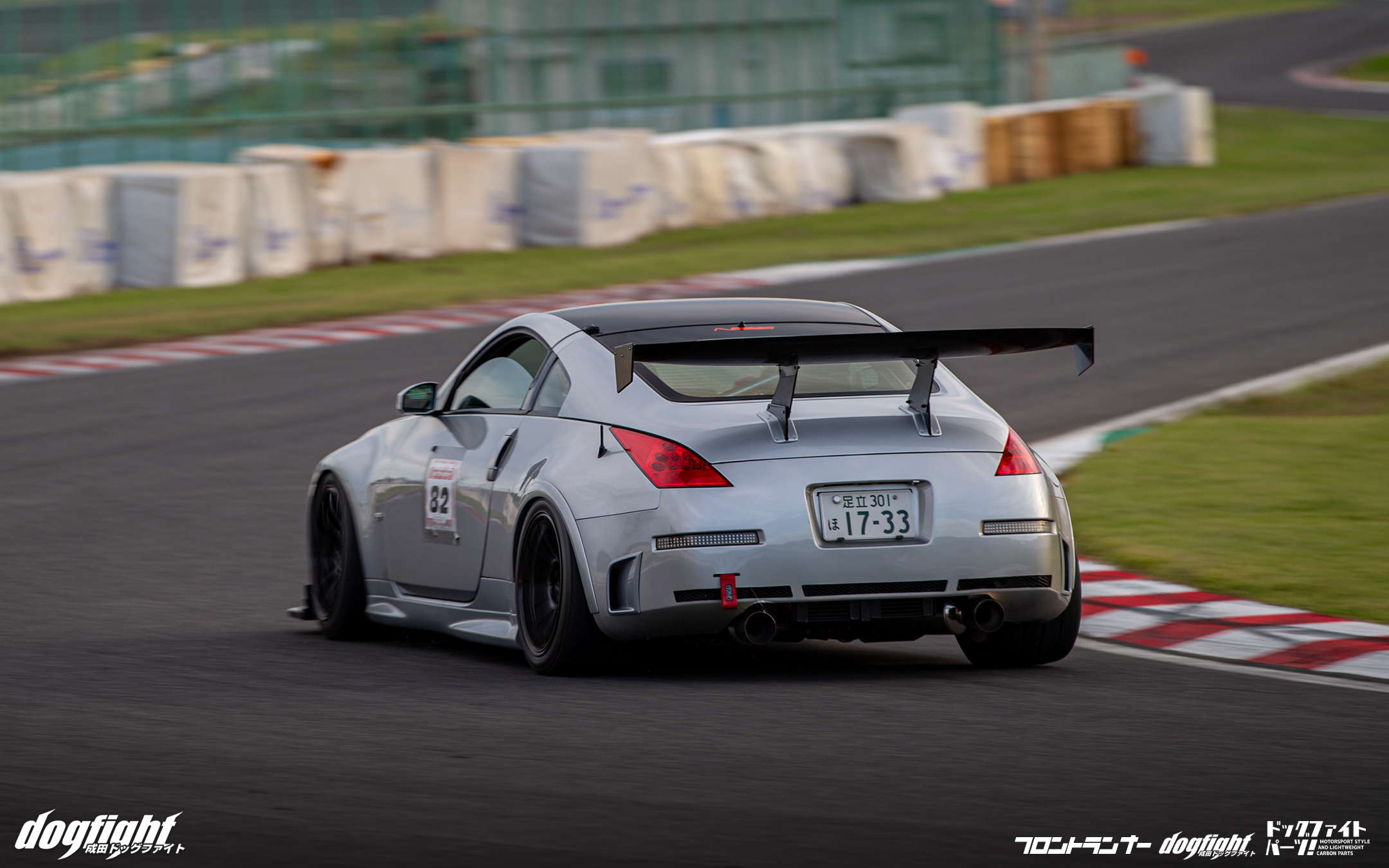 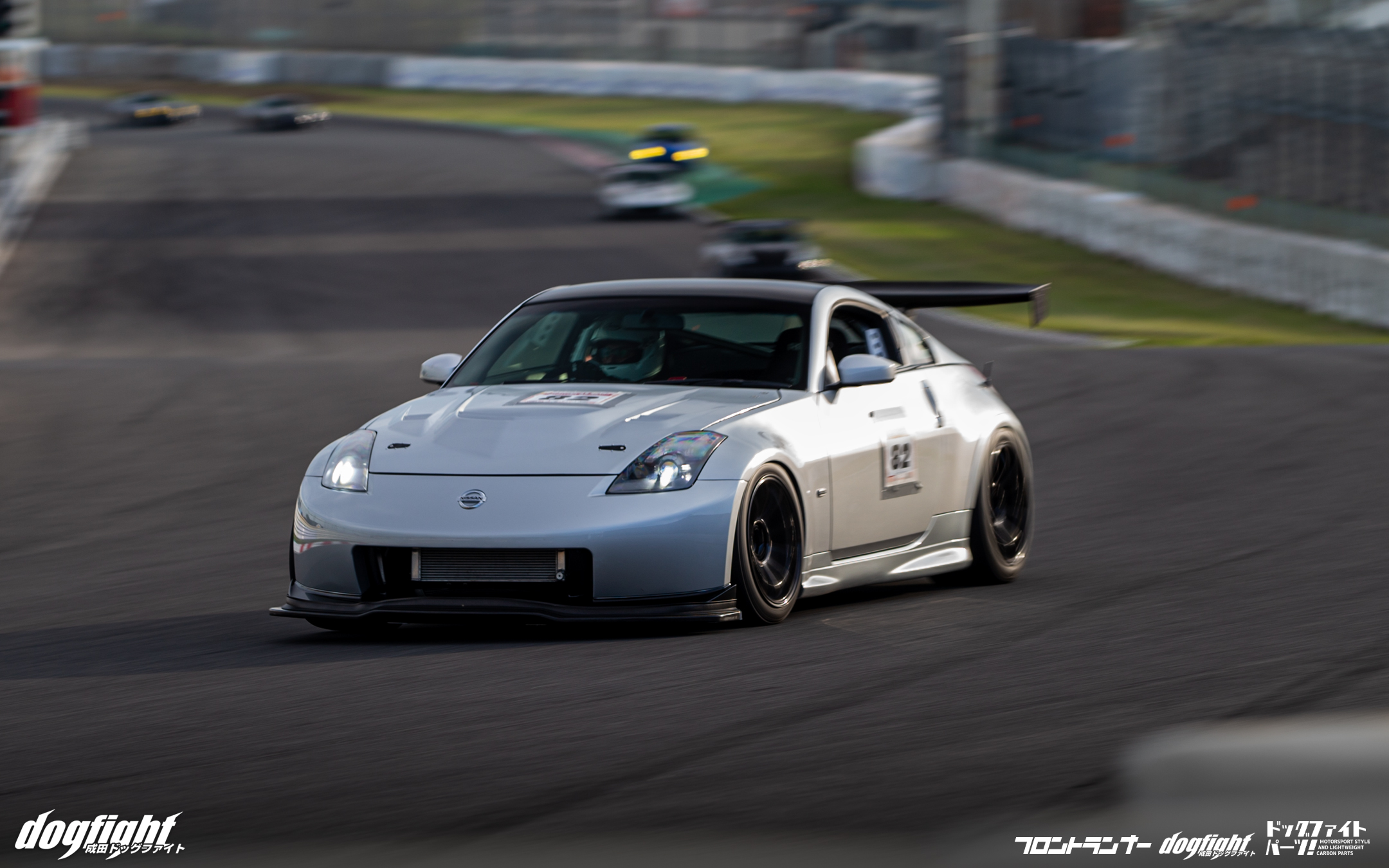 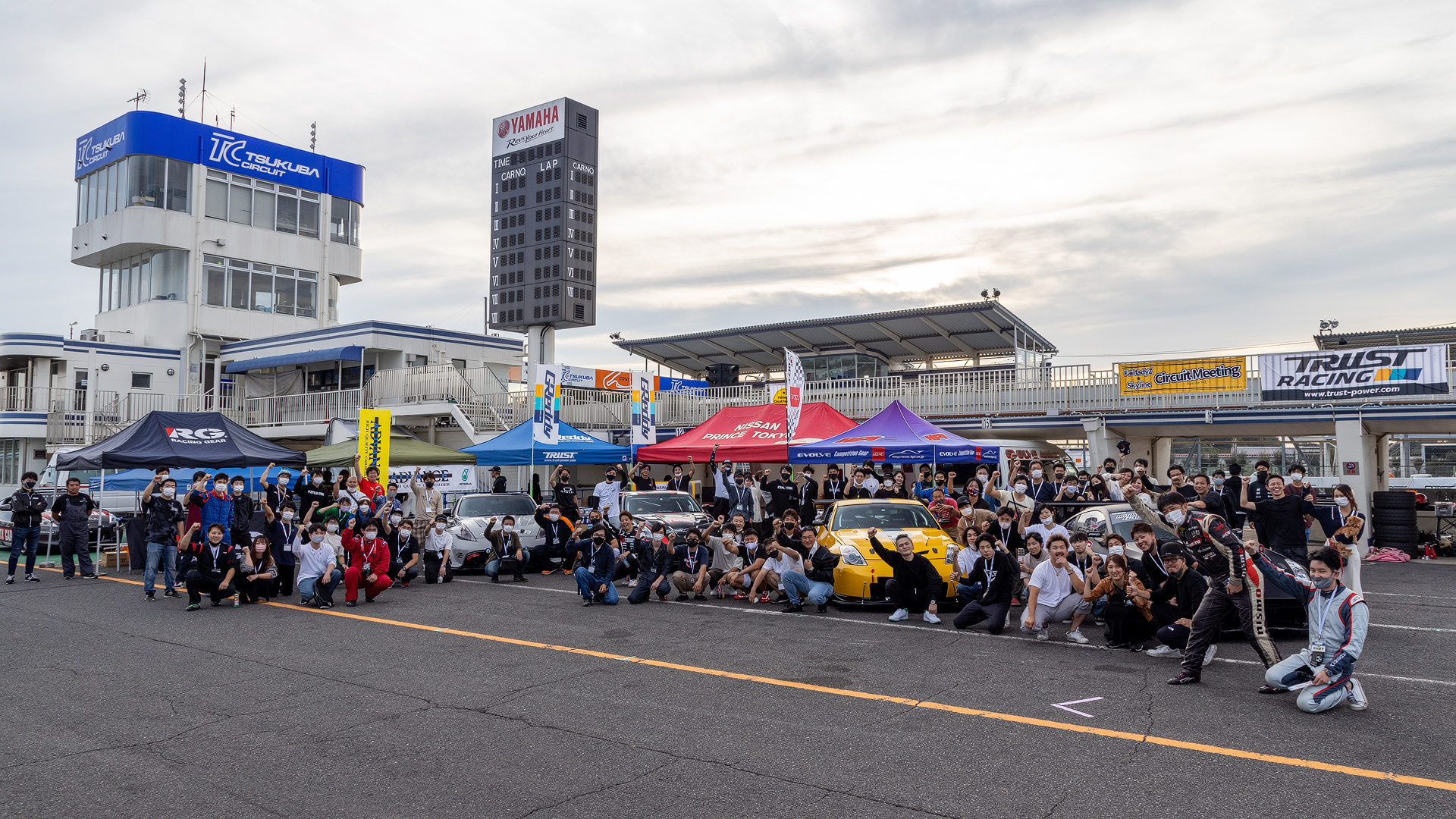 The event was closed out with an inclusive group photo as well as a じゃんけん大会 (rock-paper-scissors) competition for a variety of giveaways from sponsors and event patrons.

In addition to fastest time awards, they had awards for ‘best muffler sound’ and a ‘best custom’ awards among the cars that were running that day. 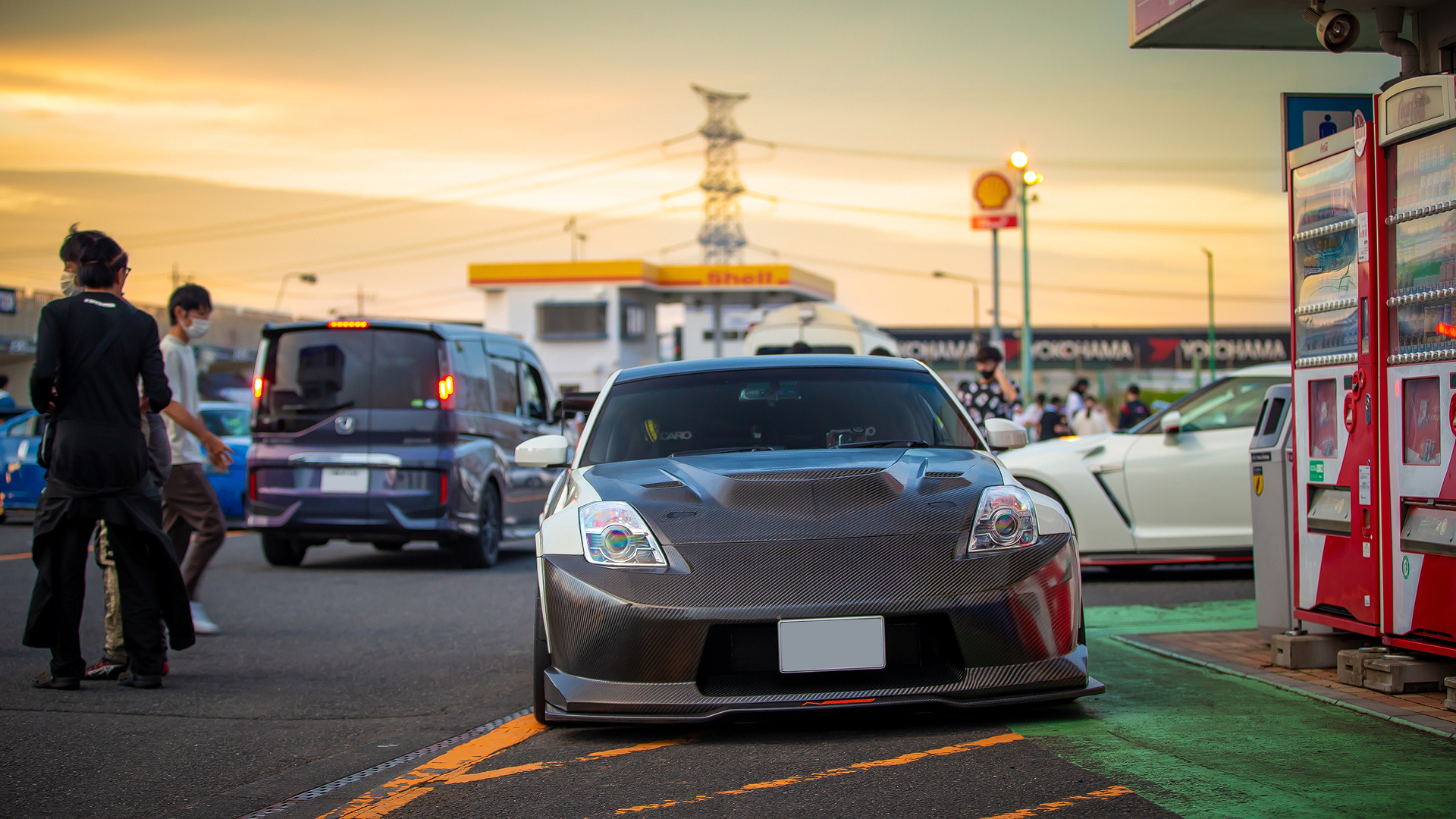 These type of circuit meetings are not always just good fun, but they serve to both strengthen and grow the motor sport community from the ground up.  Thank you to Tajima and friends for hosting, and many thanks to Haji for the photos.  You can view more on his blog here.