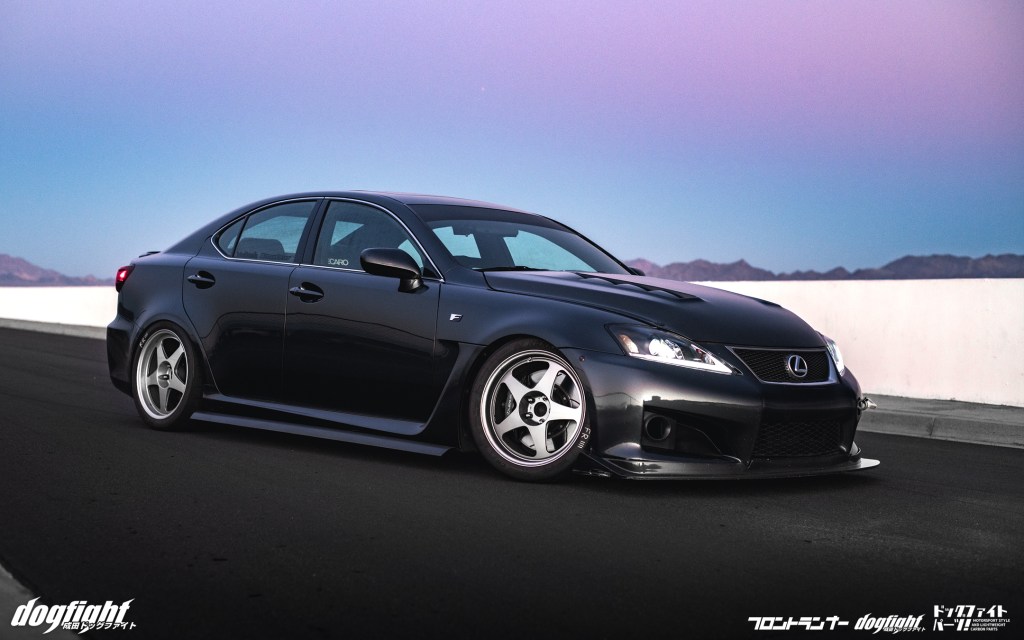 If you’re new to this series, it is a journal to log the progress with the Koyorad x NDF ISF build.  It reads as a personal blog.

We made the switch to 2k higher spring rates front and rear back in September, but due to our busy schedule hadn’t yet had an opportunity to test them until two weeks ago.  You can read about that install here – this post also has links back to the start of the project if you’re just now seeing this.  Club Racer was holding a Saturday/Sunday weekend event at Chuckwalla Valley Raceway and it was the perfect opportunity to collect some data on the new spring rates; especially considering the bowl at CVR was where the issue was most apparent.

The ISF would have the same CR1 tires on from previous events, and this weekend would be the 5th and 6th event on them.  I was contemplating getting a new set for this test, but would prefer the consistency for testing and wanted to use these tires to their limit – which was very close.  These tires were the same ones that had gotten the sidewalls cut up from the rear fender bolts earlier in the year.  Looking back on the records, I hadn’t driven CVR since March of 2021.  Back then the car was on older NT01s and I was able to clock a 2’04.9, down from the previous time of 2’04.4 set in January of 2021.  I had estimated that a 2’03 was possible with newer tires, or even a 2’02.999 in ideal conditions.  Well, the tires weren’t new, but they weren’t the same NT01, so I set my delta time at a 2’03, and personal goal of dipping into the 2’02’s for this event.

Aside from the Swift Springs and the rear pads (now Project Mu Type PS), the car has not been changed from it’s 2022 setup.  Aesthetically I swapped the generic carbon side strakes for a set of RS Future strakes.  They are a bit aggressive for the stock body, but we’re working on a winglet addition for the front lip to sort of balance it out. You can see the full mod list in this post. 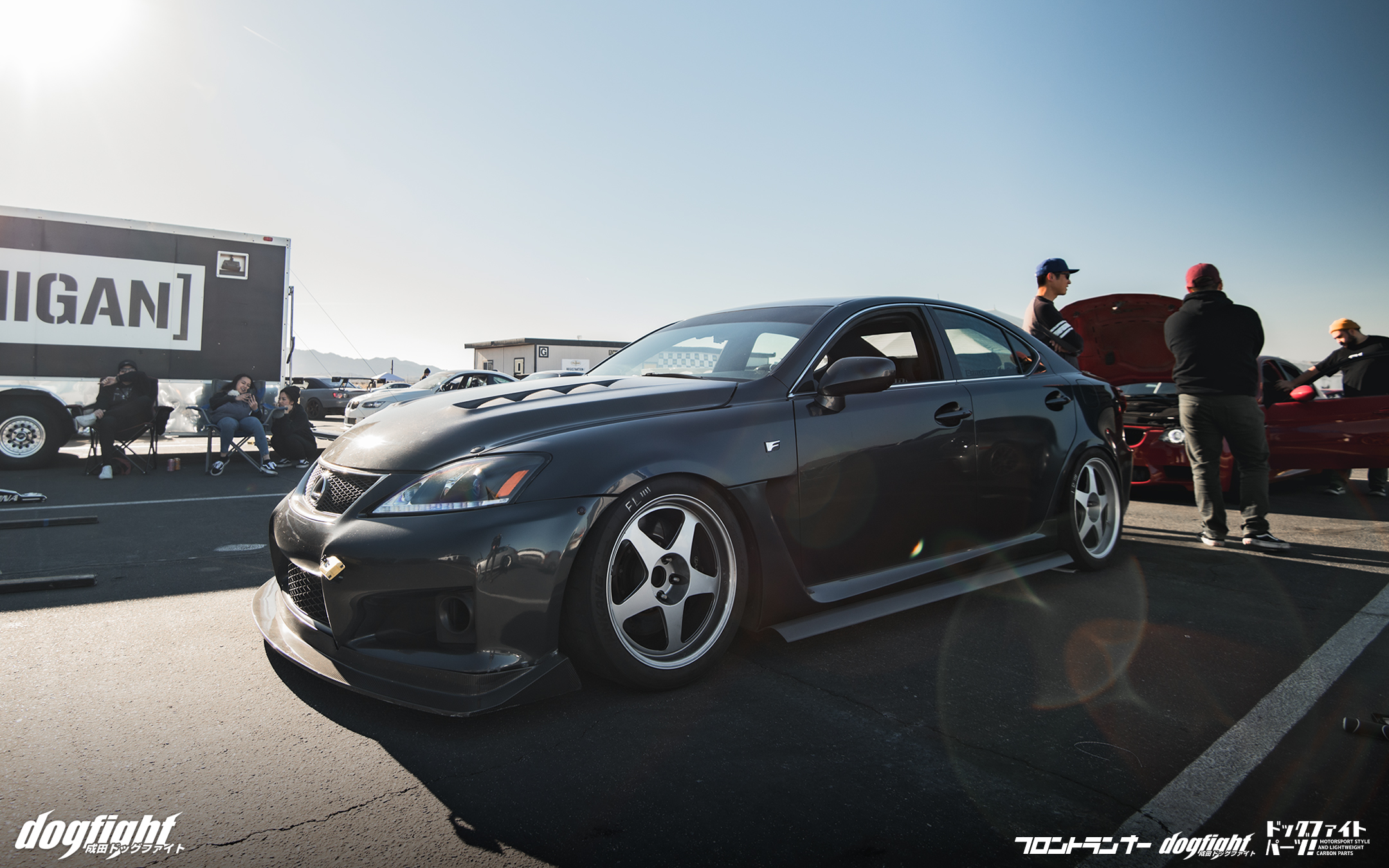 The conditions over the weekend were pretty ideal, with morning temps in the low 40s, and afternoon peaking in the high 60s.  Winds on Saturday were kept to a minimum, but kicked up pretty bad on Sunday.  Because I help run the Club Racer organization, I’m not usually able to take advantage of the morning sessions when conditions are most ideal, so my first run of the day was right before lunch.  When I went to prep the car to head out, I realized that my AIM Solo battery was dead – bummer, that means no data and no live timing.  Oh well, I went out anyway to feel out the track and tires, as I hadn’t driven CVR in over a year.

On first impression, the slightly stiffer spring rate was actually noticeable in a positive way.  However, on the first pass through the bowl, I also noticed that a 2k addition was not nearly enough.  Without sacrificing the current ride height, another 2k or 4k would be necessary both front and rear.  However with an increase like that, I may risk ending up with an over-sprung damper.  It’s crossroads like this that make building a ‘street’ car difficult.  The need to sacrifice comfortability and every day drivability in the pursuit of going quicker on track is a difficult one to make.  Especially when the entire purpose of this build is to to ensure we retain all that.  Bumping up to a 16k/14k spring rate on the KW’s would be the first step in taking the luxury out of the luxury sedan.  I pulled in after a couple hot laps, adjusted tire pressure, and went back out again for one more open lap in the session, not knowing the lap times I had been clocking. 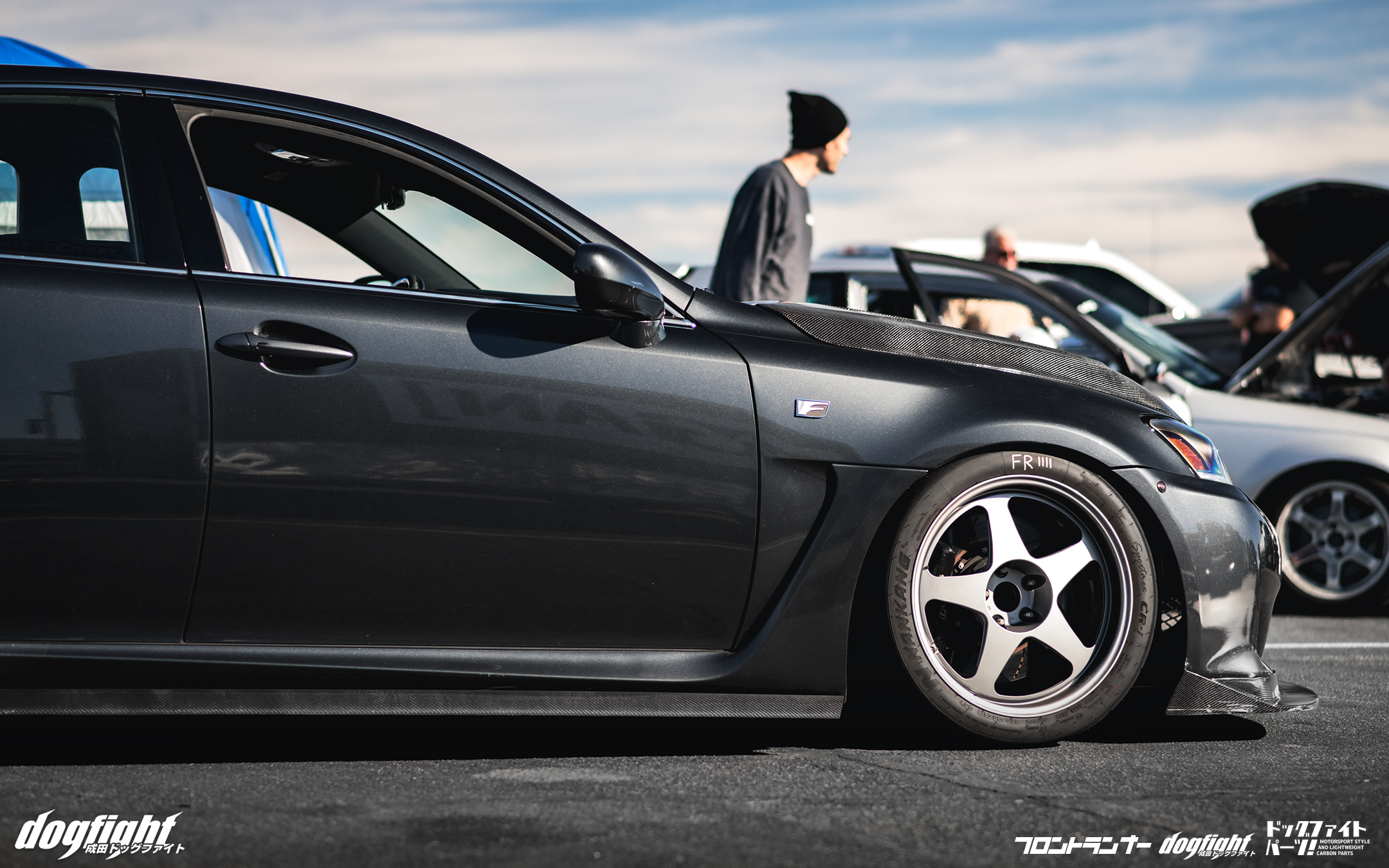 I botched the next lap out and just came back in after a cool down.  The session had been checkered and I didn’t have time for another attempt.  For some reason my brake pedal had felt extremely sloppy and had no real feel until pressed more than half way down – despite bleeding them proficiently the week before when I changed the pads.  I counseled with Will for a bit and we decided to try and bleed them again track side, thinking that the ABS would have been cycled already on track.  The issue ended up not being anything serious, and while bleeding the brakes didn’t actually improve the braking, I came to realize that perhaps I had just forgotten what the ISF brakes felt like. 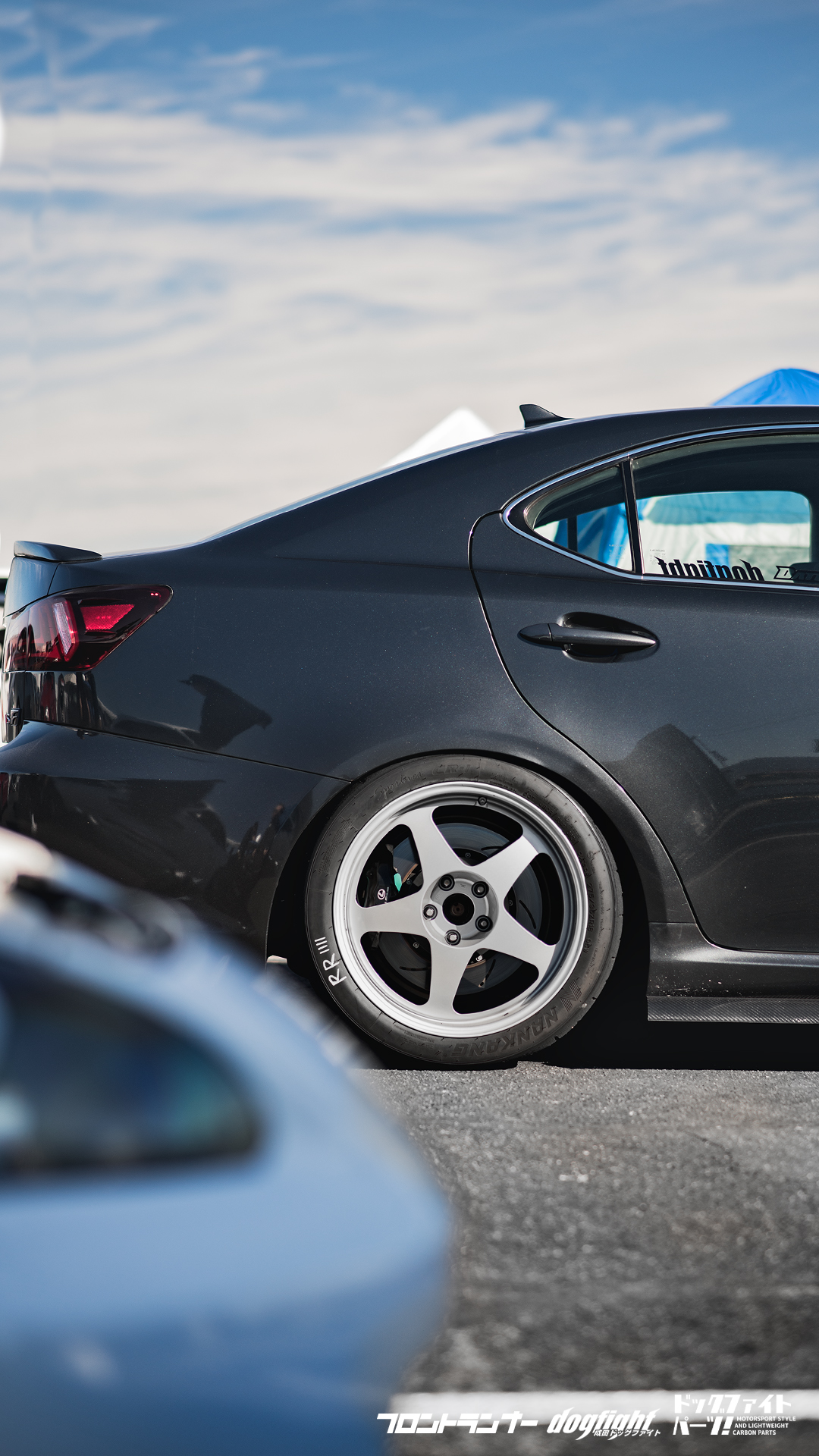 Luckily I had the foresight to run and grab a transponder from Kristian after realizing my Solo battery was dead.  So after I pulled in, and we dealt with the brake situation, I went to check the times from the session. 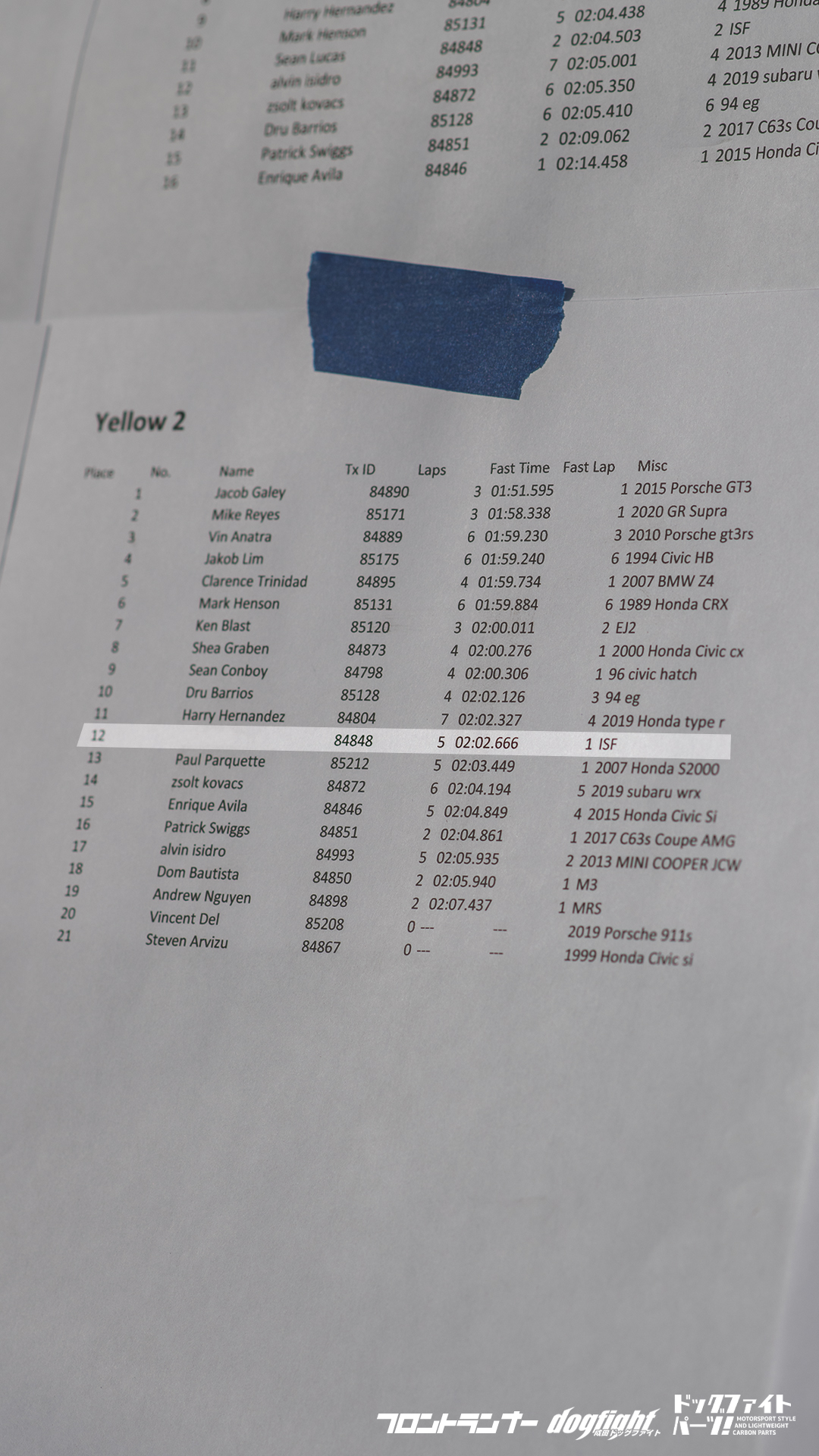 I had tripped the clock at a 2’02.666 – which was well within my personal goal for the day.  To hit it so soon was a sign that we were on the right track as far as changes to the car went.  This could also be attributed to tire compound as well, as the CR1’s, albeit rather old, should still be faster than the NT01.

I didn’t get to drive much more that day, aside from one more session in the afternoon in which I put down consistent 2’03.0XX laps.  Whether it be track temp or ambient air temp, tires, or my driving, I couldn’t get back into the 2’02’s. 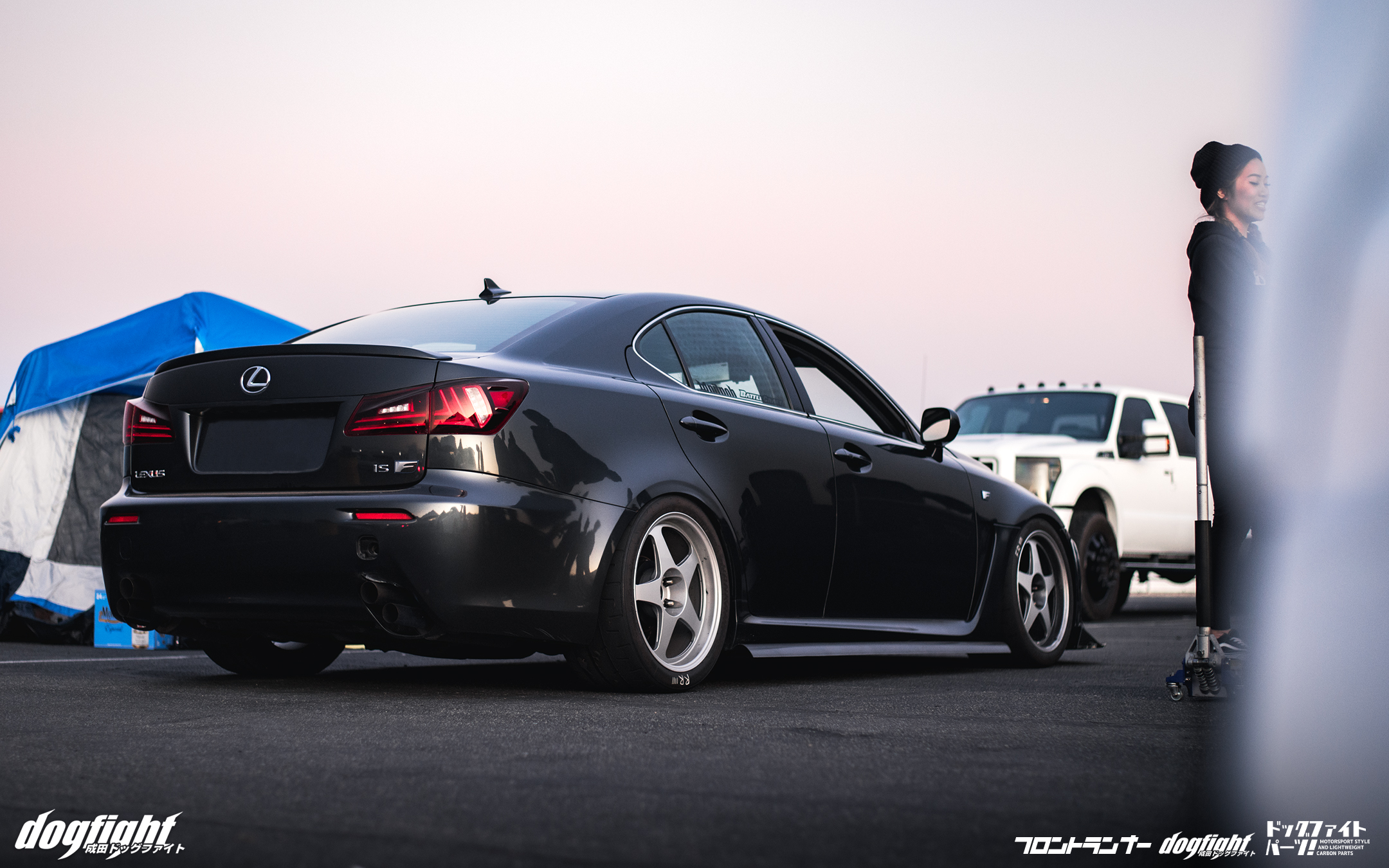 I went ahead and parked it for the day and decided to save the tires for Sunday’s earlier sessions. 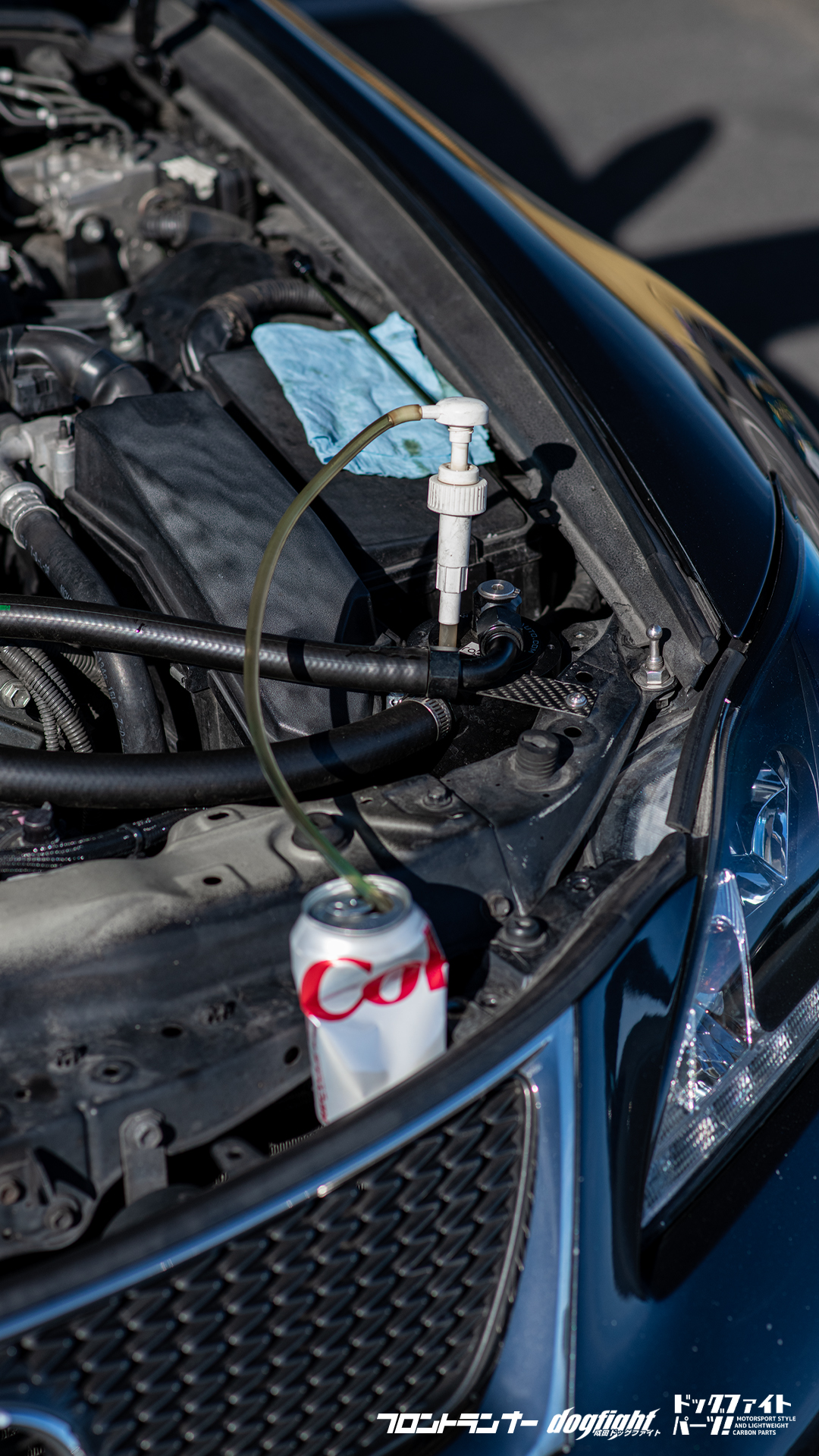 Happy to report the new Radium catch can setup is so much better than the previous one.  I was able to go a full session, sometimes two sessions depending on how many laps I drove, before having to empty it. 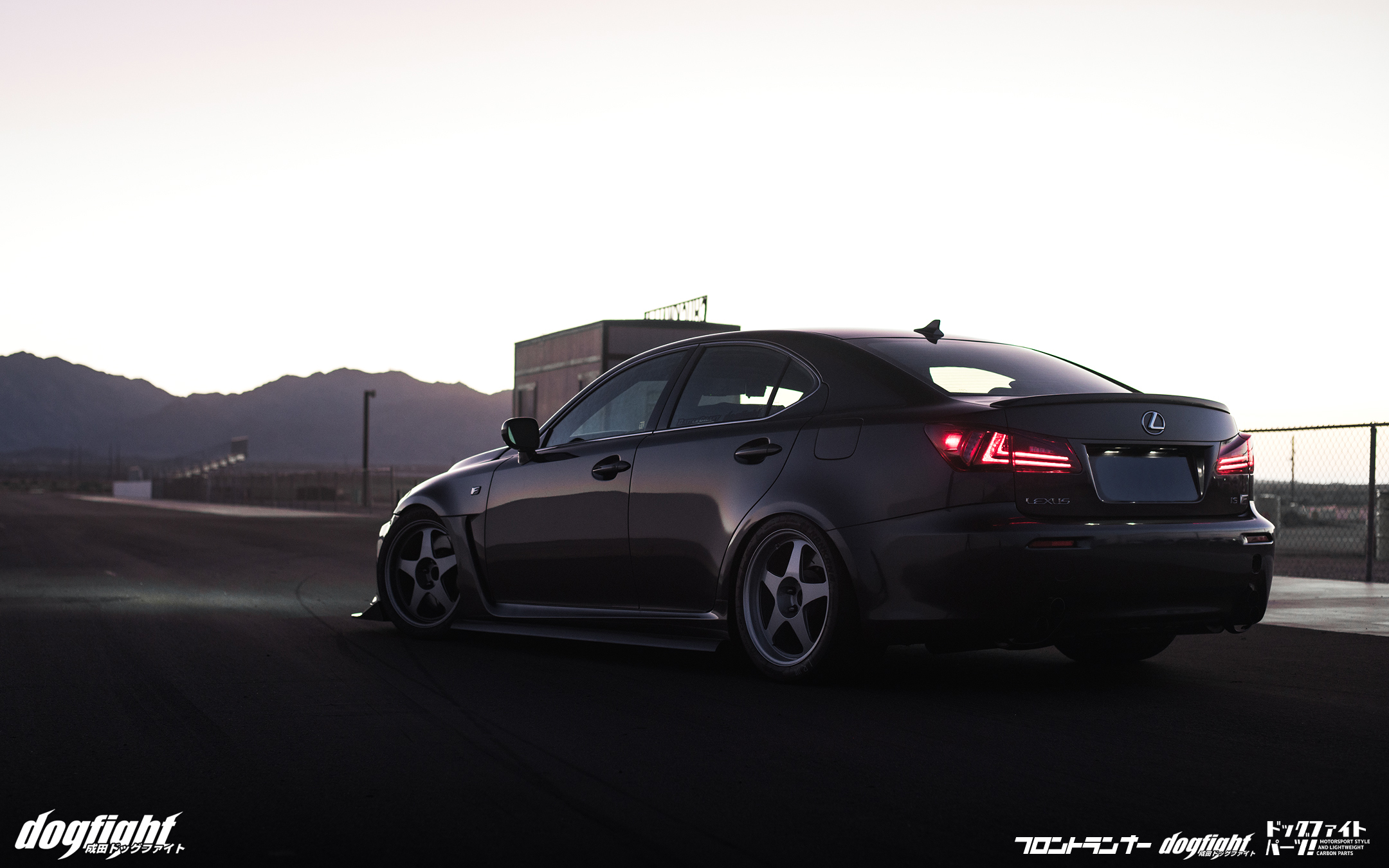 At the end of the day Justin and I took some photos in the hot pit during sunset. 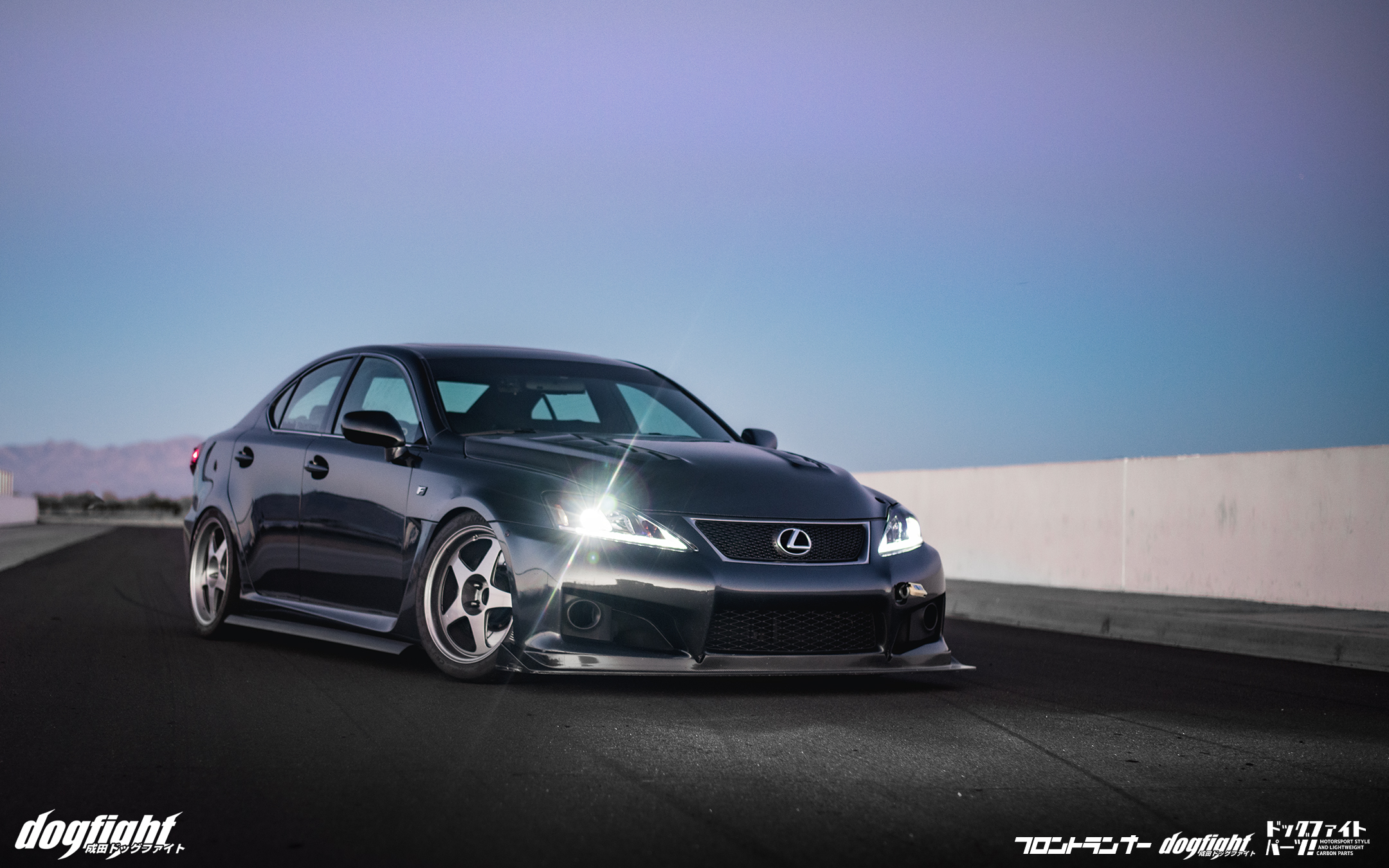 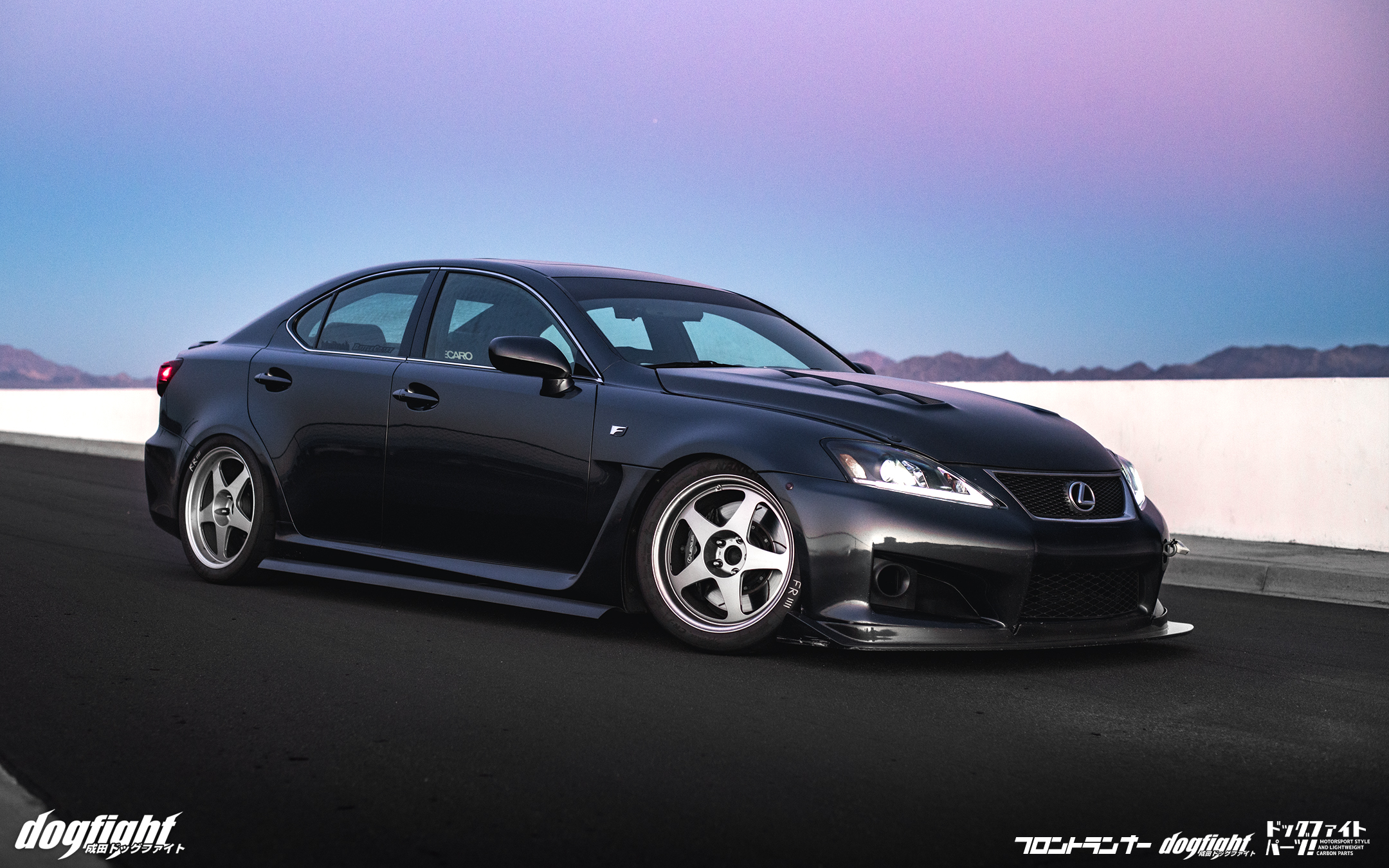 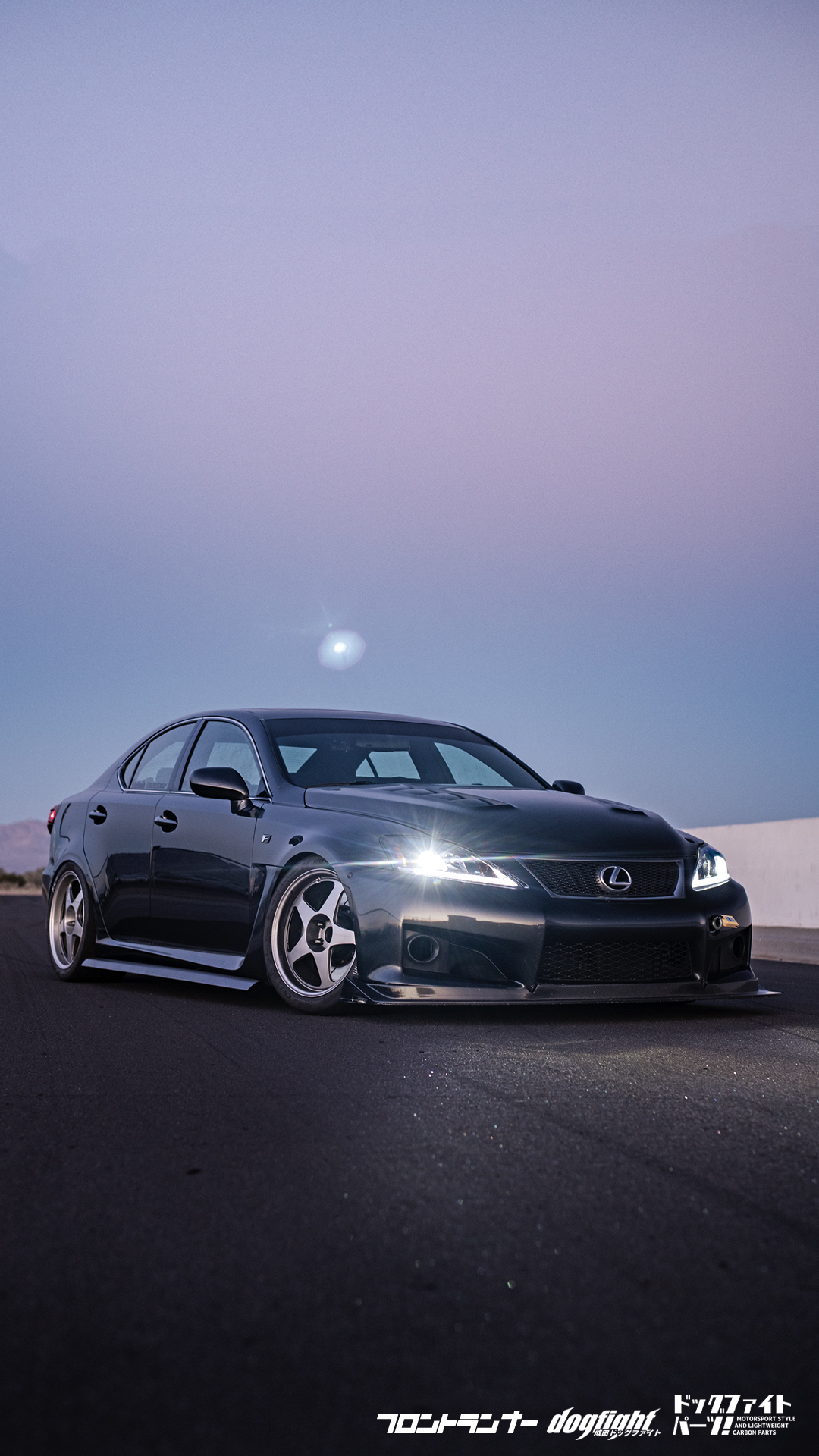 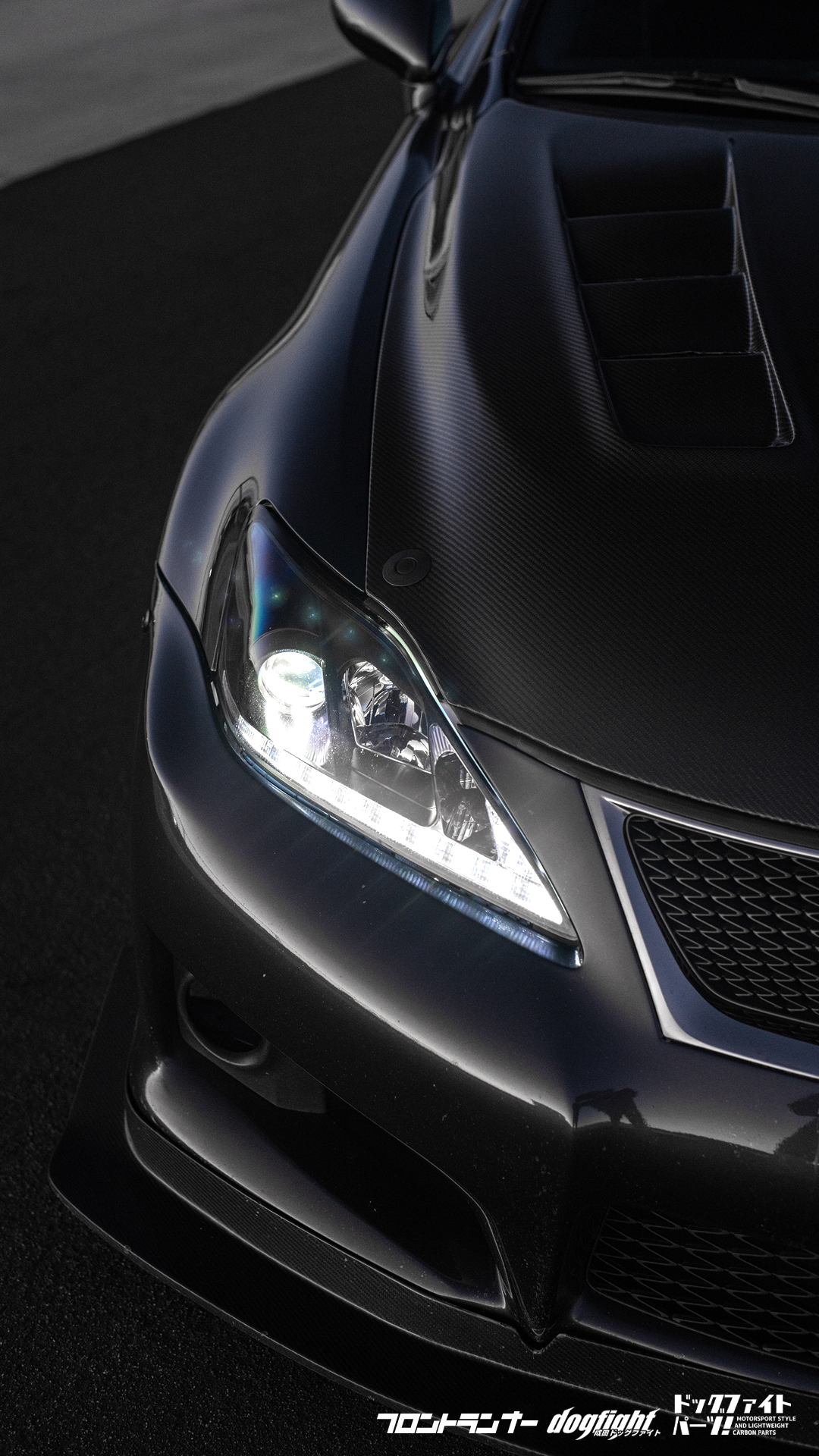 The aftermarket headlights on the ISF were already installed when I bought the car, and while they look good, they sure don’t work very well. 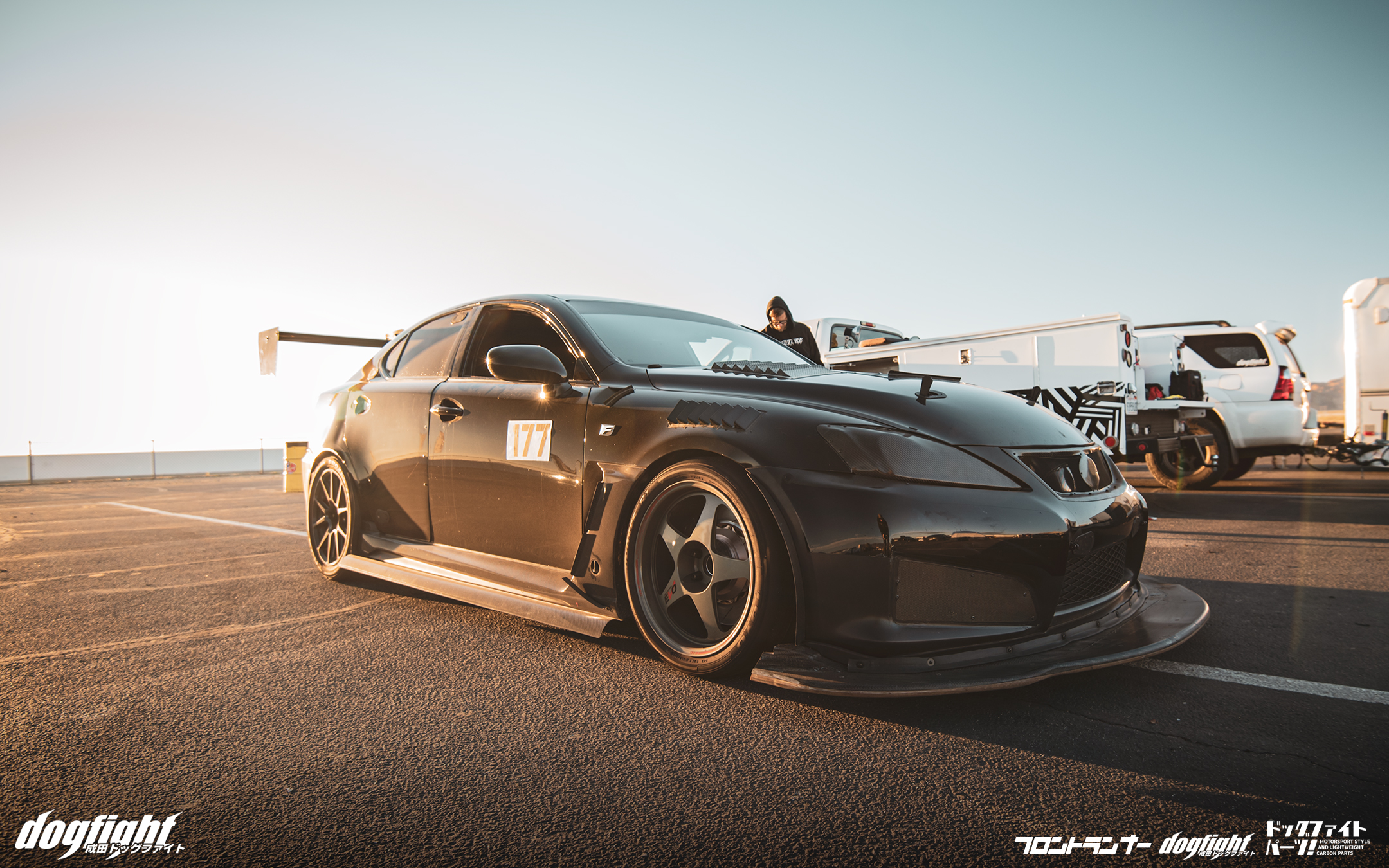 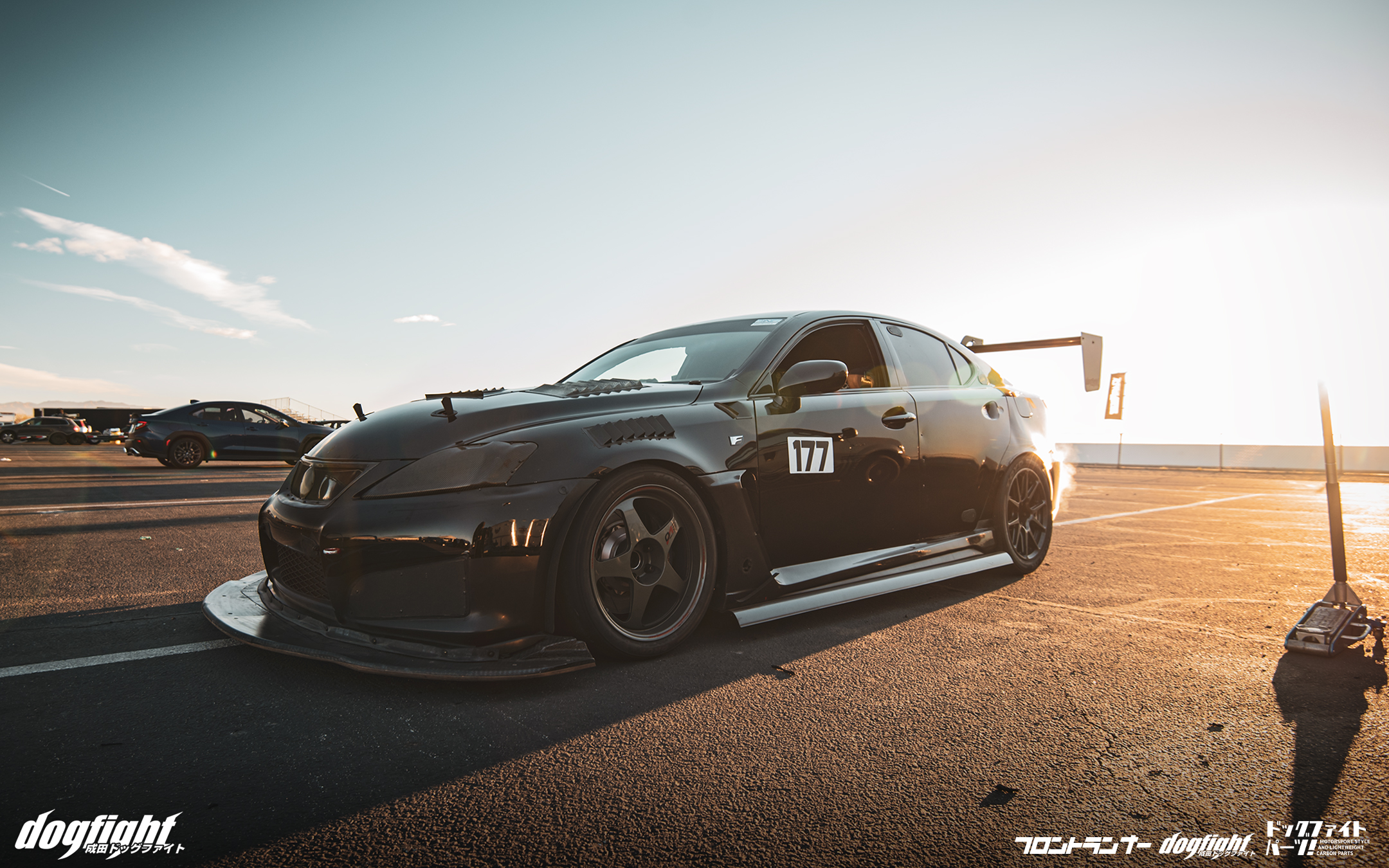 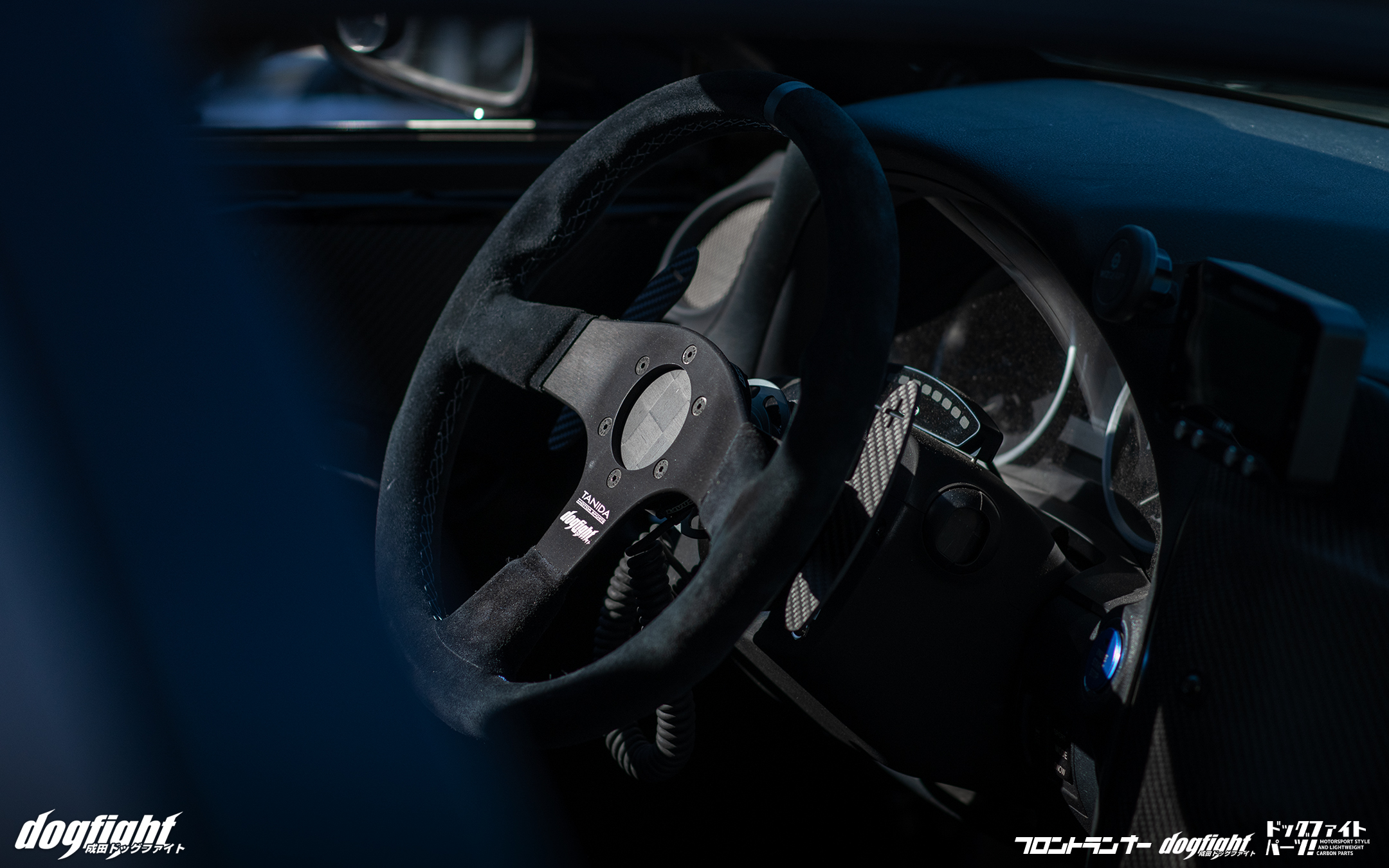 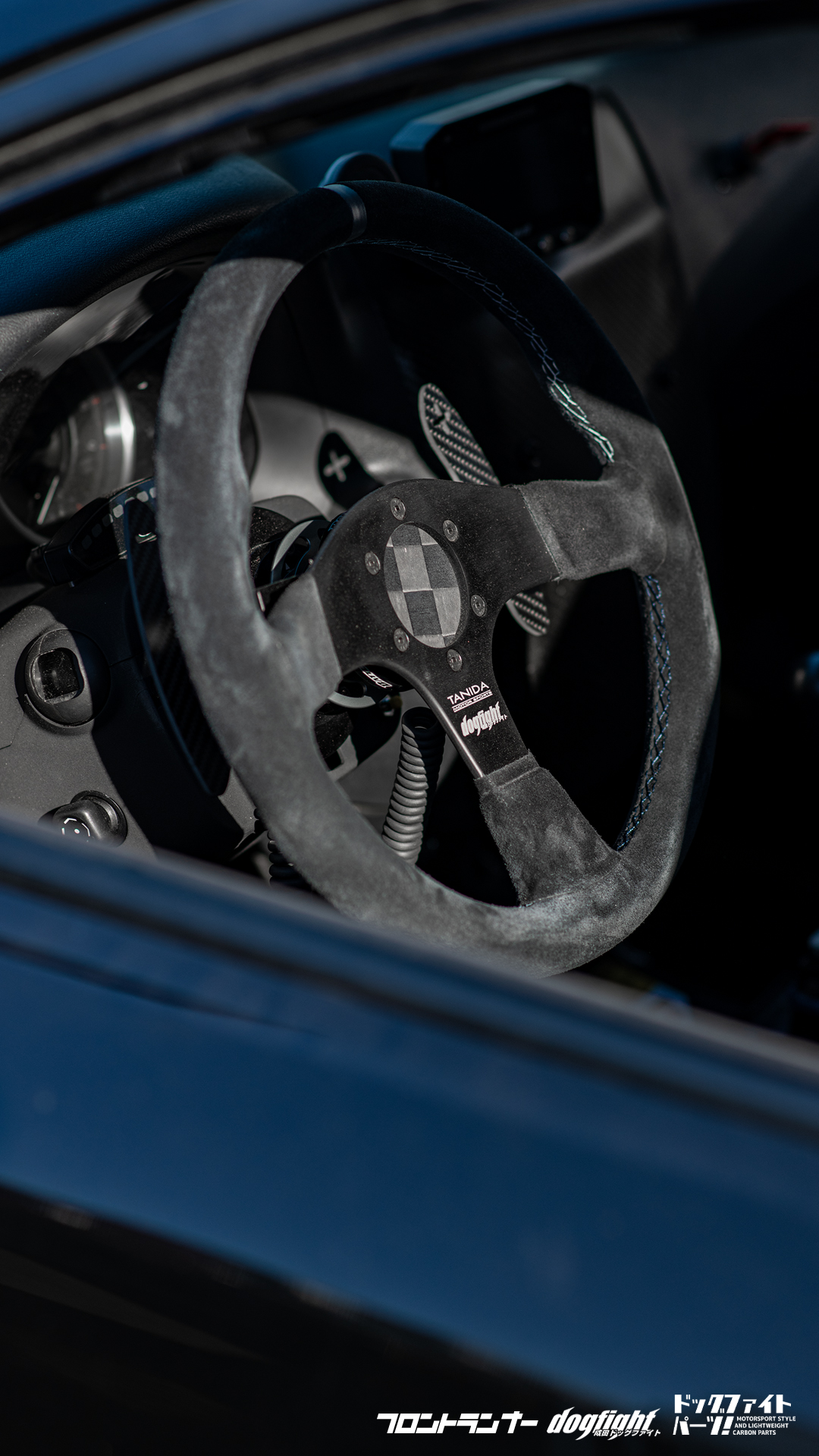 Will had my steering wheel and paddle shifter installed to test on track over the weekend.  Will and I pieced this together and he was able to install it in his car with a bit of wizardry a few days before the event.  It worked flawlessly, and the next step is to integrate it into my car while retaining the stocks, and hopefully the cruise control switch assembly – although it may have to be remounted elsewhere.  The magnetic shifters are so much nicer than the OE ones.

Will gave me the opportunity to take his car out on track to compare the brakes to mine when I thought I was having issues.  Even babying the car around the track I was able to get a 1’58, rather effortlessly.  With Will taking almost 1,000 pounds out of the car, It didn’t even feel like an ISF.

The next morning I had high hopes of besting the 2’02.66 from the day before, however conditions on Sunday were not as good.  The wind picked up and by the time I got on track it was much warmer and dustier. I went out much more on Sunday than I did on Saturday, and although putting down consistent 2’03.0XX times lap after lap, I couldn’t improve enough to get back into the 2’02’s.

On one of my final goes, I pushed the tires a bit too far and the car understeered exiting turn 7 and I went two off where the curbing is in it’s worst state.  I ended up tearing a small part of the front of the skirt, and blemishing the bottom of the rear quarter panel a bit.  I took it as a sign to hang it up. 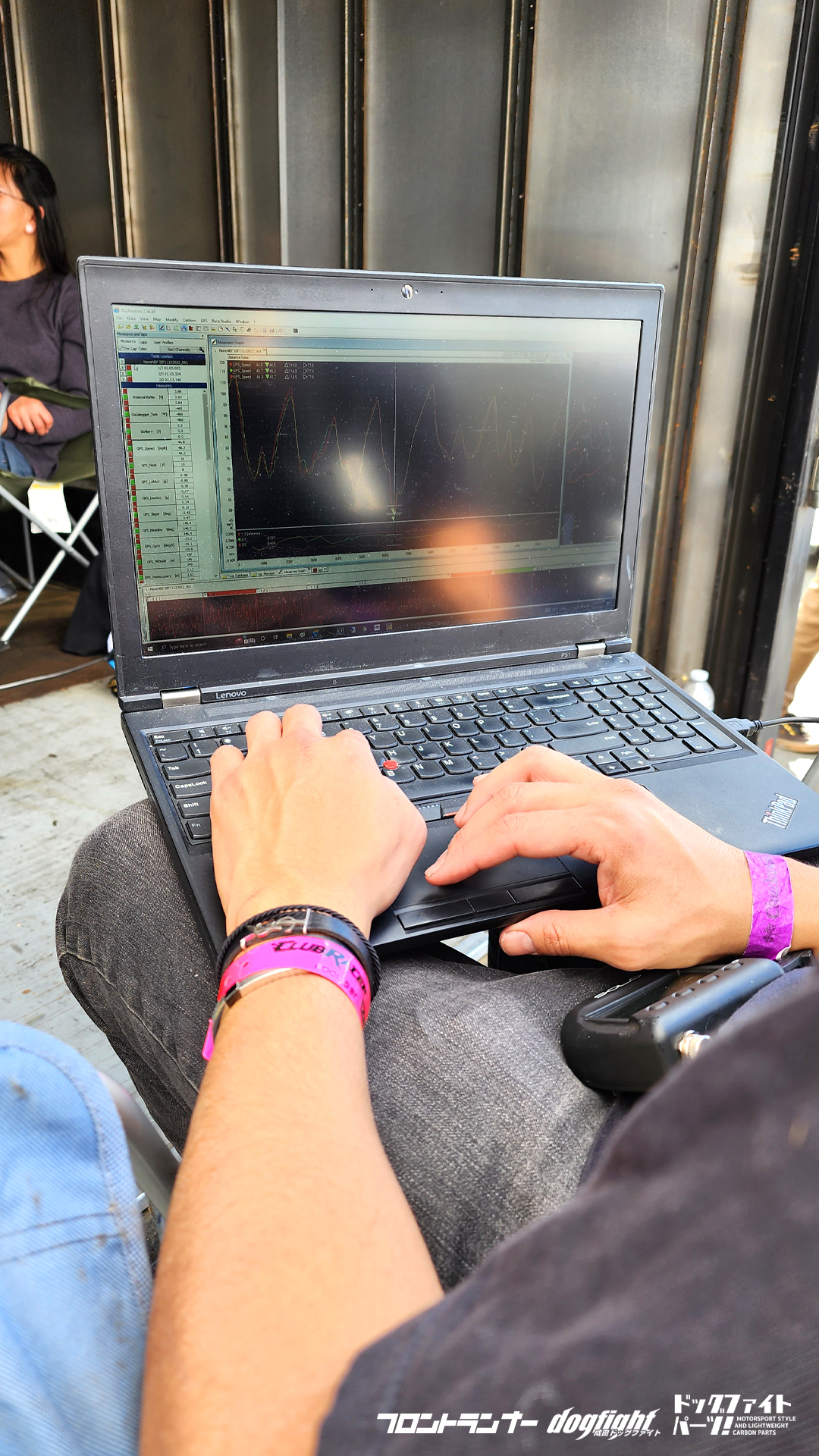 Luckily my AIM charged overnight and I was able to download the 2’03 flat laps for Amir to overlay and analyze.  While we didn’t have the 2’02.6 lap, the predictive best lap time from the laps we overlaid was a 2’02.1.  Which means, if my funny math is right, that a 2’01 could actually have been obtainable with the car as is.  That’s something I never thought would have been possible with the minimal modifications done to this car.  It truly is a phenomenally built car. 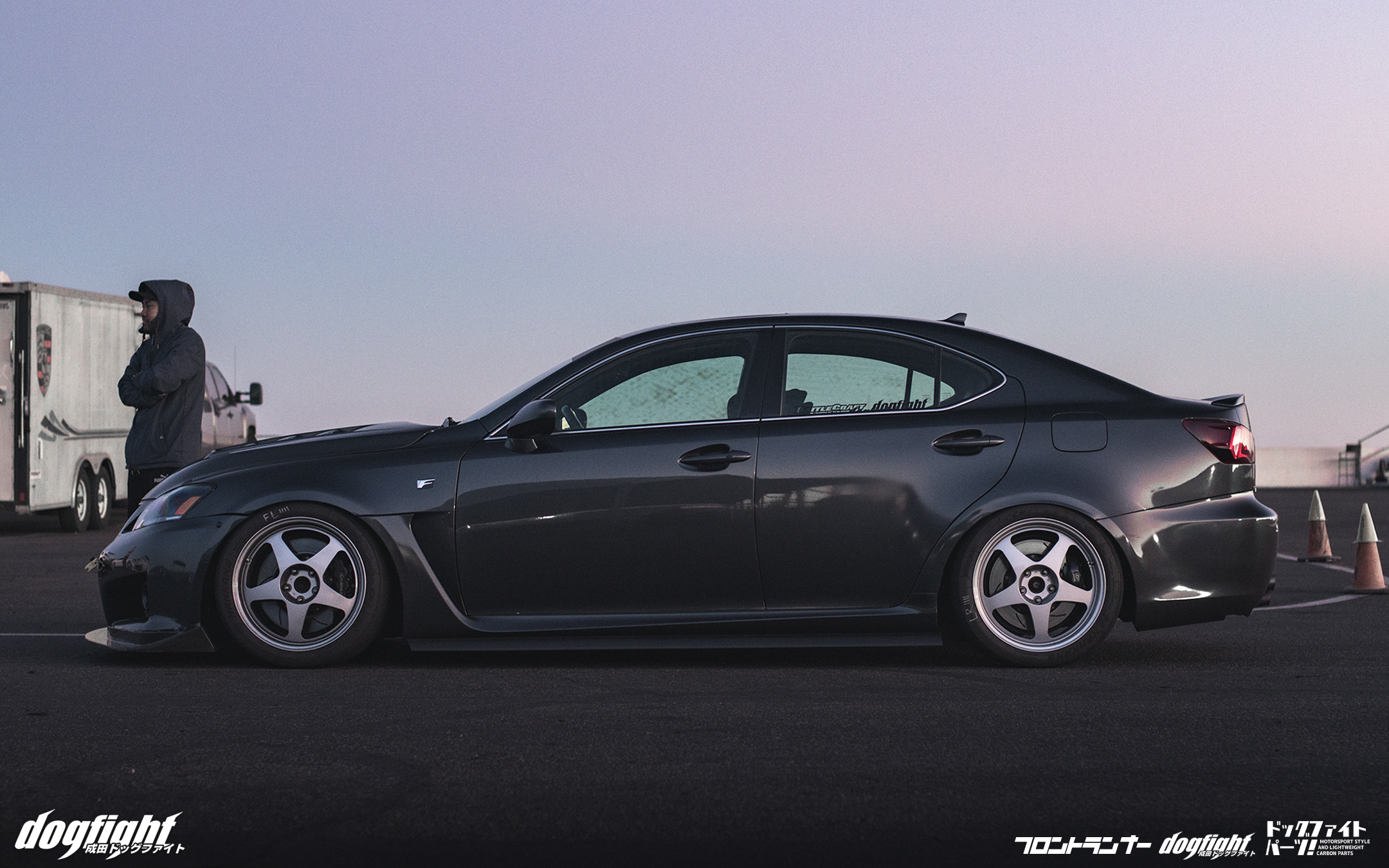 Which look do you prefer? 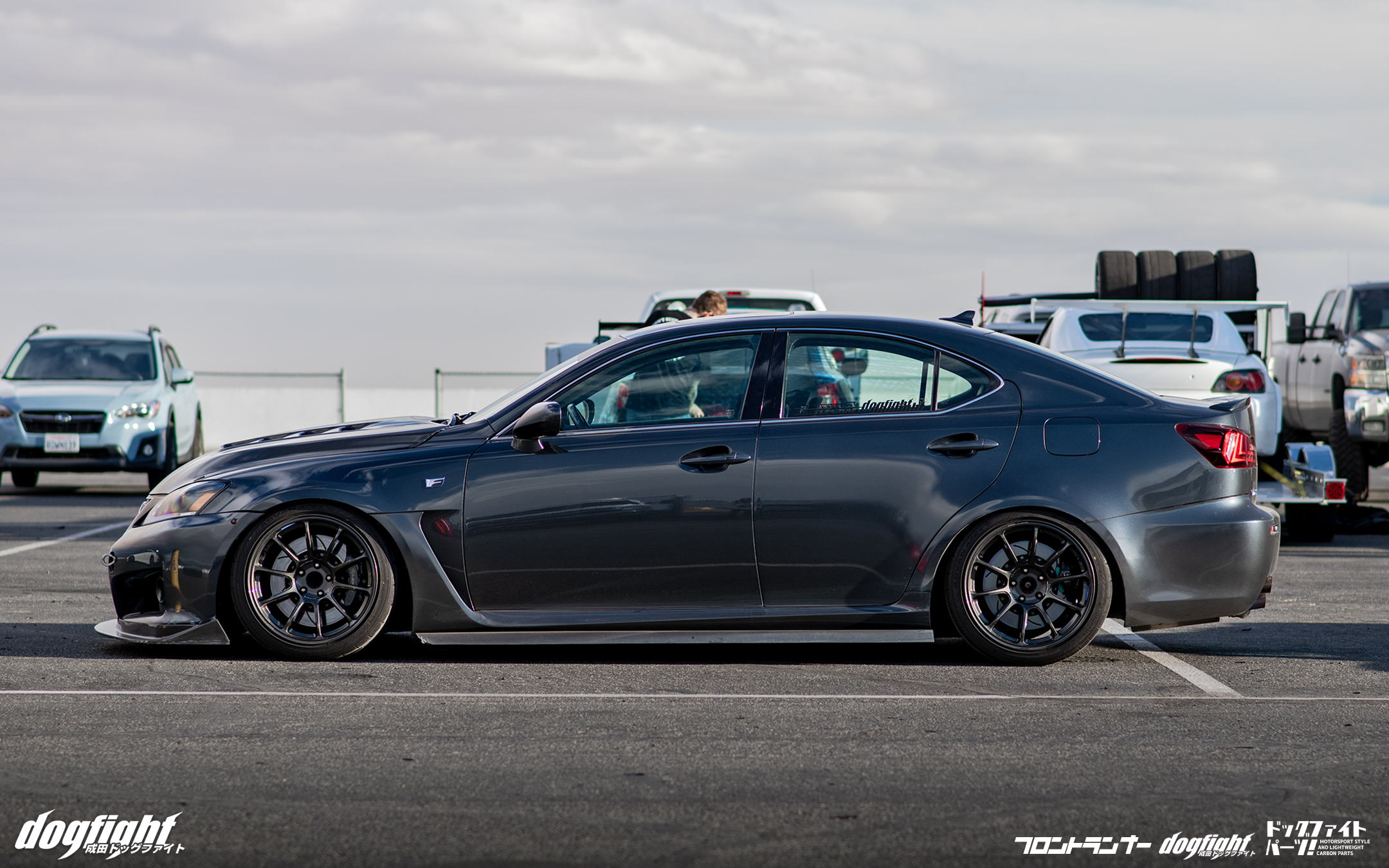 I swapped the Regas for the ZE40s with the daily tires on for the drive home.  The weather forecast had heavy rain on our drive home and I definitely didn’t trust the old CR1s to get me home safely haha.  Overall a successful test, with some good data gathered that allows me to adjust my goals a bit going forward. 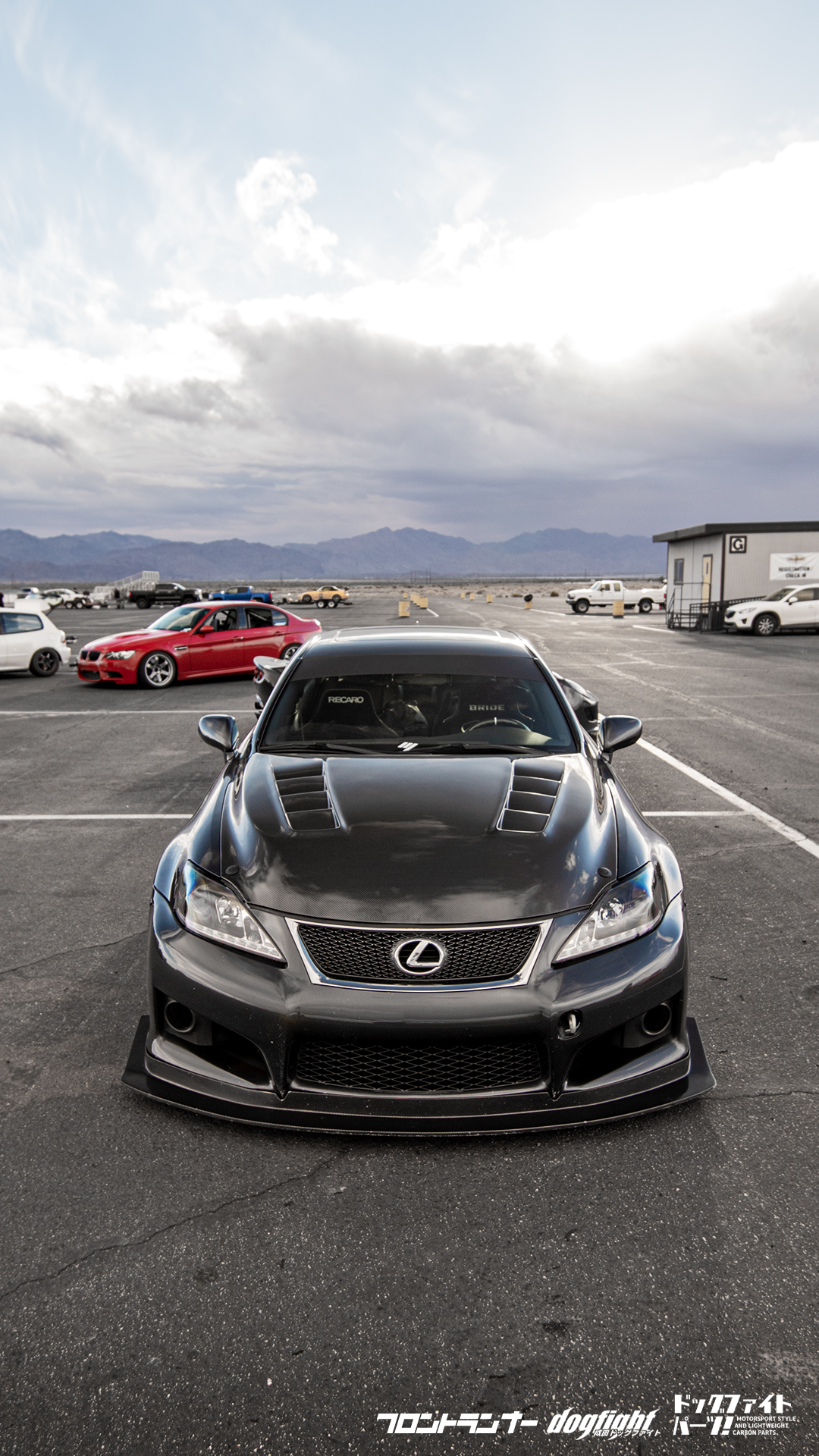 The ISF is so large, you can almost hide an entire Lotus behind it width wise.

I still need to find a good way to mount my GoPro, as again, I do not have in-car footage to use.

(SAME SET OF TIRES EACH TIME)