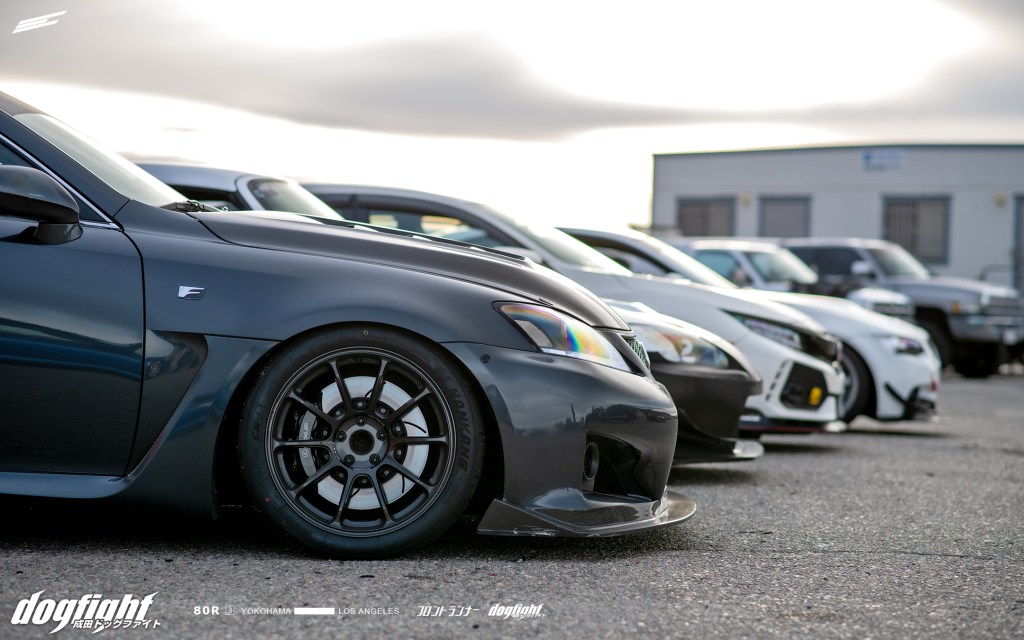 Looking back on past articles, it has been quite awhile since we’ve seen an update so I’ll do my best to recap the progress thus far.  If you’re new to the project, you can read through the previous posts here: V.1, V.2, V.3, V.4

While our occupancy behind the scenes accounted for the majority of the delays in this project, for the sake of accuracy in testing, I also prefer not to drive during the Summer. Which unfortunately will ultimately leave big gaps in the timeline.  The last time I had driven this car on track was March of 2021, after the updated Figs arms and new alignment settings.  Up until now, we have been using the same NT01 tires for every previous test (circa August 2020 – yikes); a 275/35/18 mounted on 18×9.5 +43 Advan TC4.  That is, aside from the very first drive I did in it with the Advan Apex tires; a 265/35/18 mounted on the 18×10 +35 ZE40s.

Being that it is a new season, I wanted to try and step up the testing.  The NT01’s we had been using were all but gone.  Continuing to track on them would not be the best barometer of how the car, or my ability to drive it, was progressing.  So we decided to go with a 275/35/18 Nankang CR1, although this time mounted on the wider and lower offset ZE40s.  I have a set of Regamasters in this same spec on order, and intended them to be the race setup, however they still have not arrived. This ended up being an issue… 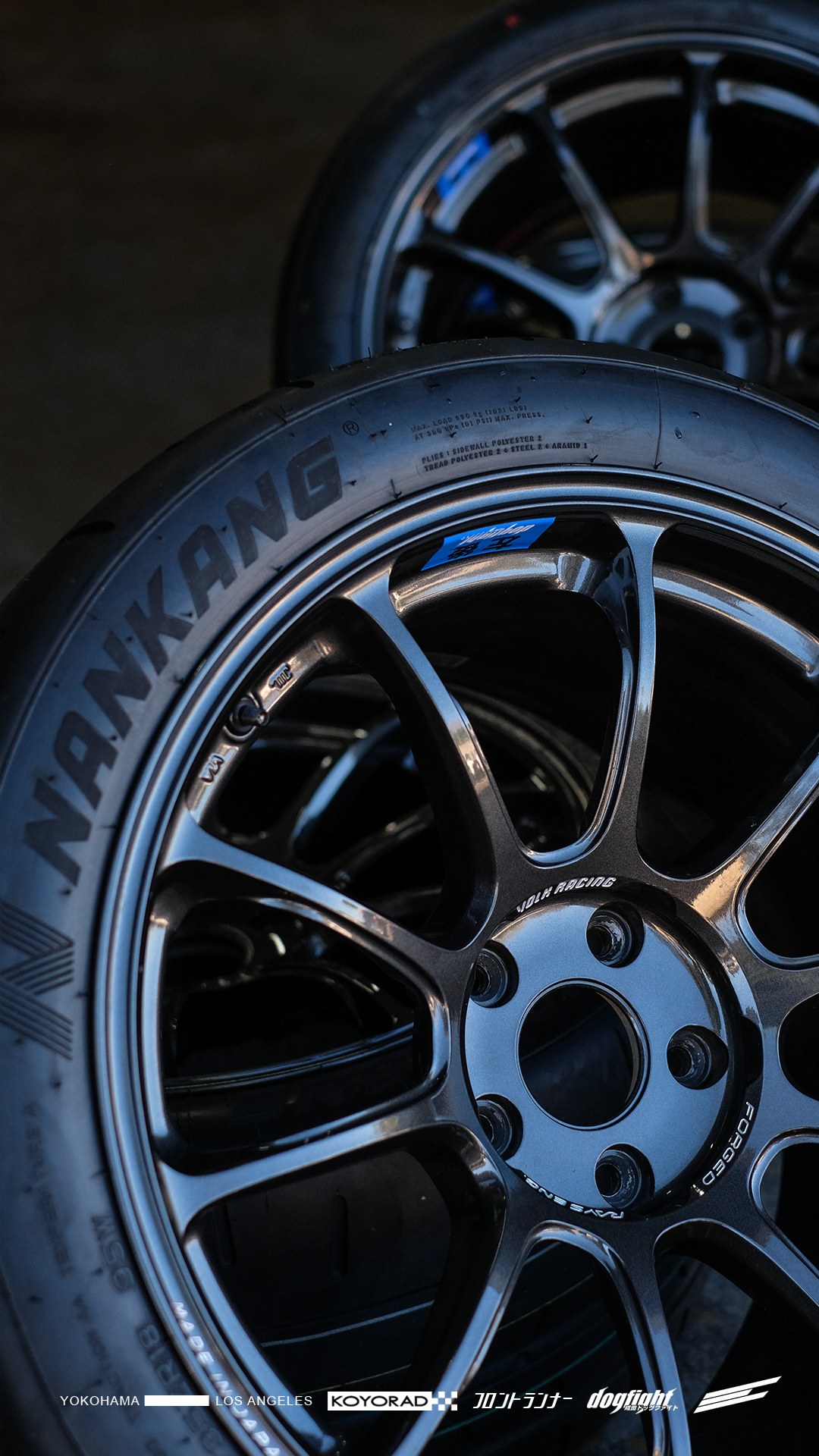 For this event, I also replaced the front brake pads with Project Mu Club Racers, and the rears were left with the RB Racing street pads.  The brakes were bleed again with Endless fluid.

During the later part of last year, I came across a pretty rare exhaust for the ISF that had me contemplating whether or not I wanted to take the leap into modifications that would effect the drivability of the car on the street.  Keeping in mind the point of this documentation is to redline the amount of performance we can get out of this chassis keeping it as a commuter.  The exhaust was the axle back portion of an iCode titanium exhaust.  Headquartered in Aichi, iCode makes exhausts among other parts for higher end cars, namely Porsche.  The quality is as you’d expect from any other high end exhaust manufacturer, and their dyno charts have proven gains, not to mention the titanium is a massive weight savings over the OE unit.  On top of that, all the videos I could find of the exhaust put the note at a very ‘OEM+’ sound.  Almost indistinguishable at idle, mild at highway cruising speeds, and just loud enough to hear on track inside the car to assist in driving.  It ticked all the boxes, so I went ahead and purchased it from the seller. 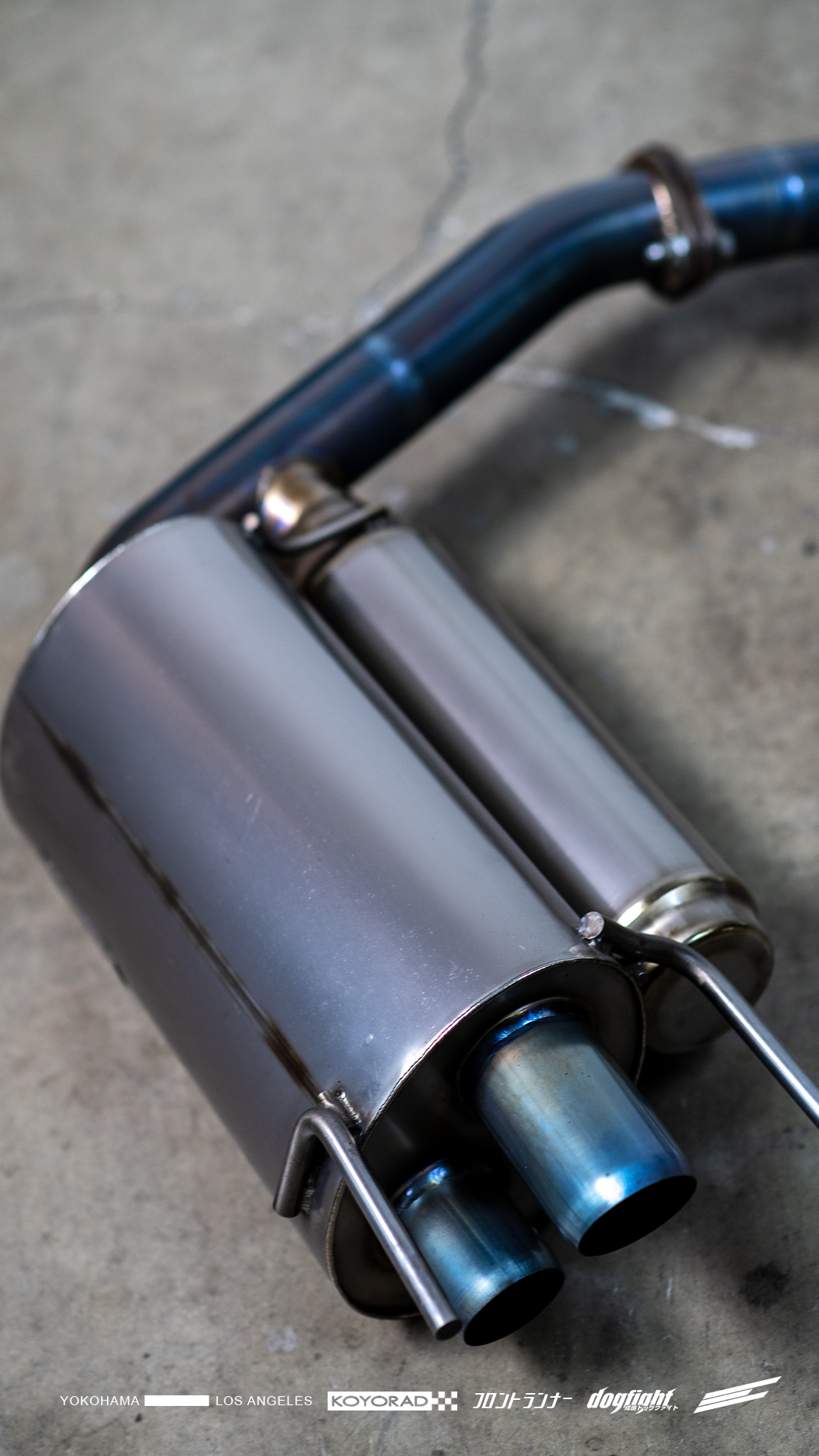 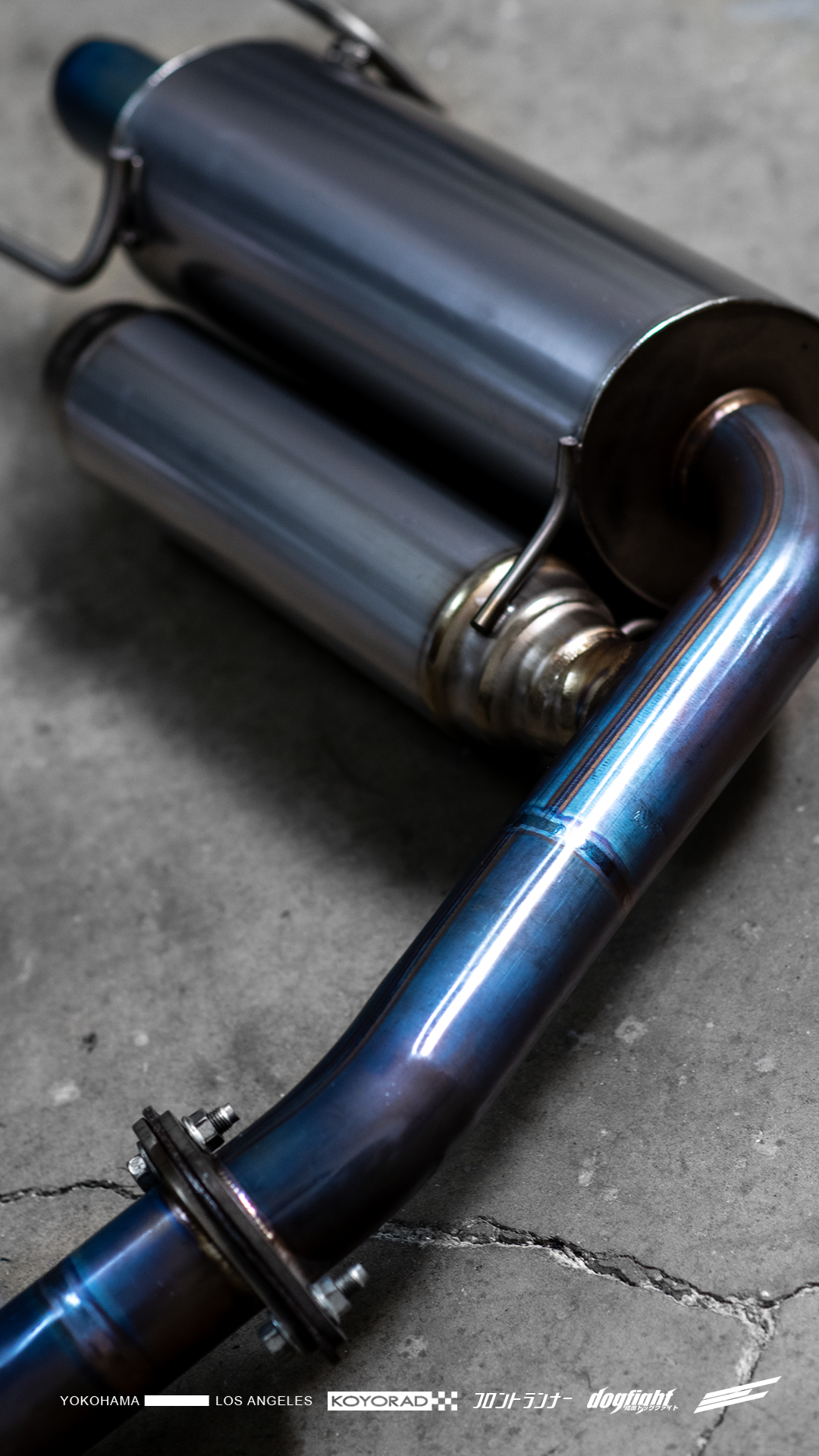 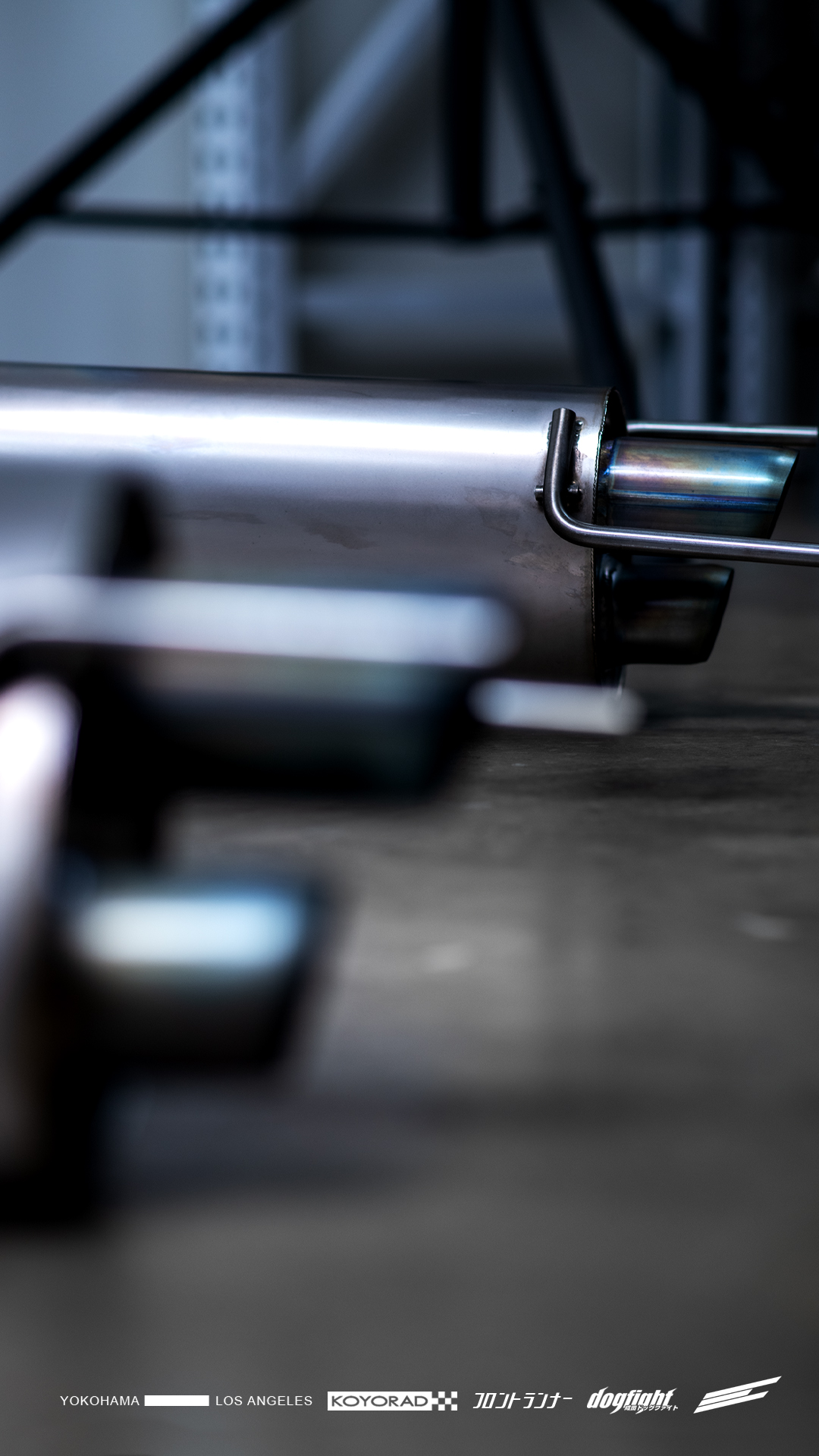 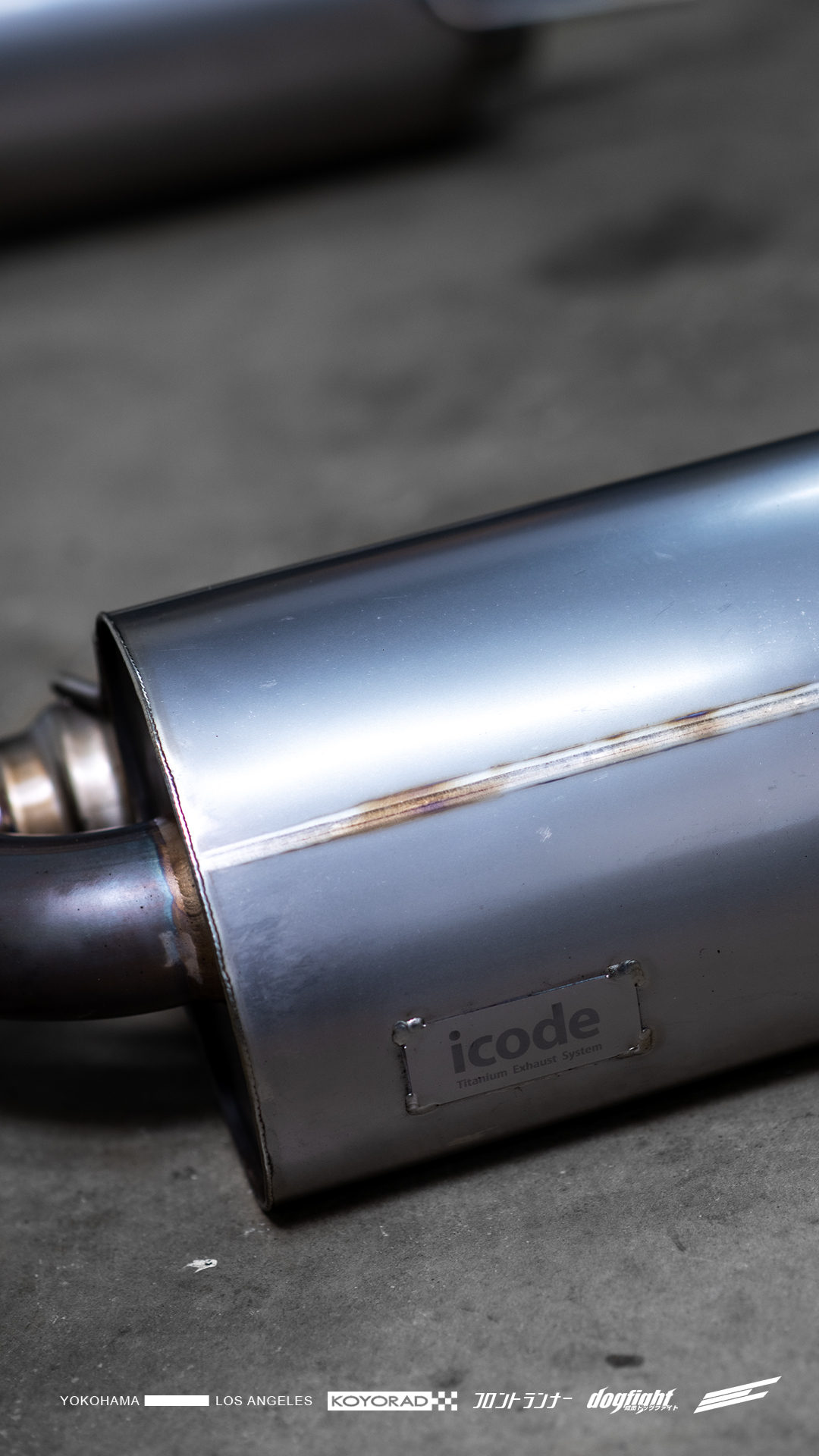 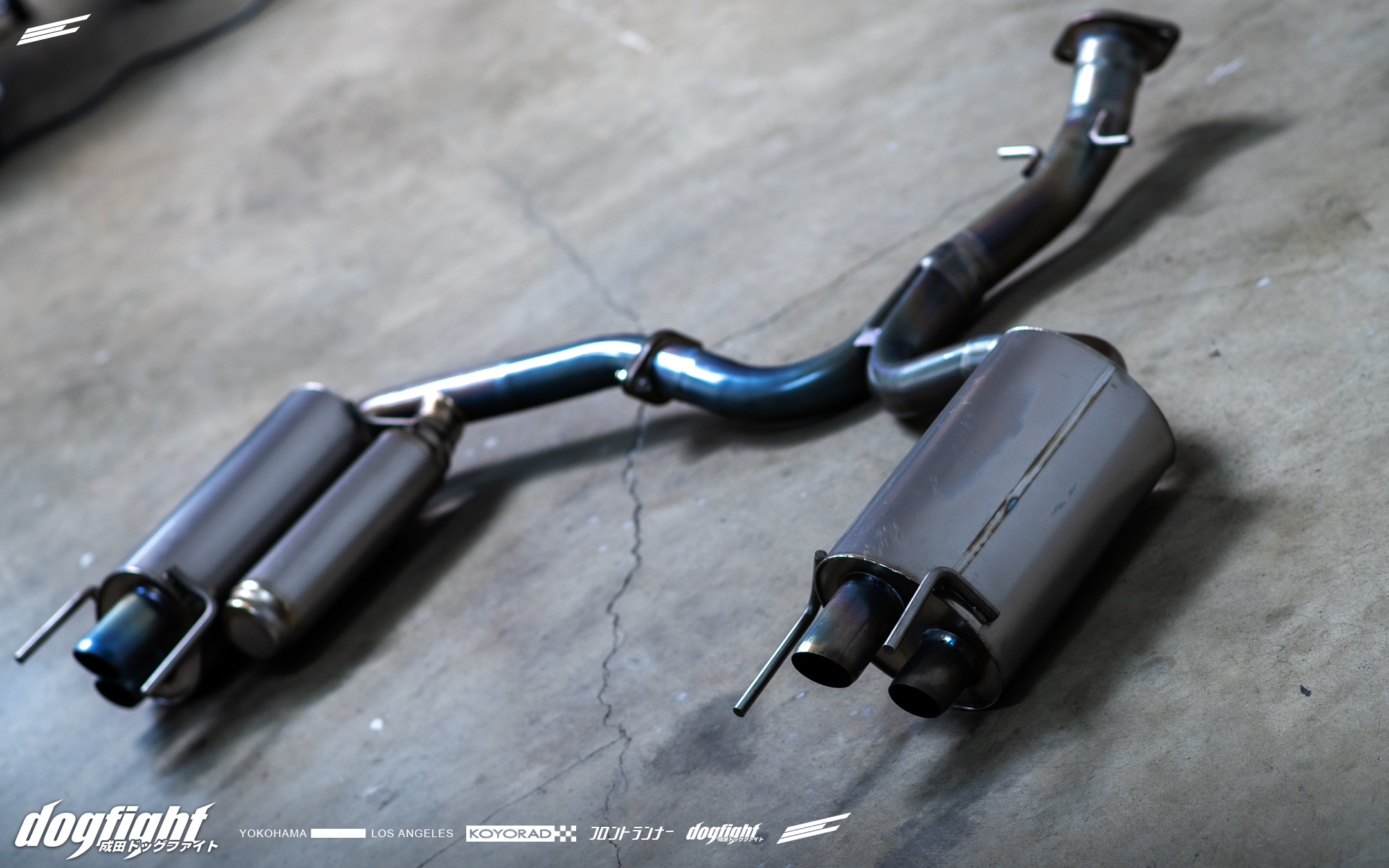 It’s a good looking exhaust that’s not too far off from the OE look, and because the sound is so mild, it fit into exactly what we were looking for in this build.

Here is a quick recap of what’s been done to the car to date.

At the start of this documentation I was expecting that Streets of Willow would be the official testing grounds, but as fate would have it I ended up driving the car much more at Chuckwalla.  So this past weekend getting to take advantage of the Club Racer double header at Streets was pretty cool – even though, as you’ll read, I was only able to get a few laps in. 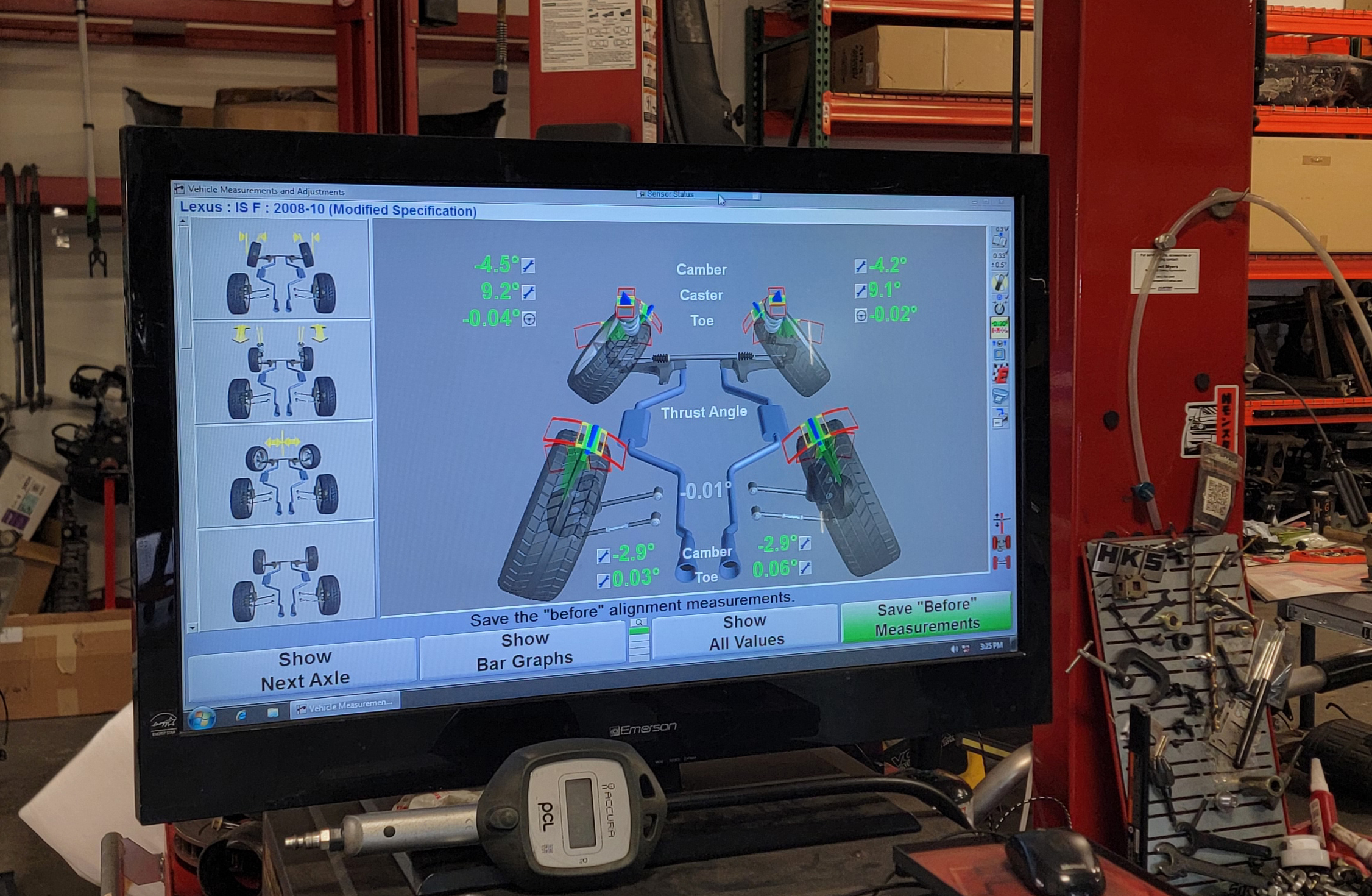 After getting the exhaust and CR1s on, I drove over to Son’s shop to get the car aligned.  Right from the onset I could hear the rears we’re rubbing pretty bad on the fender.  Son’s shop is close to ours, however, and I figured we would be able to sort it out on the rack.  Unfortunately, the rear camber was already at a degree I didn’t want to surpass.  So, I ended up leaving it at just about -3, not wanting to upset the balance of the car I’ve grown to enjoy.  The rear was rubbing, but I thought that it was just enough that it would fix itself on the drive to WSIR that night. 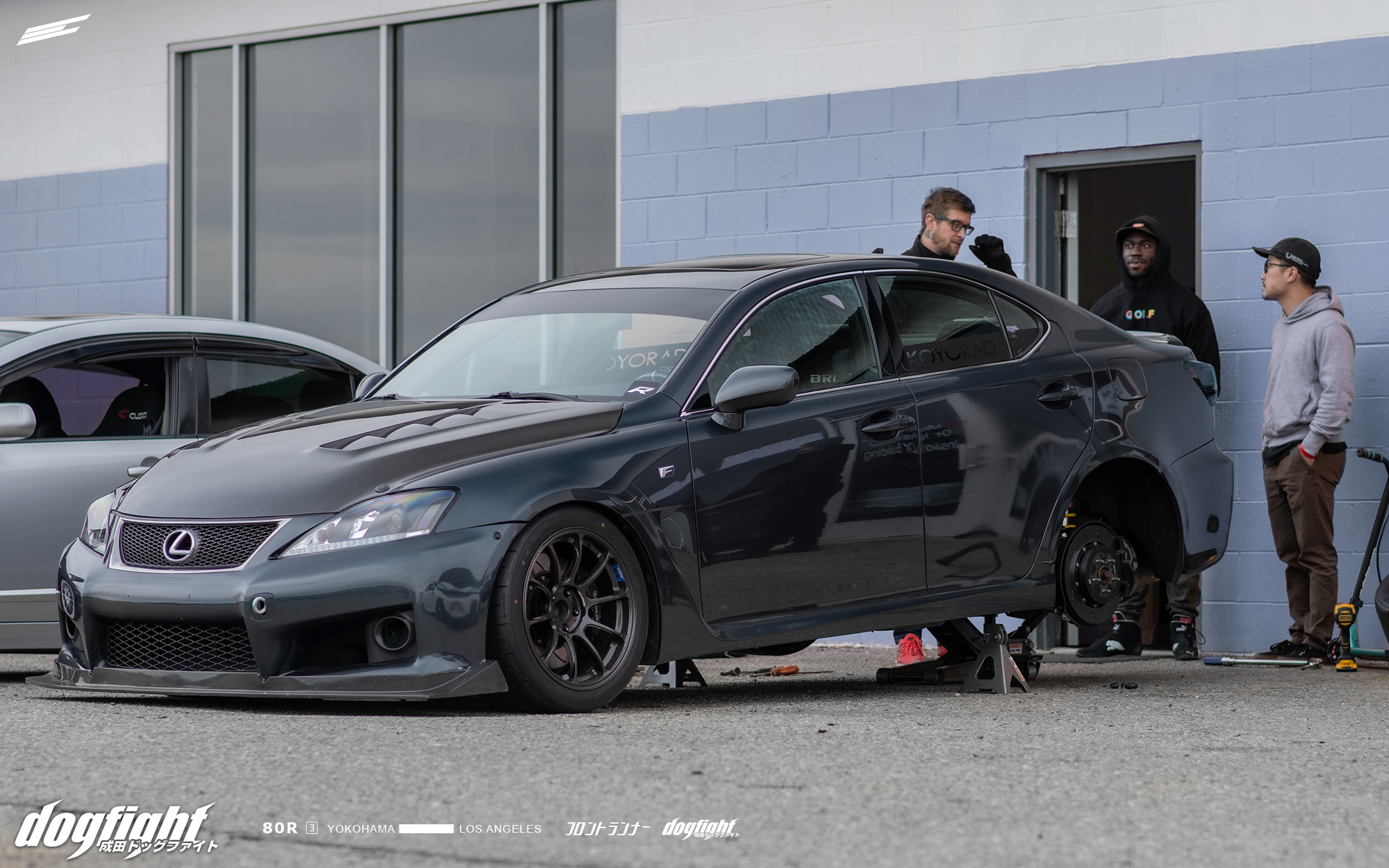 Well, I was wrong.  It turns out it wasn’t actually rubbing on the fender, but the rear bumper tab was cutting into the sidewall.  I ended up with some discernably worrisome cuts into the tire – so much so that I would not risk tracking on it as is.  So I did what we all hate to do, tried to fix it at the track.  Shaved down the tab, carefully hammered out the rear part of the fender to get what I could out of it, and yes, unfortunately had to raise the rear of the car. 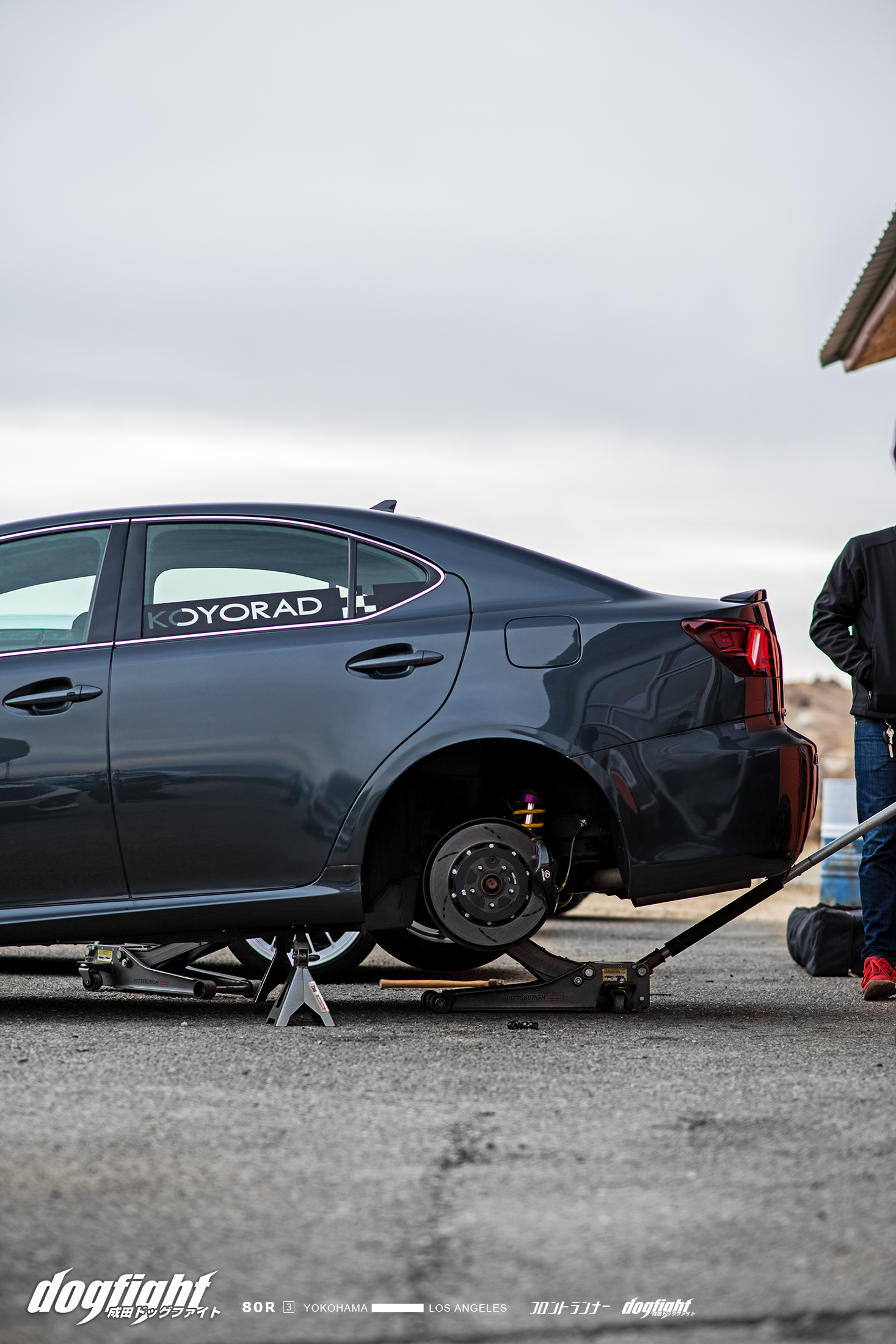 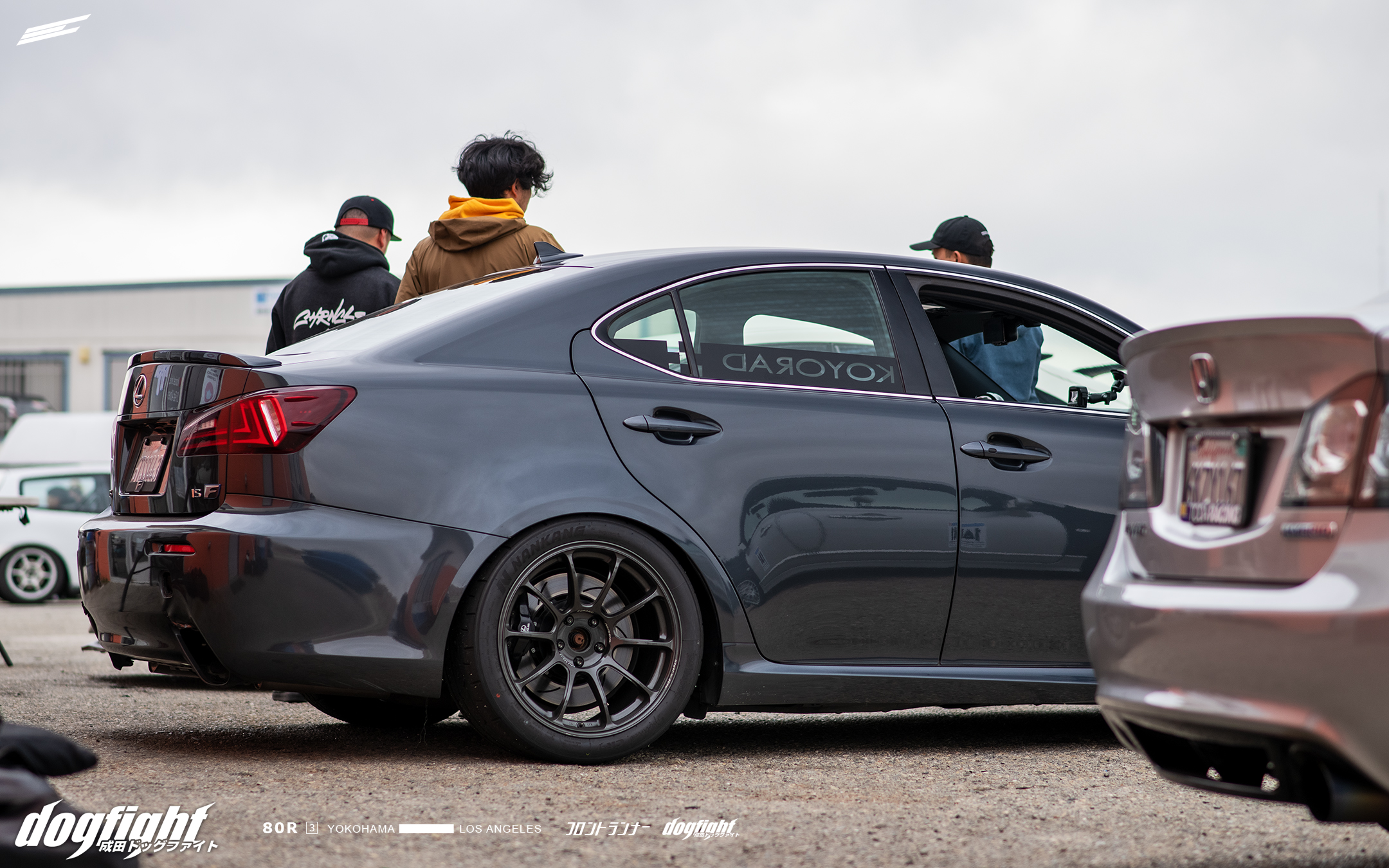 It worked enough to be able to get a few laps in.  It was still rubbing, but no longer cutting into the tire.  The downside was the car now had a considerable amount of rake, and the front tires would ride against the top of the wheel well under heavy corning – namely turn 2, the bowl and the skid pad.  At any rate, I got it to a point where I could at least drive the car. 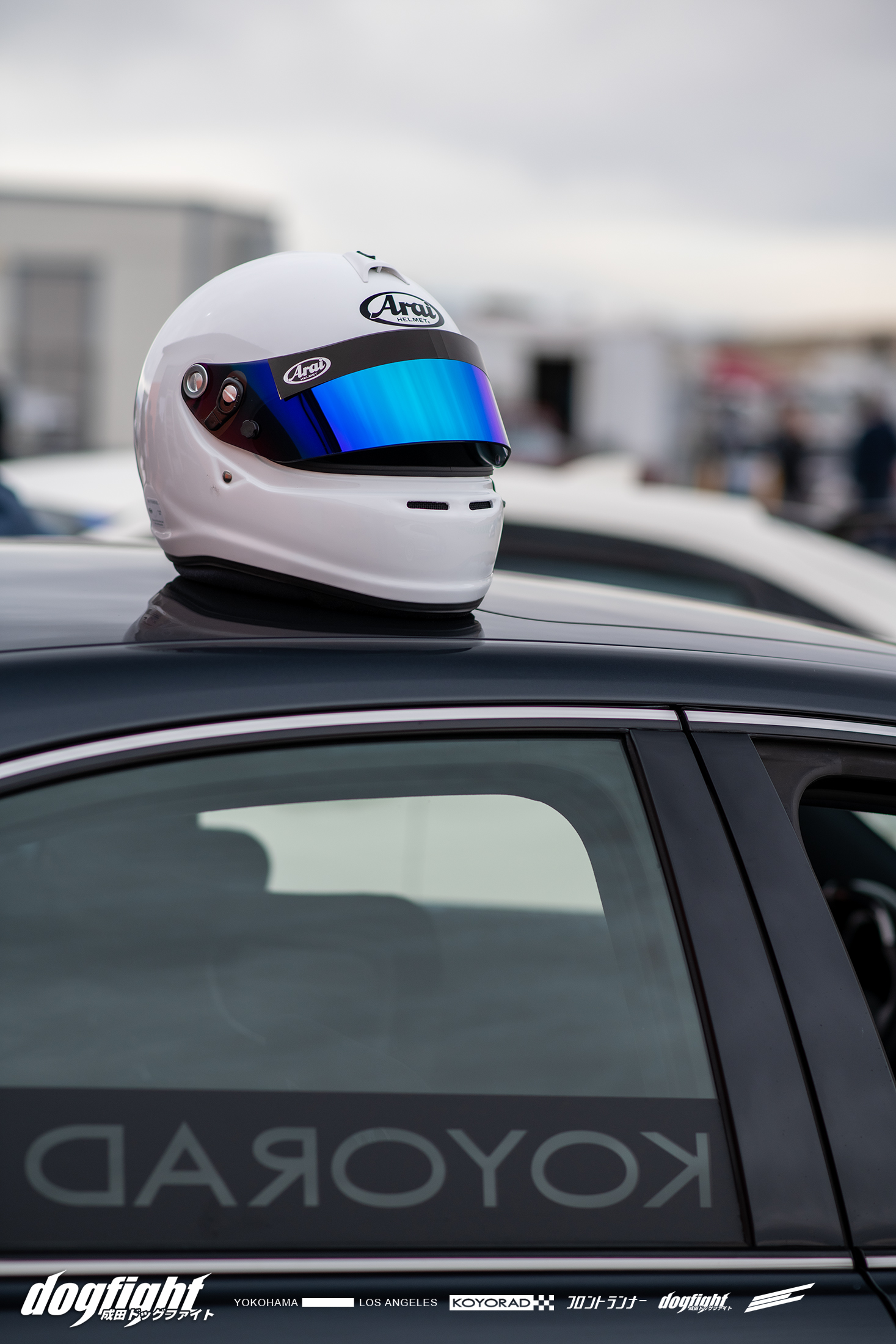 Got a new helmet at the end of last year – have yet to give it the dress up. 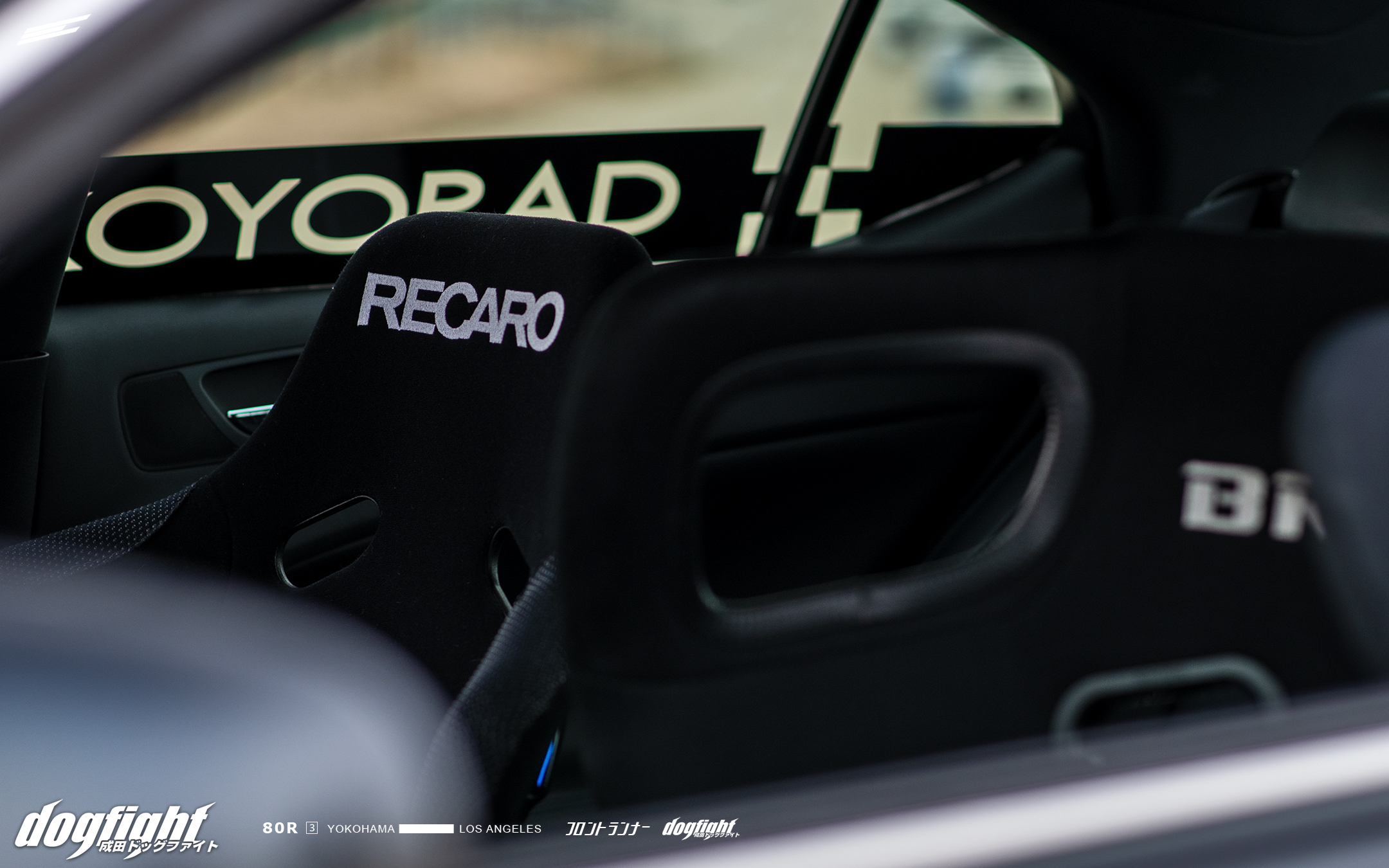 I also installed a passenger seat; a Recaro SPG.  Replacing the OEM passenger seat saved quite a bit of weight while still retaining the ability to seat as many people as Lexus intended.  Remember the car still has full interior, and we have yet to intentionally remove anything to save weight.  My brother drove down to attend the event, so I’m glad I had put the Recaro in to be able to give him a ride along.

I wasn’t sure how the condition of the tires would hold up with the cutting and rubbing, so I decided to head out in a session for a couple of easy laps.  I did a quick warm up, and a couple very easy 1’27’s, and decided that it would be alright to push it a little harder.  So I came back in, and in the next advance session out I took my brother for a ride along and a hot lap.

I’d say that I was still driving on the conservative side, partially because I had a passenger, and partially because I was still apprehensive about the rear of the car, and also now with the front rubbing.  This is all to say there is probably a high 23 in the car as is, just need to fix the ride height, alignment and rubbing issues.  I discovered later in the day, when I took it out for a few more easy test laps, that the new CR1’s could handle turn 1 in 5th gear, albeit a little frightening for me.  Through Omega and the S’s I was able to feather the throttle a little bit heavier than before on the NT-01, although the car still felt really heavy through the S’s.  I was more confident in powering out of the bowl and staying flat through the first crest of the Chicane.  Since the repave there is a lot more room for error there, but still found myself coming in too hot into that left hander after.  That’s always been a tough spot for me in this car. 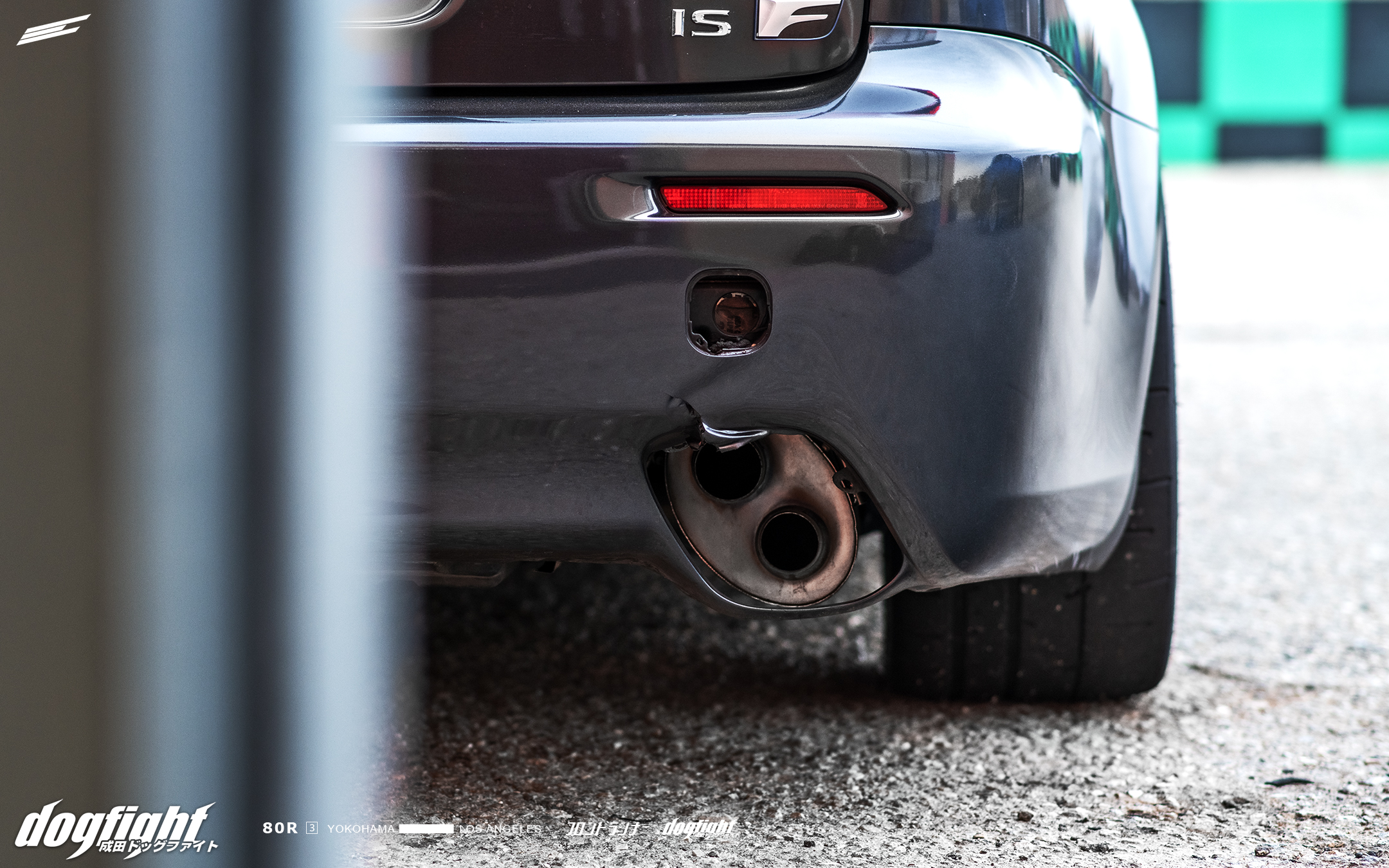 I did one quick out lap, a warm up lap, a hot lap, and a cool down lap the session with my brother as passenger.  When we pulled in and got out of the car, I smelled burning plastic and realized that the exhaust, which now sits behind the bumper, was melting the back of the bumper.  I made the decision to leave the OEM tips off because I never really liked the oval look, but didn’t realize what the result would be in heavy driving.

Will be looking into buying some titanium for Kristian to extend the tips past the bumper. 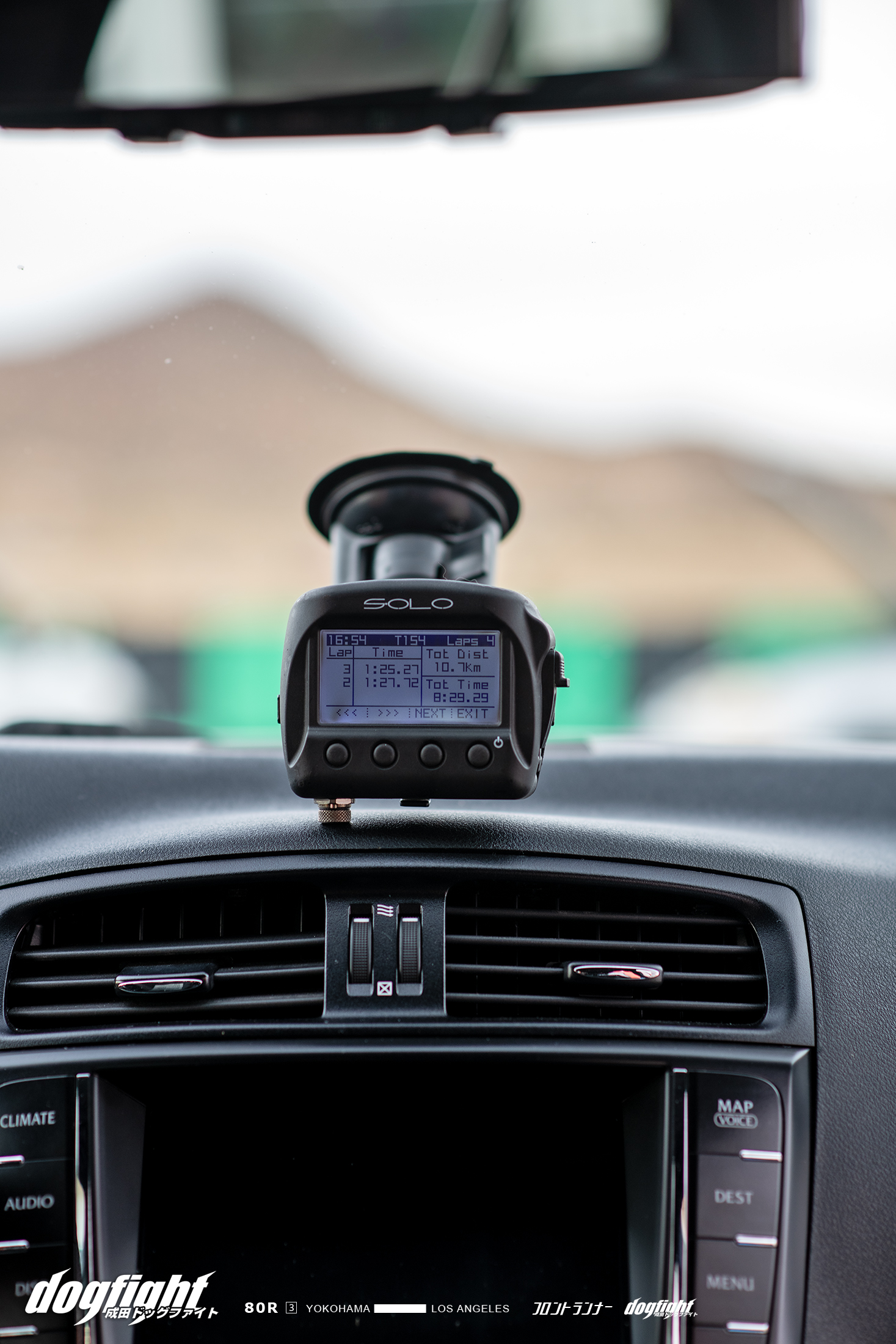 The result of the one hot lap was a 1’25.27.  Given the repave and new tires, I halfway expected to be in the 24s, but understandably had to deal with other issues that had an effect on how hard I pushed it.

Overall I’m pretty excited that I’m now just 3 tenths off my Civic time in a luxury sedan that’s basically still stock.  I don’t have video because I didn’t have enough of the correct GoPro attachments to mount the camera to my new helmet, but has subsequently ordered them and will have video next event.  A little bummed because I wanted to see if the exhaust note came through on an in-car video. 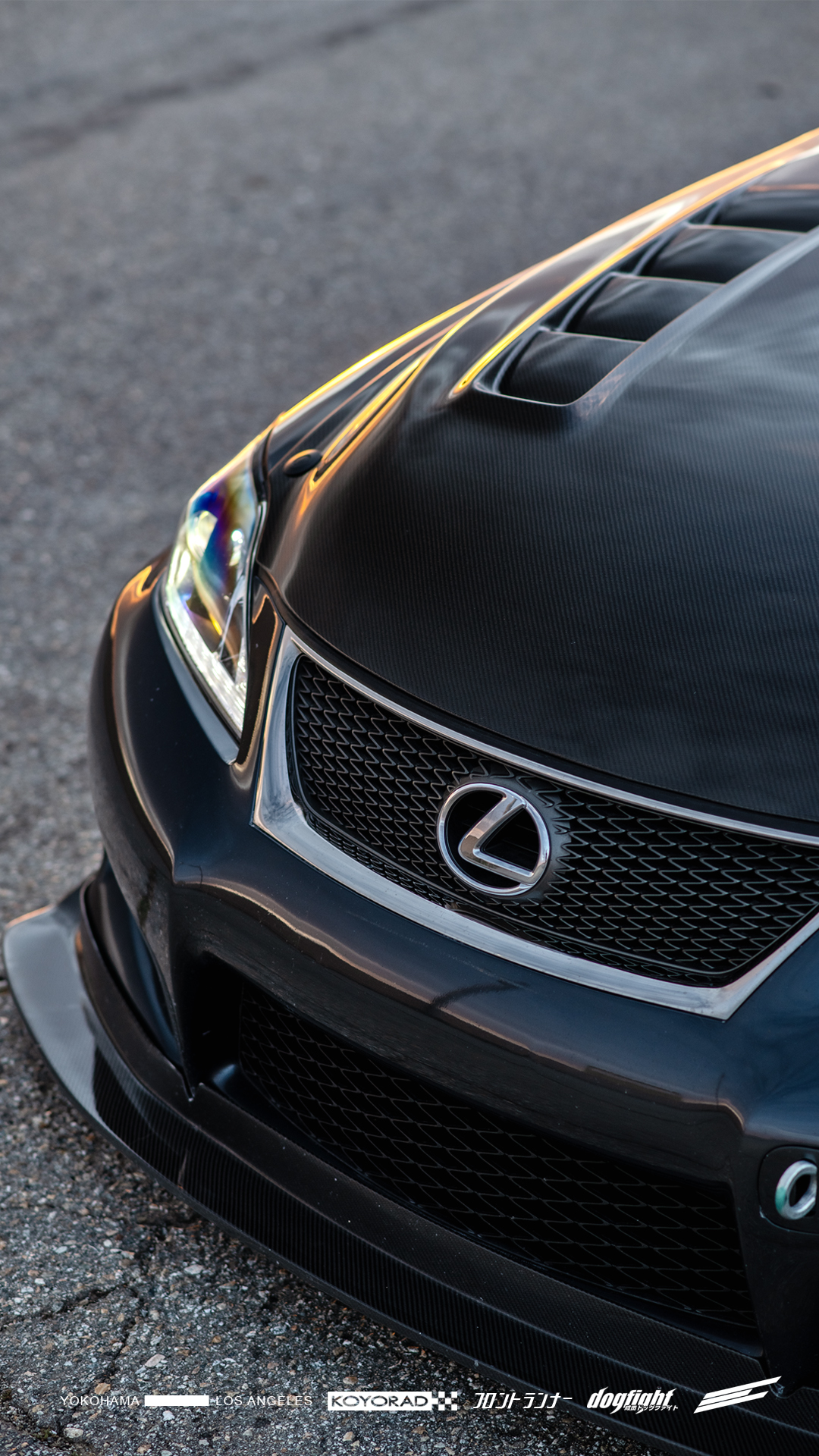 Koyorad kept the temps in check all weekend – although the weather was absolutely perfect on Saturday.  I hope to get another day like this with the car in proper condition. 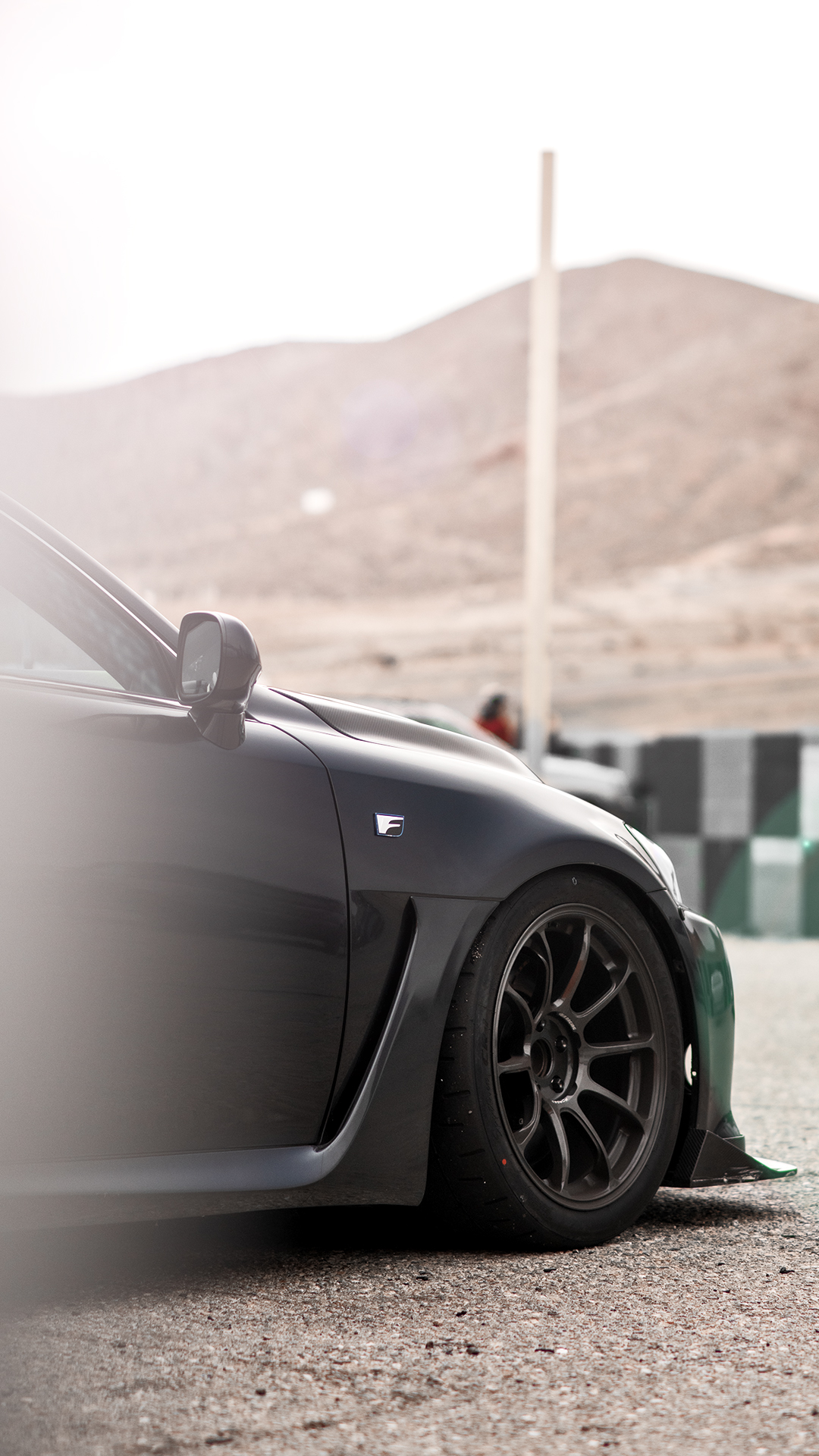 That’s pretty much it for the update.  I know it’s not much, but we got an updated time at one of our test tracks, and we got to see some progress on the build itself. 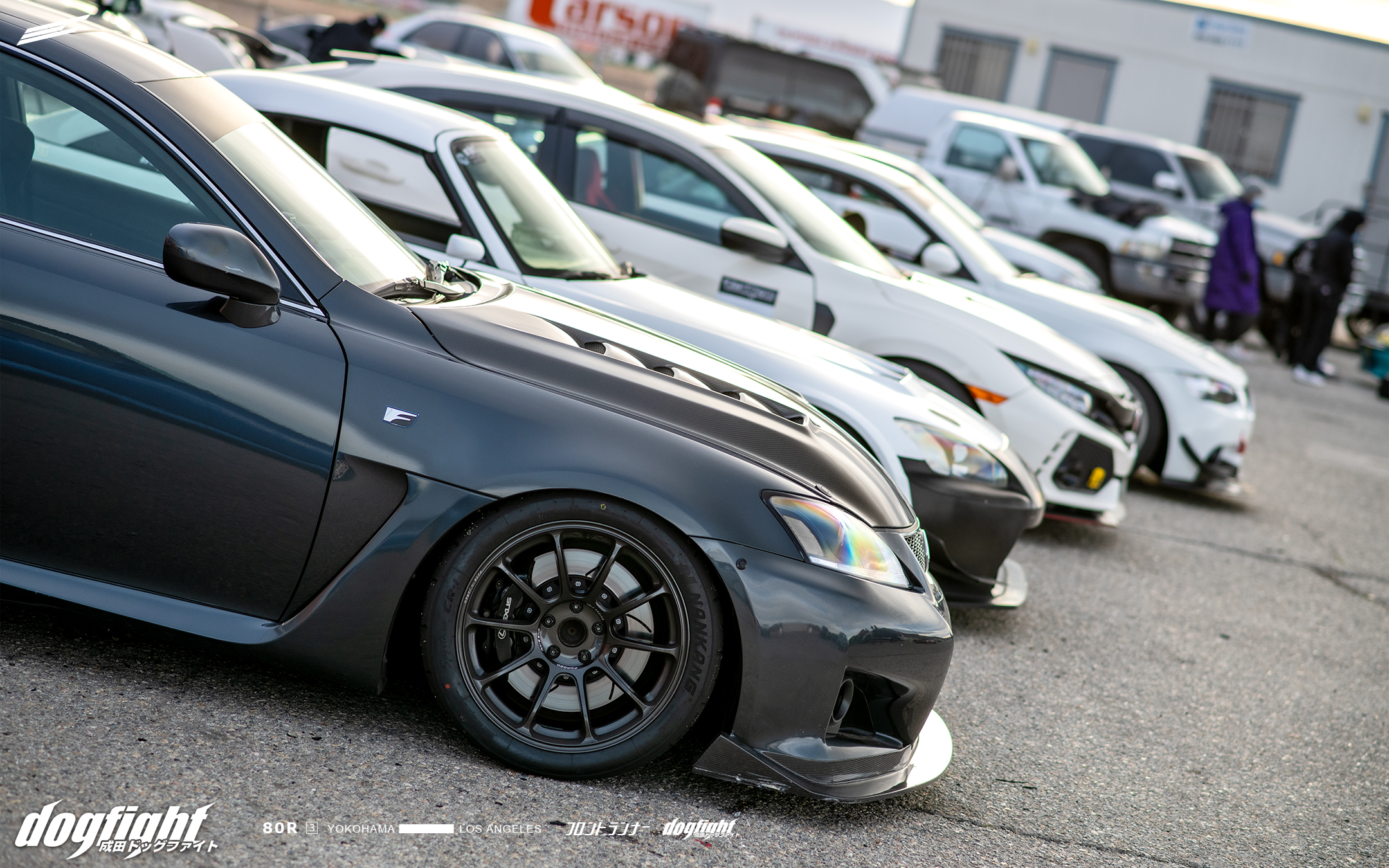 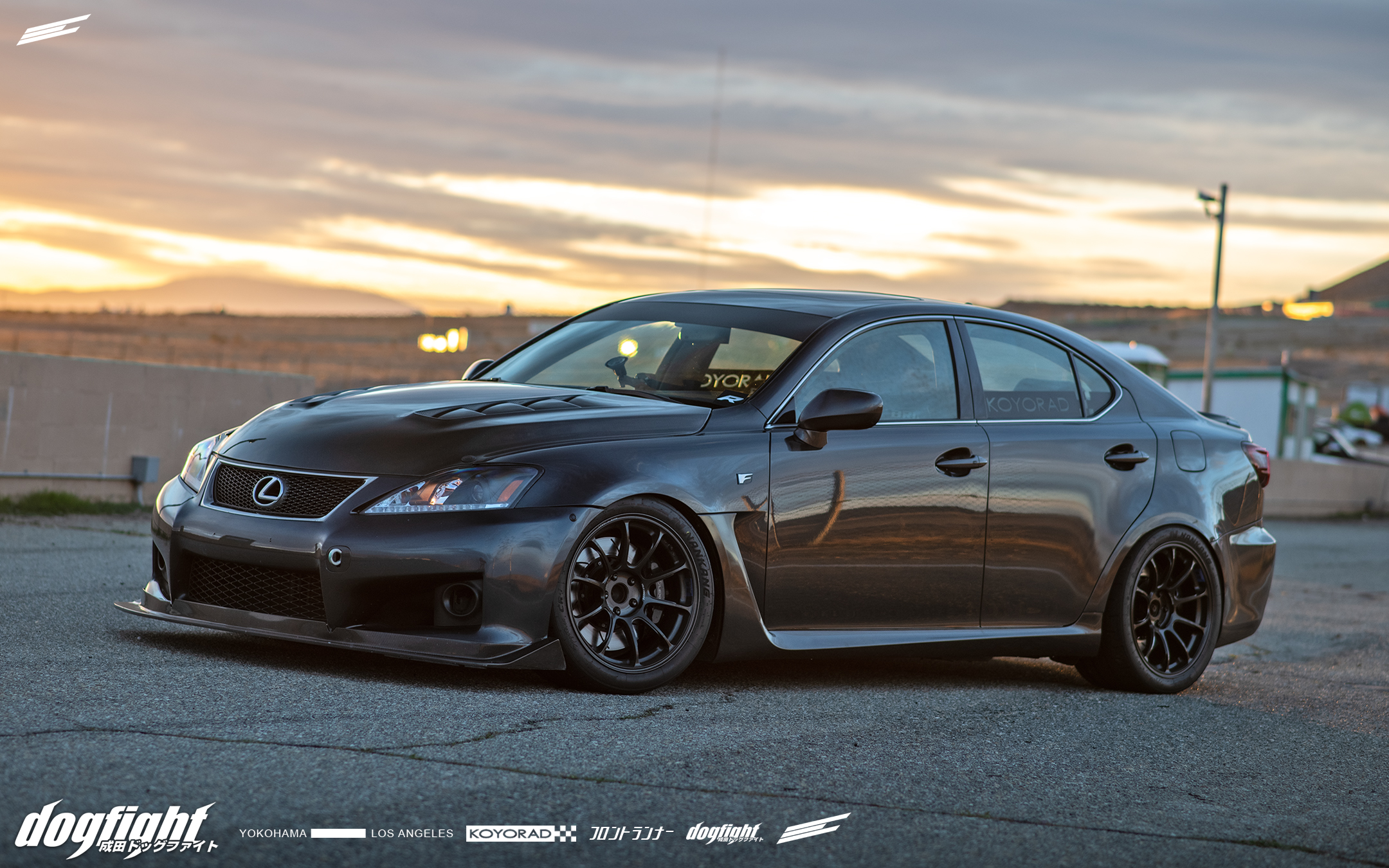 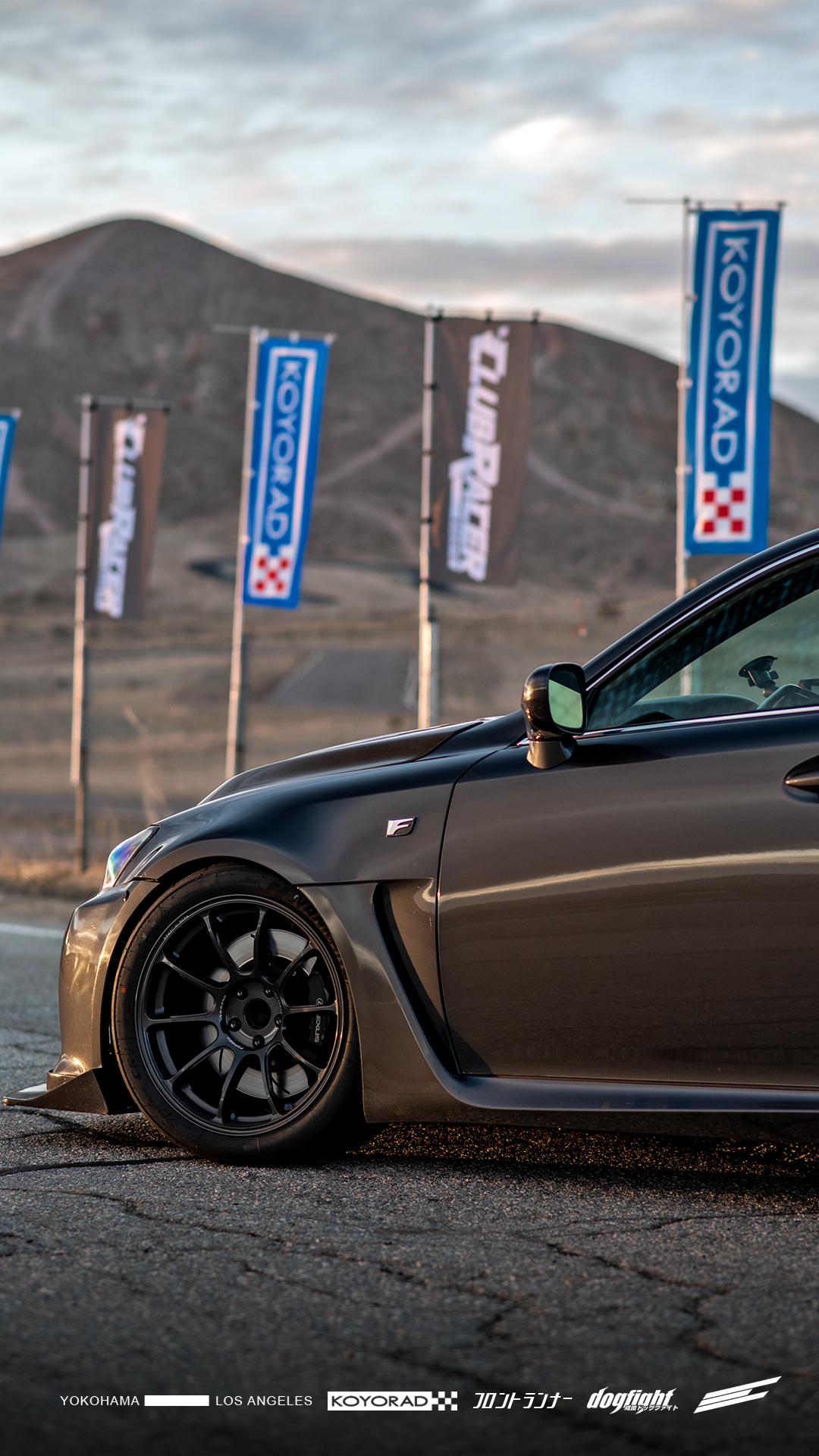 If you made it this far, thanks for reading!  See you soon for update V.6