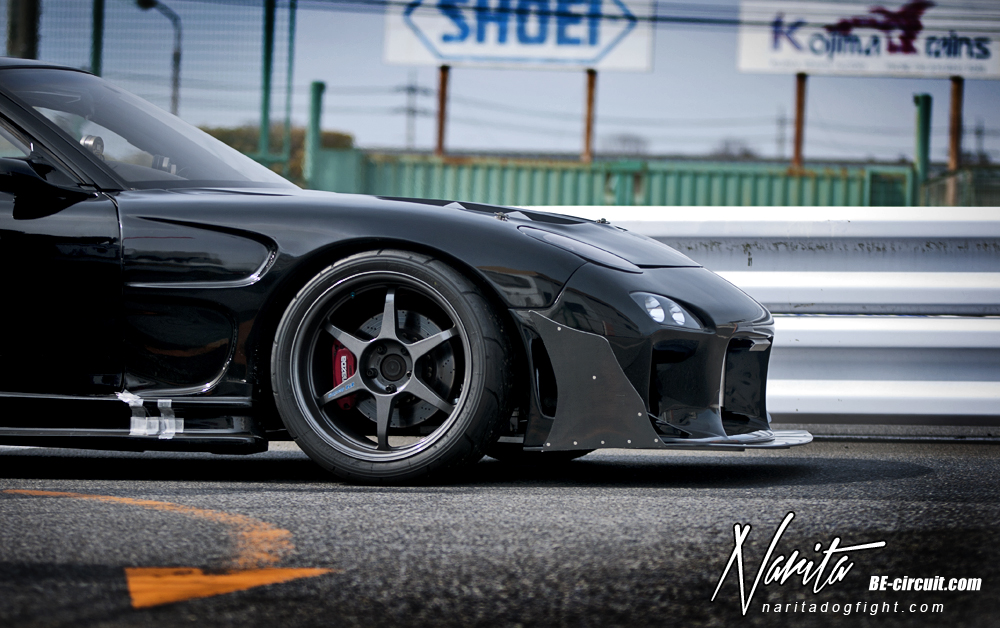 We pick up on circuit late morning in Tsukuba, where, lap by lap, the times are decreasing ever so slightly.  By this time, many of the drivers have recorded personal bests or were well on their way.  Here you see a group of FD’s making their way onto track, followed by something a bit more unusual… …I’ve heard of this mysterious GA1, but this is the first time getting to see it in action.  Cute to say the least, but do not be fooled by it’s stature.  This Honda’s little 1500cc, turbocharged engine propels it around Tsukuba in a staggering 1’01.079! I knew right away who the owner of these tires were…the only car that runs in Evome on 15’s. I was pretty impressed!  We’ll take a closer look at this car a little later… Back on track though the clock was ticking.  The Unlimited EVO6 had a best lap of 56.541; good enough for the fourth fastest time of the day. While it certainly looked fast on circuit, Takanori’s R32 stopped the clock at a best of 1’01.967, well of his fastest mark. Resting back in the paddock. One of Garage Kagotani’s creations, their CT9A, managed to clock a 1’01.286 before getting a little too out of shape coming out of turn 1…

…where it gracefully snap oversteered into the tire wall, making it the second victim of the morning. Although everyone is fully prepared for this to happen eventually, it’s still a bummer to see a team have to quit early.  I suppose the silver lining is that the driver did manage to get his pb at Tsukuba. KT choppin’ it up with R-Magic… RE tuned DeepGrip RX7 rocking the Work/Enkei combo.  Nakajima almost managed to break into the one minute range with a best of 1’01.093 for the day. If you’re coming from Kyushu, all the way to Tsukuba, you had better believe you’re going to spend as much time on track as possible; that’s just what Hannita-san did in his NSX.  Going out in every session, he managed a 56.402, which I believe is a personal best.  Which also gave him the third fastest time of the day. Tatsukiro FD wins the NDF award for best mismatch wheel combo.  A 59.365 was the quickest it could clock in, but it sure looked good doing it. With TE’s in the rear… …and Buddy Club QF’s in the front.  I had no idea QF’s looked so good on FD’s…unreal. Off track, and done for the day, the T-One’s/Moty FD get’s a little rinse before taking off.  Taking the sixth best time of the day at 56.955; fast, but not it’s fastest. Nismo RPS13 chasing the seconds.  Koji-san has a personal best of 58.433 at Tsukuba, but was only able to manage a 1’00.08 lap time.  Which, all things considered, is not bad – especially knowing that he drives this to the track from Tokyo. Stick around because there’s plenty more Battle Evome to share.  Next up, we’ll take a closer look at some of the individual builds.  Thanks for visiting!