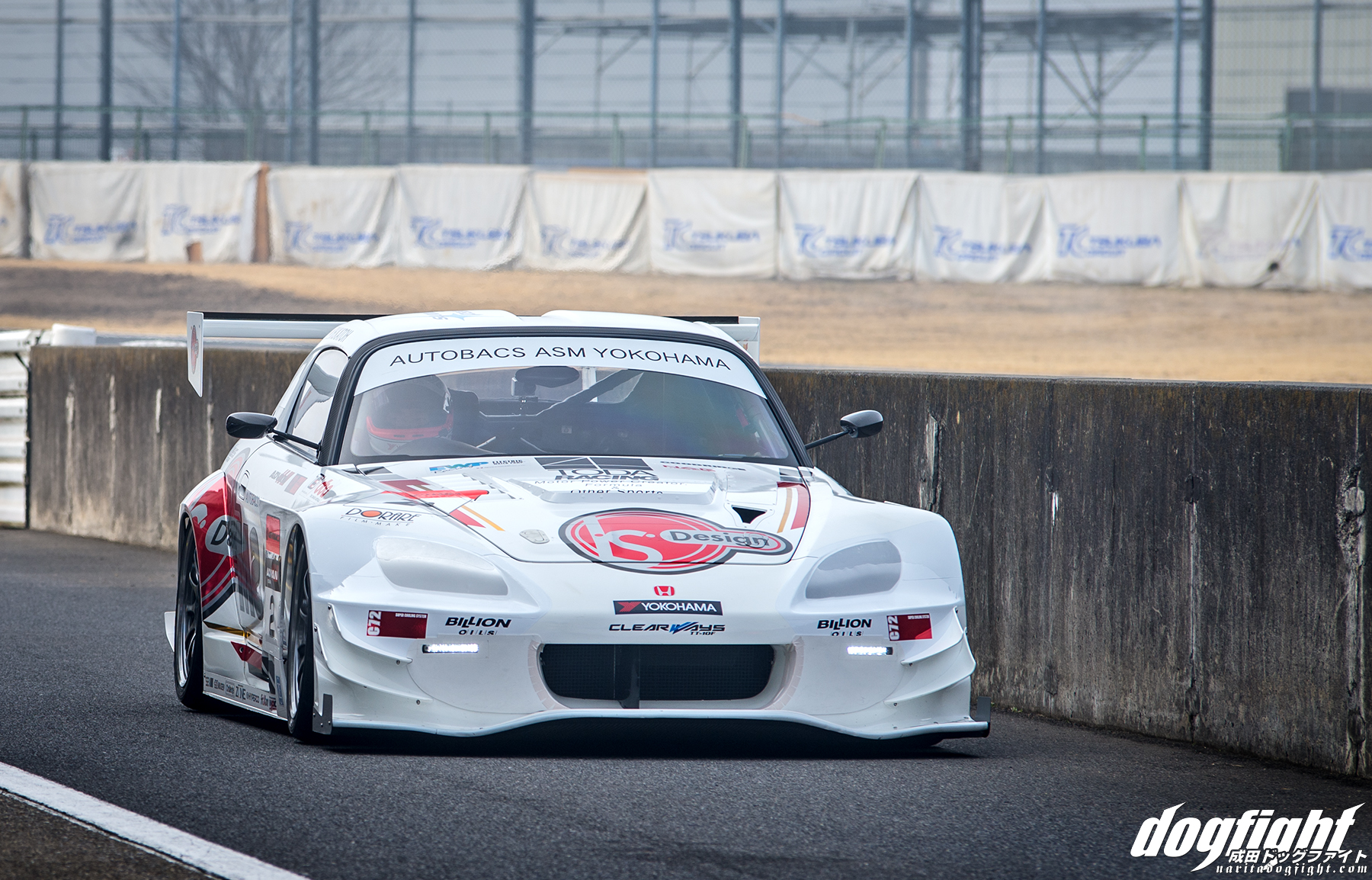 For some time now, the car has been driven very sparingly; making appearances at only a few select annual events (i.e. Revspeed Super Battle, Speed and Sound).  The shop decided this year, however, that after years of the car being in an almost dormant state, they were set to make a resurgence. Firstly, to attempt to retain their title as the fastest NA S2000 at Tsukuba Circuit, and secondly, to later go on and achieve the rank of fastest NA.  The car was showing it’s age, though,

The goal ASM had set for the car’s comeback was to surpass a target time of 57.398 seconds; the time that their No.2 car broke at the Tsukuba Super Battle NA Tuning Car Record back in the day (2006 if I recall correctly).  A long time ago; I know.  However, keep in mind that their No. 2 car was the old GT-06 and at the time, that was the Tsukuba NA course record.  Of course, that has since been reset by Full Stage and their 20B RX-7.  Nevertheless, ASM was set on besting their time and gunning for a new course record.  The event they would attempt it at would be the Tsukuba Attack Championship this past February. 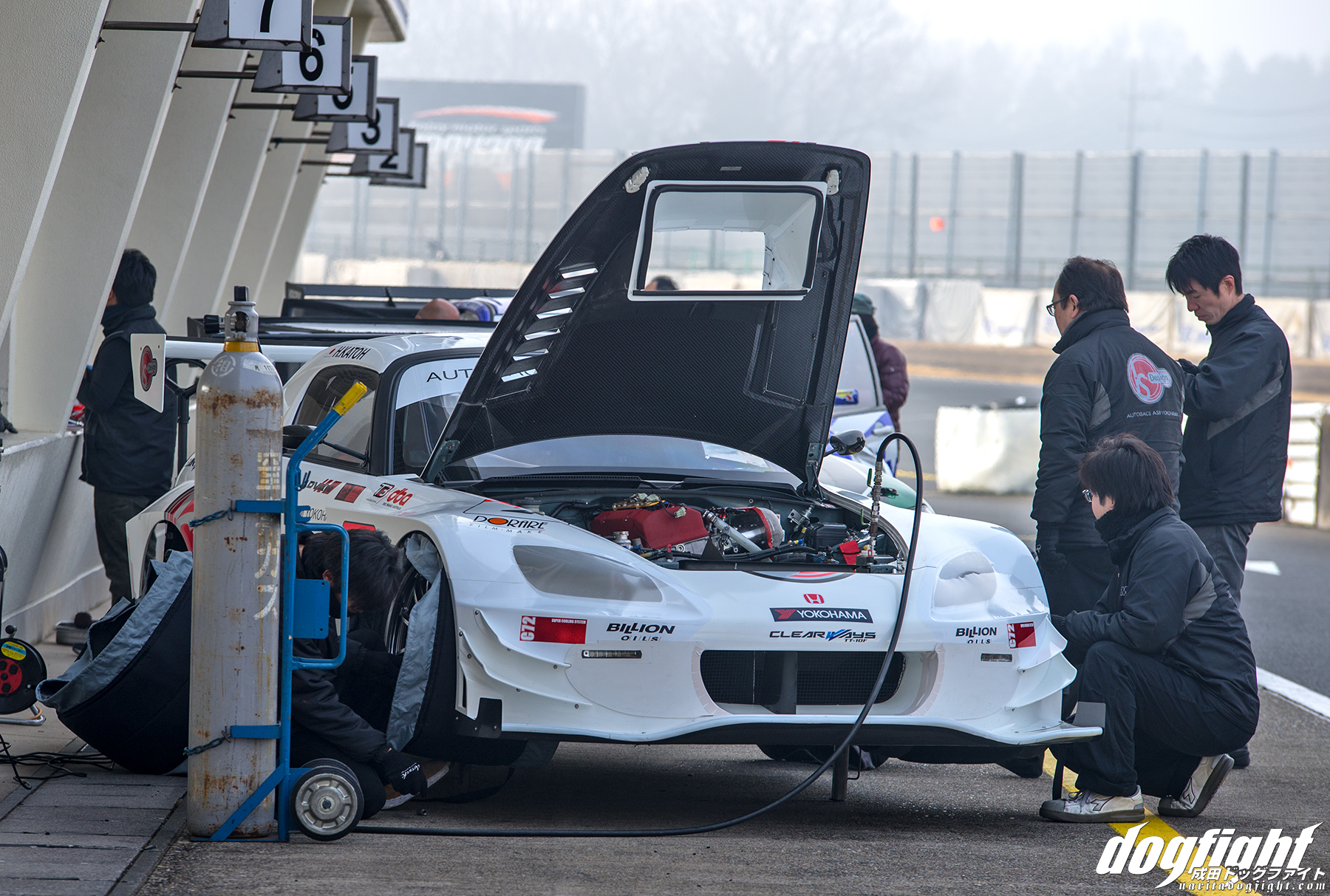 The S2000, although maintained in a pristine fashion, needed to be brought up to spec in order to be competitive.  At the end of last year, the car ran a 58.308 at the Revspeed event (set on Potenza RE-71R) – quick, but a full second off pace of their new goal.  So the team looked to a few specific areas that could be tweaked; namely aerodynamics, and weight. 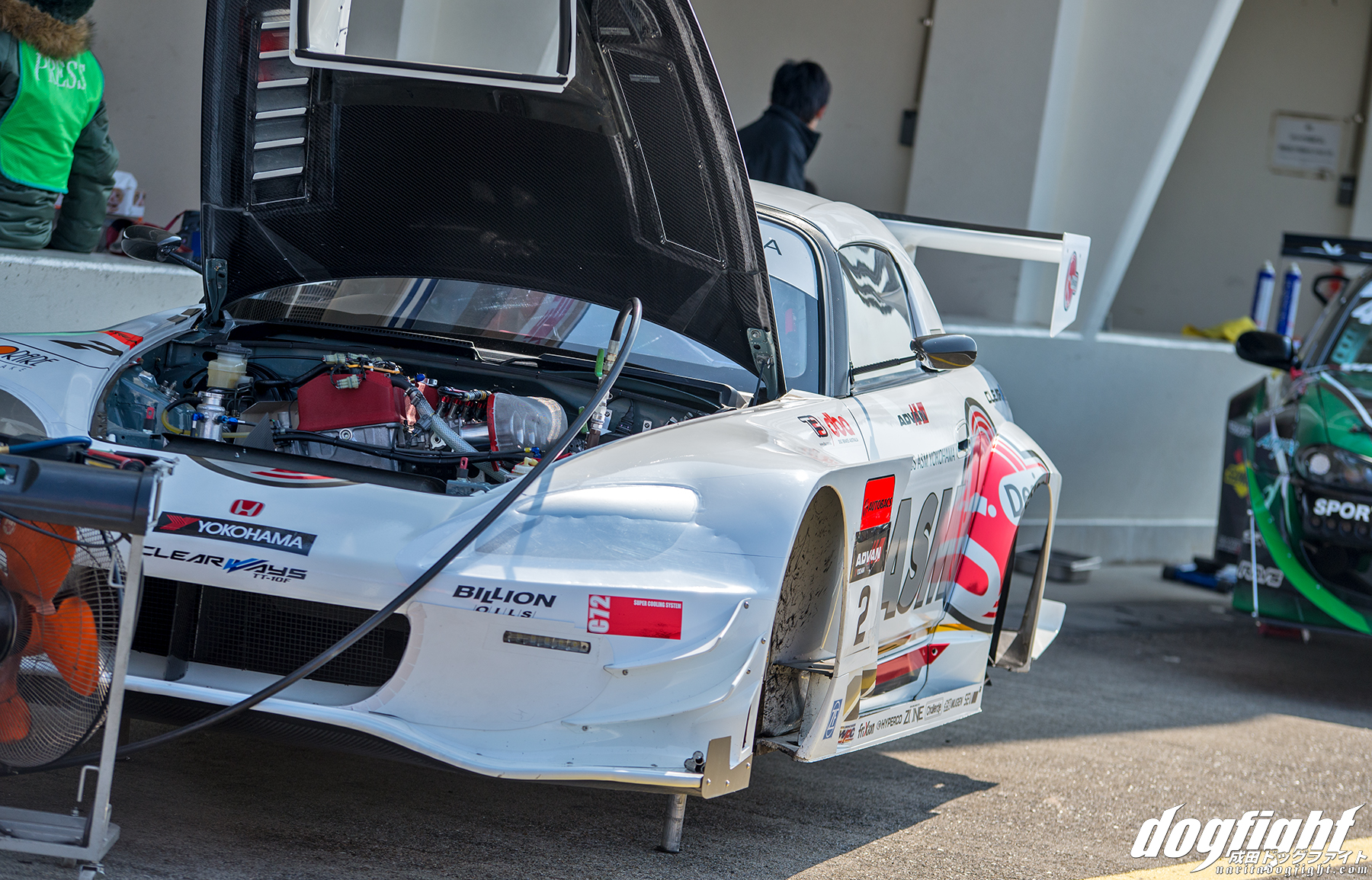 With a car that’s already fairly established such as this one (and well at that), it’s not an option to rebuild.  So instead they improved on what they had.  By looking into what Sakagami-san, ASM’s chief engineer, refers to as ‘wet sizing’, they were able to reduce the S2000’s weight fairly dramatically.  This is something I did myself when I rebuilt my Civic last year.  By reducing the radiator size, the oil cooler size, and swapping to an electronic water pump, you can achieve similar performance by reducing the amount of fluids in the car, which, you guessed it, weigh quite a bit.  On top of that, they reduced the weight of the transmission bell housing, and replaced many other chassis parts with lightweight alternatives they produced in-house.  For example, Nova Engineering in the UK, produced a custom carbon fiber propeller shafter for the shop that weighs in at just over 10 pounds, which in and of itself is about 7 pounds lighter than the OEM one.  Yes, it was very expensive, but budget aside, it’s moves like this that let you net the fastest times.

They even went so far as measuring parts like the tow hooks they use to find the lightest option.  As a result of their efforts, the car now tips the scales at 1,029kg – about 2,268 pounds. 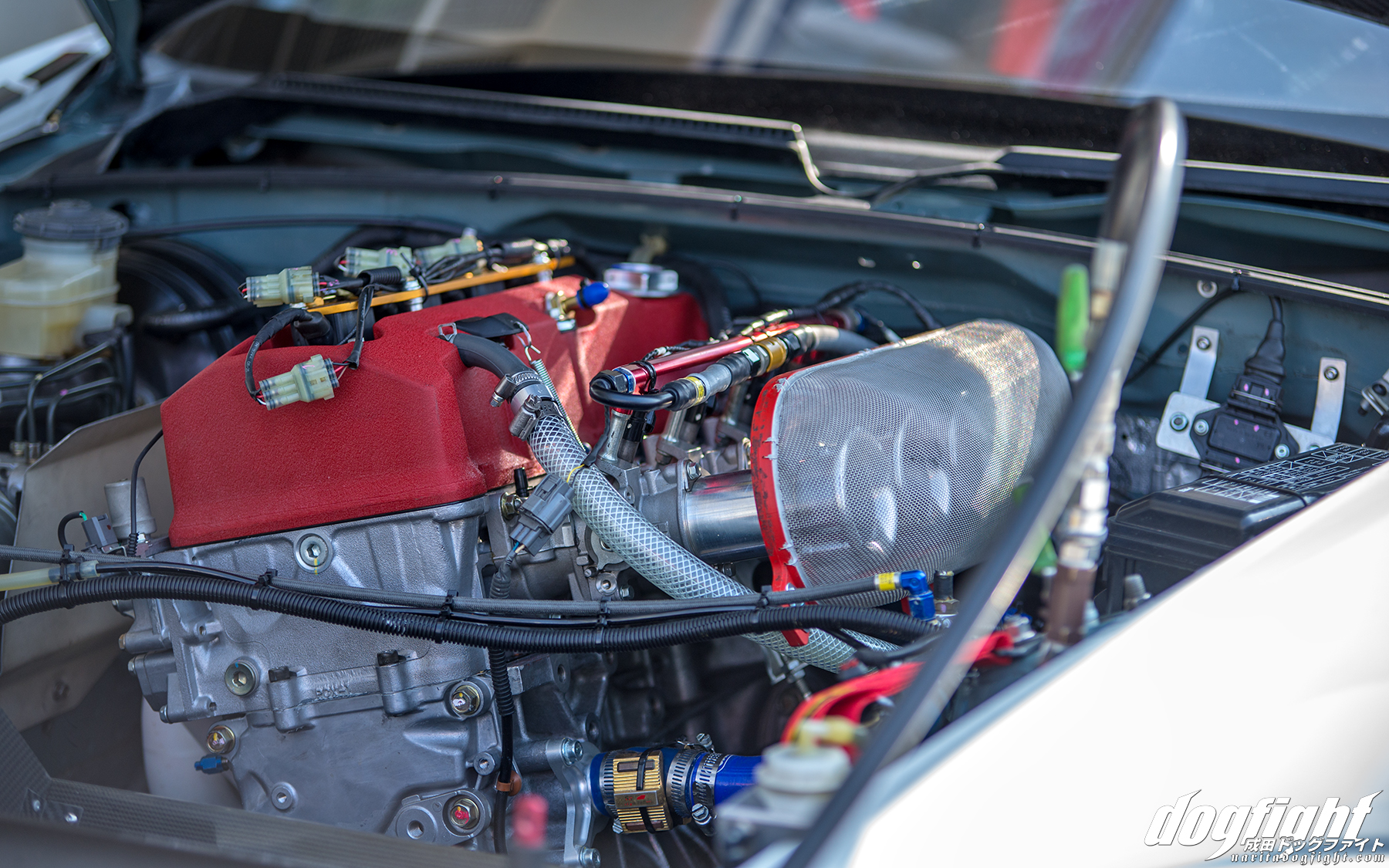 ASM has always been true to the manufacturer, and you won’t see swaps in any of their demo or customer cars.  A lot of people were asking if this car had been swapped for a K-series, and that answer is no, and most likely will always be no.  This car will campaign in the coming years with the F series engine.  This current unit produces about 330 horsepower utilizing a catalogue of TODA Racing parts and WPC coated internals.  The ITG filter they normally run on the throttles has been replaced for this event with the older mesh casing, as the ITG filter robs them of about 10% of engine power.  So, the ITG filter will only be utilized during testing, when more track time is utilized and the chance of debris infiltrating the motor is a concern.  They’ll need every bit of power they can get when going for the record though, so it’s a necessary risk. 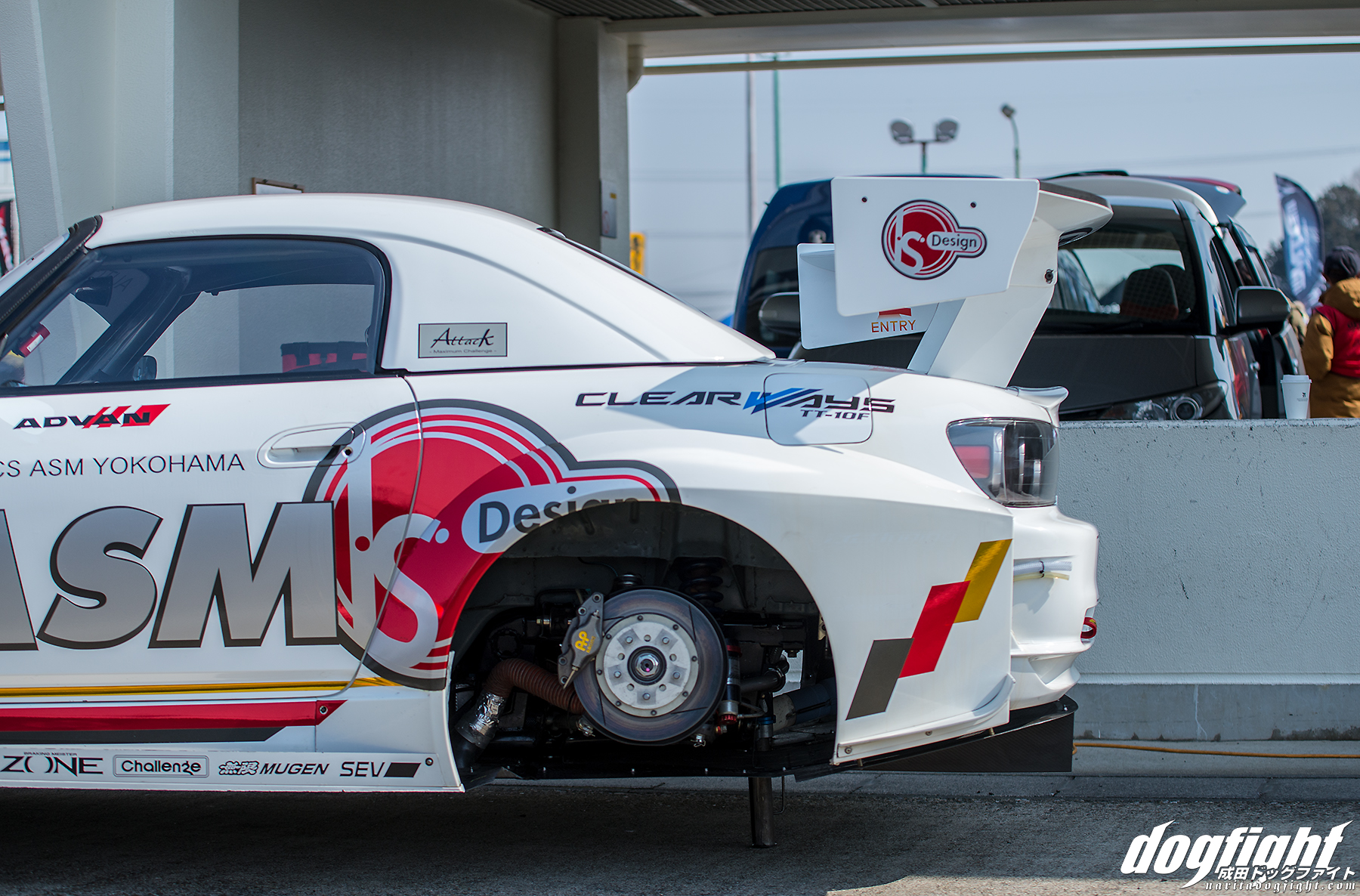 AP Racing Brakes at all four corners allow Kato Hiroki, the driver, to brake as late as possible into every corner.  The kit provides more than enough stopping power for the lightweight contender. 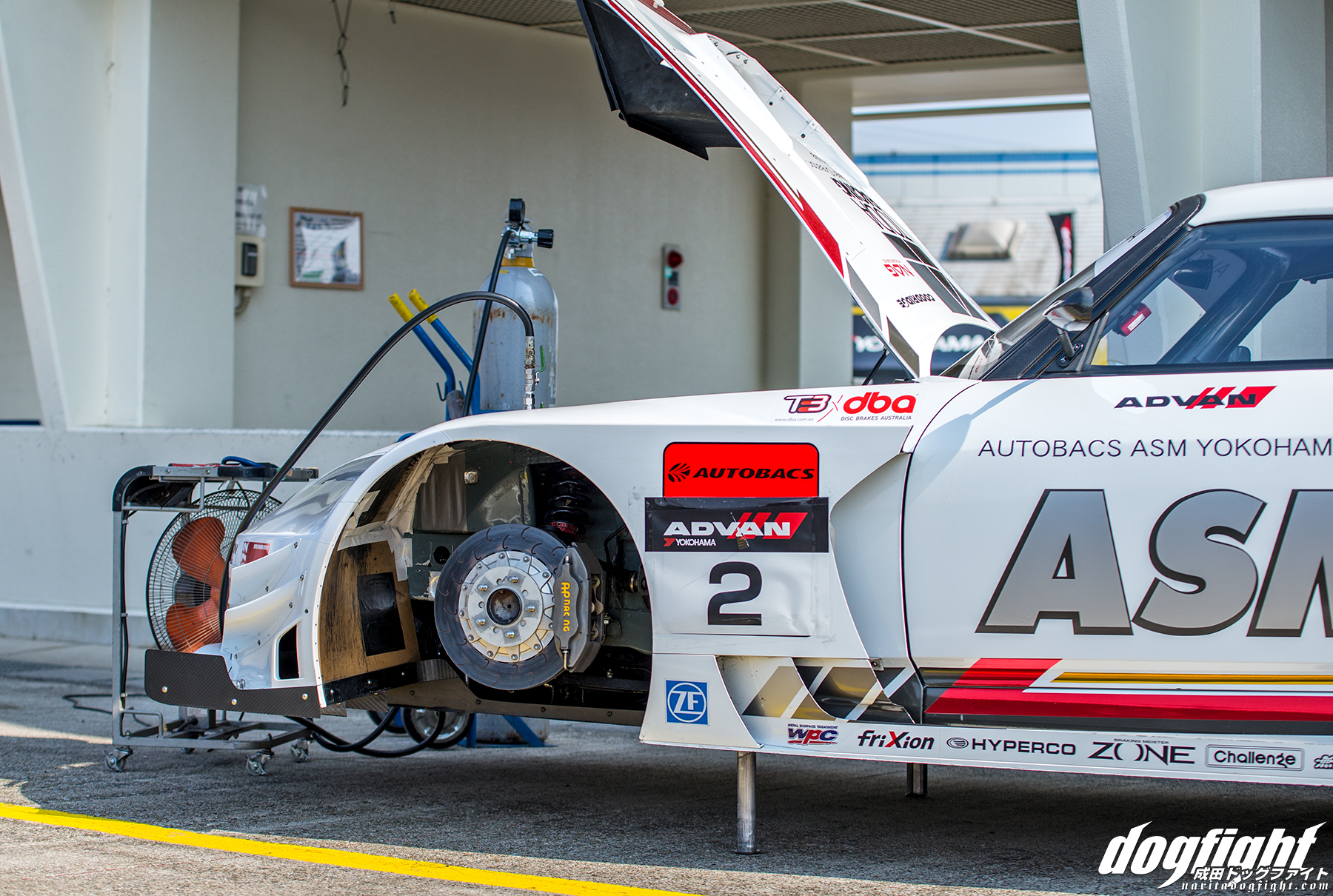 Among the plethora of amazing parts equipped on this car, there’s a large source of desire that I feel when looking at one in-particular; the ASM ZF 3-way suspension.  The coilovers were developed in part with the ZF Race Engineering division of SACHS; the German parts developer whose motor sport division is associated with series like Super GT, DTM, WRC, even Formula 1.  The package is something ASM offers to it’s customers – if you’re feeling a bit zealous about your suspension needs, you can obtain it for about $12,000.  They mate the coilovers with 12.5k HyperCo springs all around. 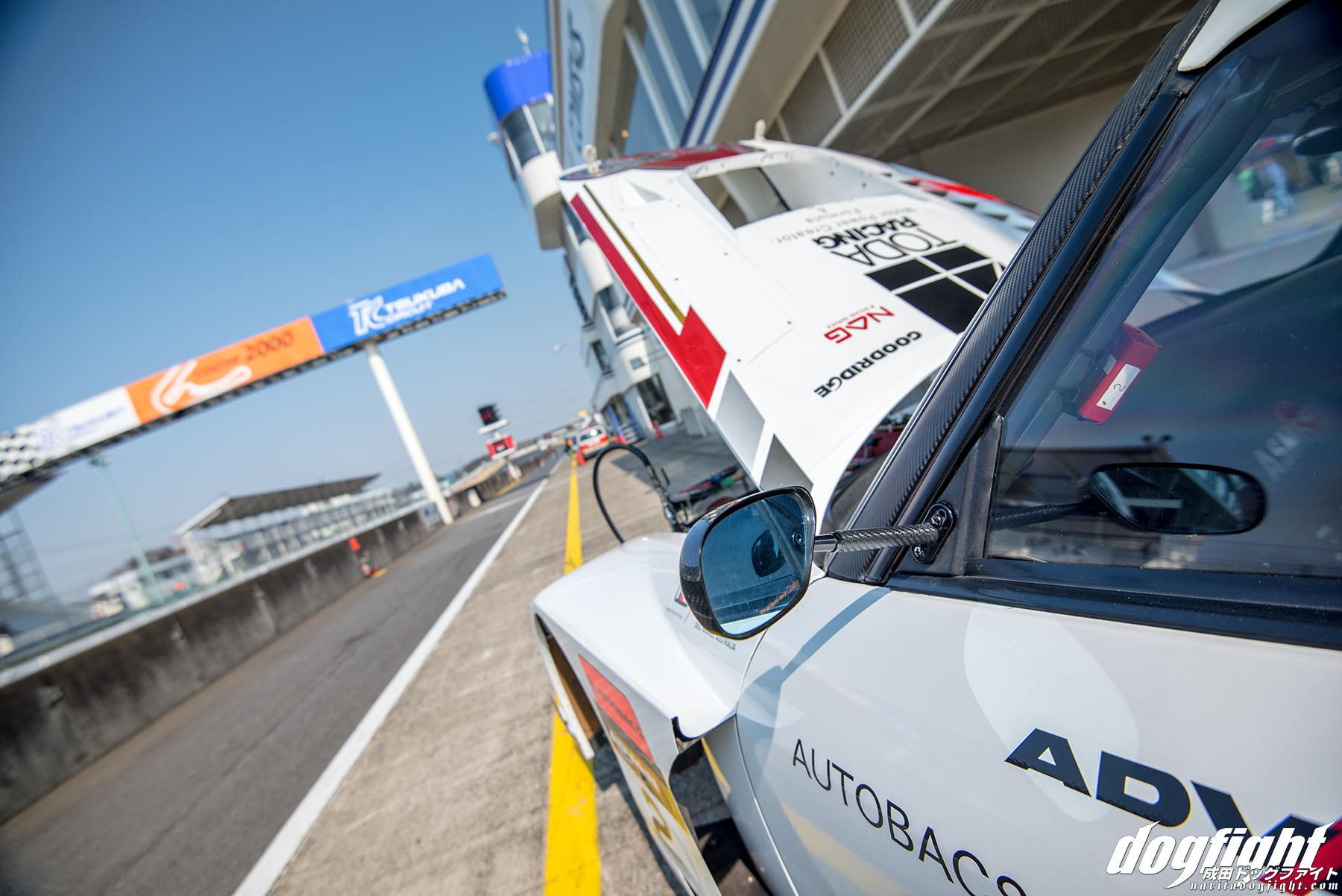 M Racing carbon side mirrors with a custom carbon mount allow Kato to see if anyone is coming up behind him while still looking stylish.  They’re a good accessory to the rest of the ASM widebody… 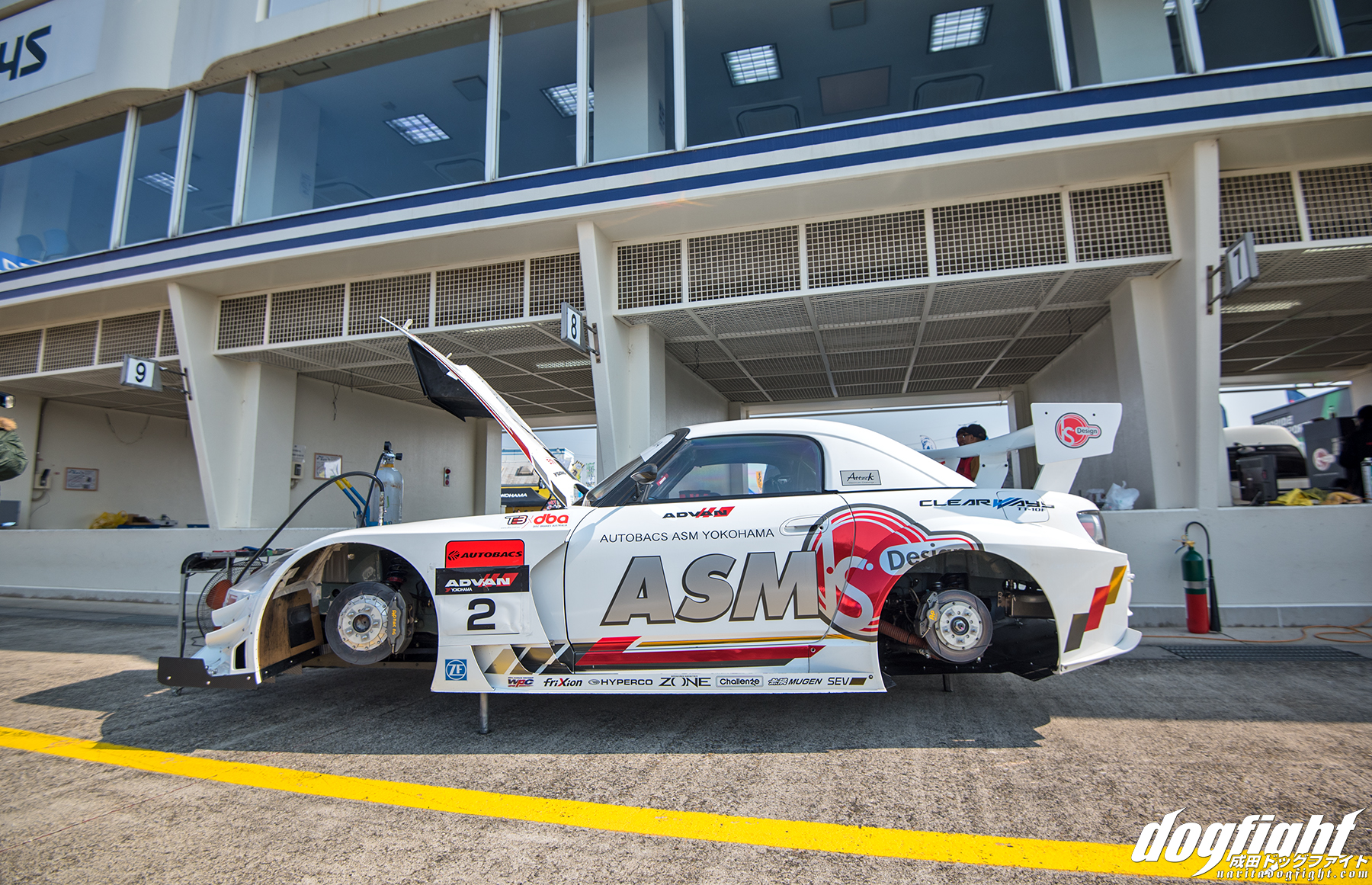 …which is comprised of every exterior part that ASM makes.  I won’t go into detail as most people know about these and how great they look.  There are a few tweaks that aren’t visible on the surface that the team experimented with the get a few extra tenths of time off the clock.  Looking towards the aerodynamics of the La Ferrari of all things, they noticed a few unique attributes to the center floor.  They ended up adding a 10 mm, L-shaped fin to either side of the center of their under tray with the intent on quickly pulling turbulent air flow out of from the bottom center of the car.  Wind tunnel tests before the modification showed dirty air around the center of the floor caused by air that was extracted from the inner fenders, compromising air flow underneath the car. The wind tunnel tests after the small modification showed smooth air flow out the back which in turn greatly reduced the turbulence felt by the rear diffuser.  So, just like that, by using a piece of plastic purchased at a home improvement store, they greatly increased the efficiency of their aero.

Along with this rather peculiar modification, they also added a fin that reduces air flow into the wheel well and increased the overall width and rigidity of the diffuser to better suit the larger 295/30/18 tires that were being used for the event. 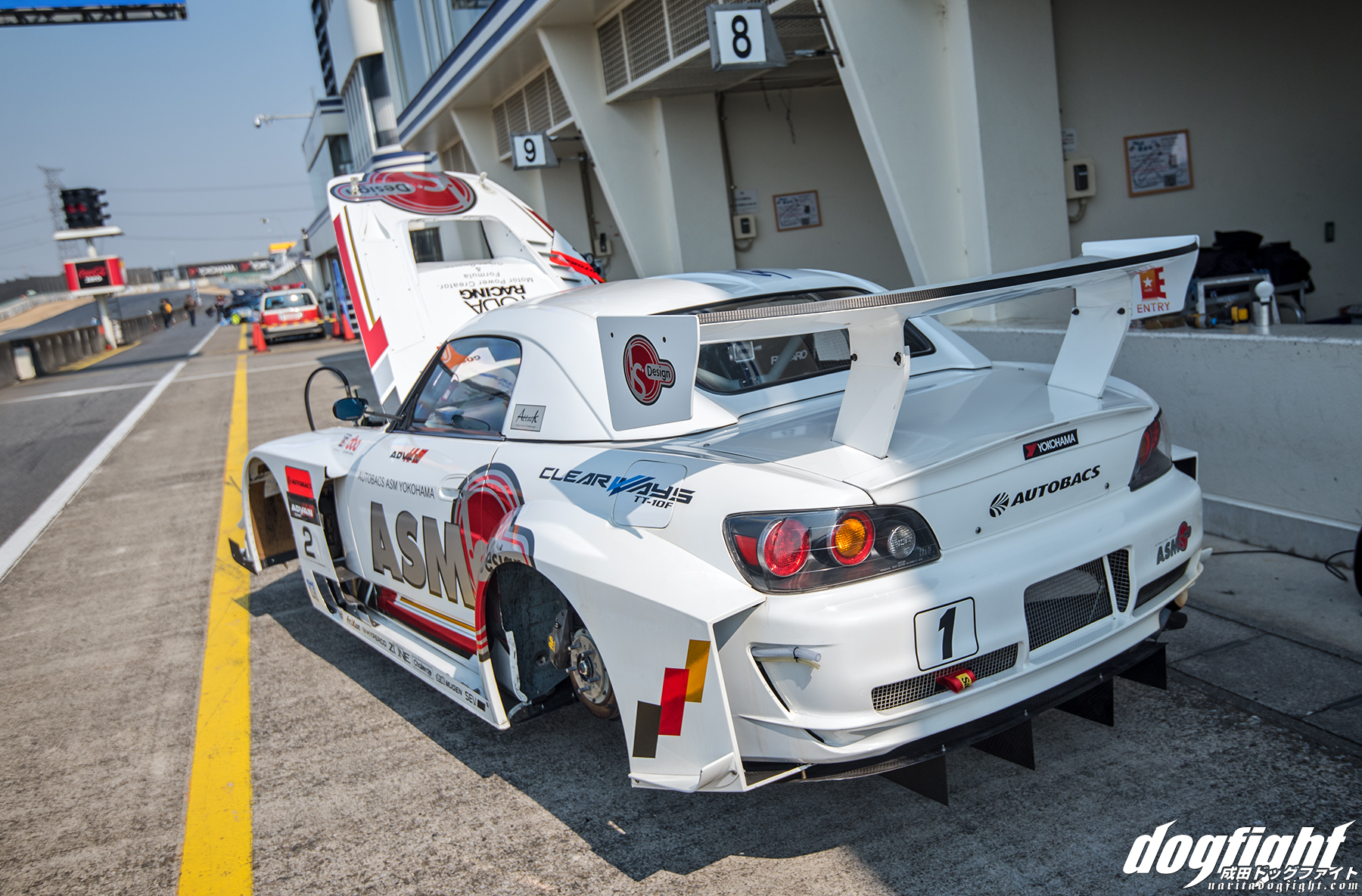 The whole package is very impressive no matter which way you slice it. 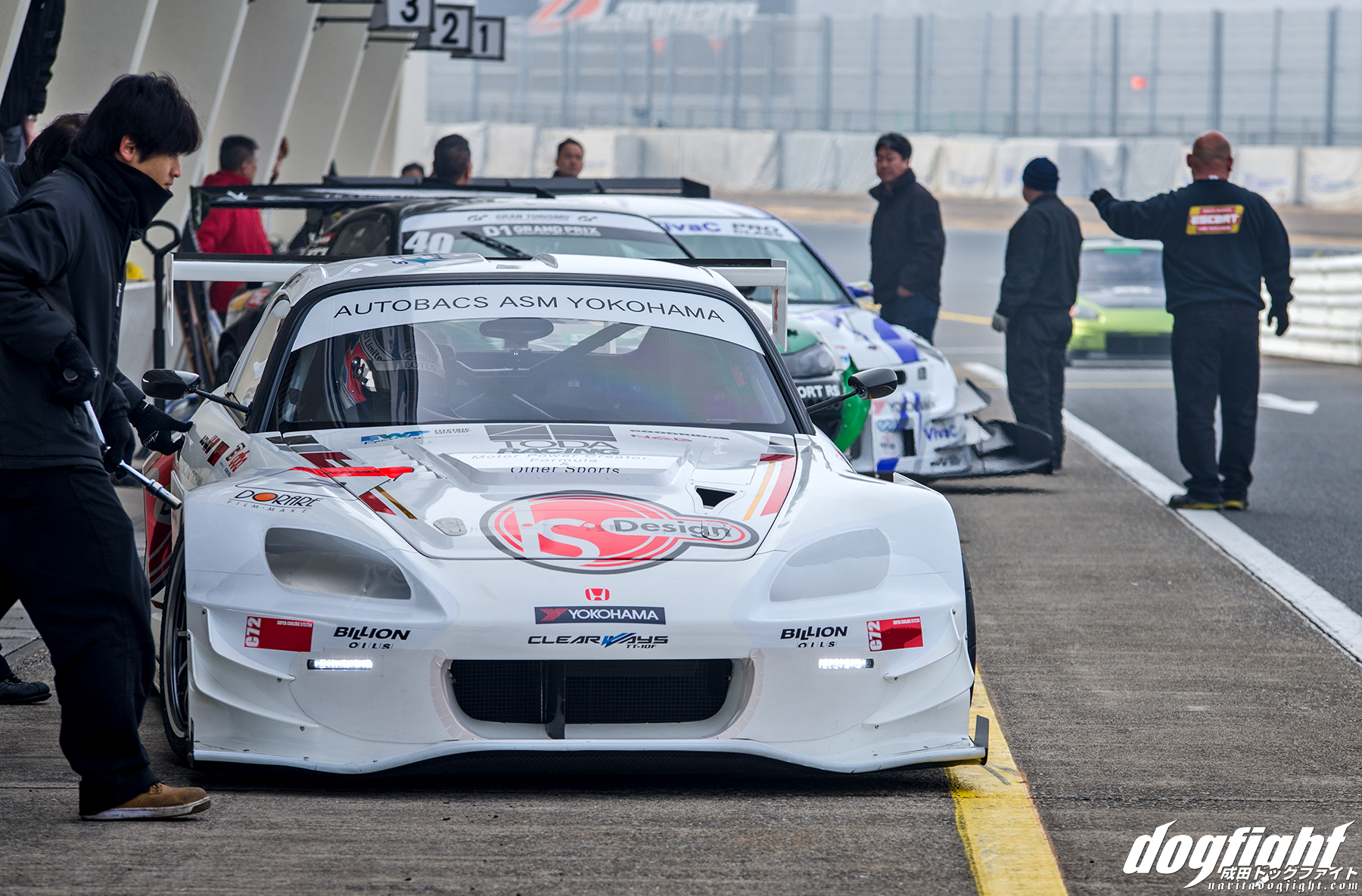 Heading out for the first session, I had high hopes that the car would break the 57 second barrier.  While they weren’t quite able to do that, they did recapture both the fastest NA S2000 record on their first session out, and the following session they updated the fastest radial tire NA tuning car record.  Which equated to a 57’051 second lap and a 57’935 second lap; Advan A050 and Advan A052 respectively.  Very, very impressive. 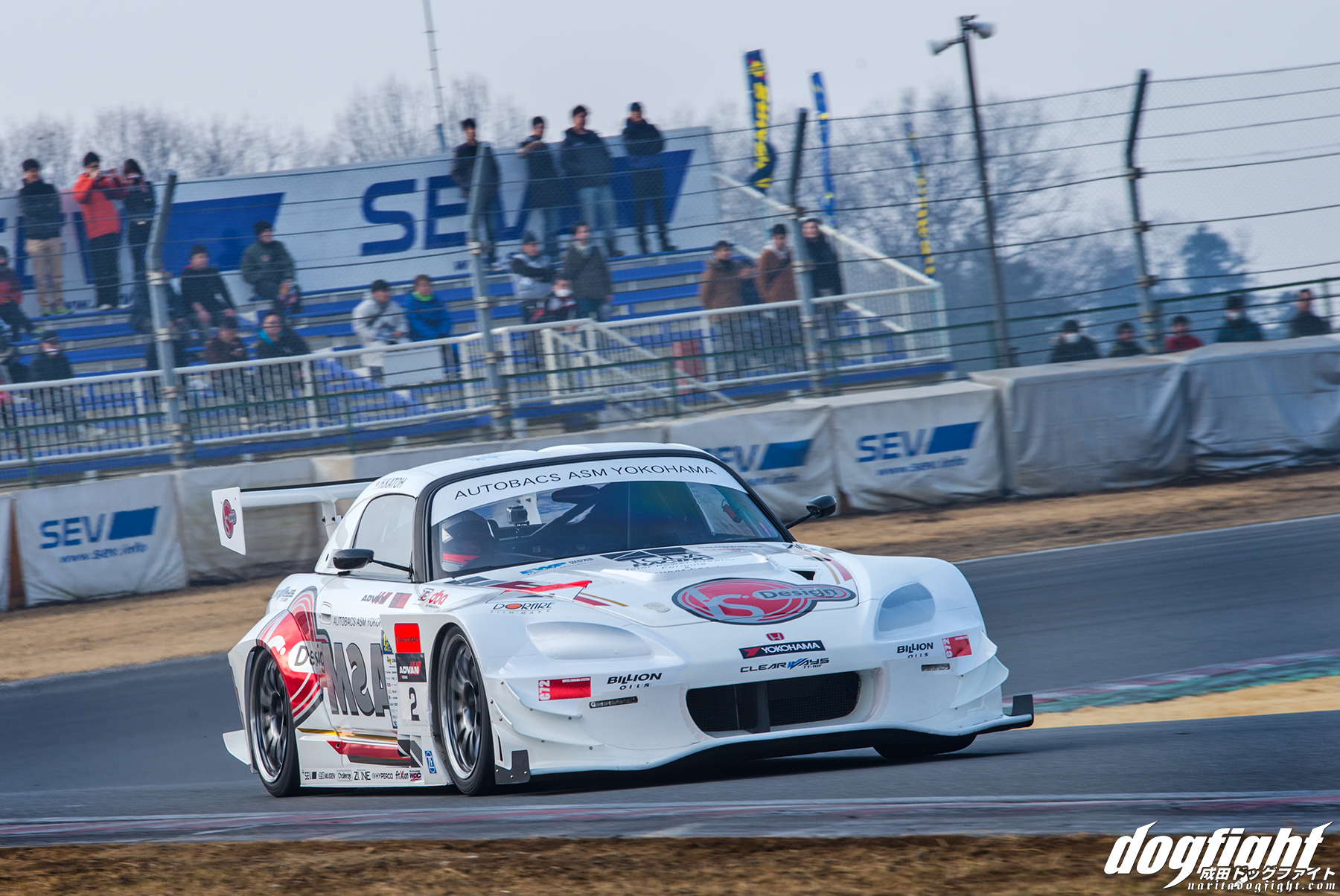 The entire time Kato was out on track, the car just looked planted.  It didn’t appear he had to fight the car to get those times, which leads me to believe that very soon they will be in the 56 range and in contention for becoming the second fastest NA tuning car, surpassing the Aslan EG6. 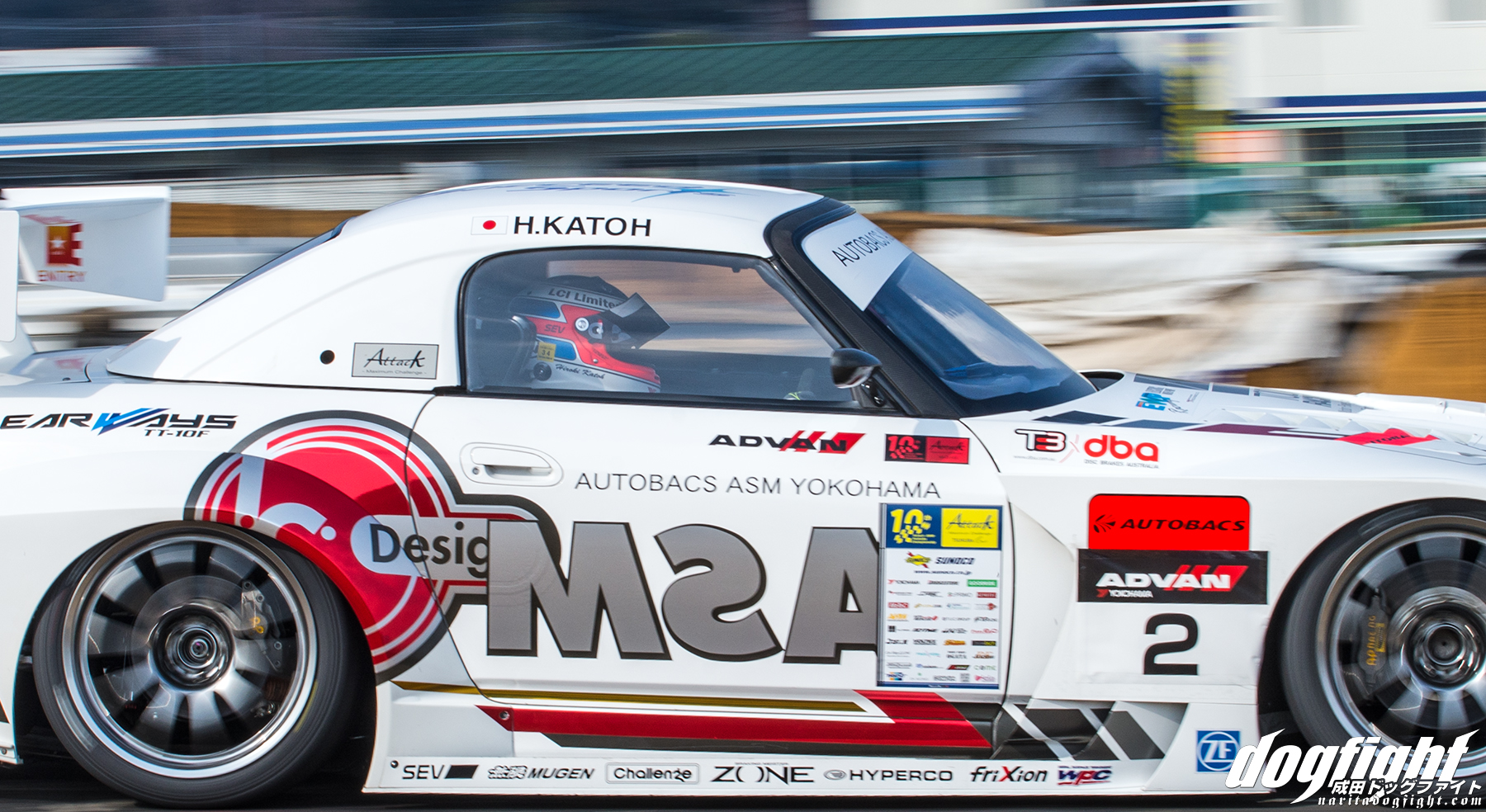 The BBS TT-10F is a perfectly matched wheel for the car, and in my opinion look so much better than the Prodrives that are usually on it. 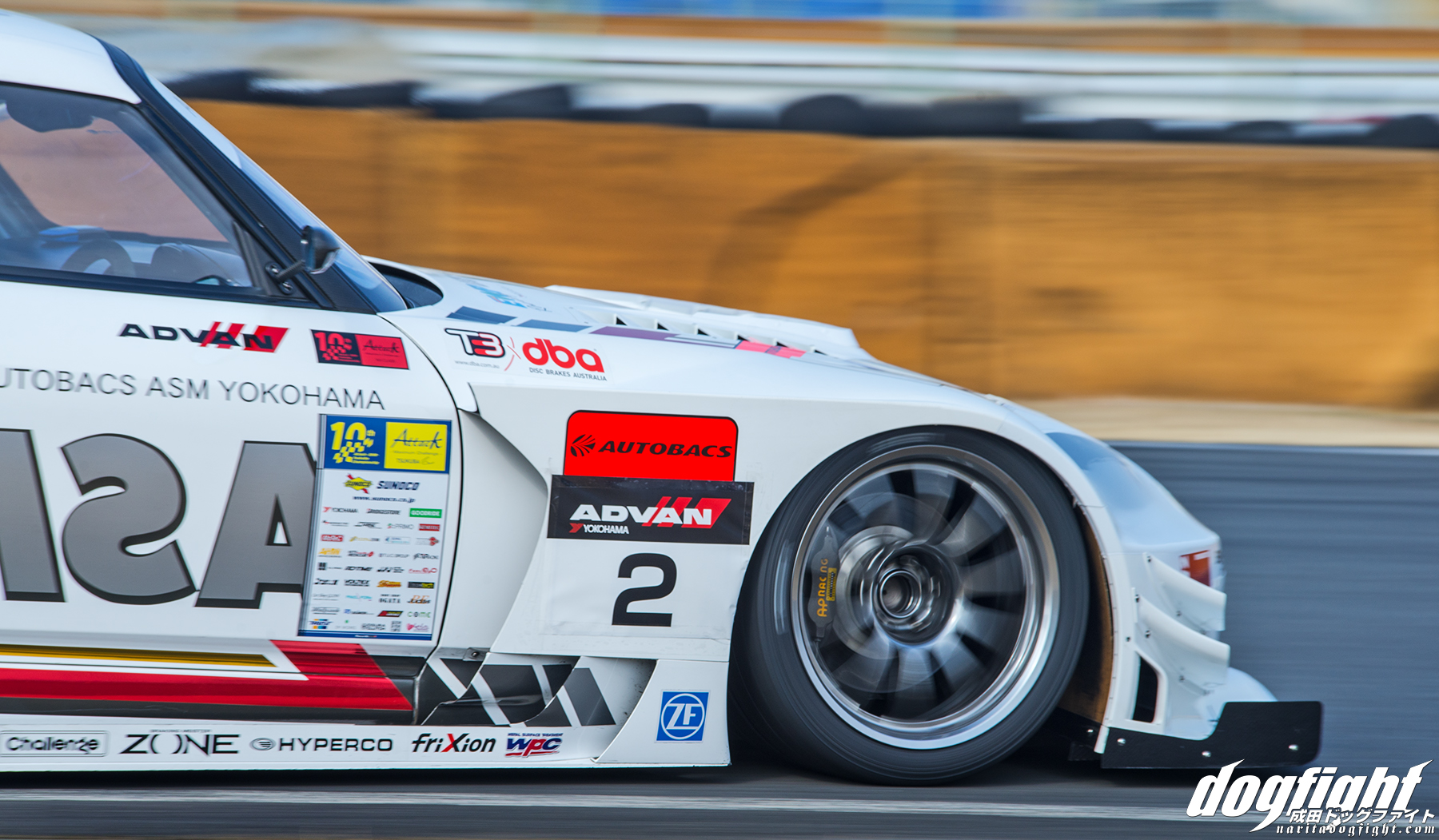 While ASM was able to hold onto their current titles for now, they are well aware of the competition just behind them.  If you follow us on Instagram, you’ll remember the green Arvou S2000 I had posted awhile ago. That car ran a 57’585 and has very little aerodynamic development in comparison to the ASM S2000.  Admittedly, if that car was developed further to take advantage of aerodynamic grip, it would most likely surpass ASM.  Knowing this, we can expect ASM to pull out a few different cards they have up their sleeve for the coming season. 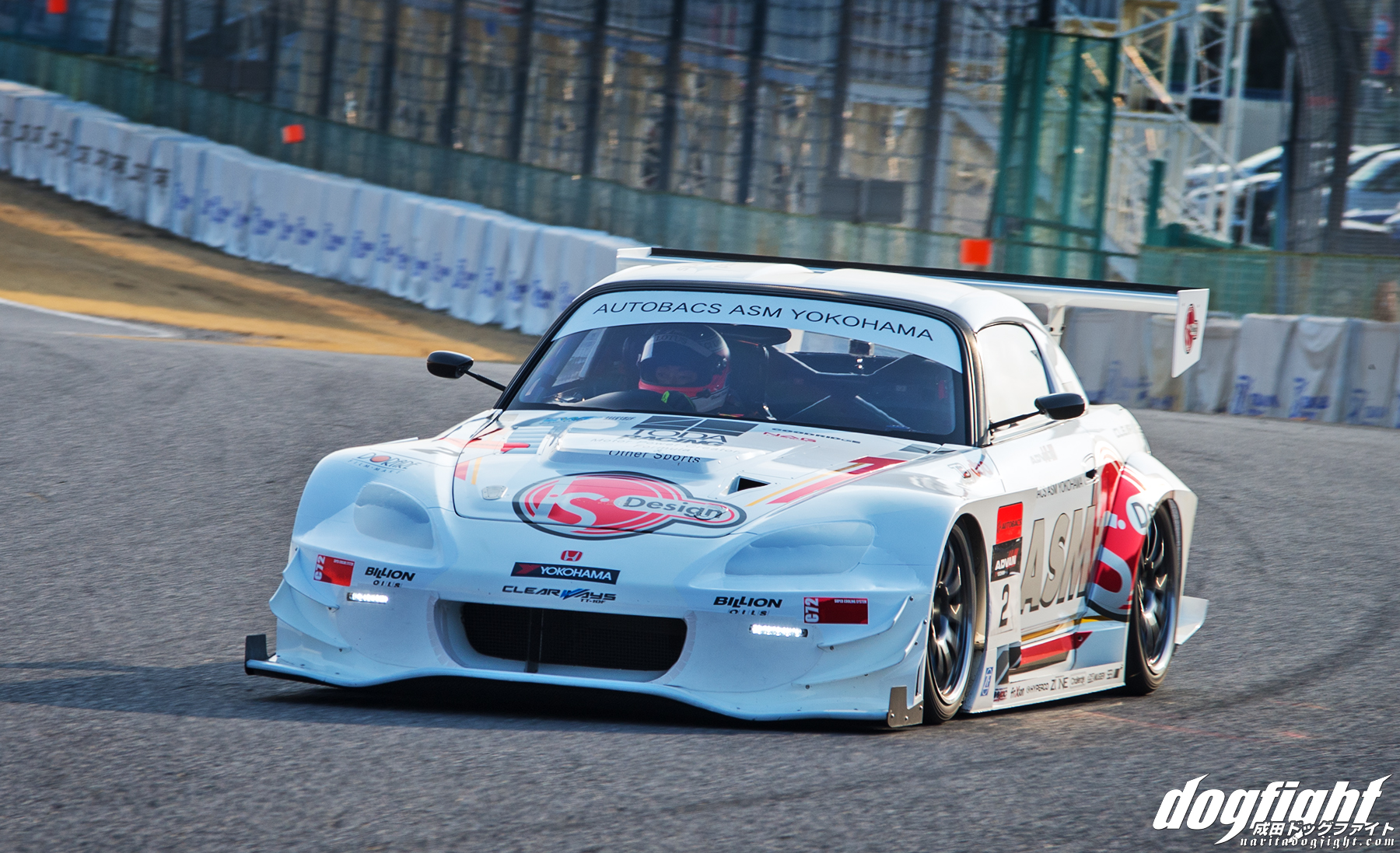 Overall ASM took third place in the NA class at the Tsukuba Championships.  First being the 3 rotor Full Stage FD, and second going to Ton and his EG6 with an incredible 56’546 (which I’ll have more on later). 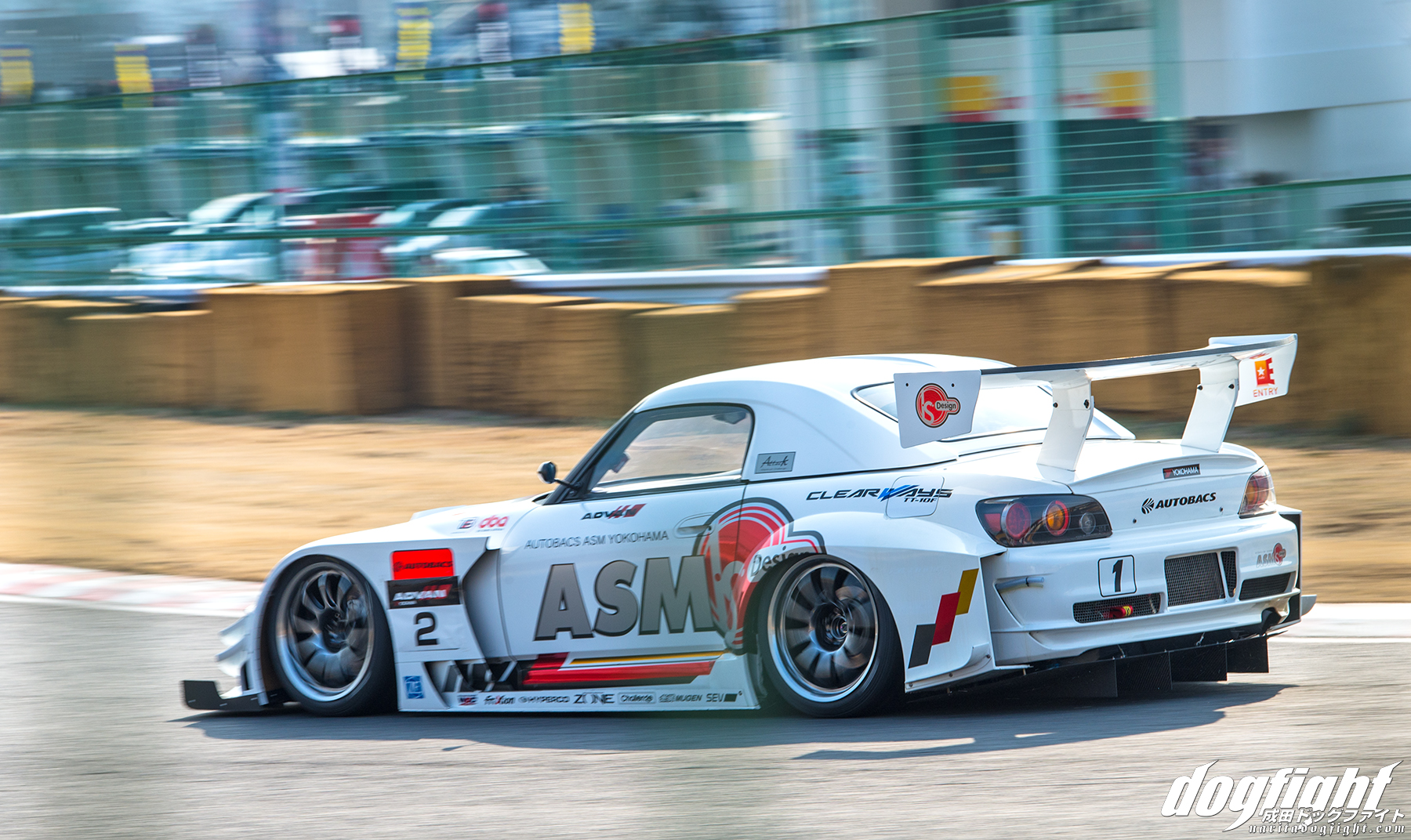 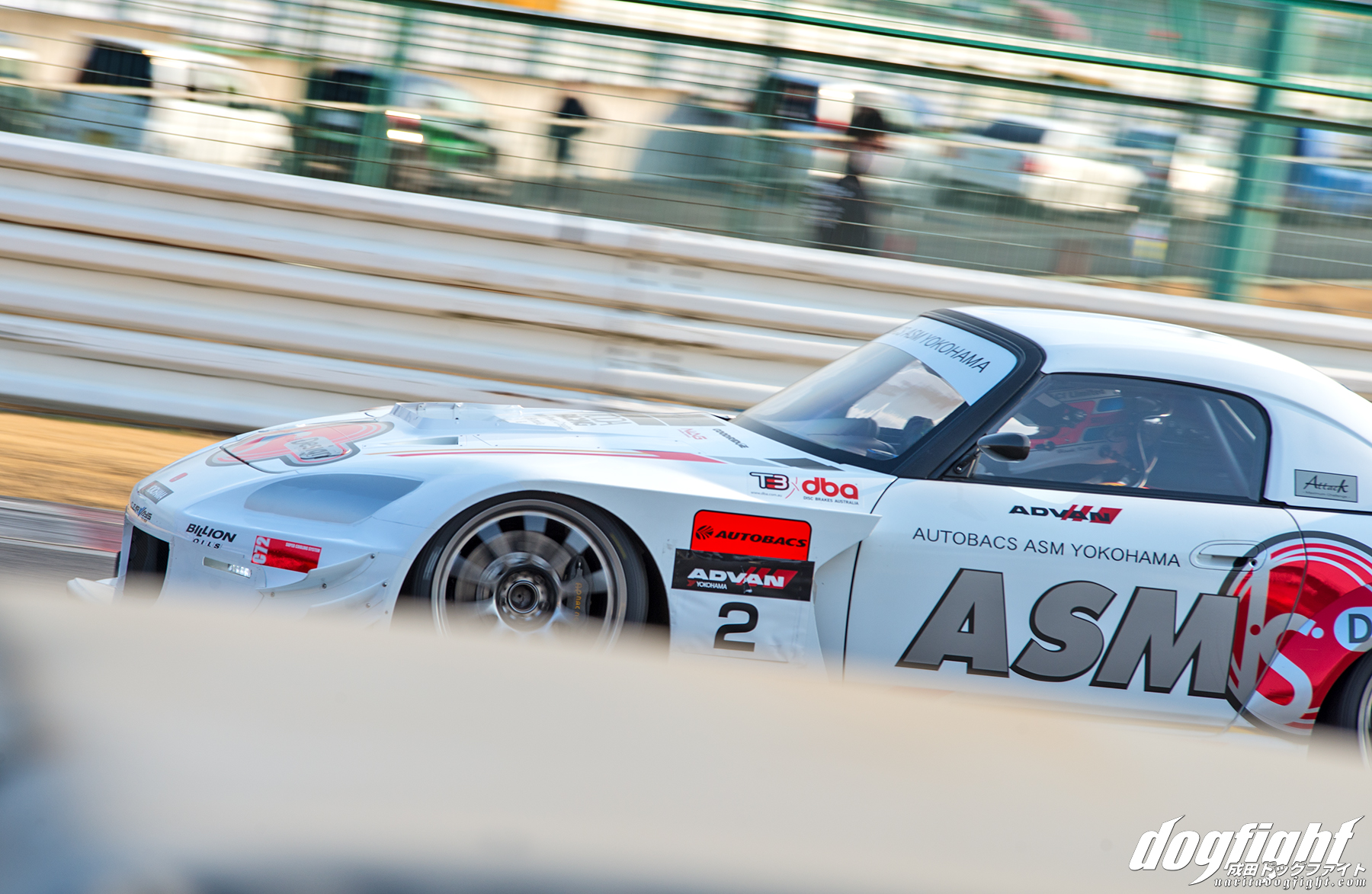 I’m looking forward to seeing this car a lot more often.  If their campaign at Attack was any indication of how serious they are about keeping their title, then the boys at ASM are going to be putting on a good show this season.