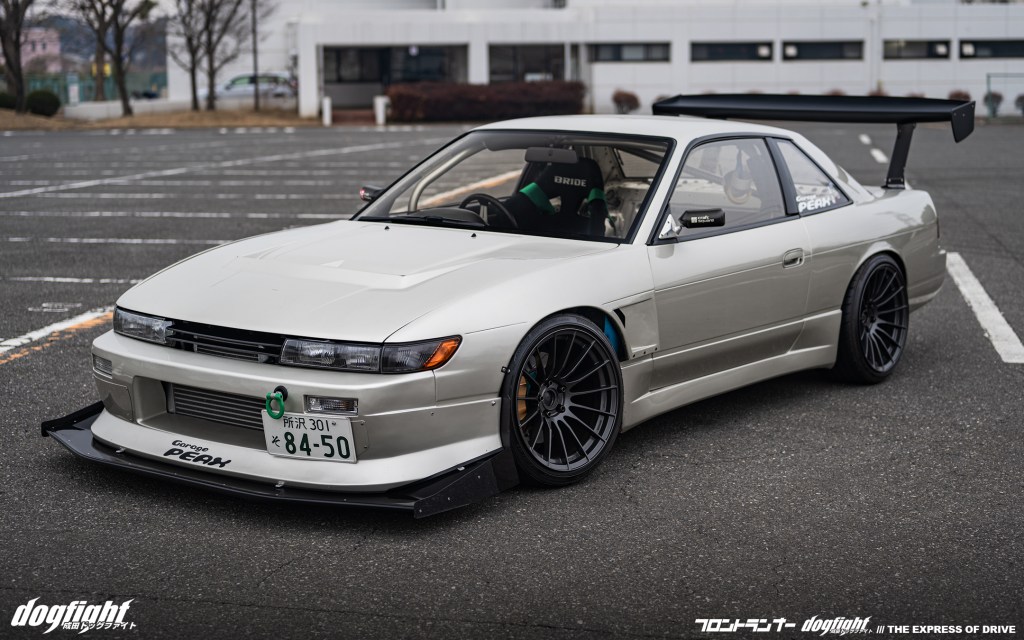 Battle Evome is a now defunct event series that, in it’s prime, was among the most popular time attack event hosts at Tsukuba, running from the late 90’s through 2016. 7 years ago to this day (Jan 16th 2016), I was attending one of the final Battle Evome events ever when I ran into Okizo and his Silvia.

Up until that point I had not seen too many good examples of a properly built time attack s-chassis; let alone any at the circuit at all.  I was immediately struck by the beautiful simplicity of it.  It was a car that stuck with me for years, and I know many people who have the same sentiment towards it after seeing the original article.

Last month, when I was looking at the entry list for the Zummy events I had planned to attend while in Japan, I did not see Okizo on the list for any of the events.  So, you can imagine how surprised I was to see him last weekend at the track.  It turns out he was running in the DKM Challenge event that was taking place just before the Zummy runs.  DKM Challenge, as covered on our new YouTube video, is a series that doesn’t yet have a published entry list on their site.  After the event, when he was finished packing up, I asked him if it was okay to take a few photos outside the circuit before he left.  He happily obliged, and in talking he mentioned remembering our first meeting at the Evome event all those years ago. 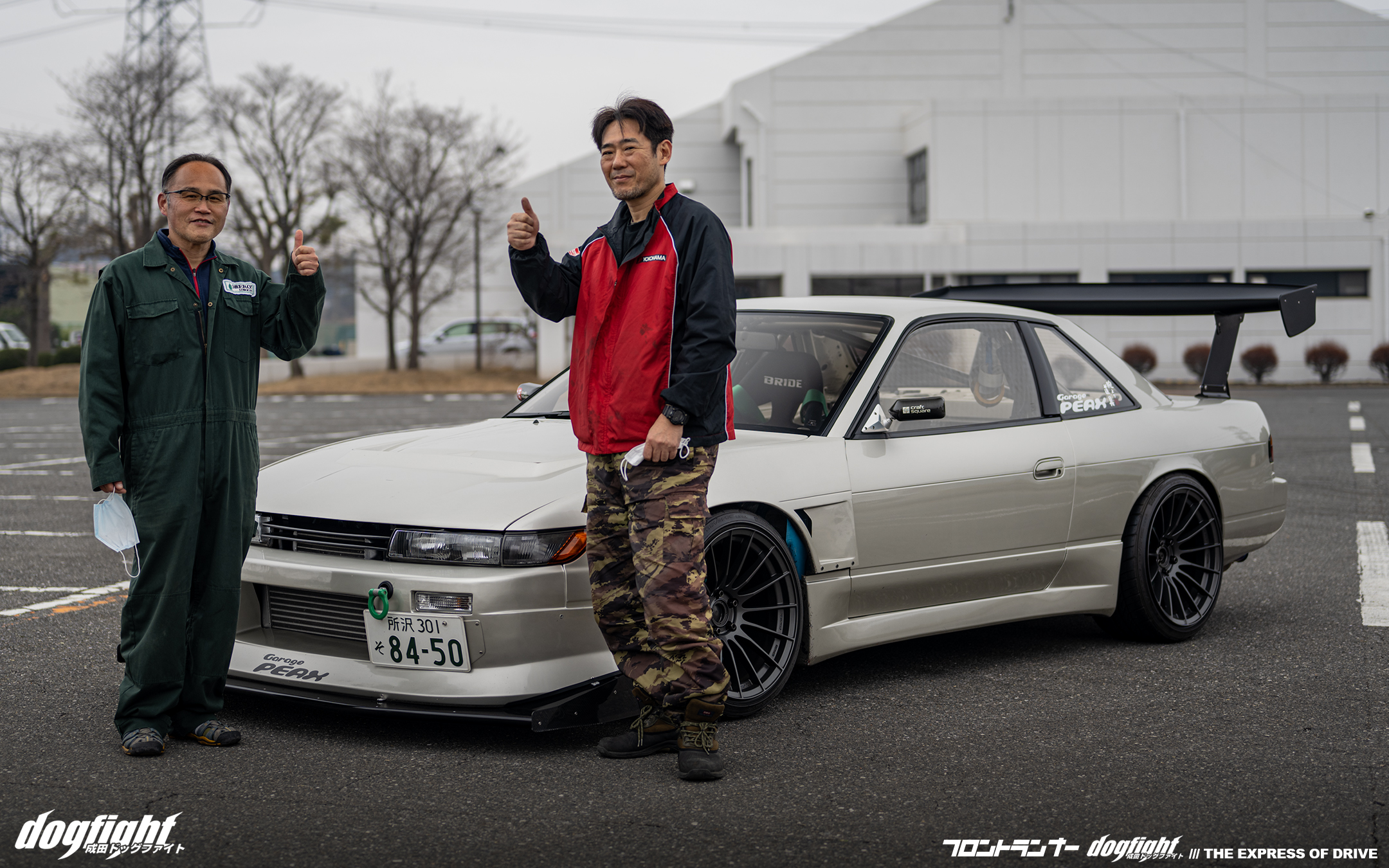 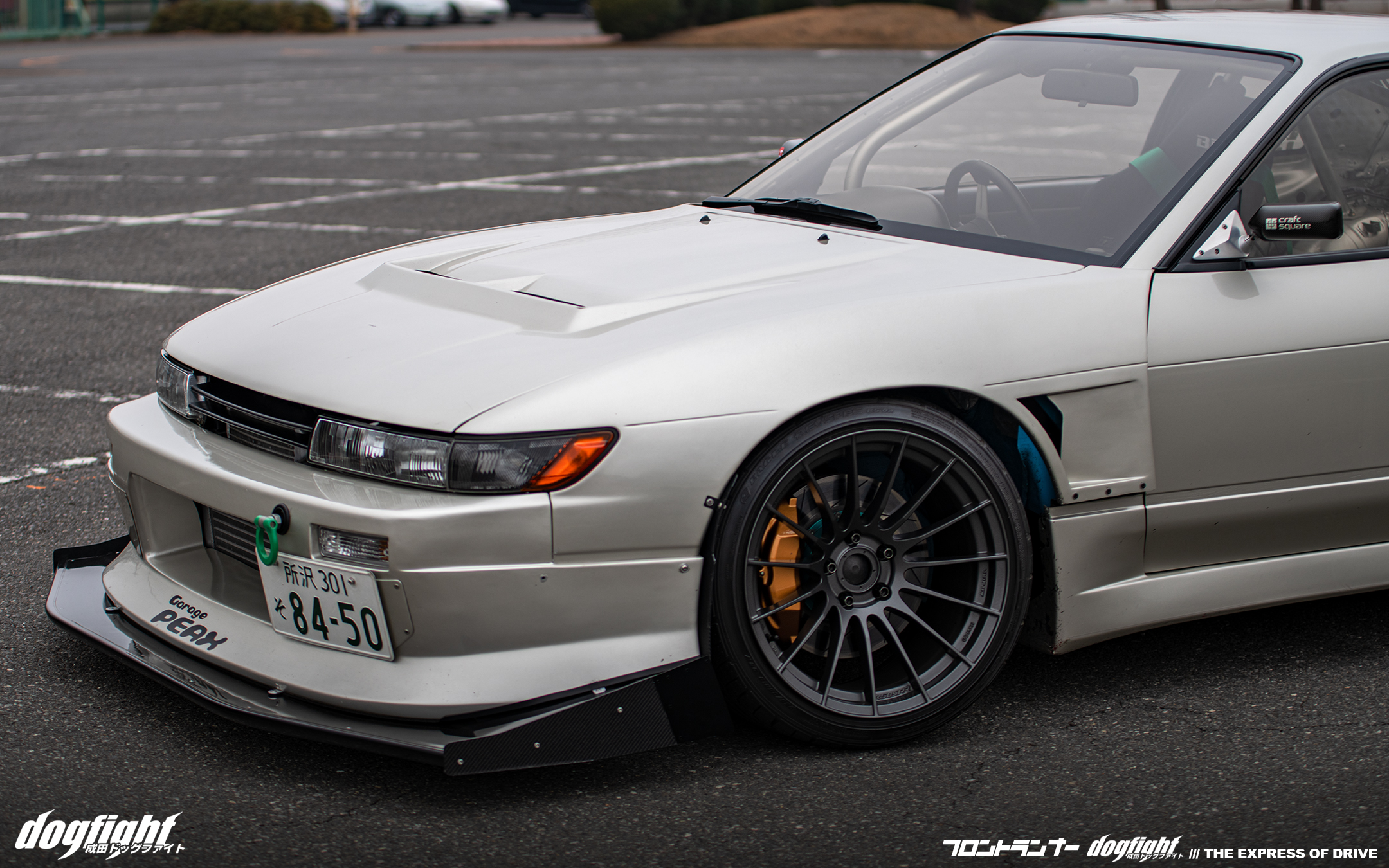 At first glance, the car appears very similar to when we first encountered it.  The overall look and sleekness that the original body of the Silvia provides remains relatively in-tact.  Among the more notable differences is their old front splitter that was made in house, has been replaced with a more effective and sorted out Garage Kagotani unit. 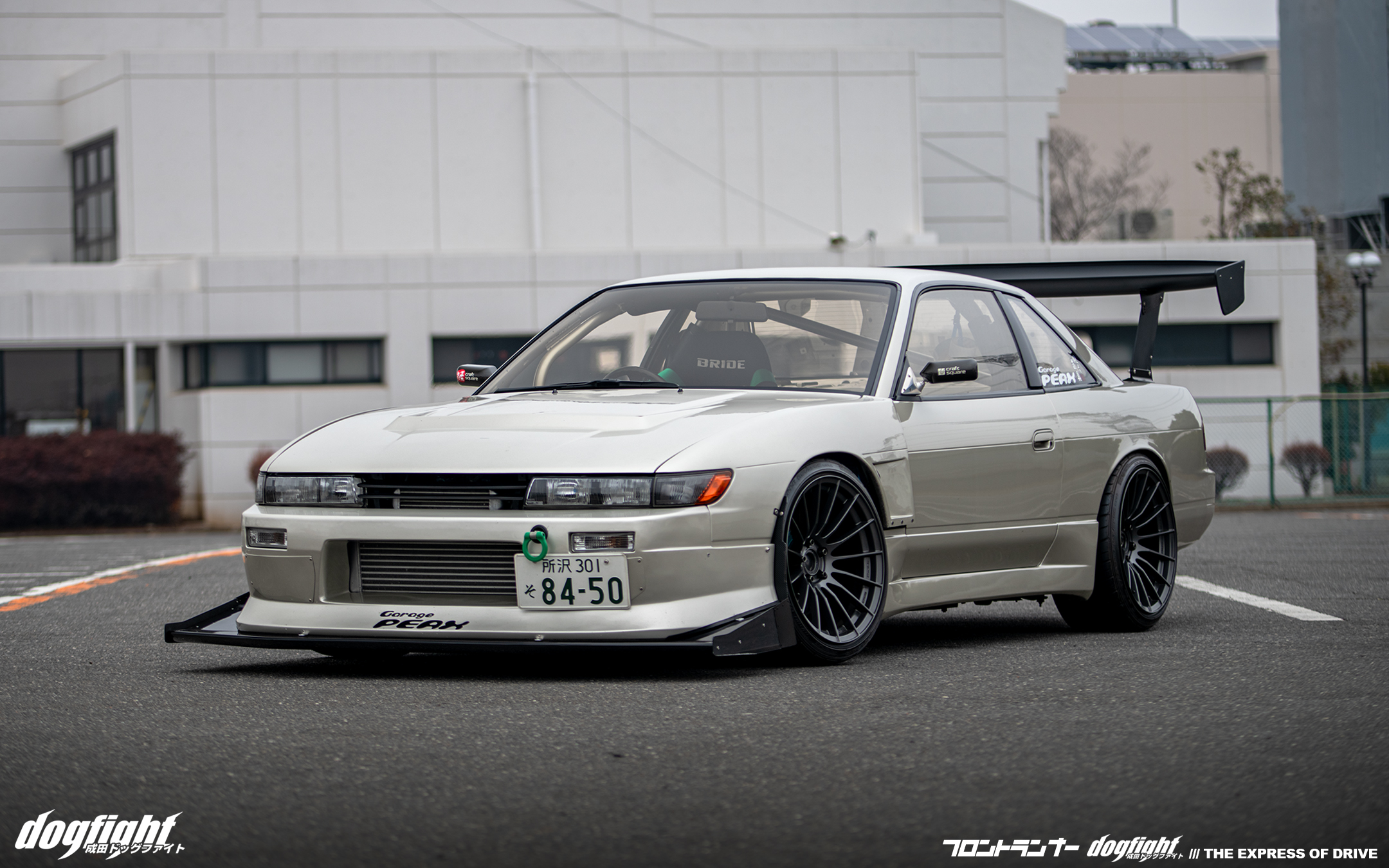 HPI DG5 dampers provide an aggressive stature and allow the car to maintain grip around whichever track it happens to be on – or the street for that matter.  The front and rear arms have been swapped with spherical ends, including the utilization of GTR arms in the rear. 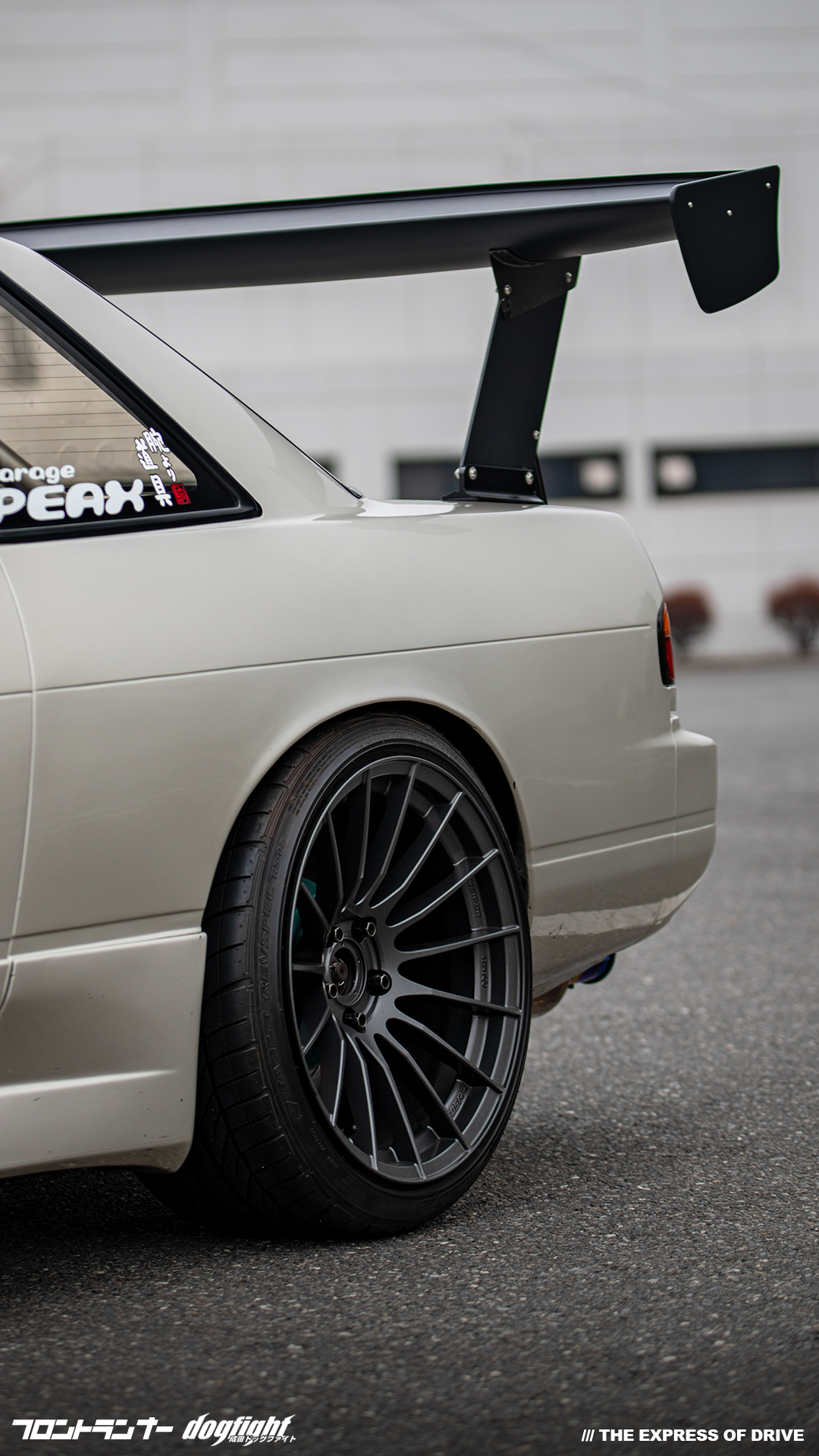 The 1800mm Esprit 052 GT wing remains in place atop the trunk lid.  In the car’s current state, the 052 provides a great balance in aerodynamic efficiency for the car.  The poise of the Esprit wing is hard to beat on lightly modified street cars. 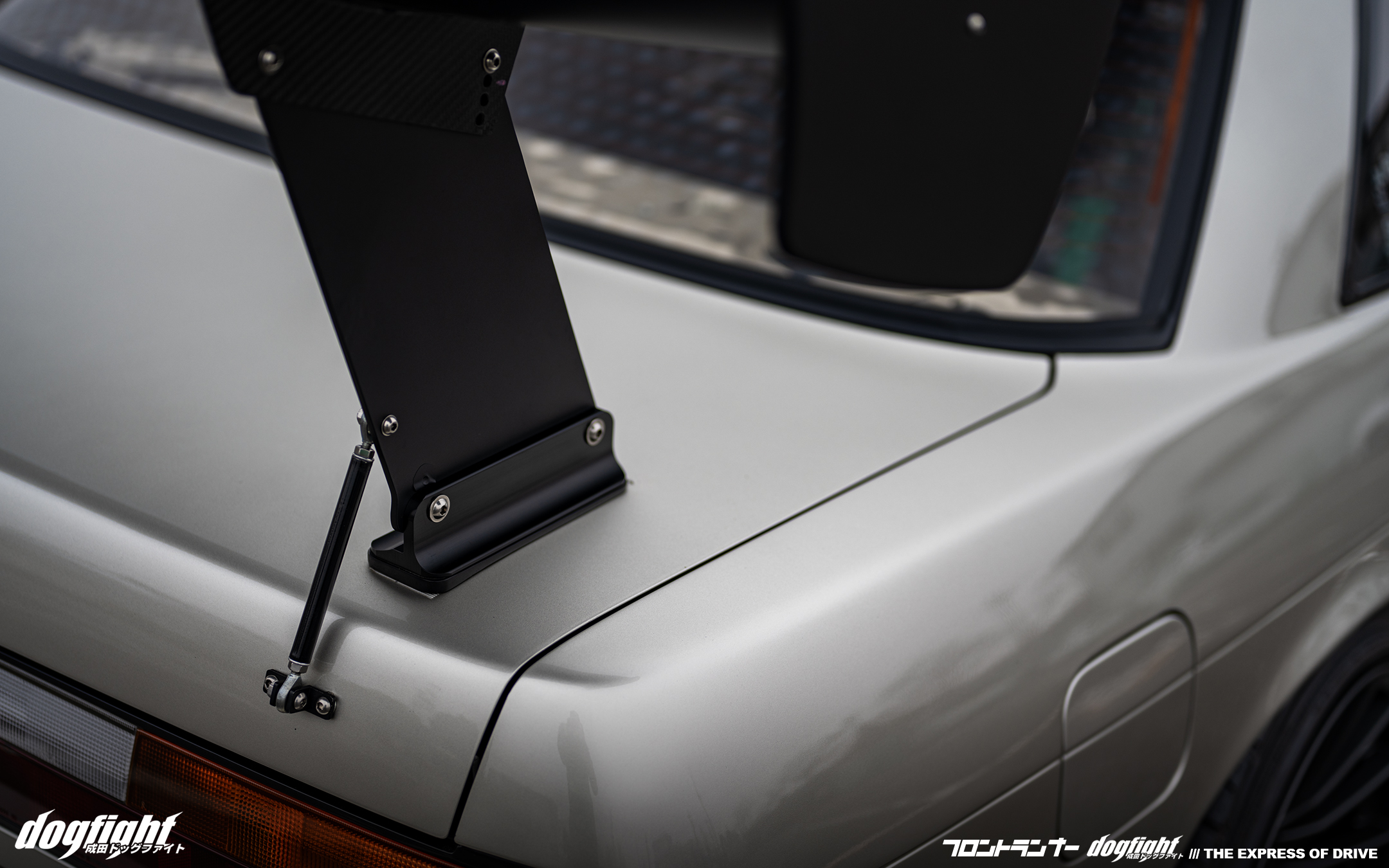 Garage Peax has added a bit more vertical rigidity with the addition of an adjustable arm, that also doubles as a way to add adjustability to the wing stand. 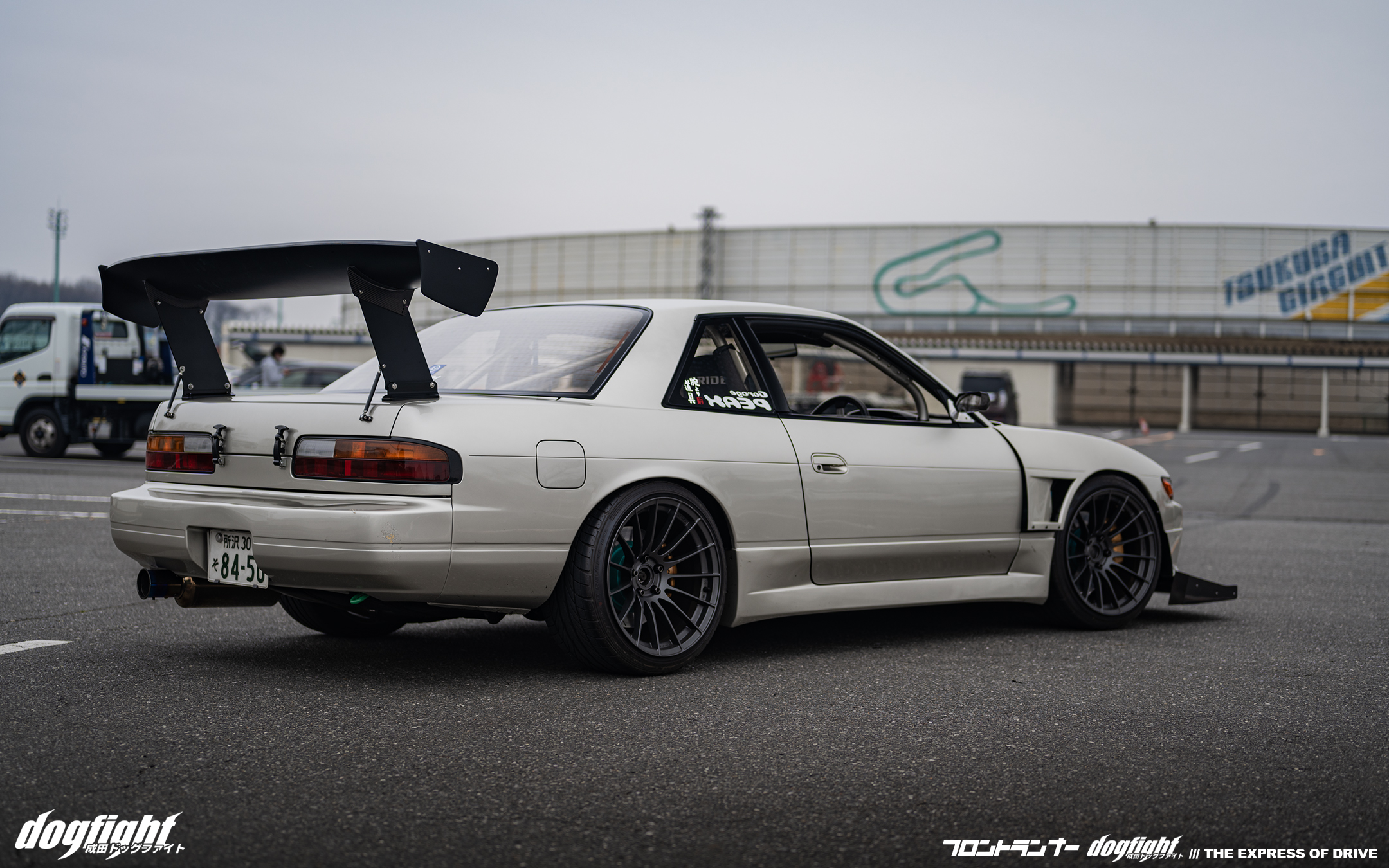 I’ve always thought that it’s the things on the car that aren’t always entirely visible that give it character.  An unseen aura if you will.  On the Garage Peax Silvia, aside from the fact that it’s been properly used at the track for well over a decade, it’s the spot welded chassis, and the reinforced S13 subframe.  The modifications that are necessary for it to live the life it has, and thus take on it’s current personality.

Extra chassis rigidity is granted by use of a 7 point roll bar, and strut bars in the front and rear of the Silvia. 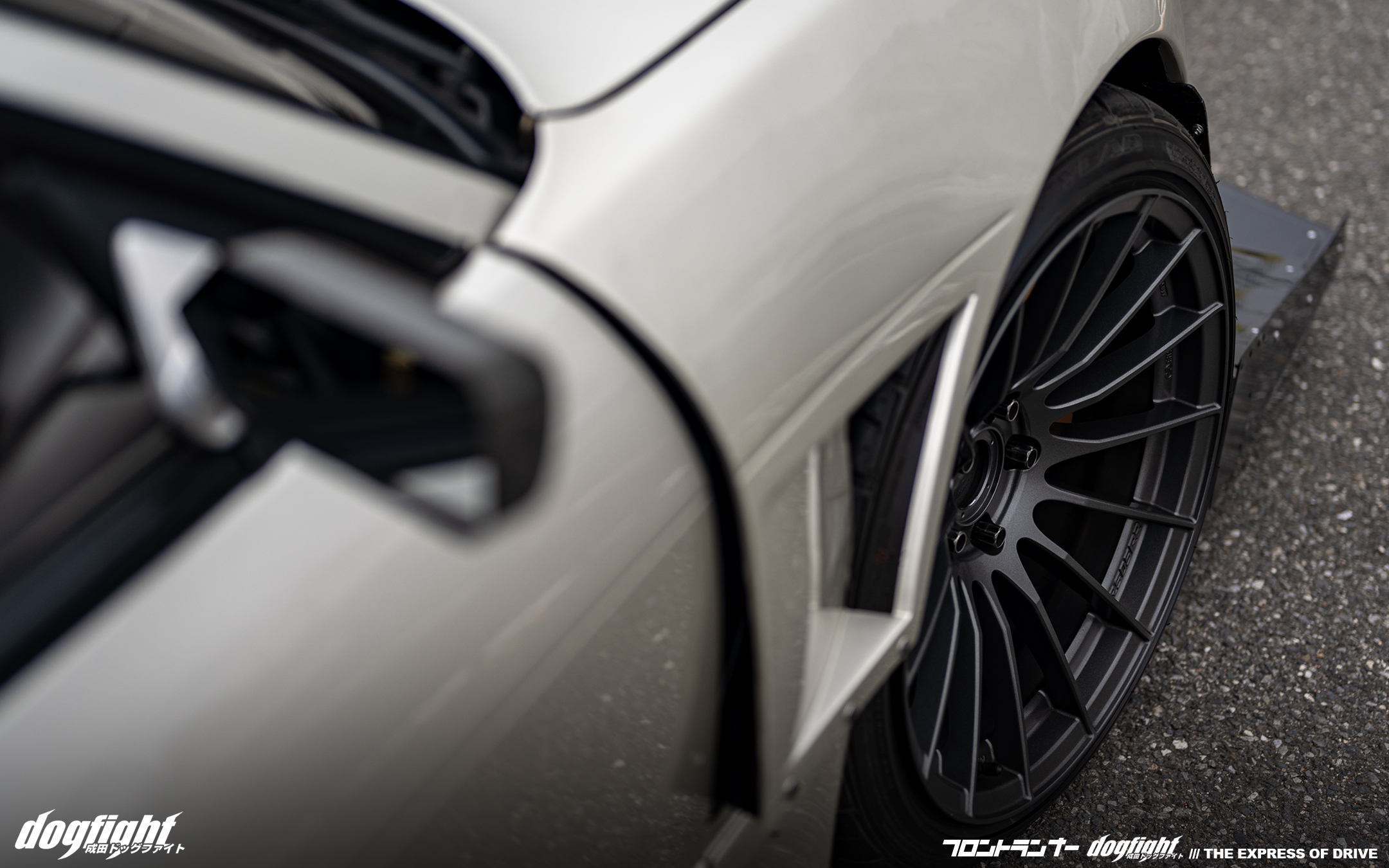 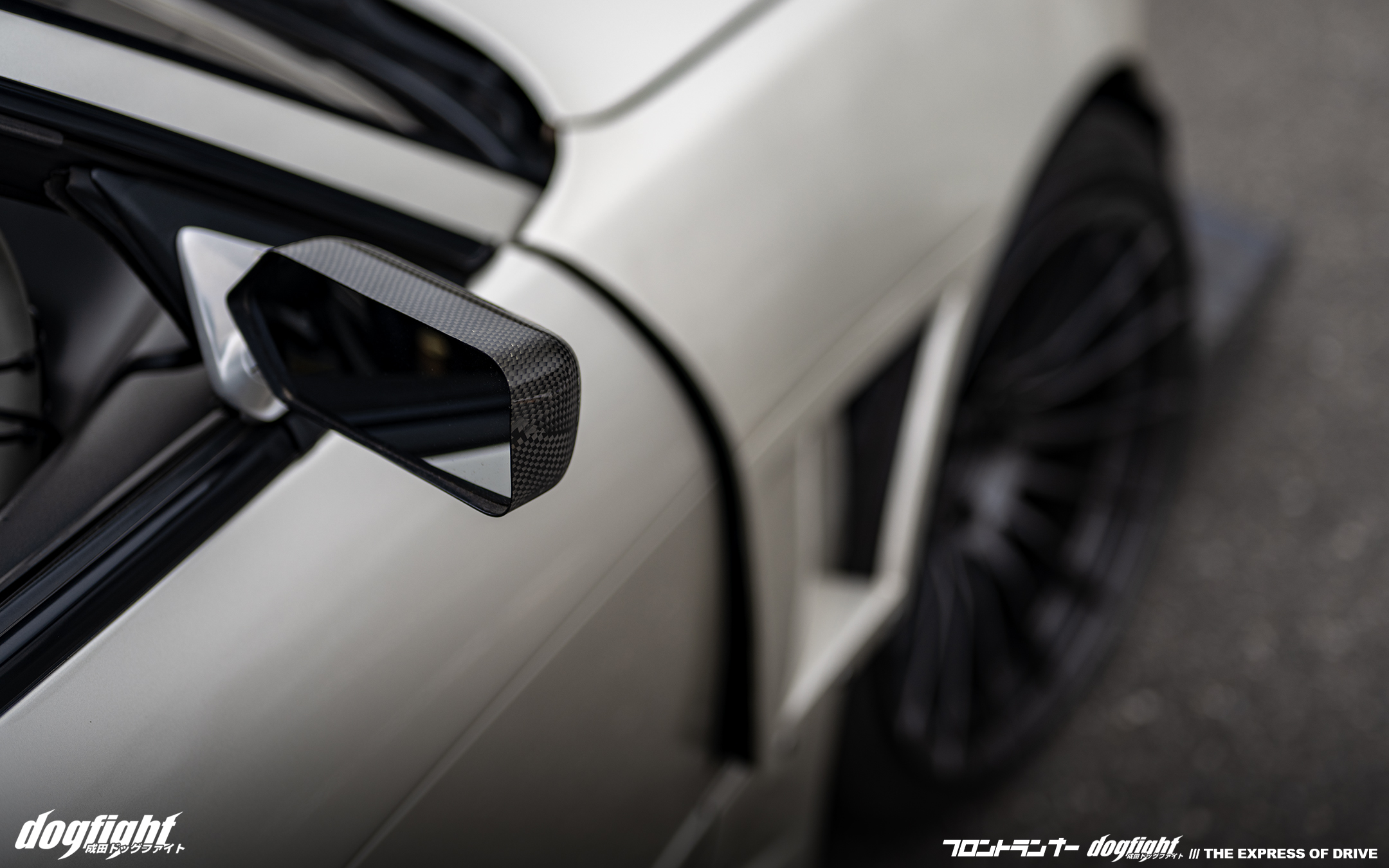 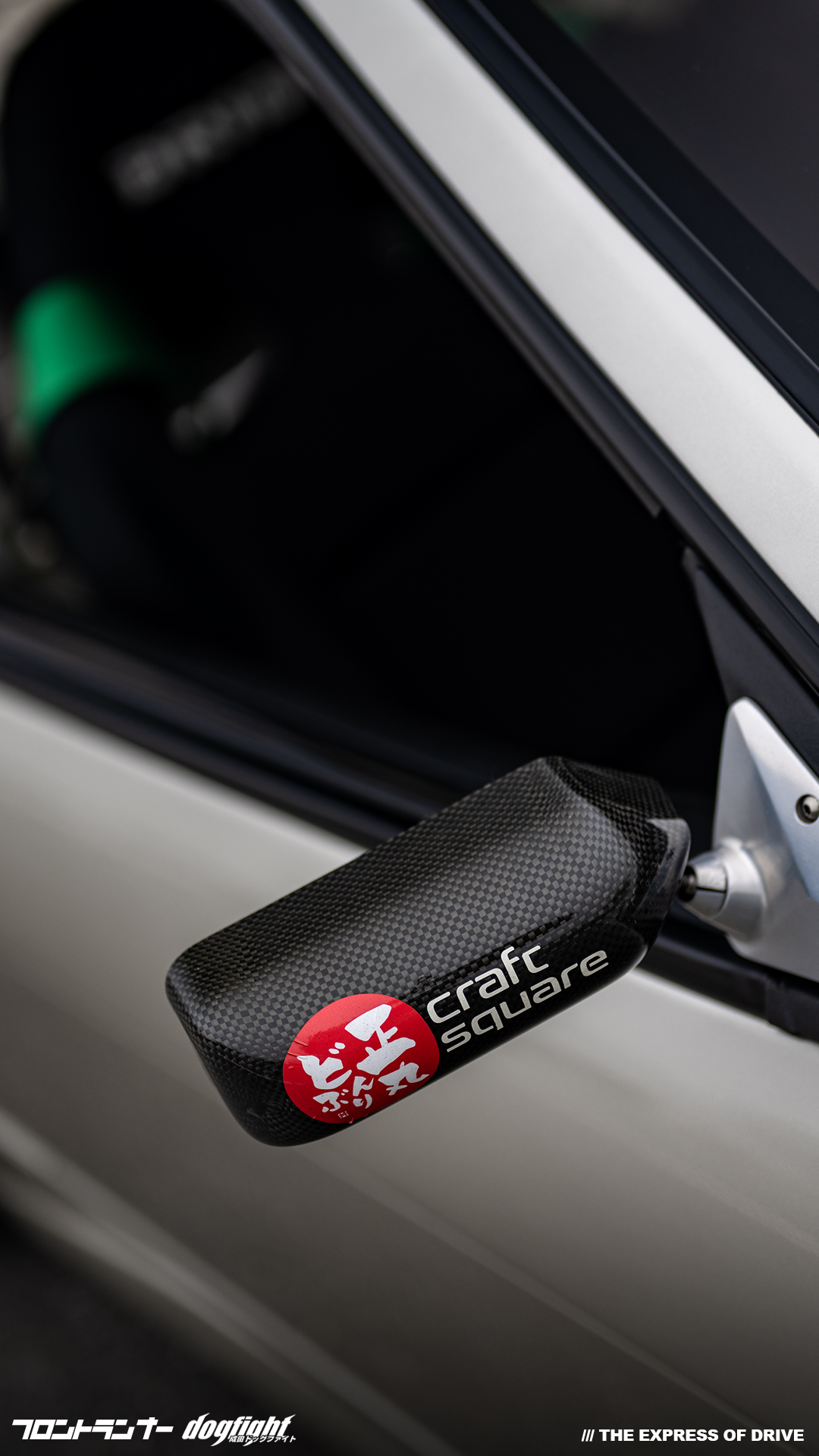 Carbon Craft Square side mirrors allow both a taste of GT styling and proper visibility for the driver.

The body line of the Silvia does a great job of encompassing the boxy styling of the 90’s – arguably more than that of the S13. 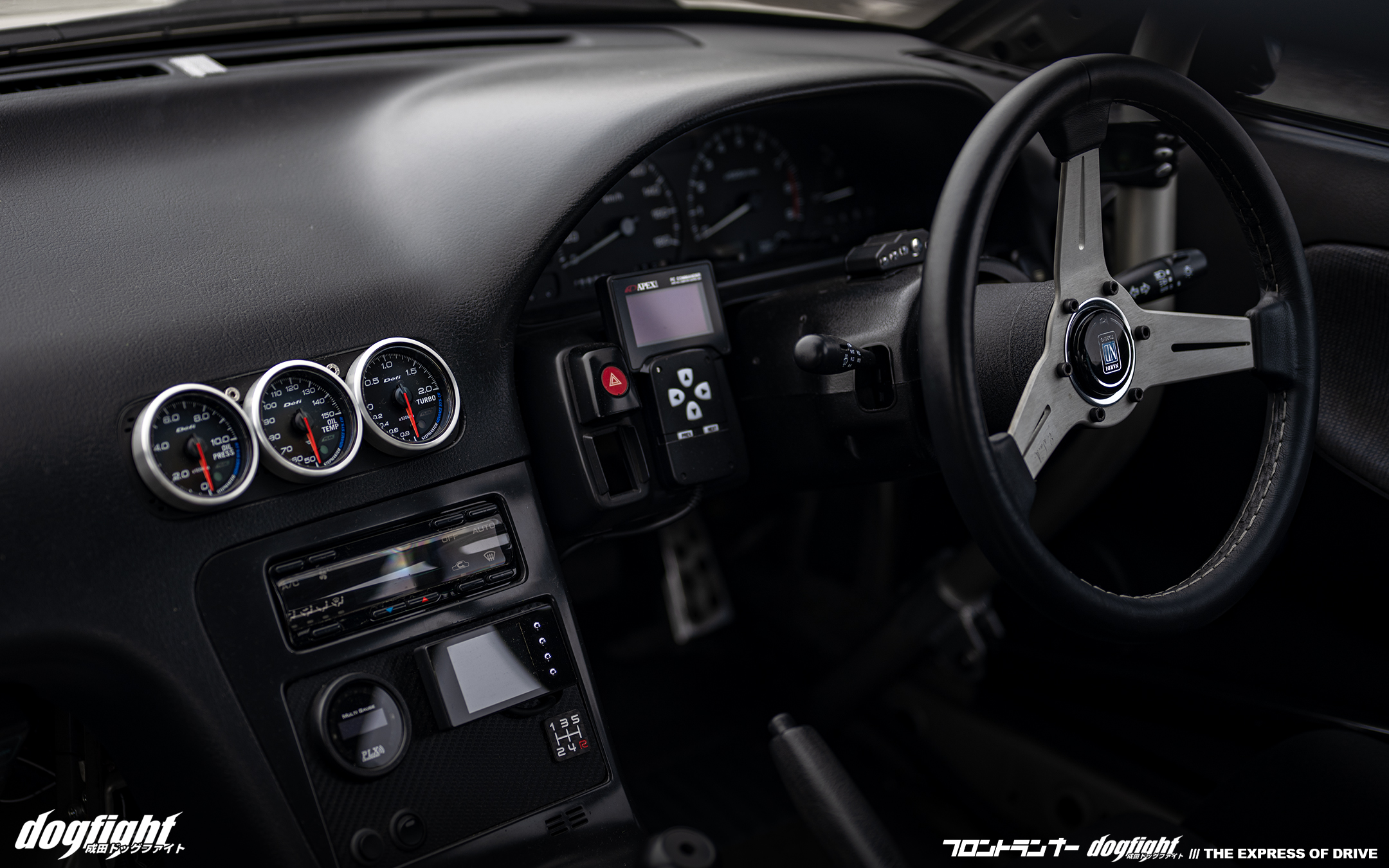 As you opened the lightened door and peer inside the cabin, you’ll be taken aback with how pristine the interior of the Silvia is.  A brand new looking dash and cluster take the stage, and provide ample placement for a set of Defi gauges, a wideband, Apex’i controller, and other various engine controllers.  From the dash back, the interior has been fully stripped to save weight. 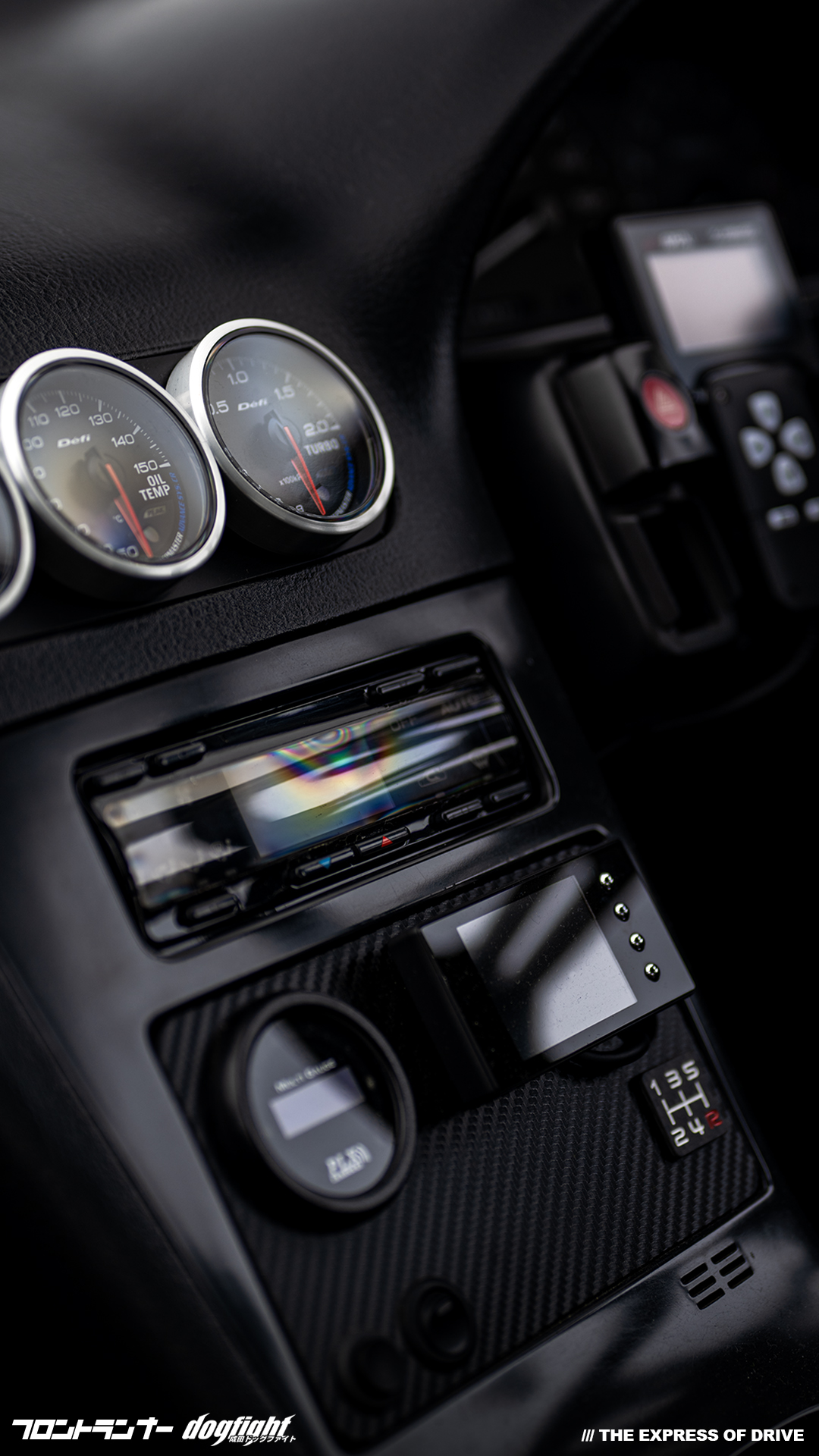 While the air conditioner has been ditched to save weight, the heater remains to help with defrosting functions and to give the driver some comfort in the winter months when Attack season is in full swing.  Okizo has also taken the time to lighten the engine and chassis harness, removing the wiring that is no longer in use. 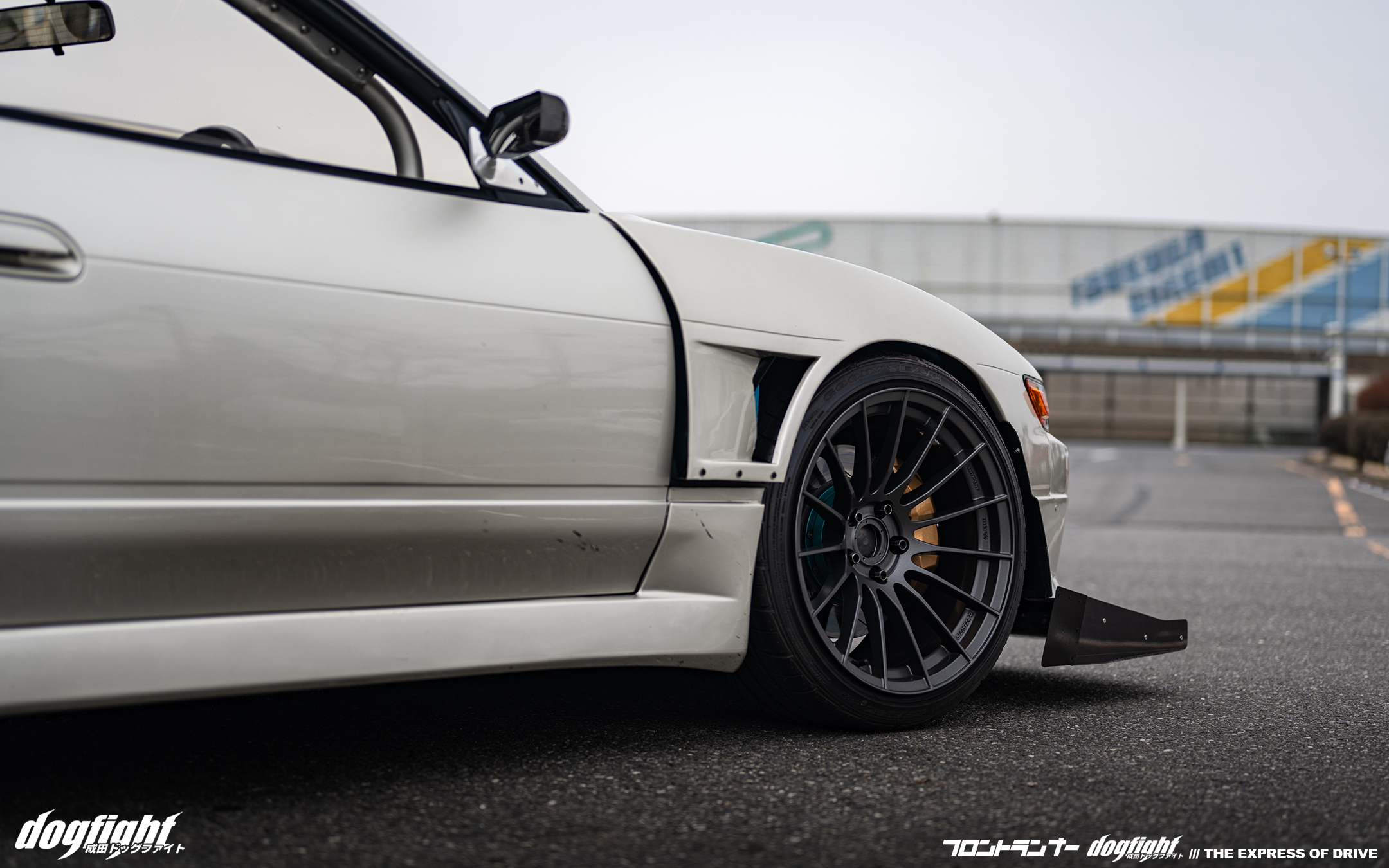 While driving to and from the track, or the grocery store, Okizo uses a set of often slept on wheels; Enkei RS05RR.  Sized at 18×10 +22 at all four corners, the wheels are wrapped in 255 Goodyear Rev Spec tires.  Affordable performance for the street. 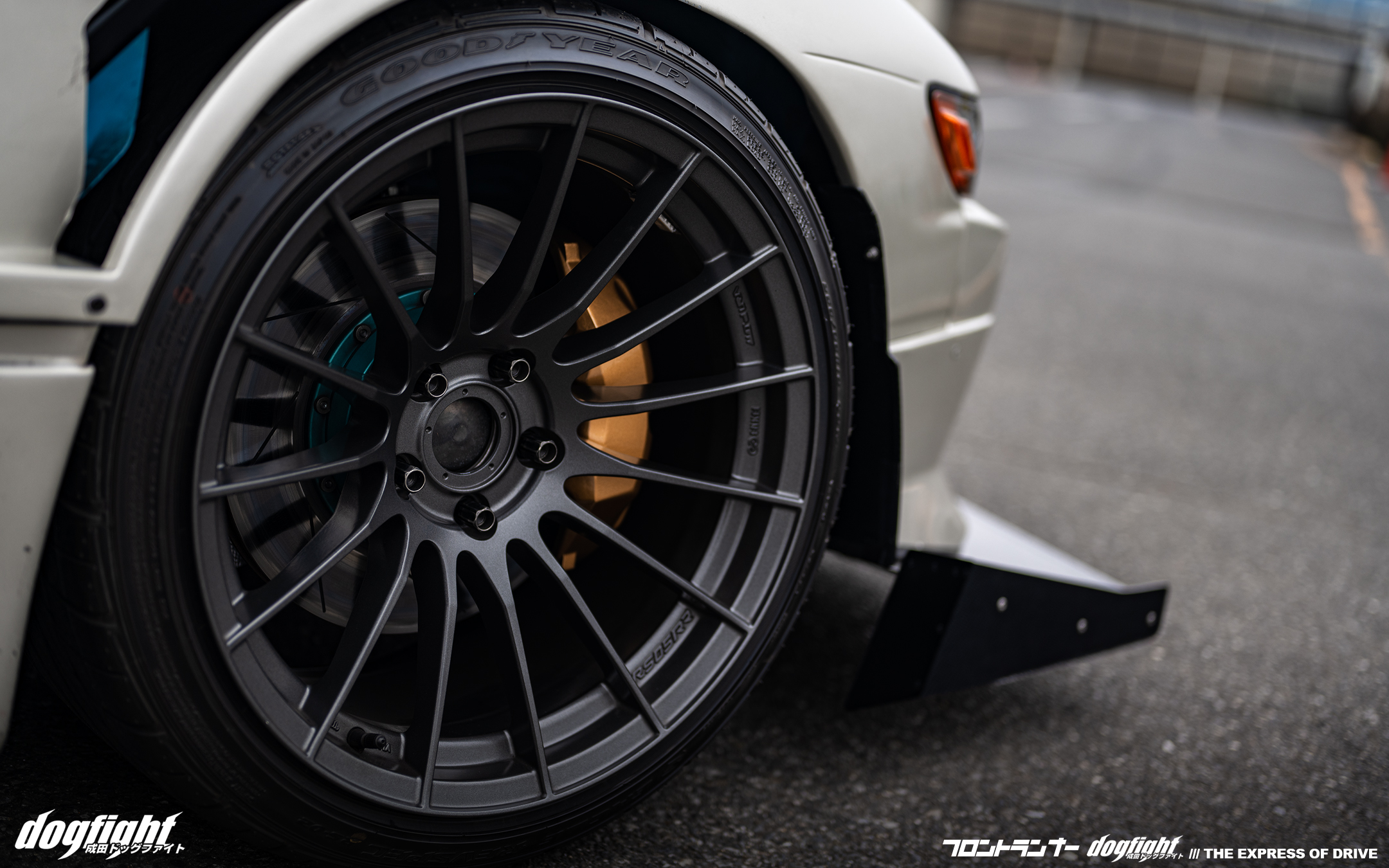 The front brakes are borrowed from a UCF30, the big bodied Celsior from Toyota.  Upgraded two-piece rotors help shed some of the weight from the OEM brakes and give a bit more stopping stamina to the front end.  The rear has been fitted with a caliper from a R34 GTR, made by Brembo.  Both front and rear brakes use ZONE brake pads of varying compound depending on the track. 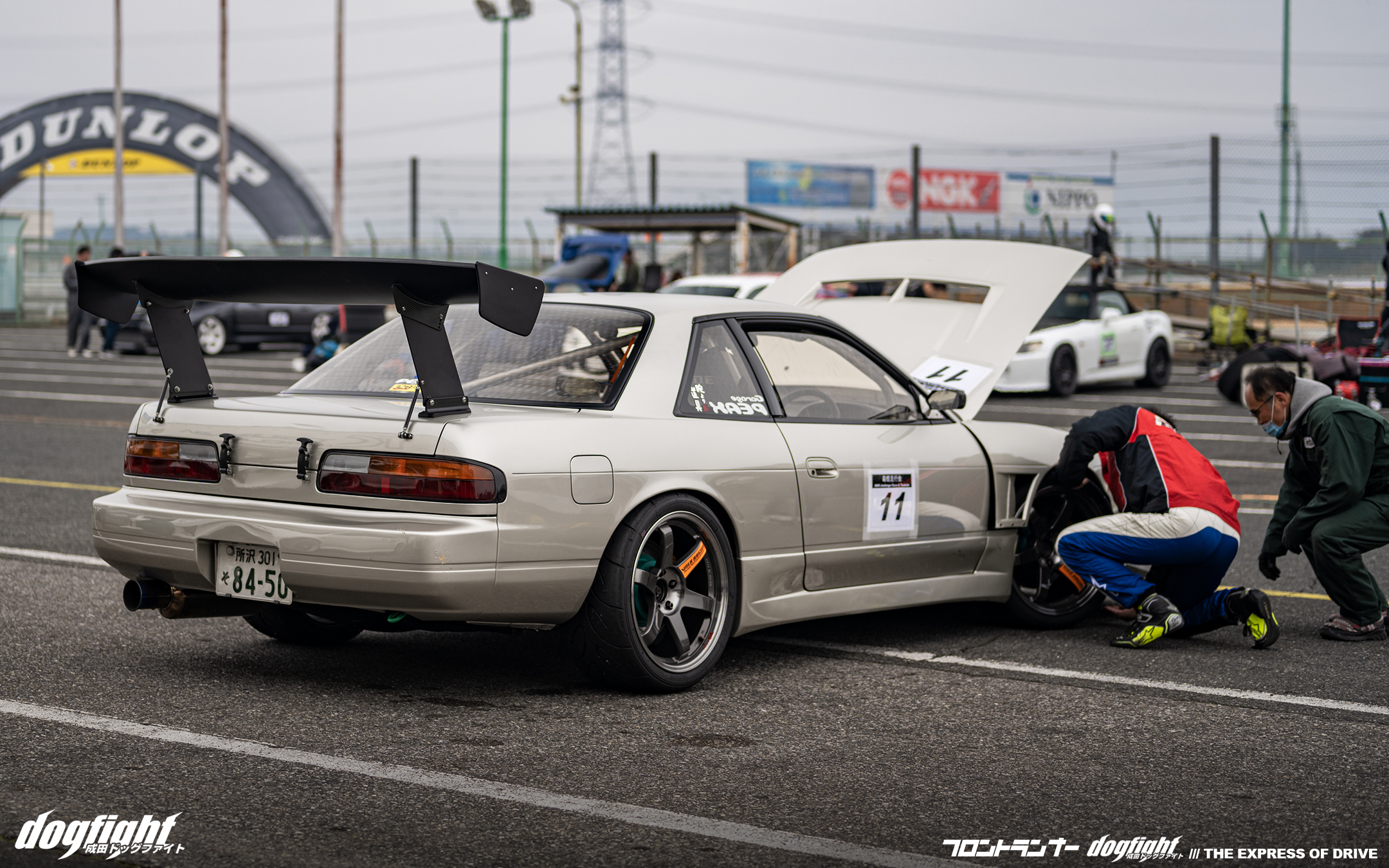 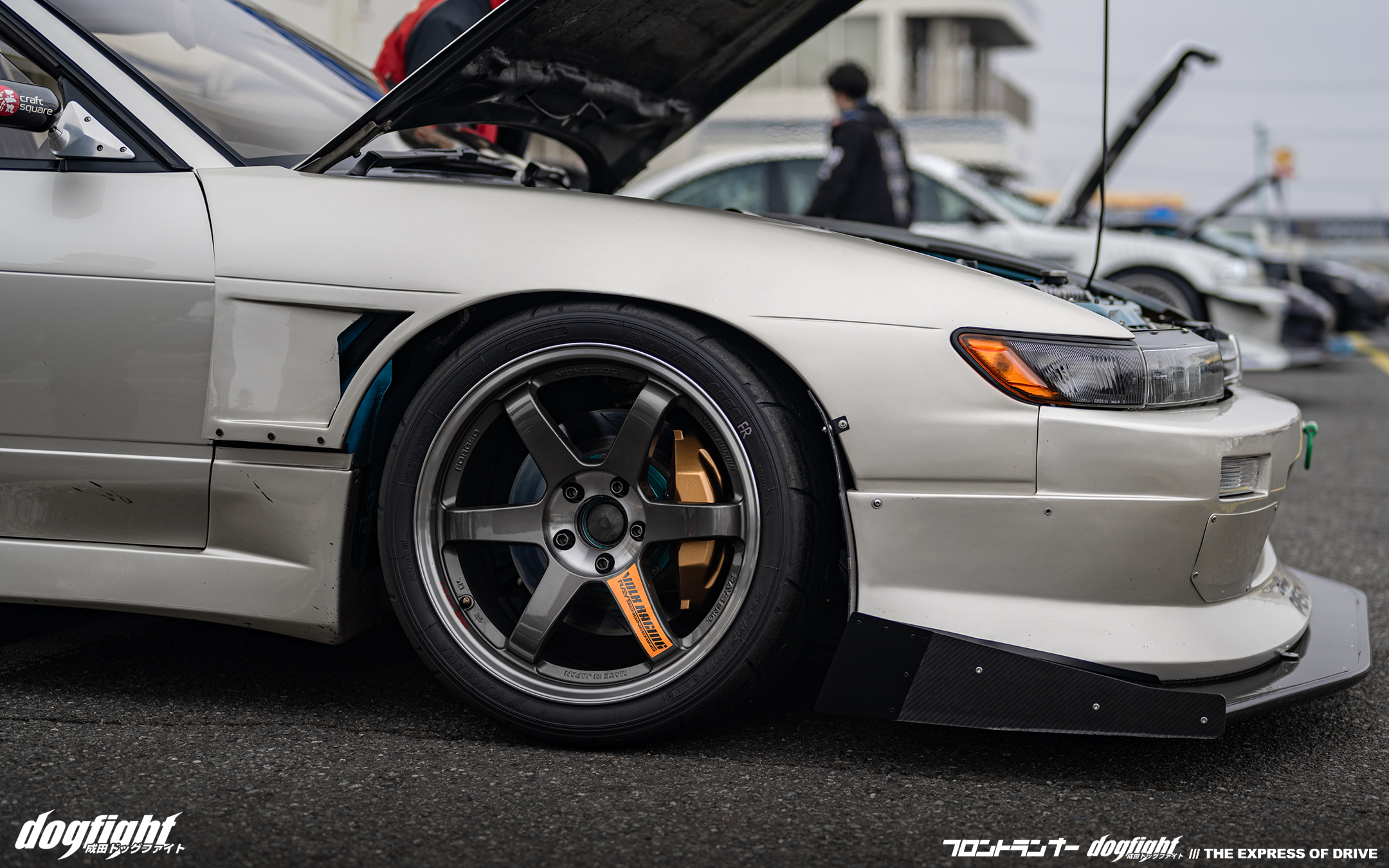 Once at the track, the wheels are swapped with a set of 18×9.5j +22 TE37SL’s wrapped in 265/35 Advan A050.  The 9.5j width provides the 265 series tire the perfect amount of sidewall stretch for the track and gives an almost square appearance.  An ideal look for the car. 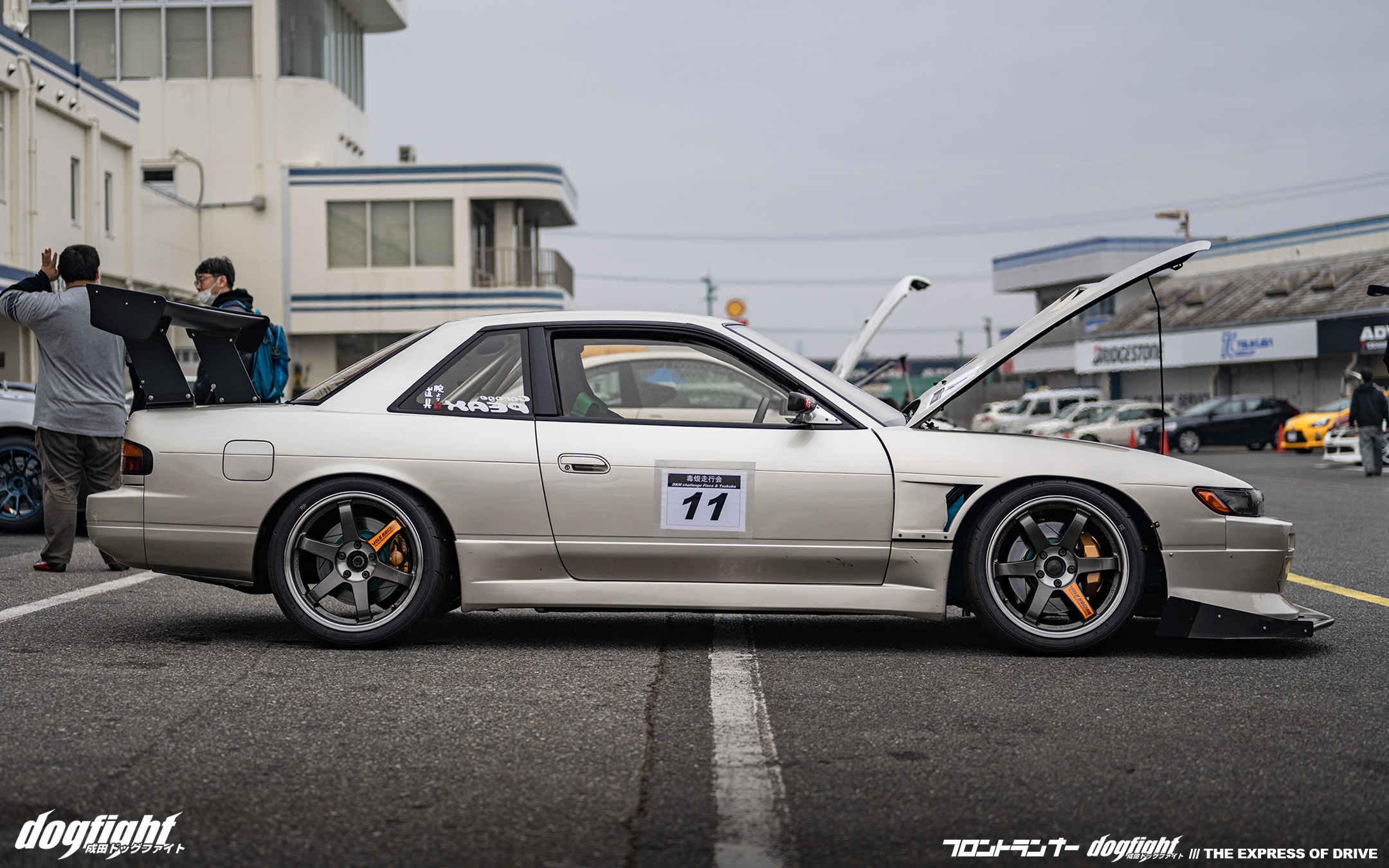 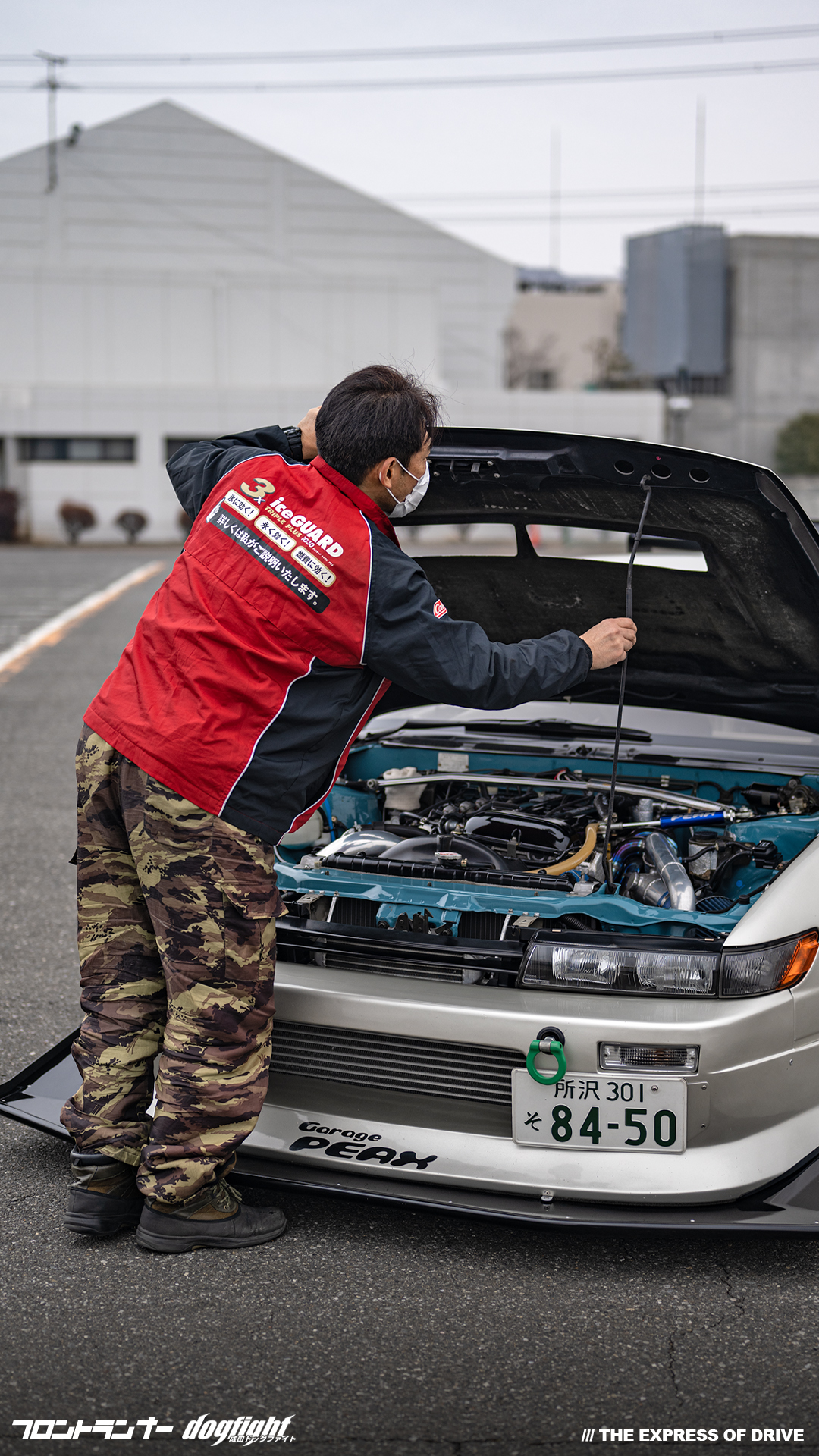 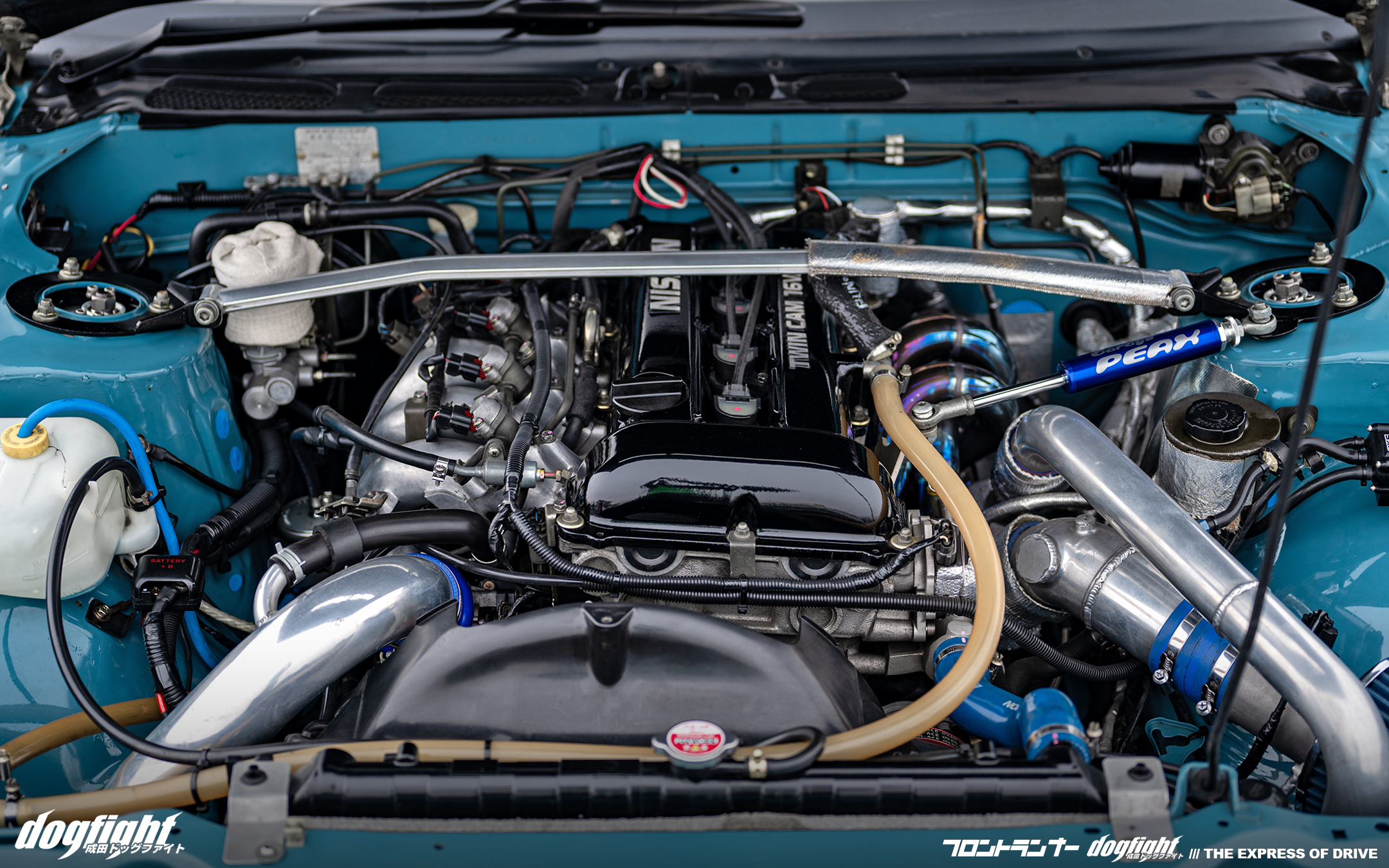 Over the years some small adjustments have been made to the SR20DET, and while the bottom end remains stock, the head has been modified with a set of Tomei Procam and Tomei head gasket.  The main power is created by an upgraded HKS GTIIIRS (A/R60) turbine paired to an Altrak S4 equal length manifold.  Tuned by YMS Gyoda, the boost is set at about 1 bar, which makes for a healthy amount of useable power.

Nismo 740cc injectors and a Nismo fuel pump are used for a combination of OE reliability and ample fuel provisions.  Cooling is handled by the larger S14 radiator, along with a Trust intercooler and ARC oil cooler set inside the front grill. 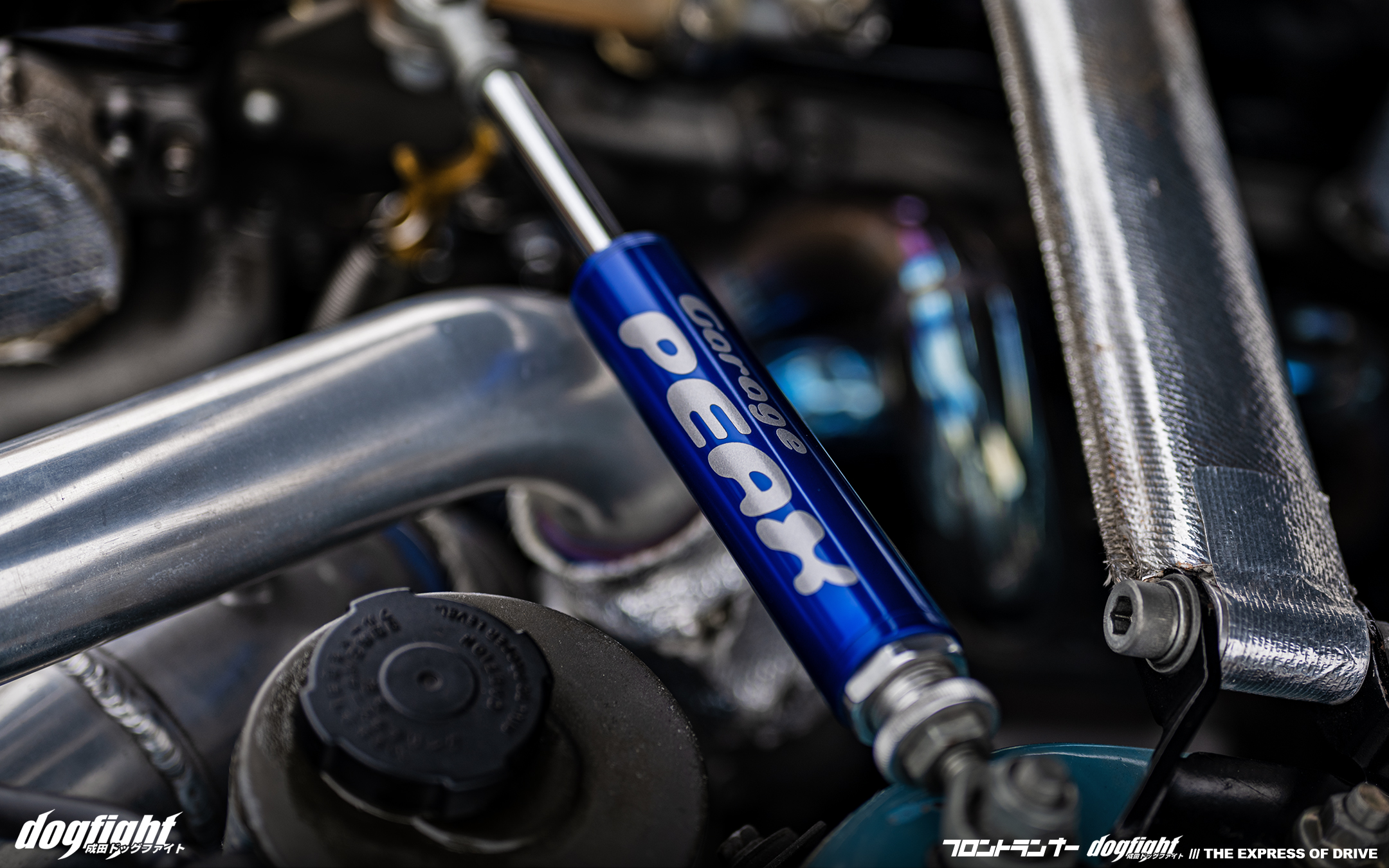 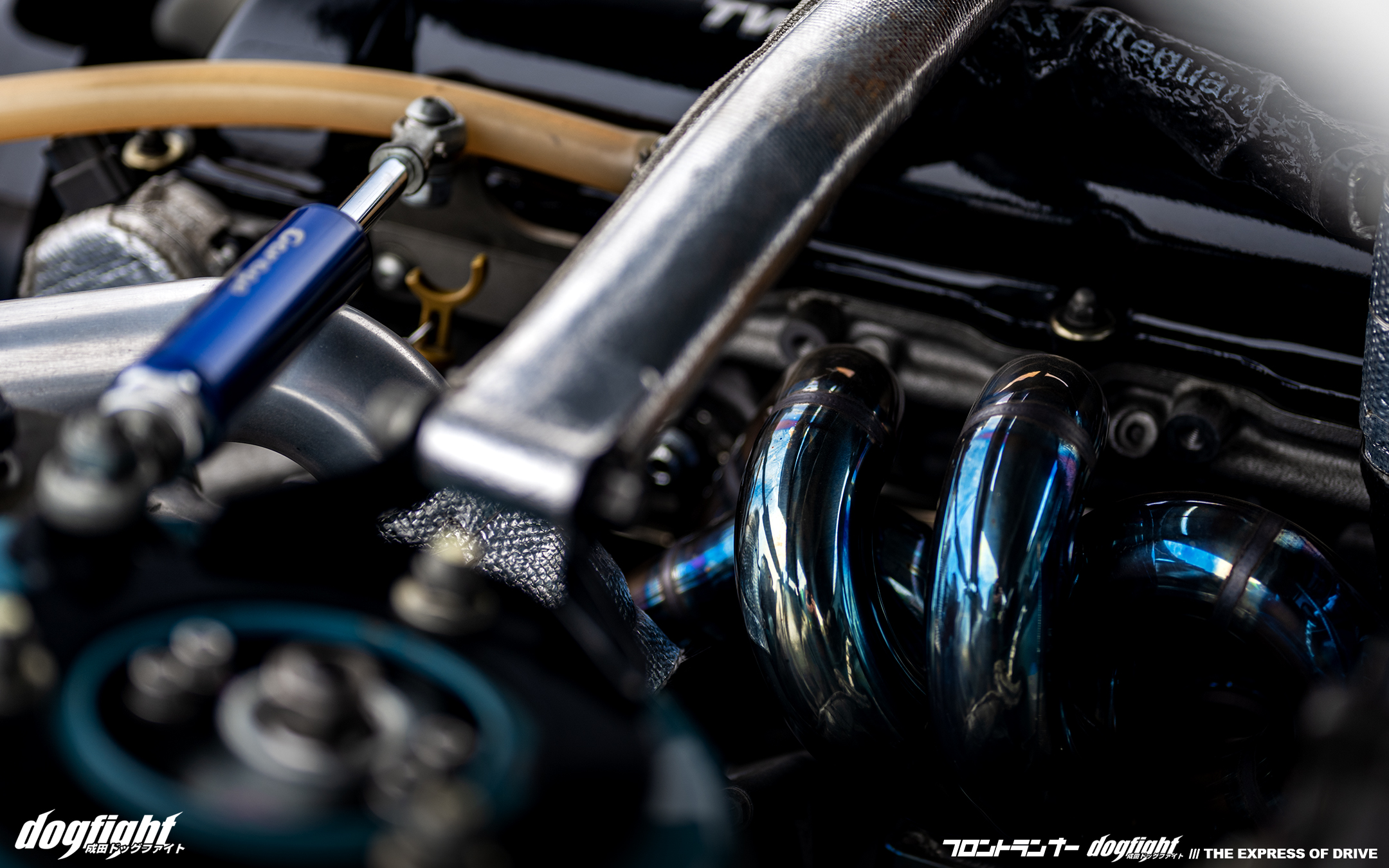 A close look at the beautiful Altrak manifold.  Such a great heat-created color pallet on the tubing. 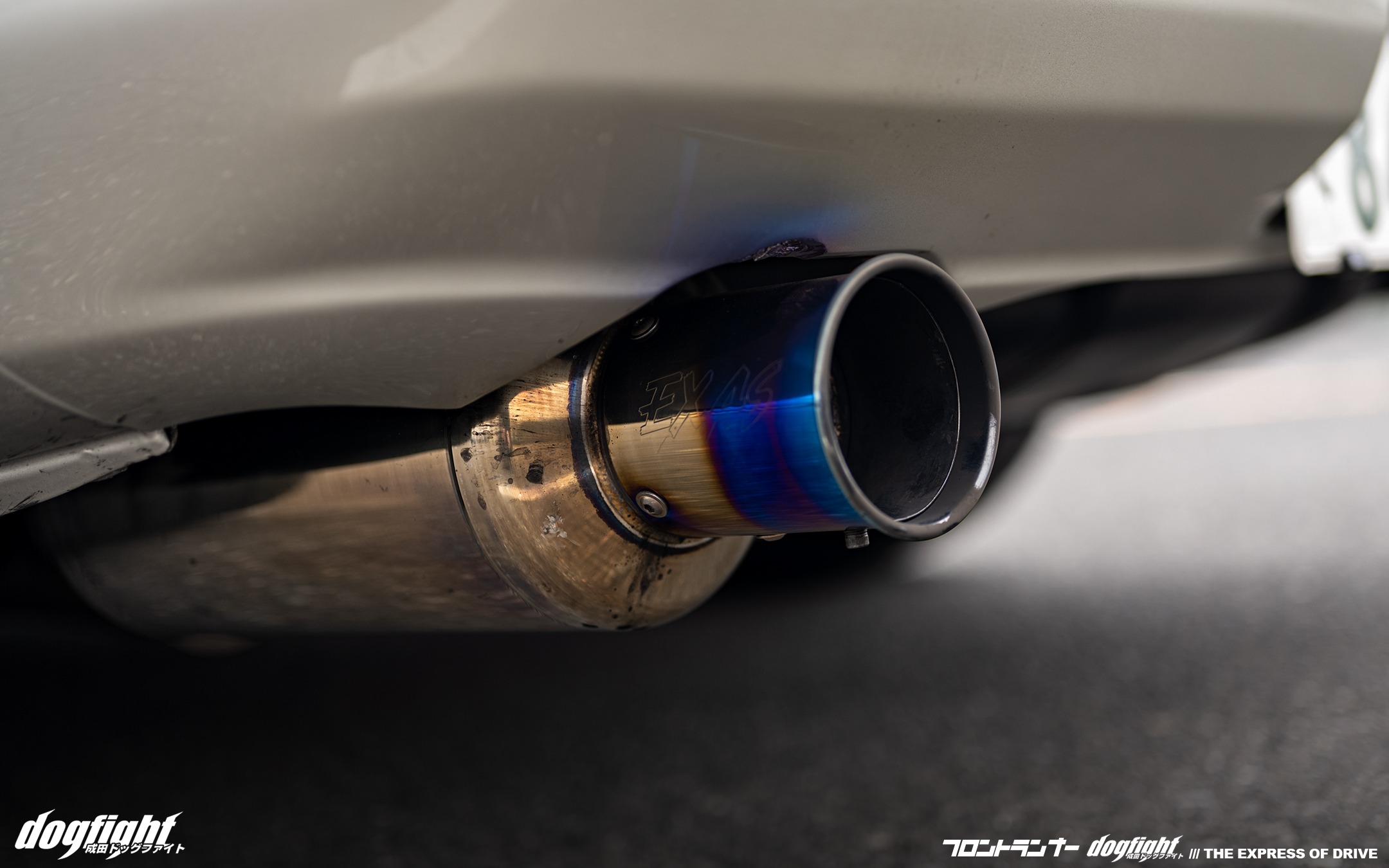 The transmission is equipped with a Nismo Sports clutch and an OS Giken 3rd gear.  The differential has been swapped with a 1.5 way unit from Nismo, again taking advantage of OE quality and reliability. 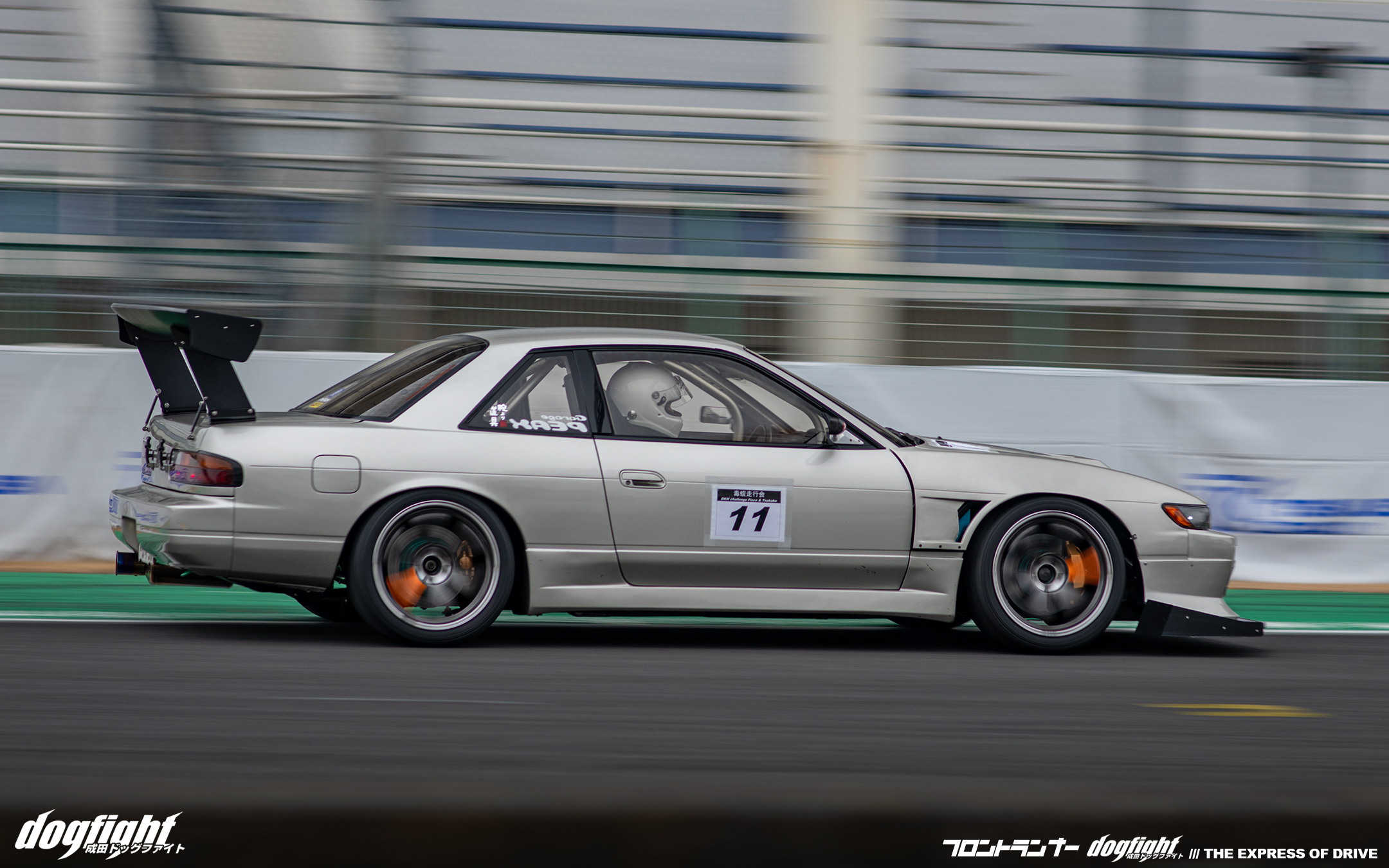 Over the years Okizo has successfully driven the car faster and faster.  At Tsukuba, for example, the pair has clocked a personal best time of 58’433  seconds at TC2000 on Advan A050GS tires.  See below for a table of times based on tire for Tsukuba and Fuji Speedway short course, two circuits he frequents, as well as Nikko (often used as a practice track for time attack drivers). 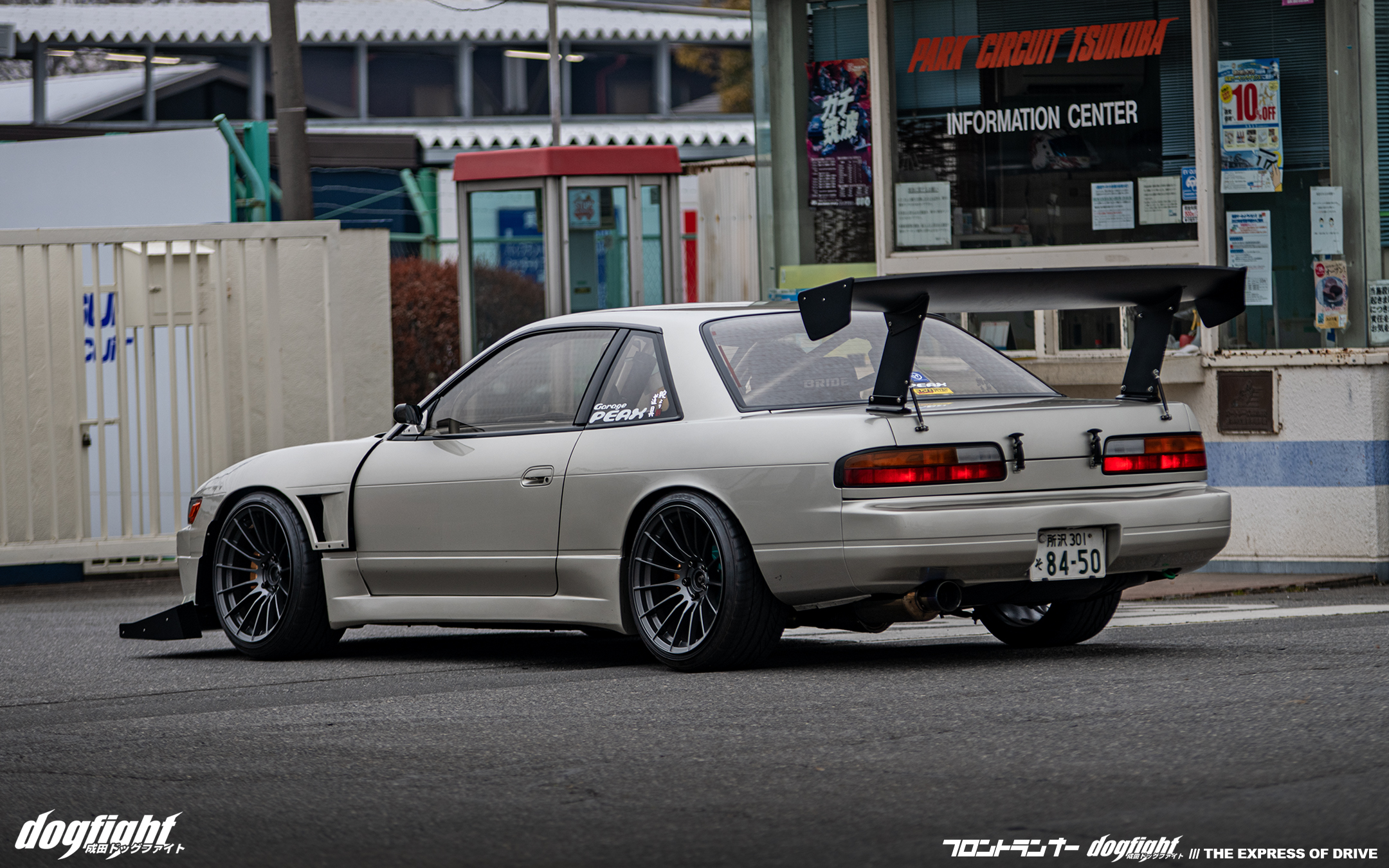 Always a pleasure getting to catch up with drivers after so many years, and to see how the builds have progressed.  I’m happy to see that, in this case, both the car and driver have only gotten better with time. 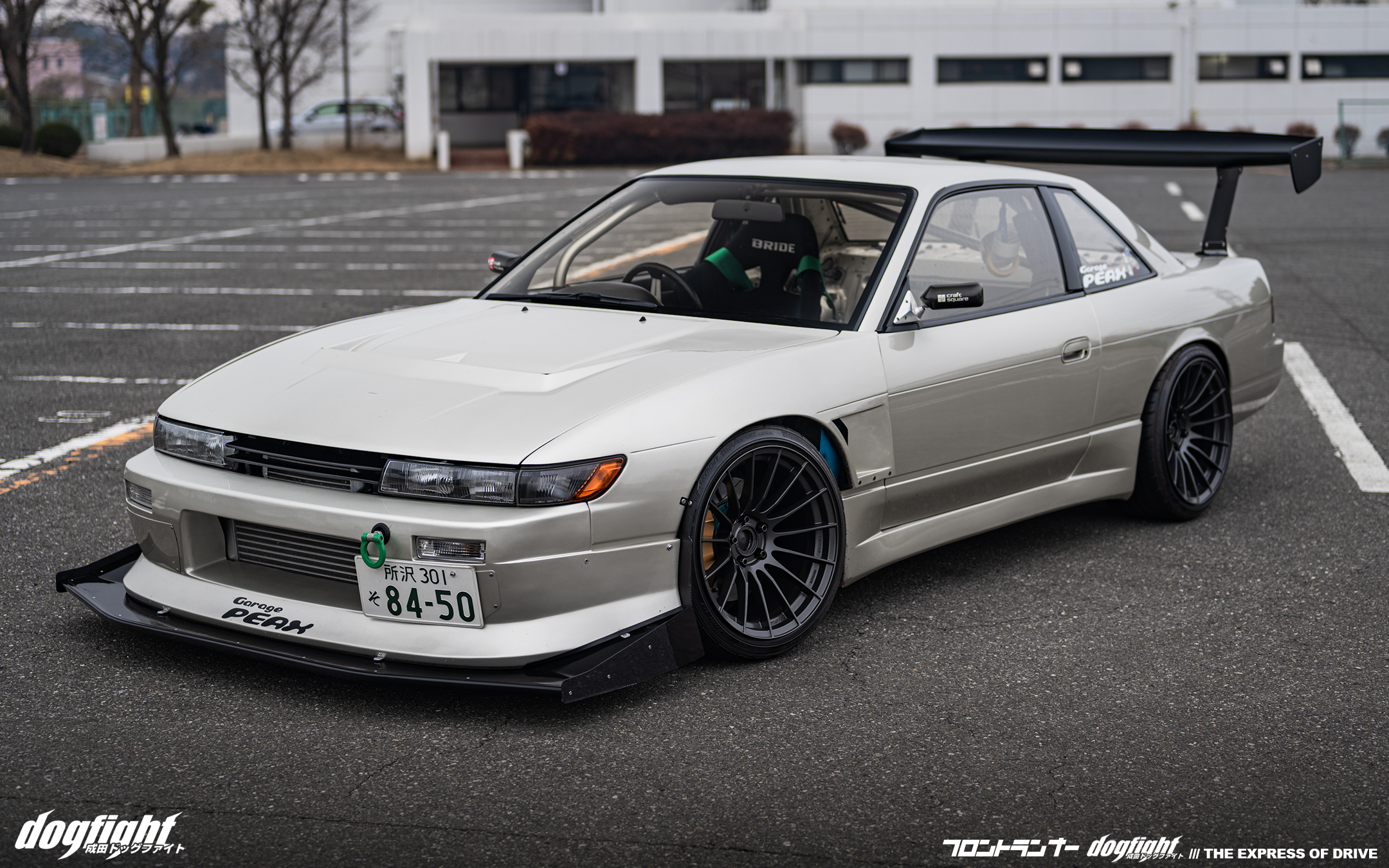 Hopefully we can meet again much sooner than 7 years from now! 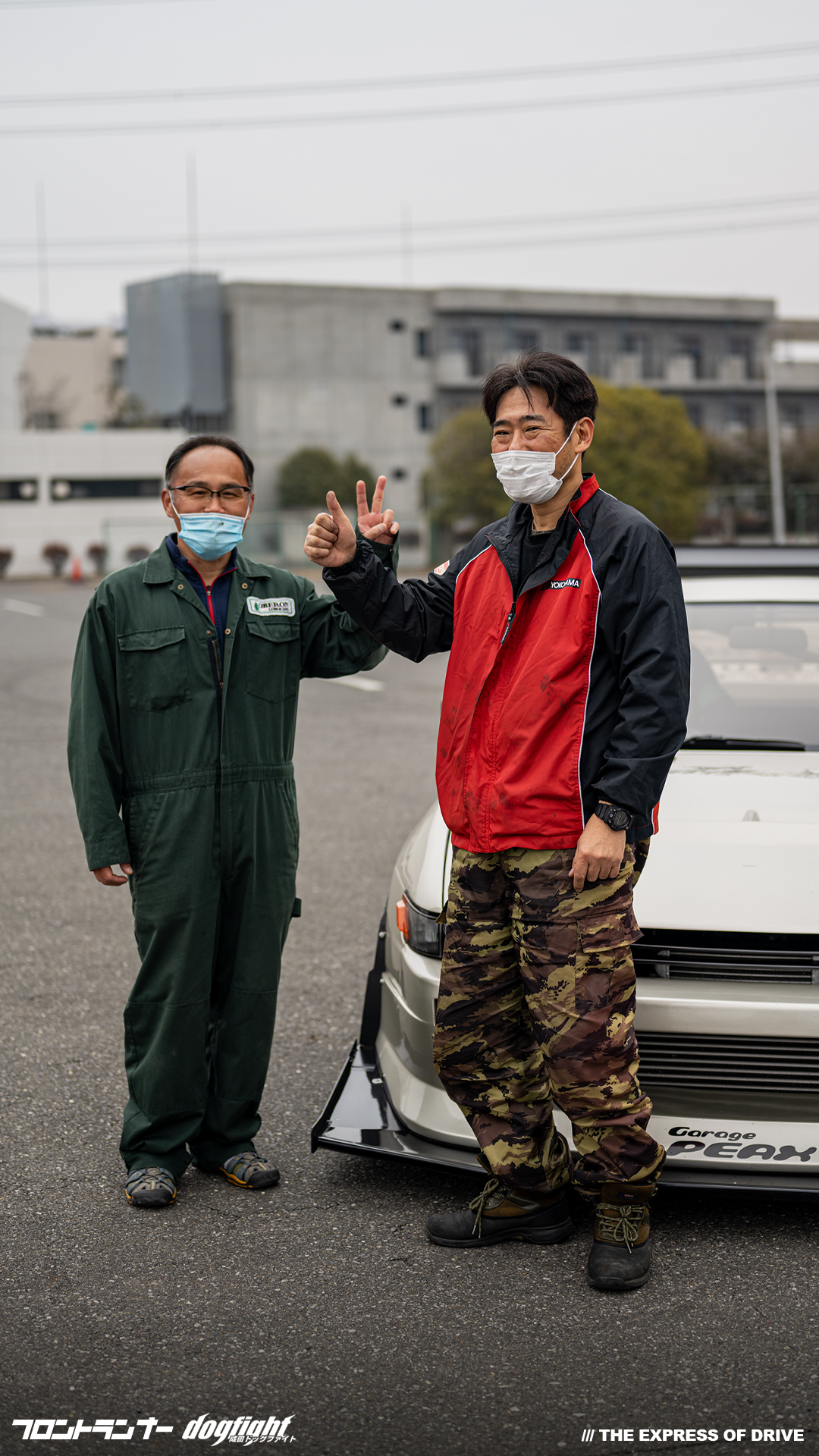