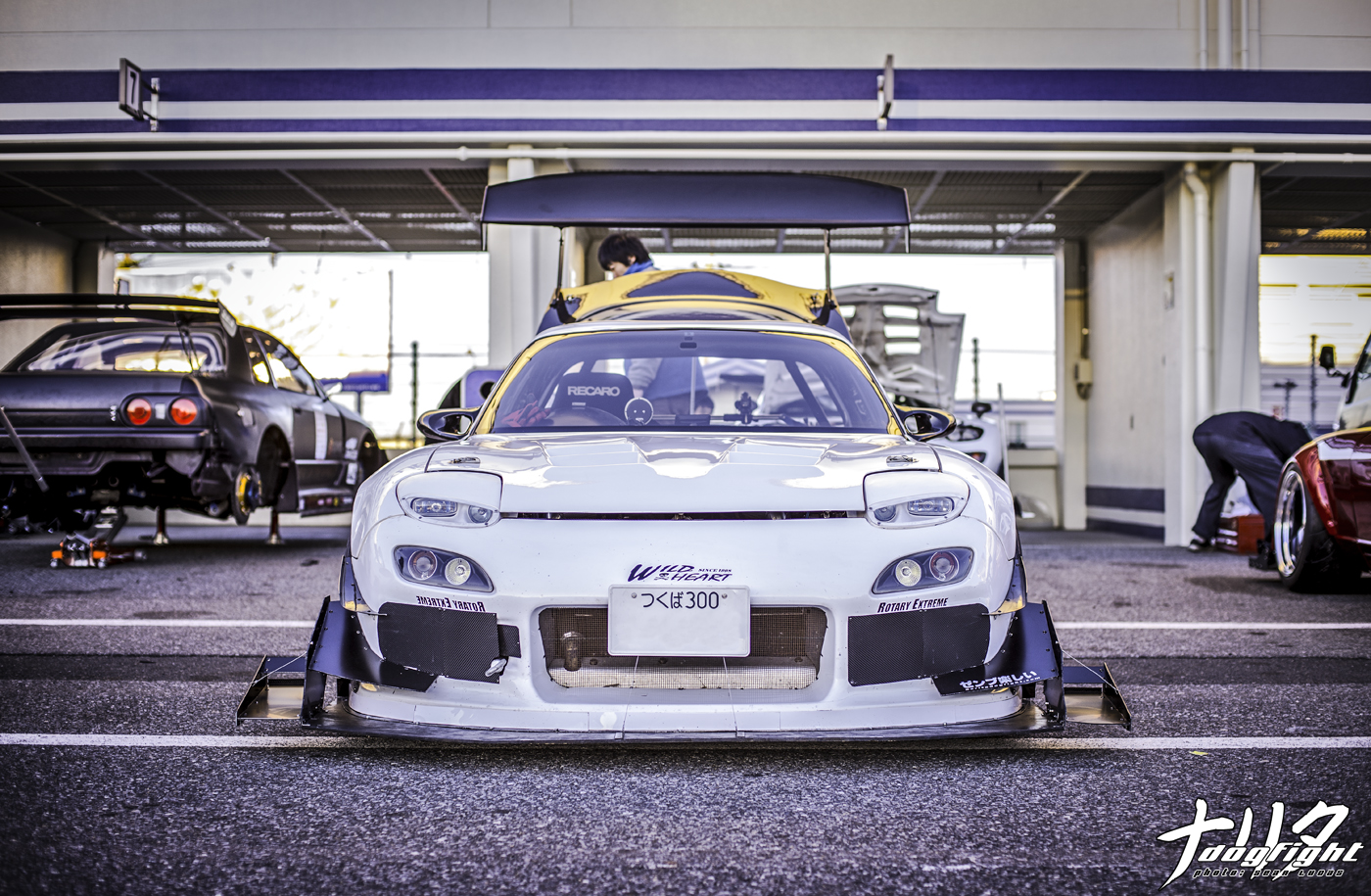 As I sit in front of my gate at the Dallas-Fort Worth airport, with the hopes (although very little) of catching an earlier flight back to California, my mind can’t help but wander back towards days that I enjoy more than those of which I spend inside the depths of US airports; which I relate now more or less to that of a colony of bees.  Filled to the brim with people going about their every which way, connecting to cities across the expanse of the Earth, each with a unique task to complete (varying in importance).  The days on my mind? Those of which are spent in Japan, at the circuits which I’ve grown all too comfortable being at…

Time spent with friends like Toshio ‘Tommy’ Tomizawa, who happens to own the FD you see here…one we’ve actually featured in the past.  However, the developments that can happen to a chassis in a year can be somewhat involved.  Tommy, unlike myself, frequents Tsukuba quite often.  Albeit many more times than I, I can’t help but think we feel we share the same sentiment while we’re there.  As I walked past his car in the morning of the Evome event in which I was at, Tommy’s uncommonly tall stature caught my eye as he was offloading the car. 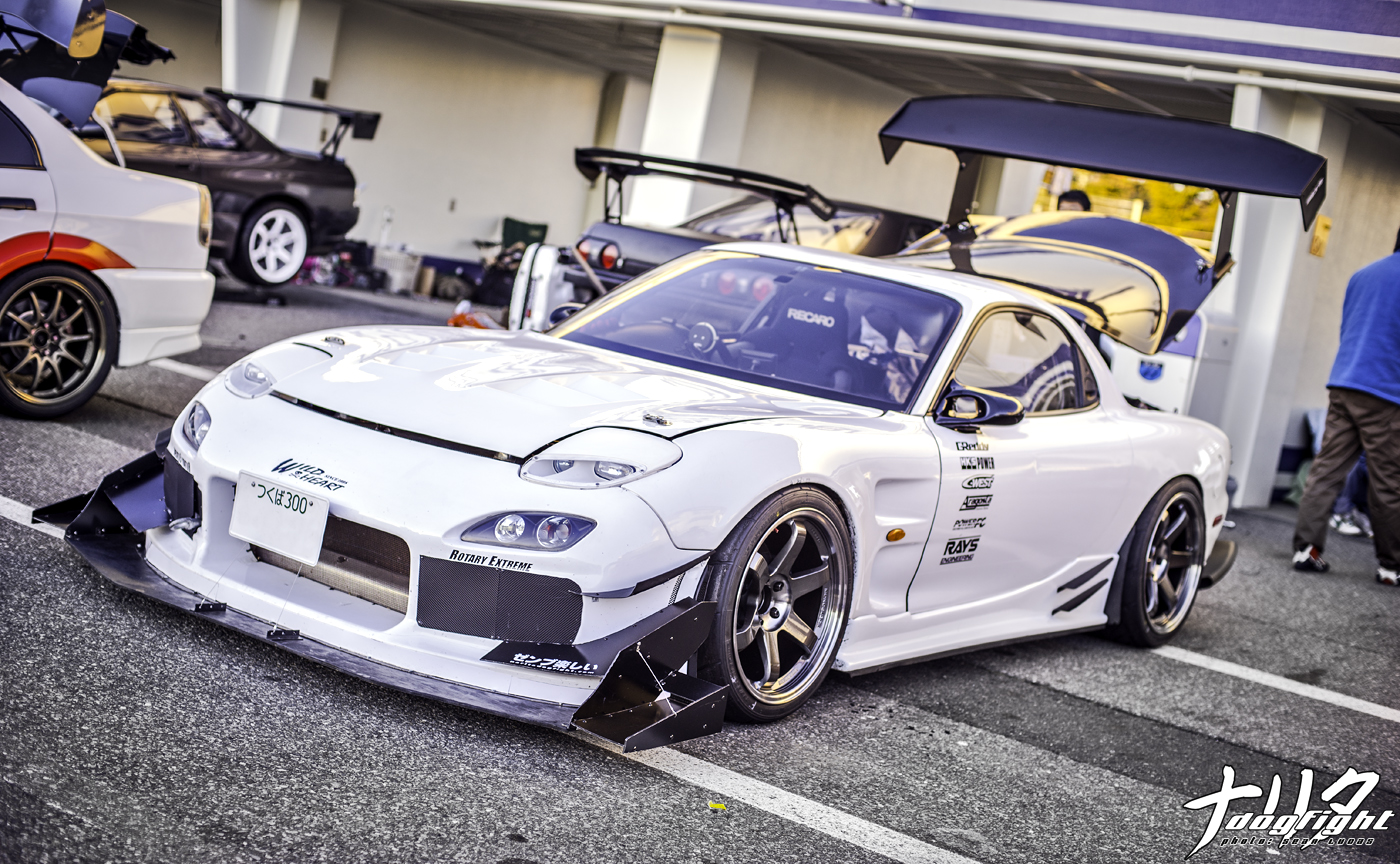 We said our hellos and お元気ですか’s, but the topic of conversation quickly moved towards the car.  While it was still sitting on the set of TE37’s it’s usually seen on, it was clear the front end aero package was changed up for 2015. 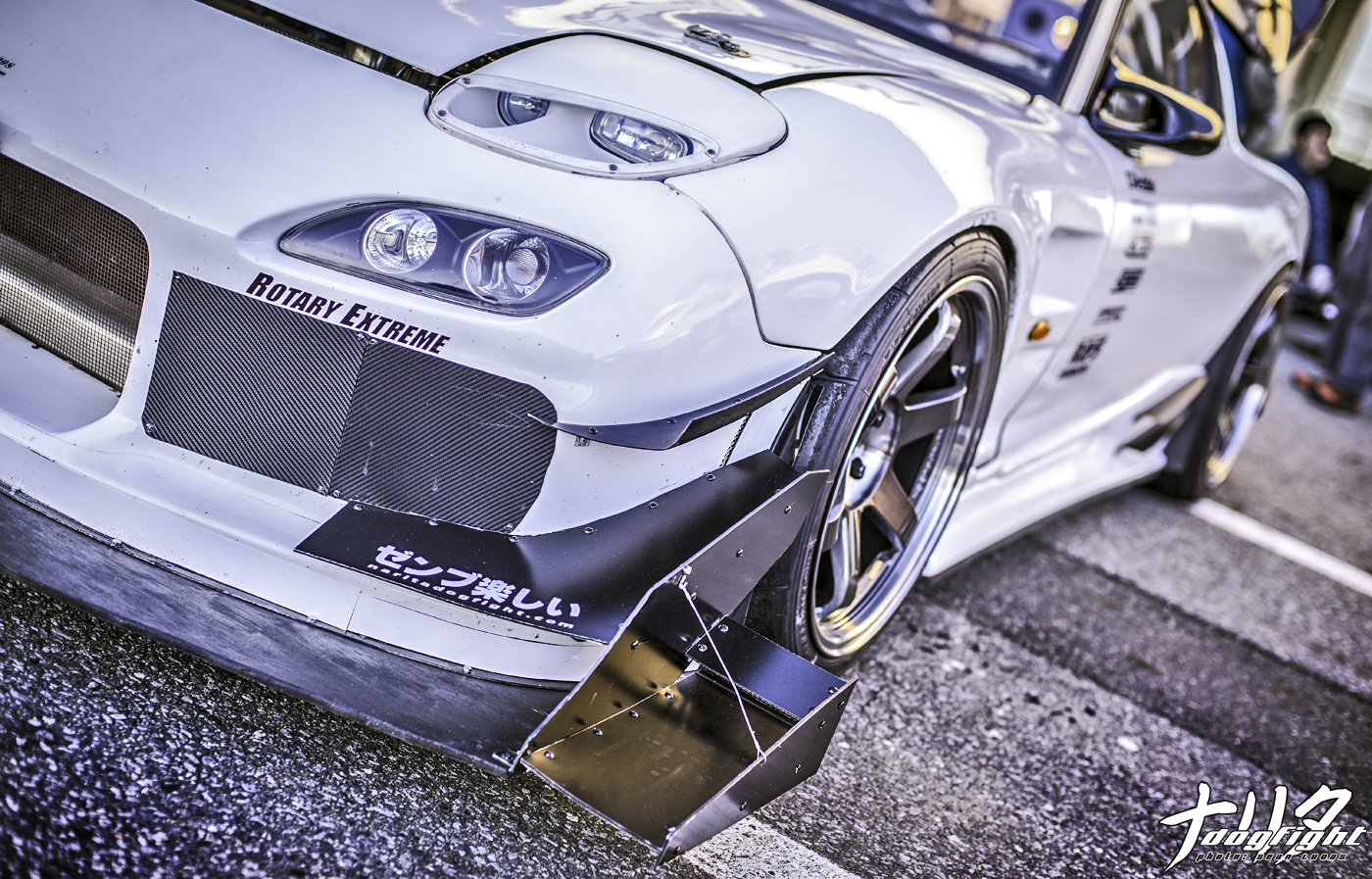 A new canard and splitter setup, put together at Wild Heart, now resided on the C-West front bumper, whose front vents have been covered up by plates of carbon.  The ‘Everything’s Fun’ decal on the new canard sums up Tommy’s breezy, carefree attitude. 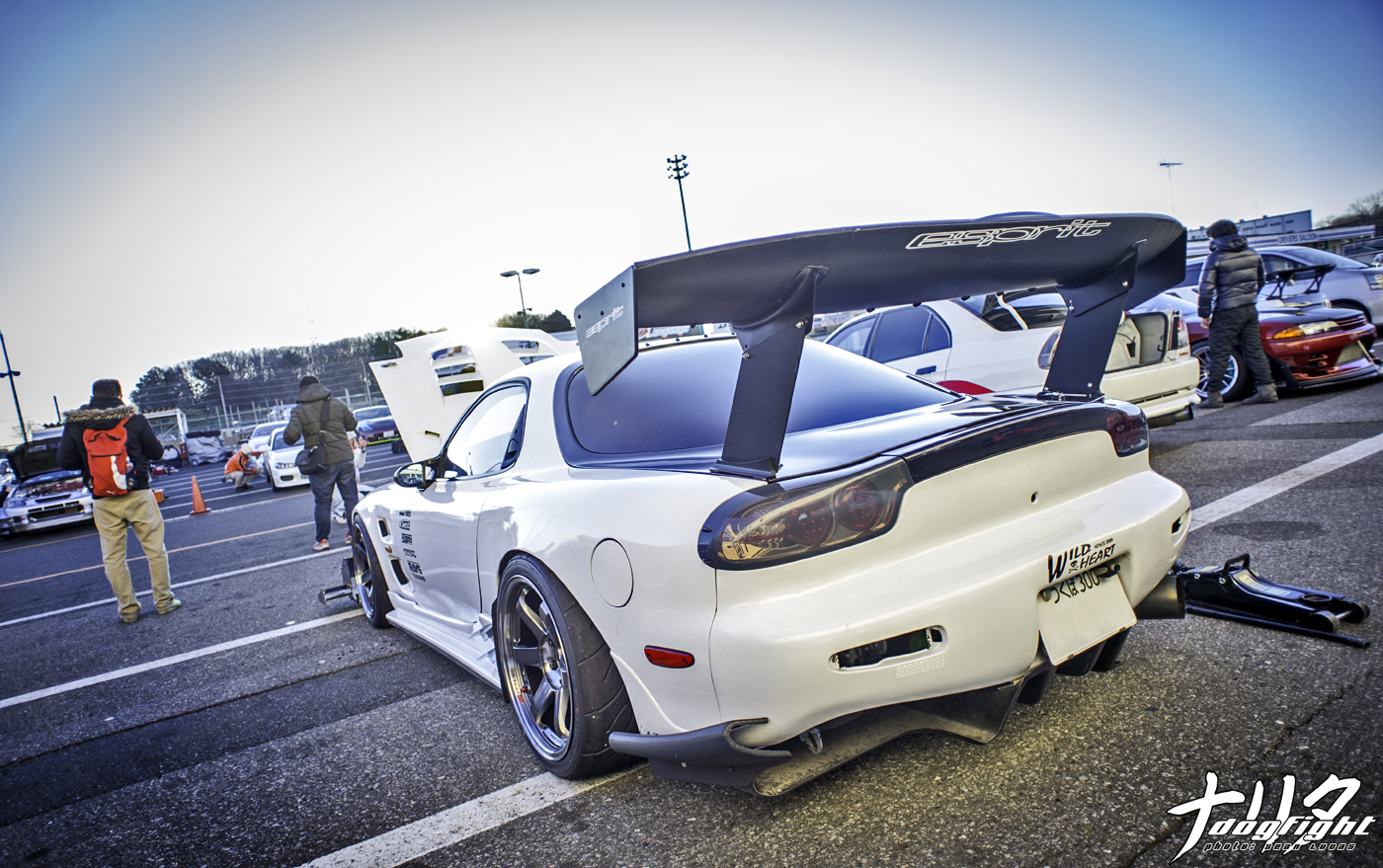 The massive Esprit GT Wing that tops the trunk, which now rocks a taller pair of stands, in conjunction with the rear diffuser helps the FD stay stable throughout the corners of TC2000. 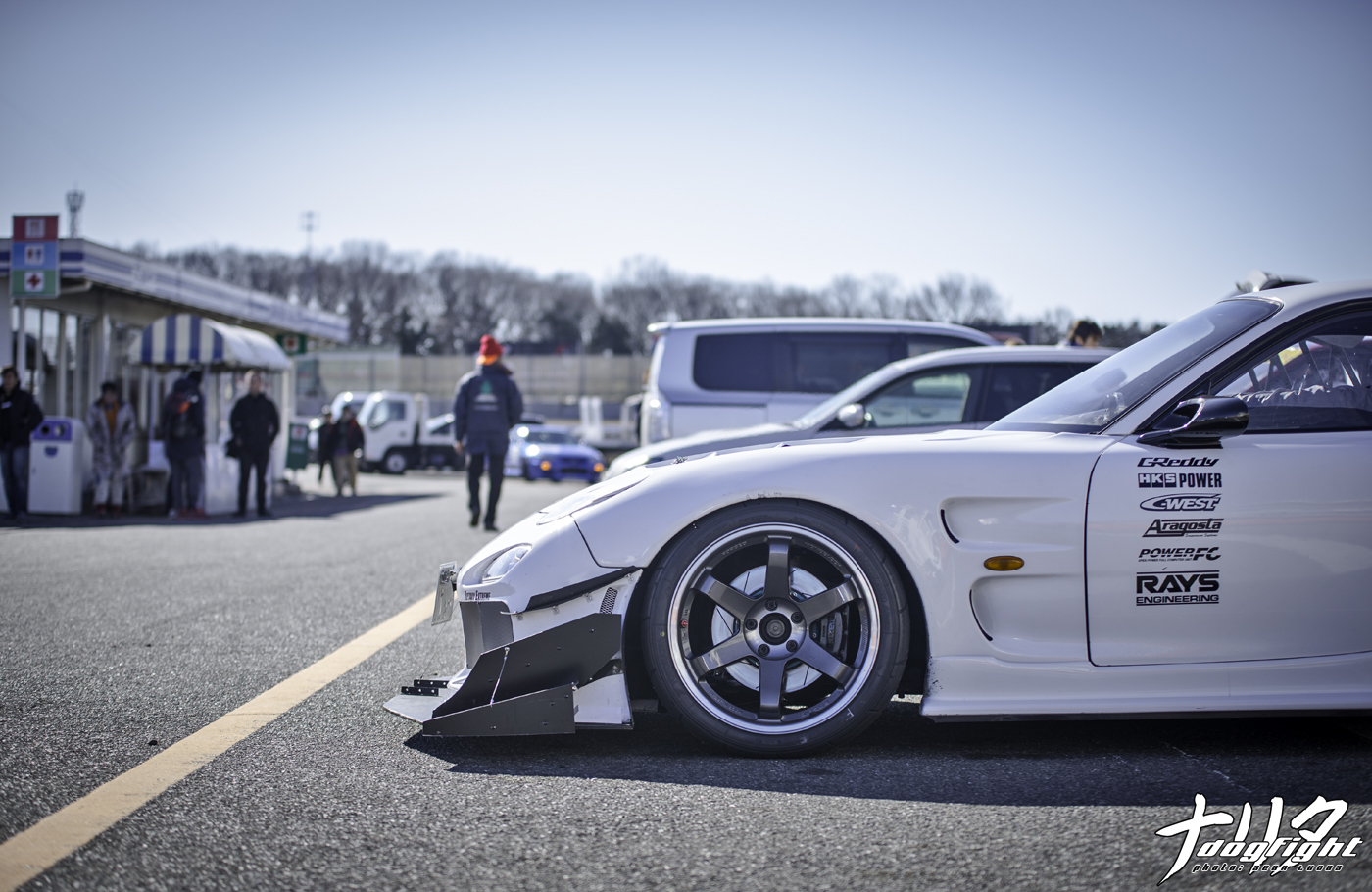 The new front profile looks great as the Advan A050’s are hugged by the fenders courtesy of the custom spec Aragosta coilovers. 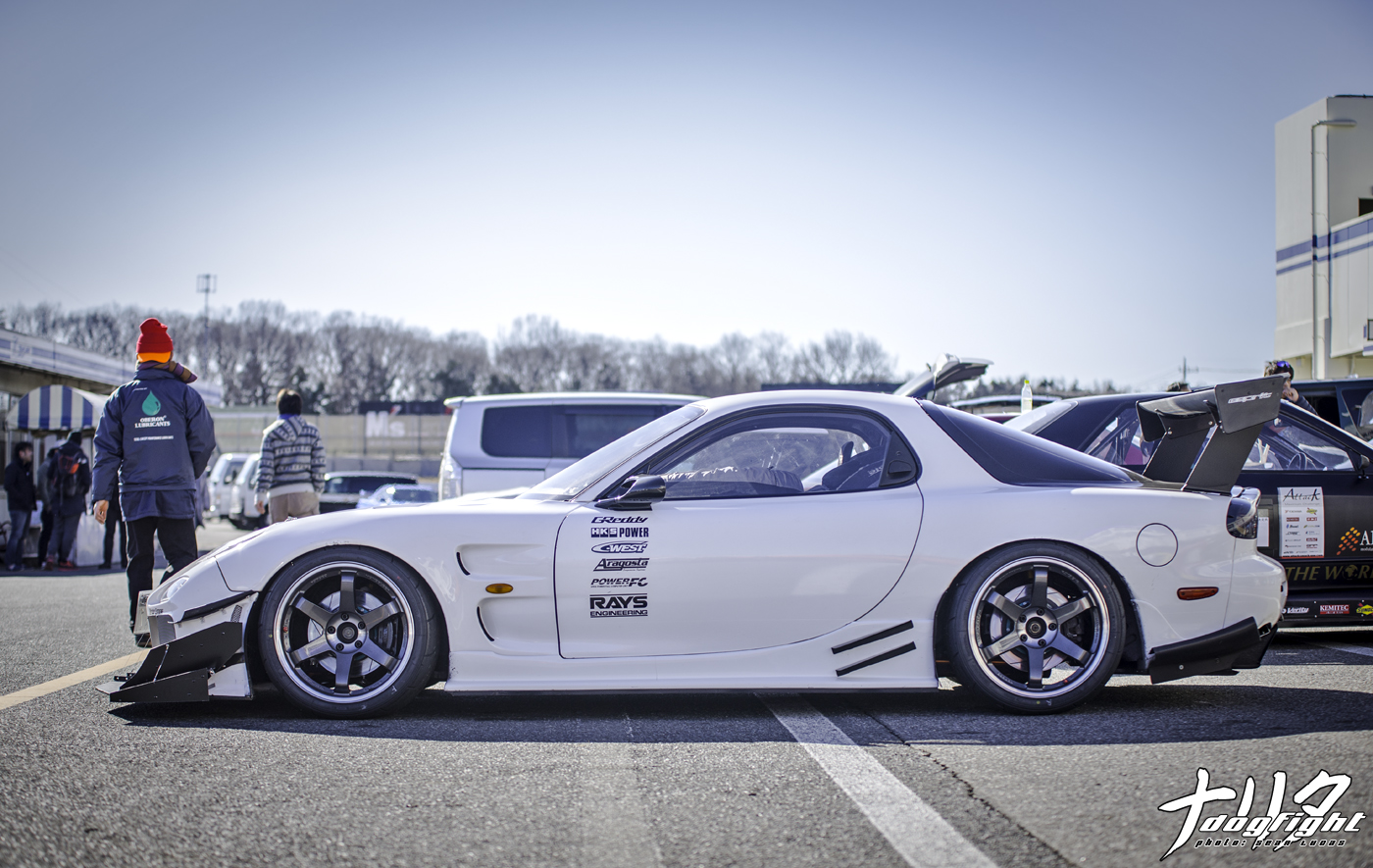 Glad he didn’t switch out the side canards – it’s a simple addition, but I like the way it adds to the overall appearance. 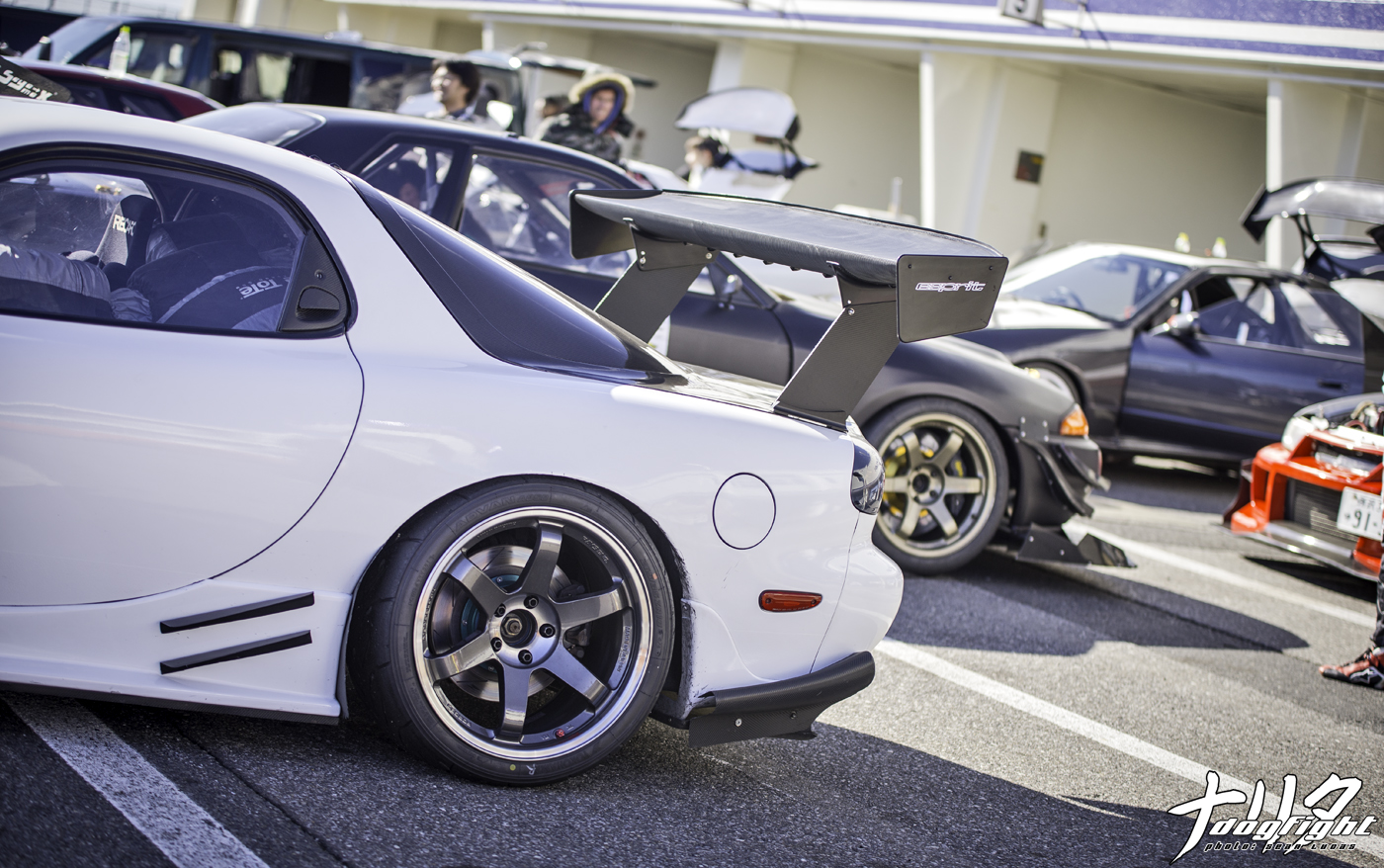 It’s the little details like that that make Tommy’s car stand out amongst the paddock of Evome. 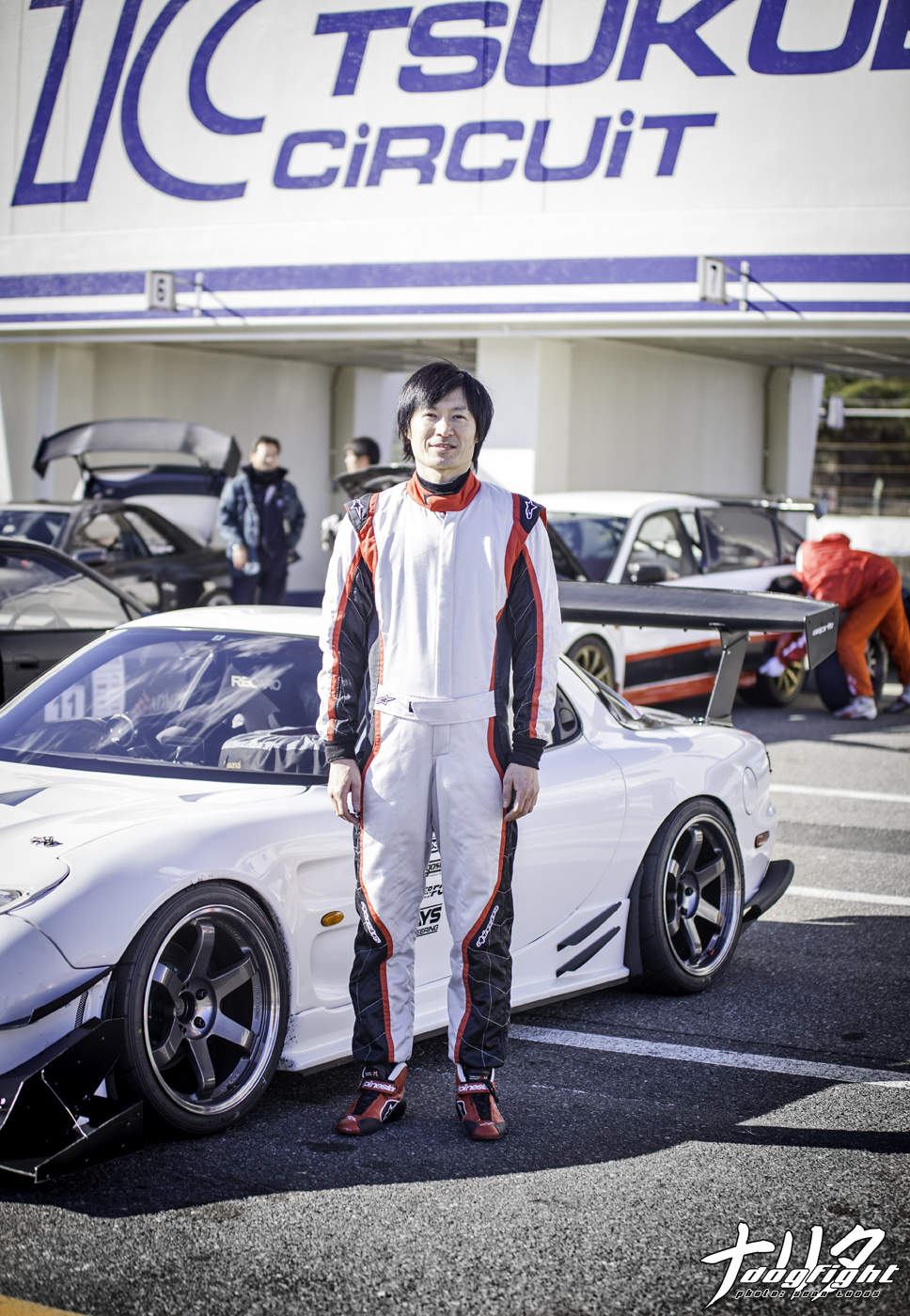 After his stint on track, in which he topped his personal best with a 58.335, he kindly posed for a quick shot in front of his car; after which he drove home (admittedly, not far away – he lives in Tsukuba actually). 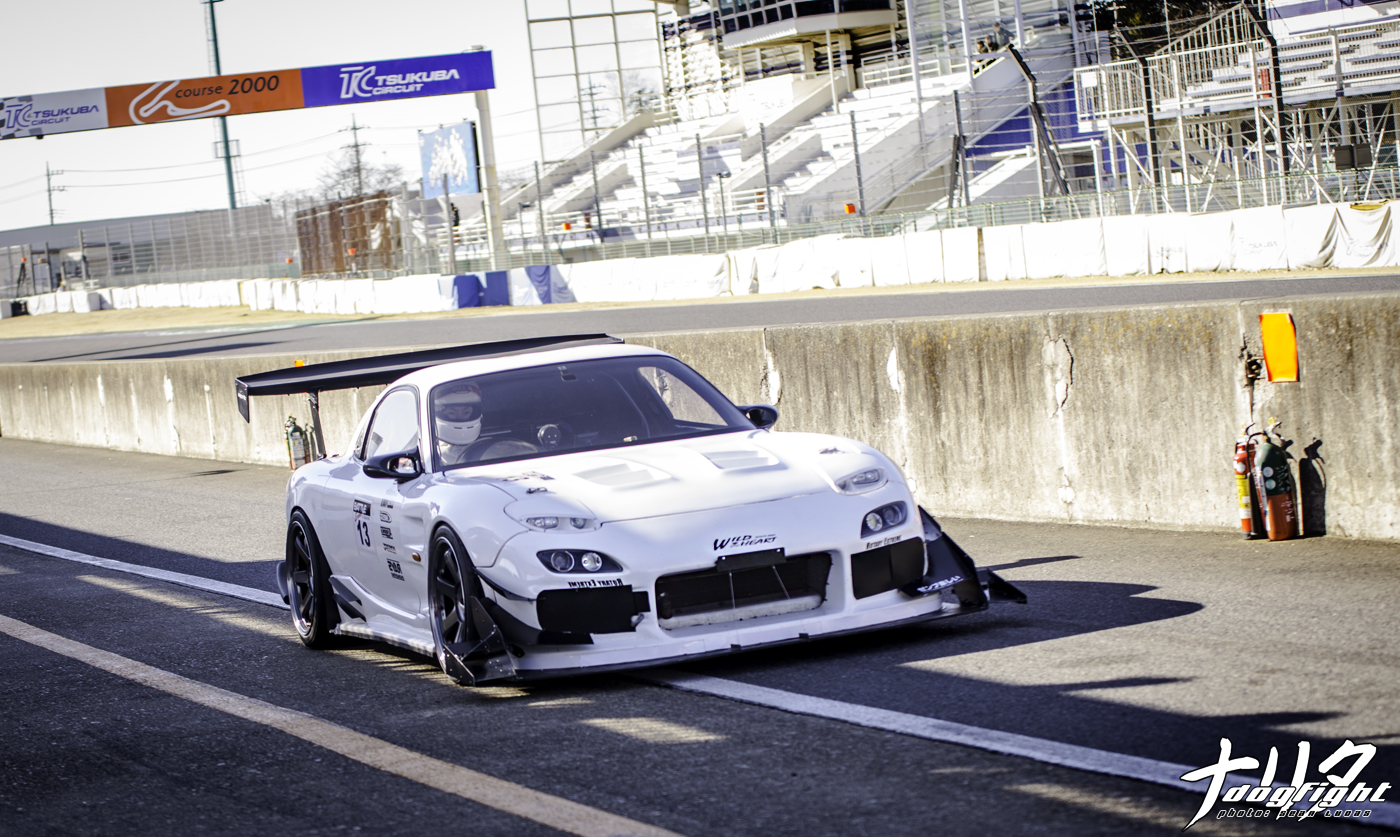 Out on track though, his jovial facade is dropped and it’s nothing but business on circuit.  Averaging 126 kph around Tsukuba’s TC2000, there’s no room for error. 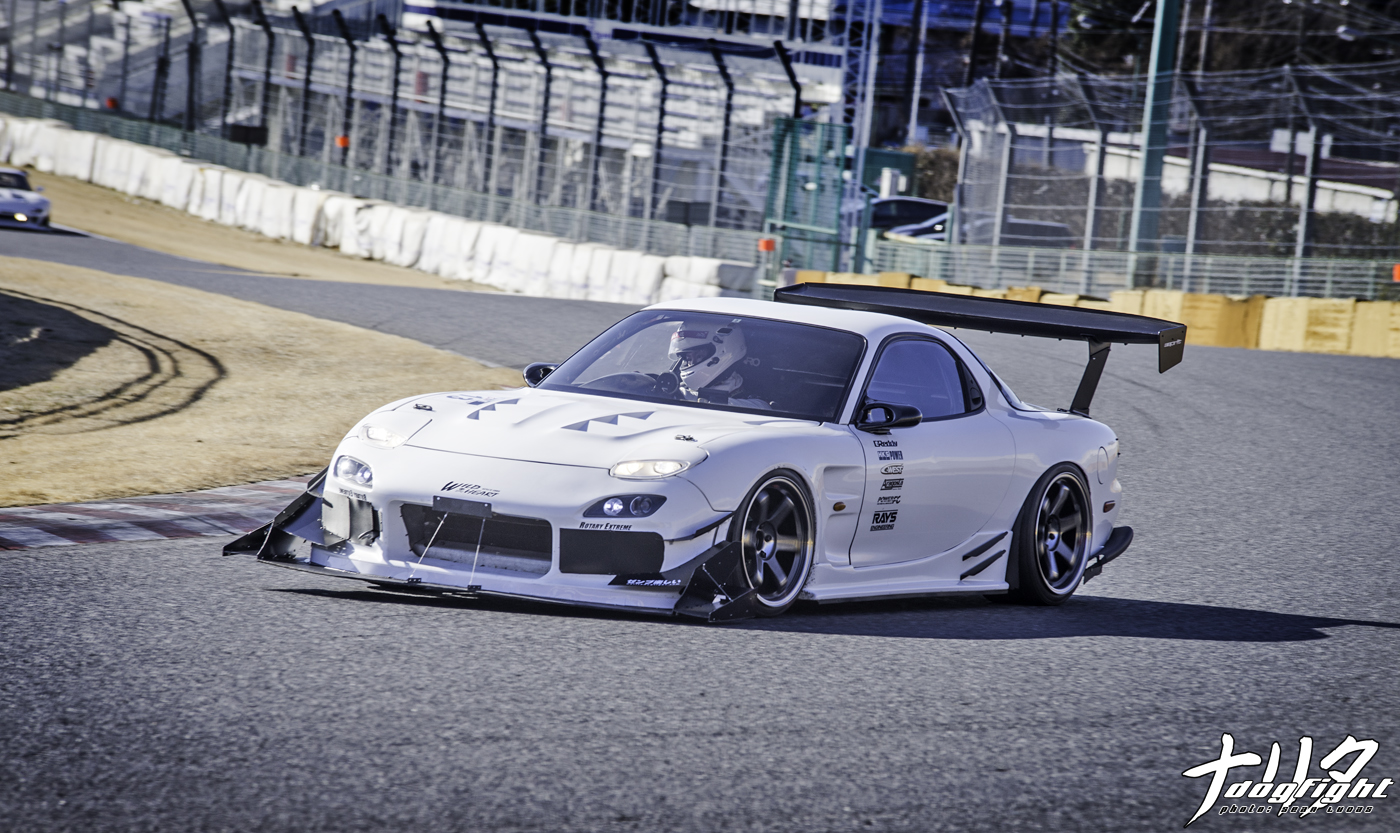 He was able to complete the first session on the tires he drove here on, but… 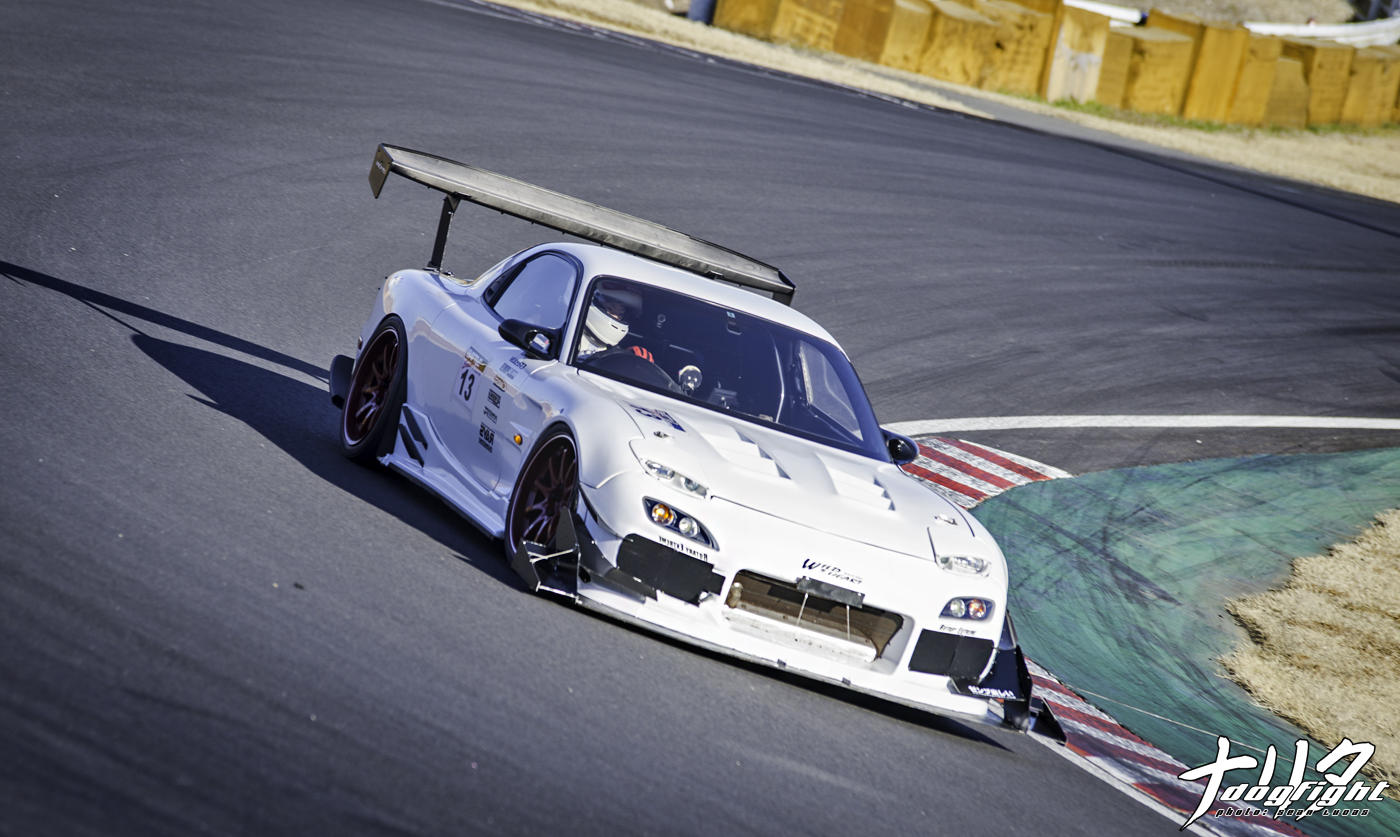 …it didn’t take long for them to wear and it was necessary for him to switch sets.  Since the privateer events don’t necessarily have access to tire machines, each competitor has to bring an additional set of tires already mounted on wheels. 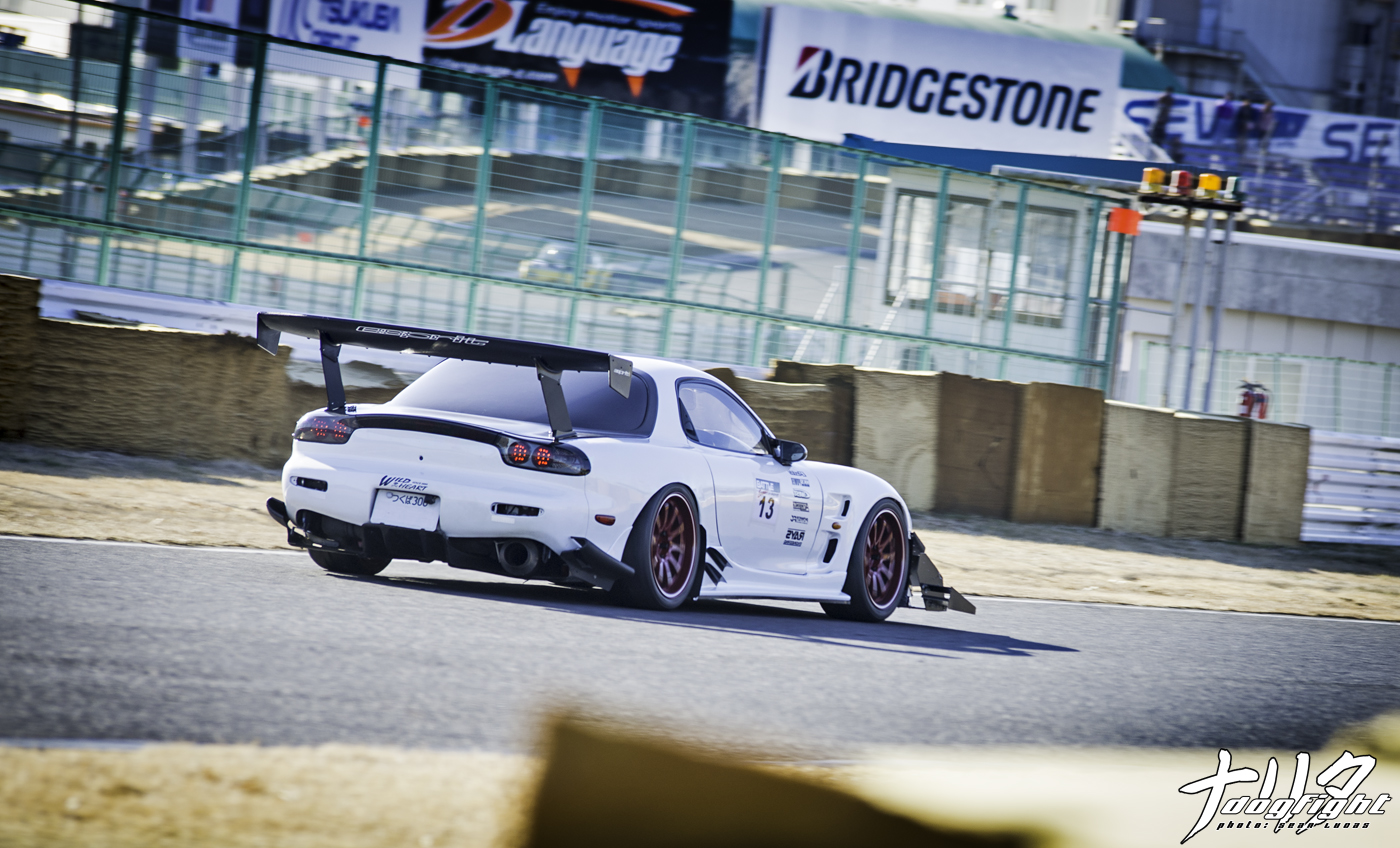 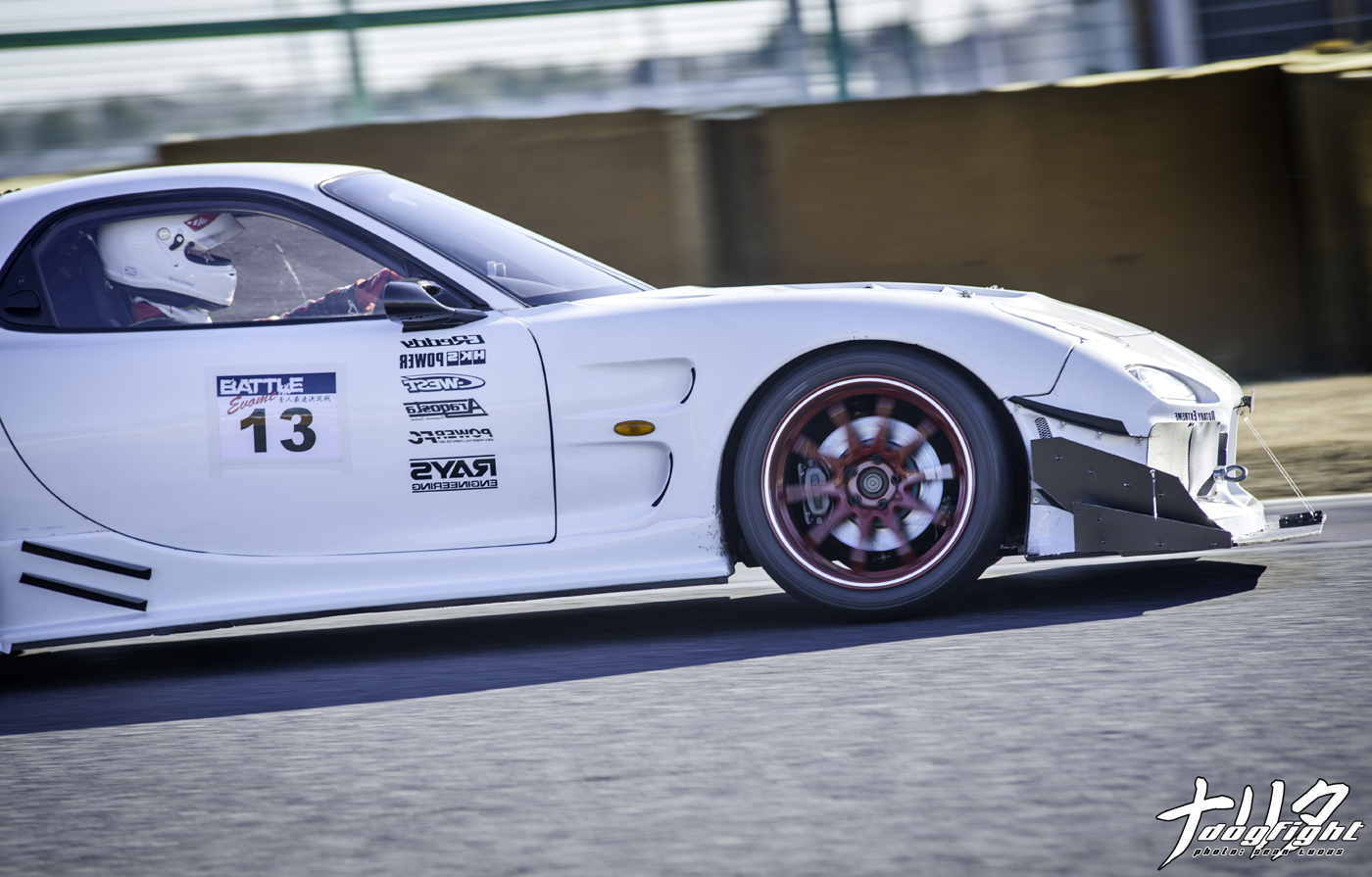 It was on this next outing he was able to lock in his new personal best.  With the custom Auto Craft Kyoto titanium exhaust resonating throughout the track, Tommy pushed the twin turbo FD to near 57 second times. 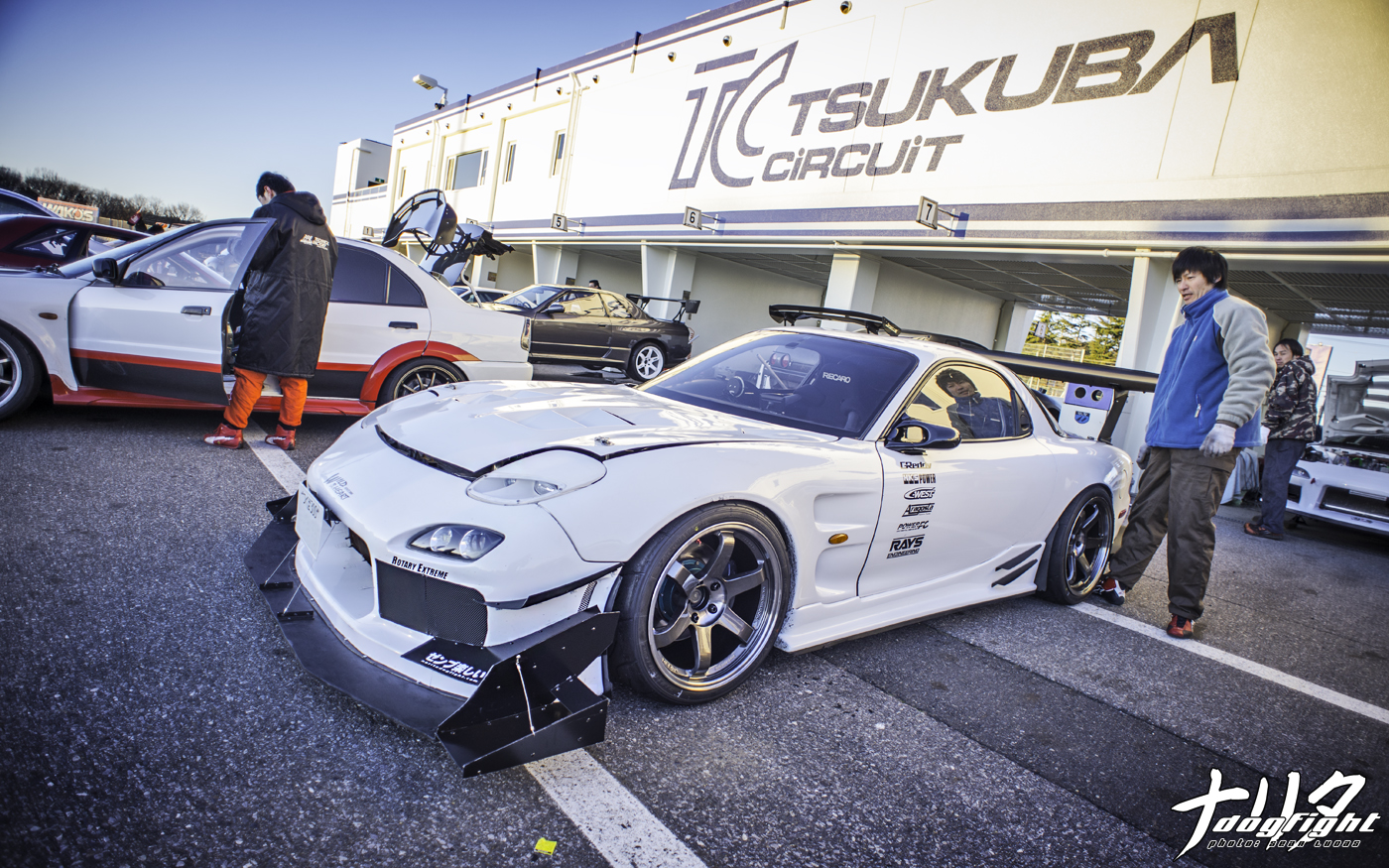 While the car boasts a custom V-Mount setup, as well as a handful of little tuning bits and a boost up, it’s still a relatively mildly tuned engine.  I can’t imagine if more focus was put into the engine what this car could achieve.  No doubt we’ll be in Japan for next year to see how much Tommy can improve over this year.