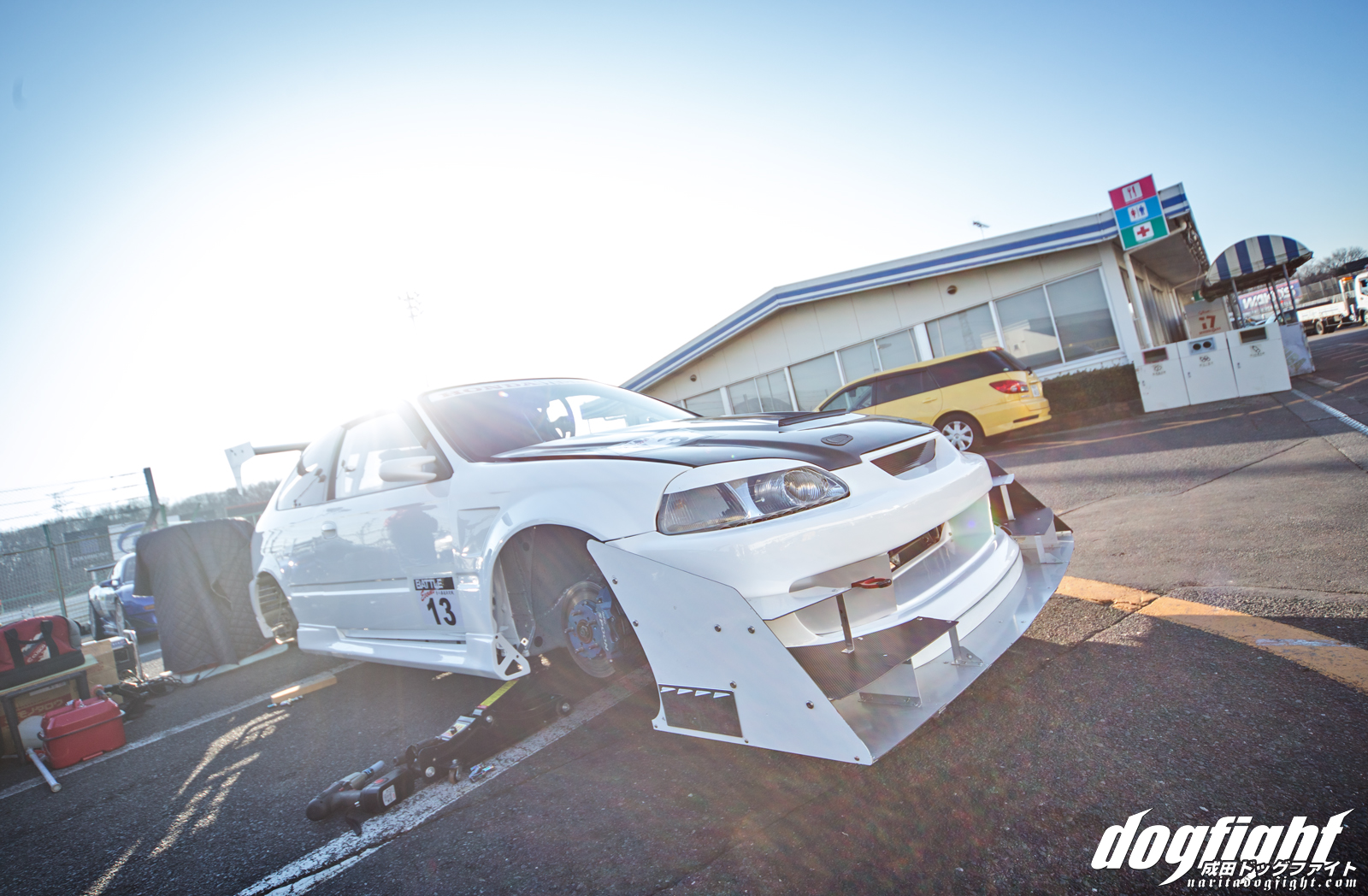 There’s a small community of time attack drivers in Japan that dedicate themselves to the FF base; a chassis that has, arguably, many more challenges to overcome on track than it’s counterpart.  Despite the handicap that these cars have initially, to the people who have devoted their time and knowledge into producing the best, the joy that comes along with victory outweighs any doubt of potential.  As is the case with all Garage Work cars, and especially so for Yusuke Tokue and his EK4.

No doubt the competition in this small niche is fierce at the Garage Work camp, and inter-shop rivalries are all too real; for fun of course, as the friendship and support of cars flying the Work flag is hard to ignore.  Hot on the heels of Iwata’s personal best at TC2000, Tokue has for a long time been looking to top the bossman.  With a 59.108 at the first Evome in January, he was inching ever closer.  With more power output from the B18 this year, it looked like he was poised to do just that, and in late February, at the Attack event, he absolutely destroyed his personal best with an amazing 57.580 and in doing so clinched the FF record.  His goal for the year was to achieve at 57.3, and despite the season winding to a close, I’d say he did pretty darn good.

I don’t have the ability to embed it, but you can check out the hot lap here. 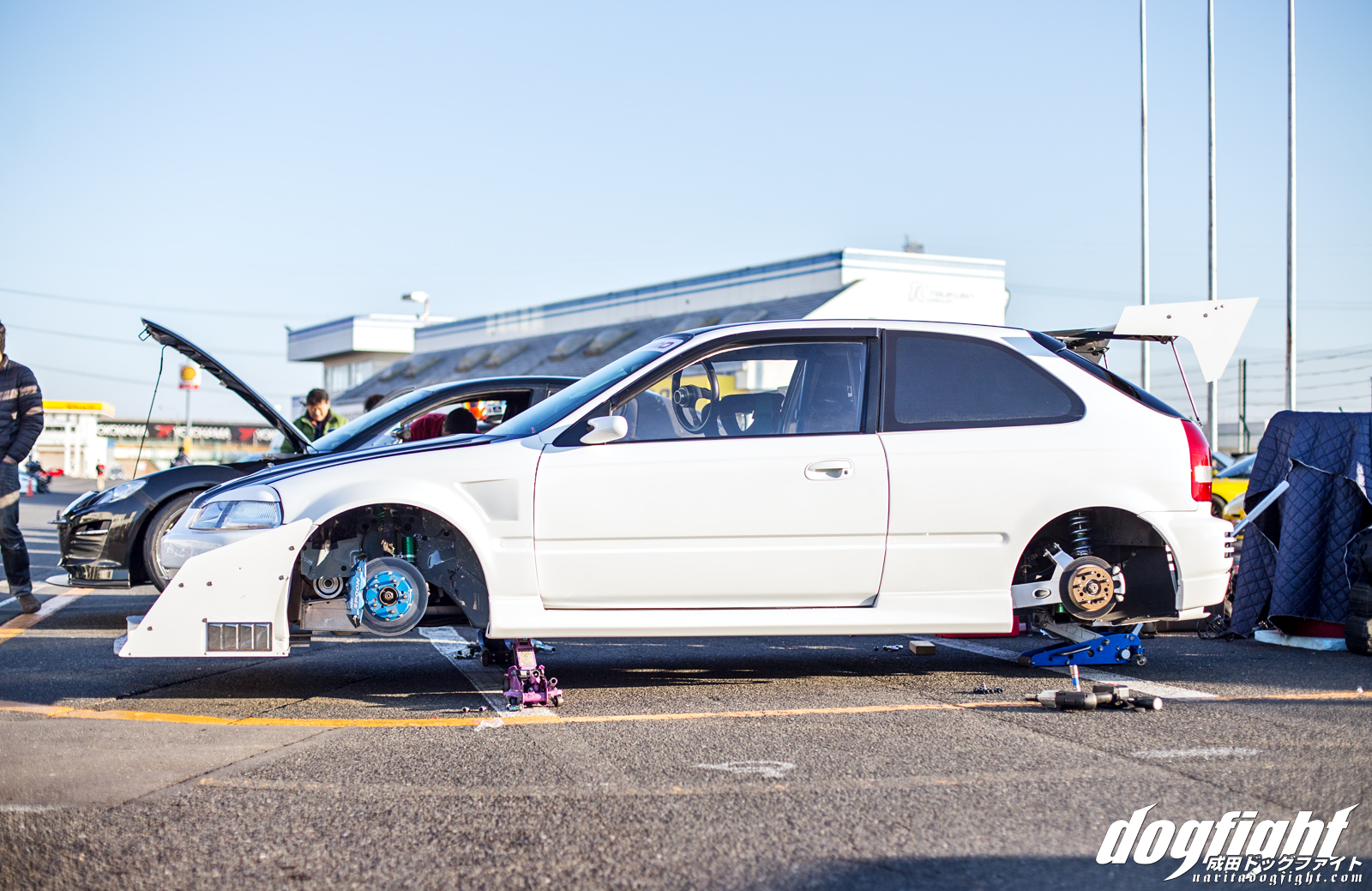 His car, the EK4 here, is the epitome of a Garage Work build.  The fully stripped, seam-riveted chassis, has all the little touches that come out of the small shop in Chiba.  Custom aluminum trailing arms, hole-sawed brake rotors (along with just about everything else), all with the goal of shaving as much weight from the car as possible.  Some may think it’s silly, but the results are proven; Tokue’s car weighs in at a measly 750 kilograms (~1650 pounds).  I thought I was making progress getting my Civic to 1970 pounds…guess I have some work to do. 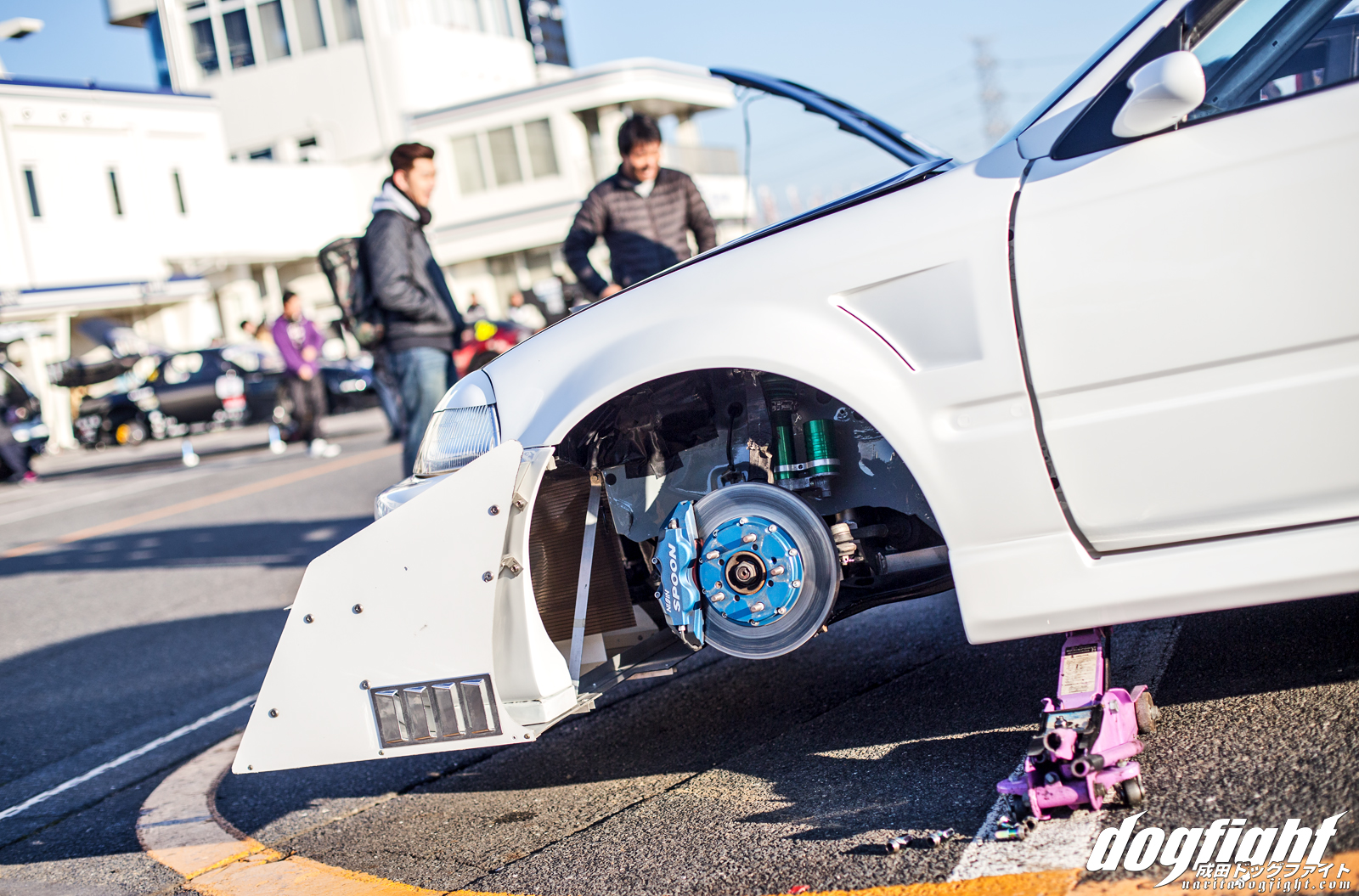 A Spoon brake kit manages most of the friction, while the rear remains OEM with upgraded pads.  Like all the Work cars, Tein has been employed to handle the suspension needs.  As I’ve said before, Garage Work has a very tight-knit relationship with the suspension company, and relies heavily on them for custom valving.  Tokue uses a custom valved set of RS coilovers (Garage Work SPL) with external reservoirs. 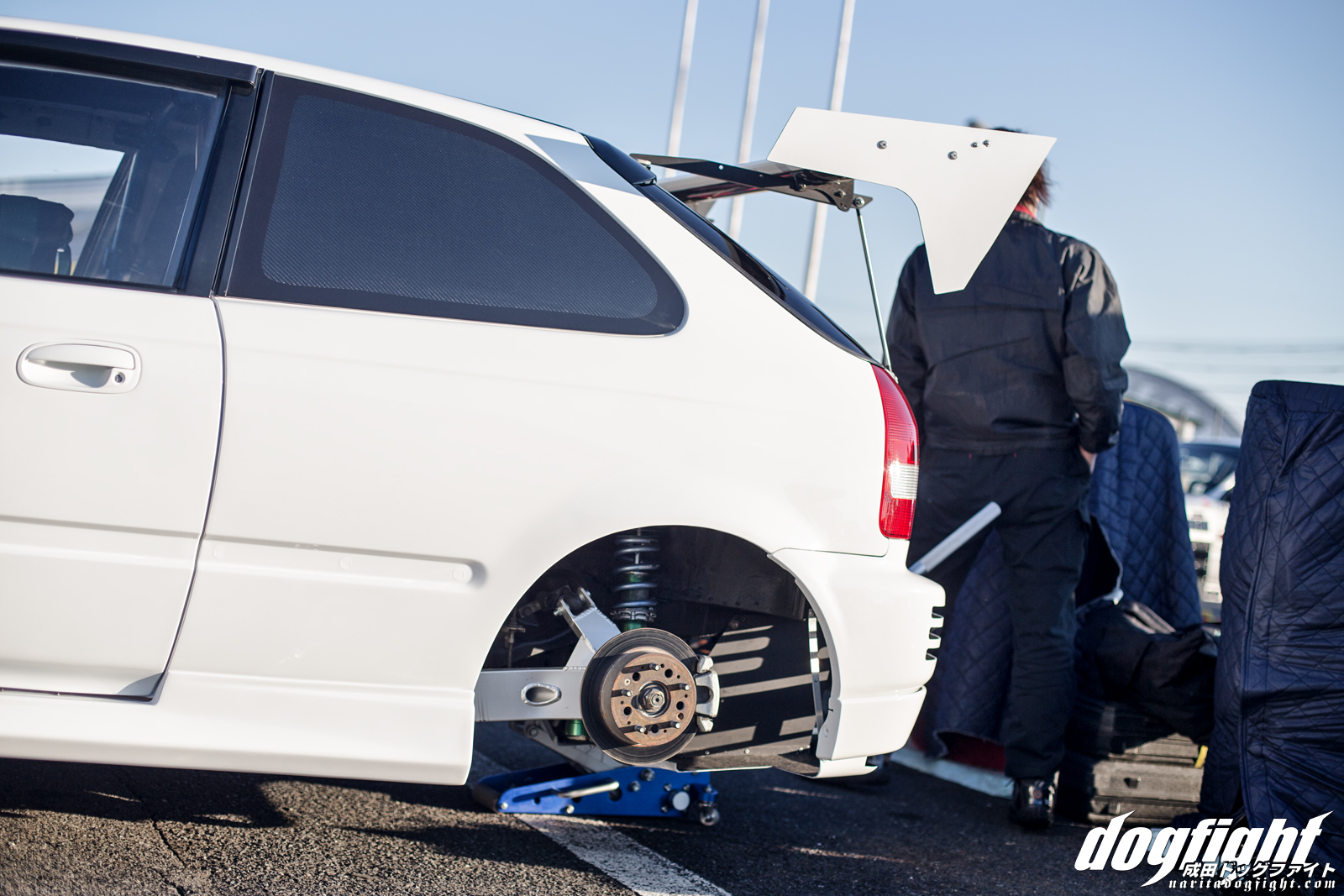 A bit closer look at the custom rear trailing arm. 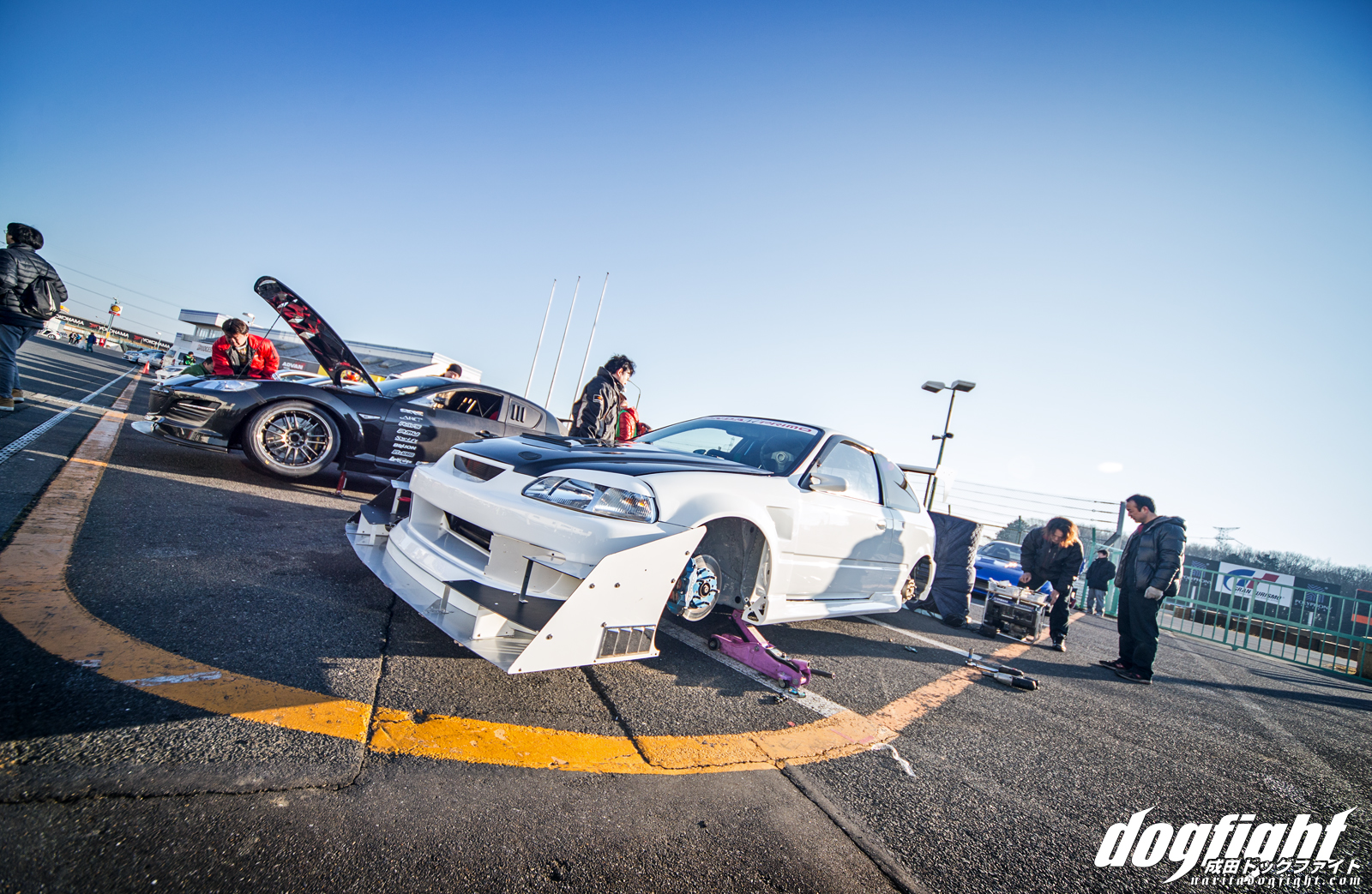 The massive front splitter and canard setup is a foreign concept to some, but a necessity in assisting rotation for these FF cars.  Understeer is without a doubt the biggest issue in tracking a front wheel drive car, and aerodynamics has come a long way in helping to negate the physics of that.  Watching these cars on track, there isn’t a bit of shoveling even in the tightest turns. 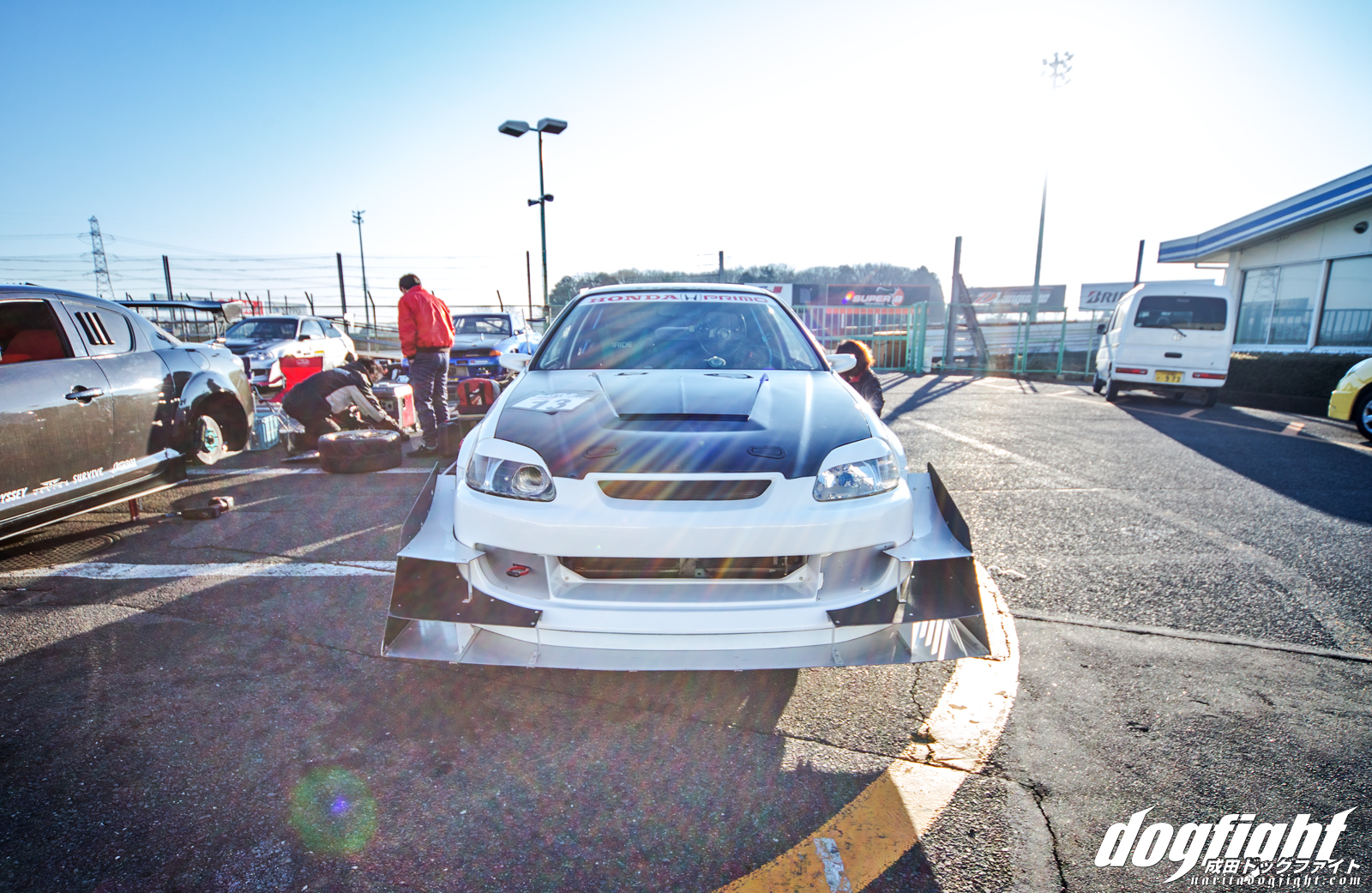 Sunrise at Tsukuba will always be home to my nostalgia for Japan.  It may be one of those things that I’ve had the privilege of experiencing so many times, but it’s also the one thing that I can’t wait to get back to. 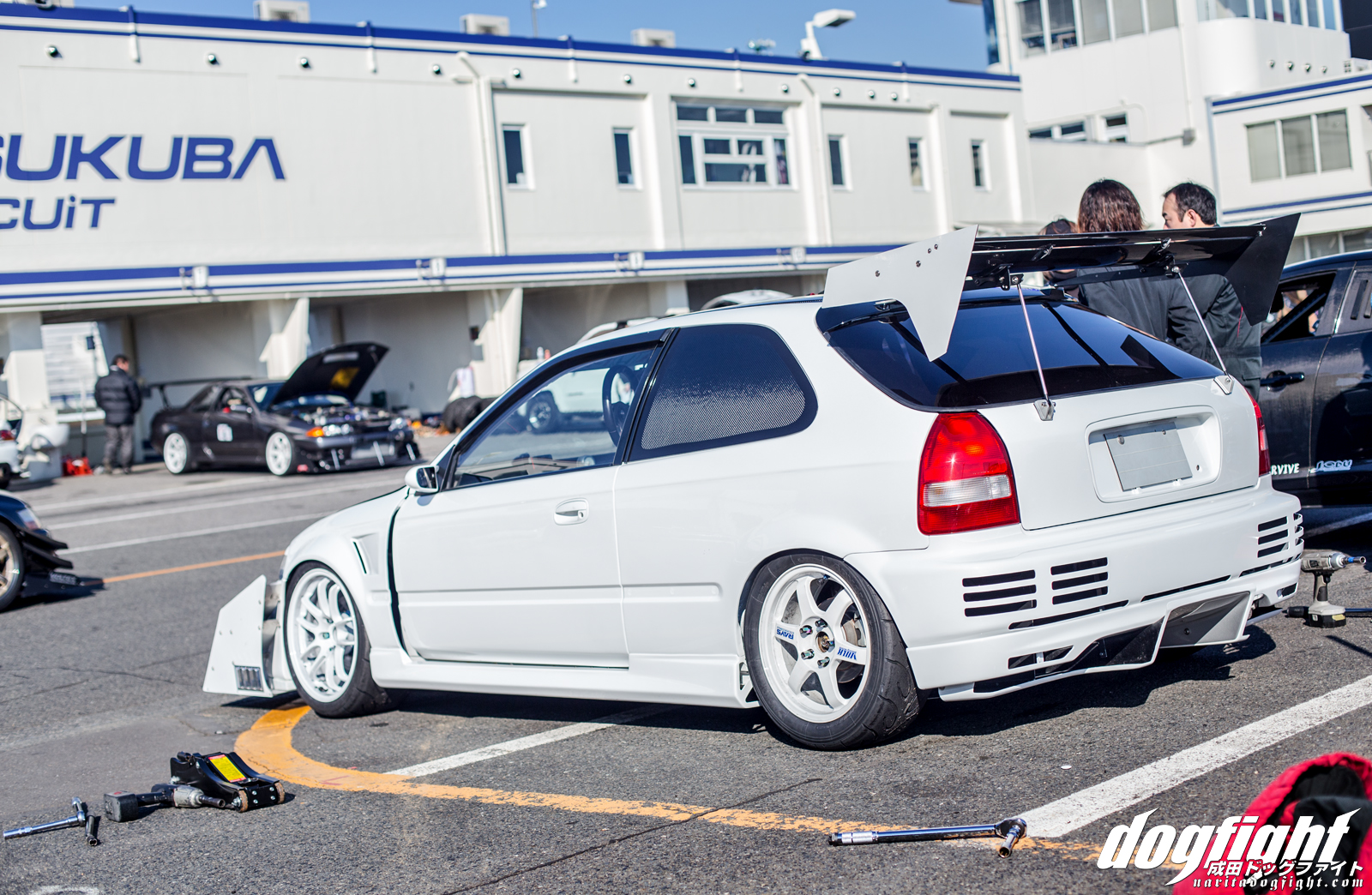 These events don’t wait for anyone though, and within minutes it seems the slow pace of the morning has faded and in it’s place lies a plethora of well-built attack machines ready to take on TC2000. 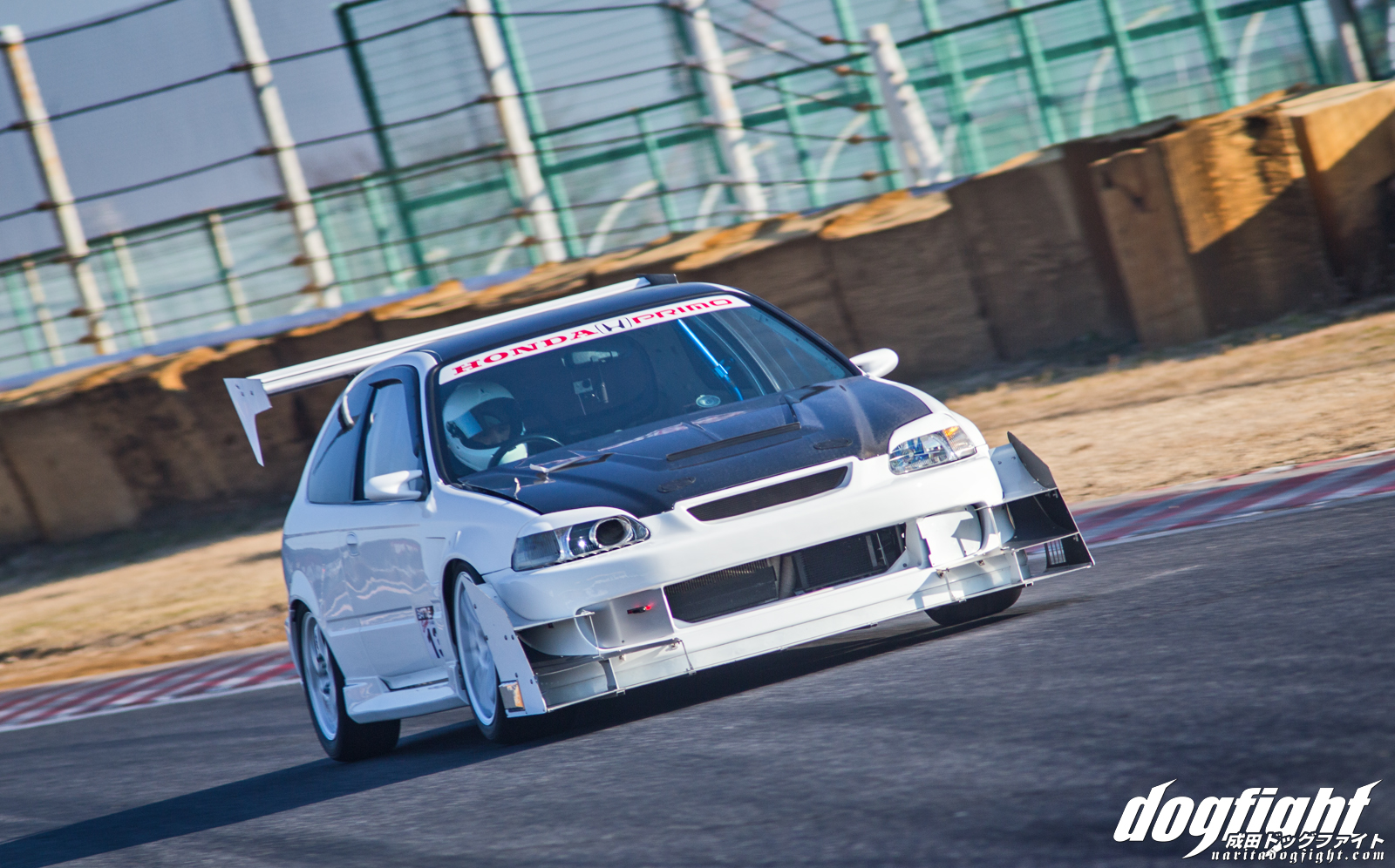 Powering out of turn 1 headed into the chicane, I’m rewarded with the sound of a 275 horsepower, all-motor exhaust note that’s both ear splitting and beautiful at the same time. 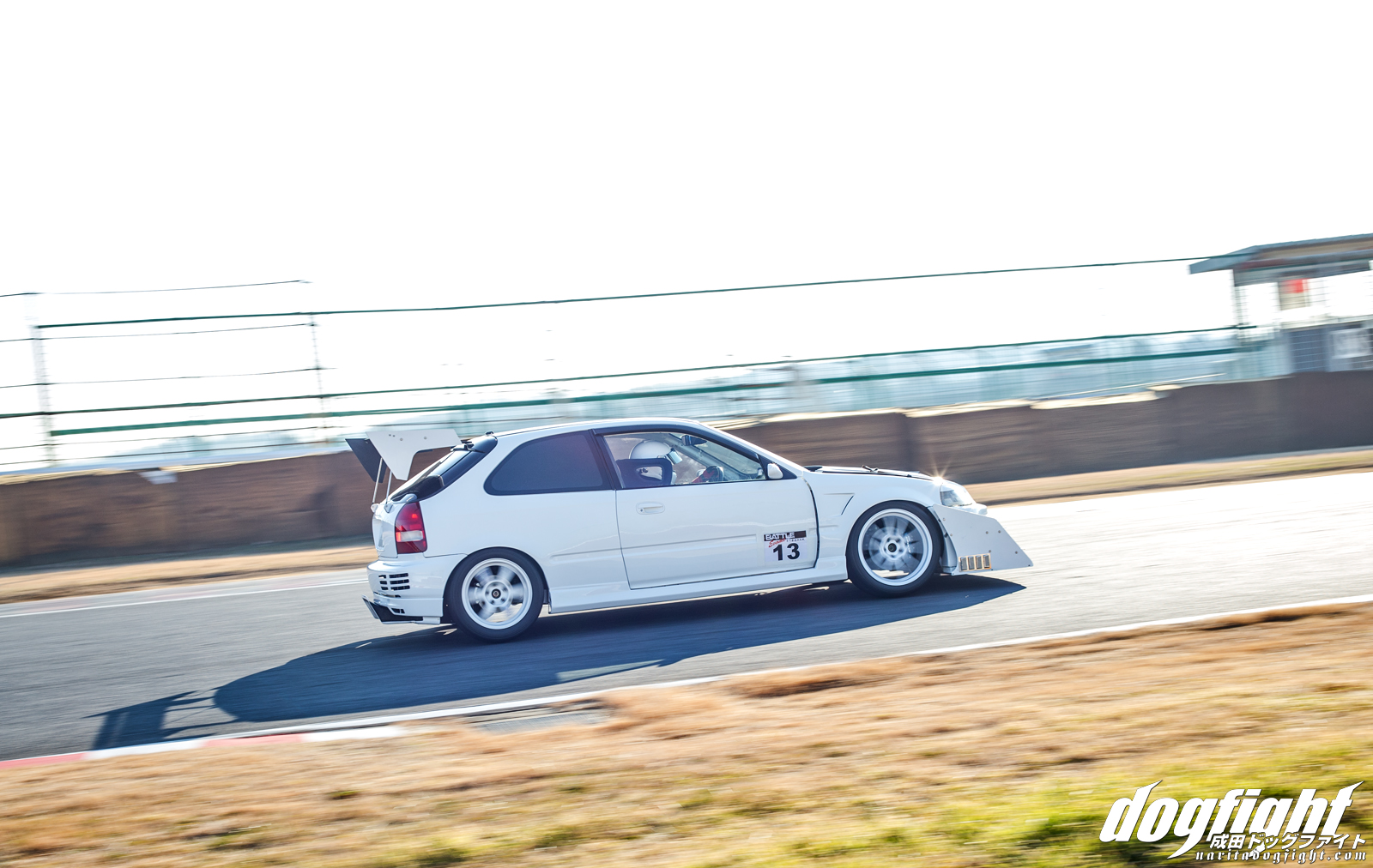 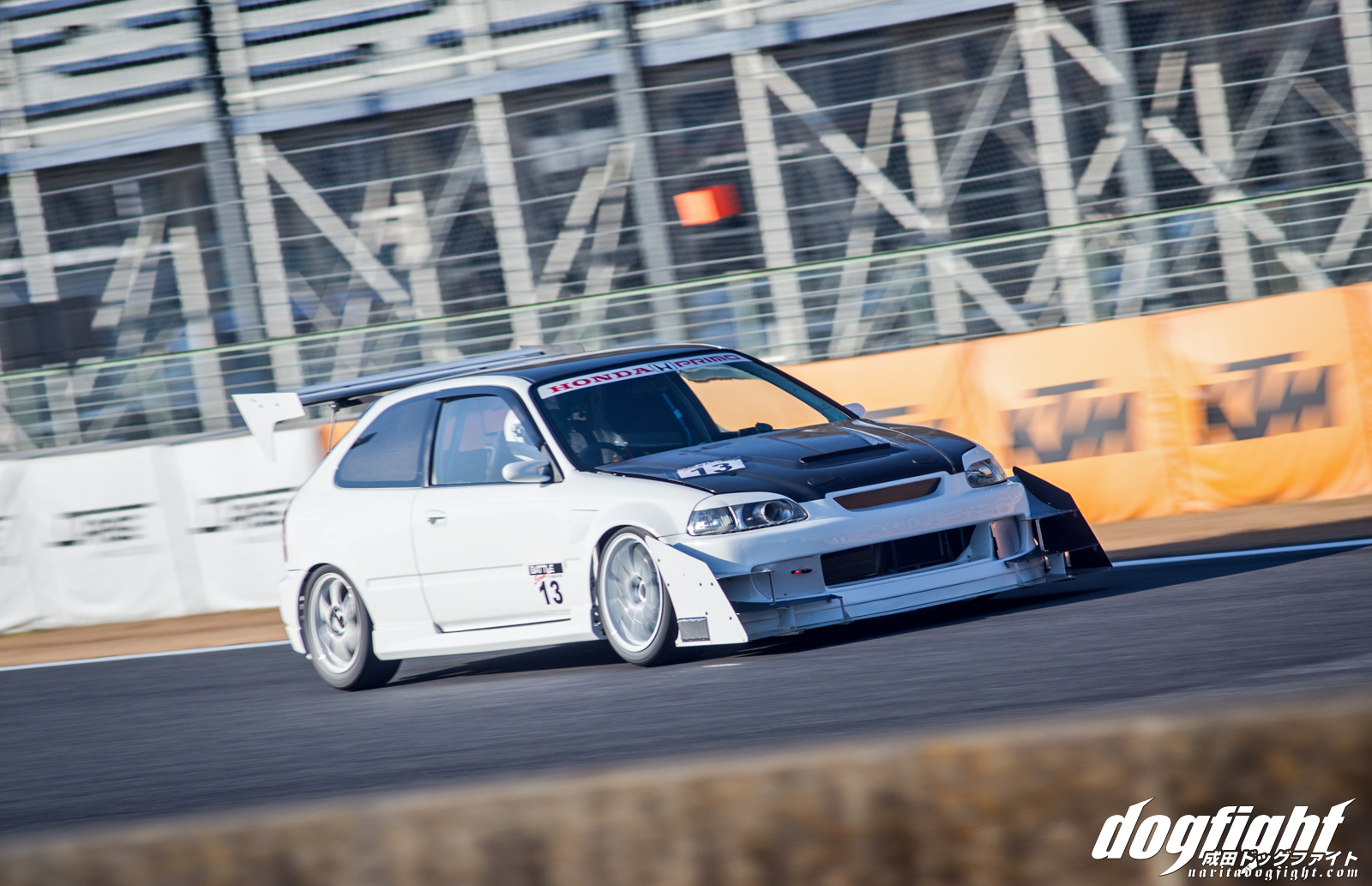 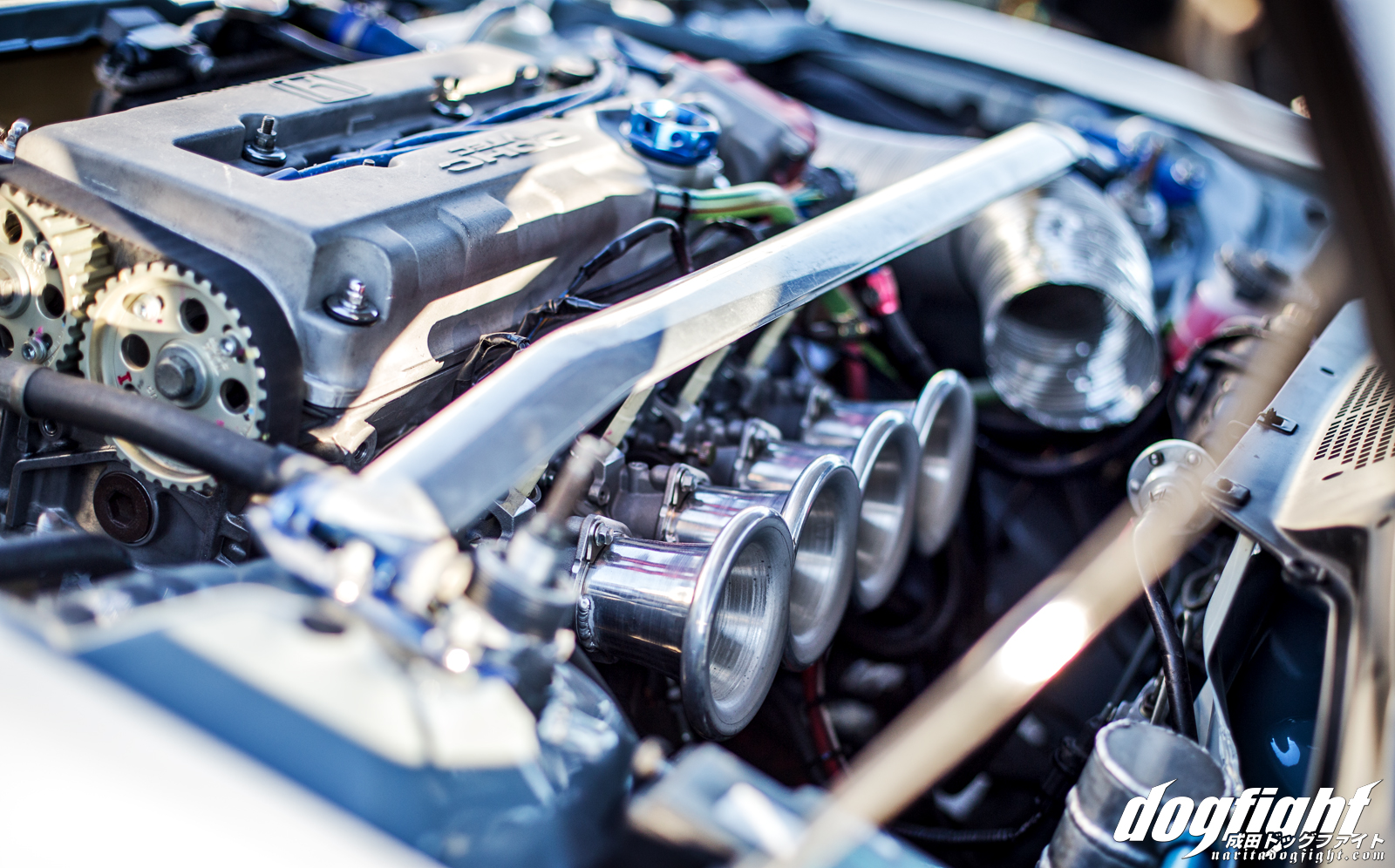 The B18C you find underneath the hood is typically of most all Garage Work builds.  Naturally aspirated, TODA drivetrain; Tokue, however, has opted to up the ante this time around.  Power levels in his engine are peaking in the 275 horsepower range, while most of the camp is still in the 230’s and 240’s.  This, in conjunction with some other changes, may have given him the edge he needed to break into the 57’s. 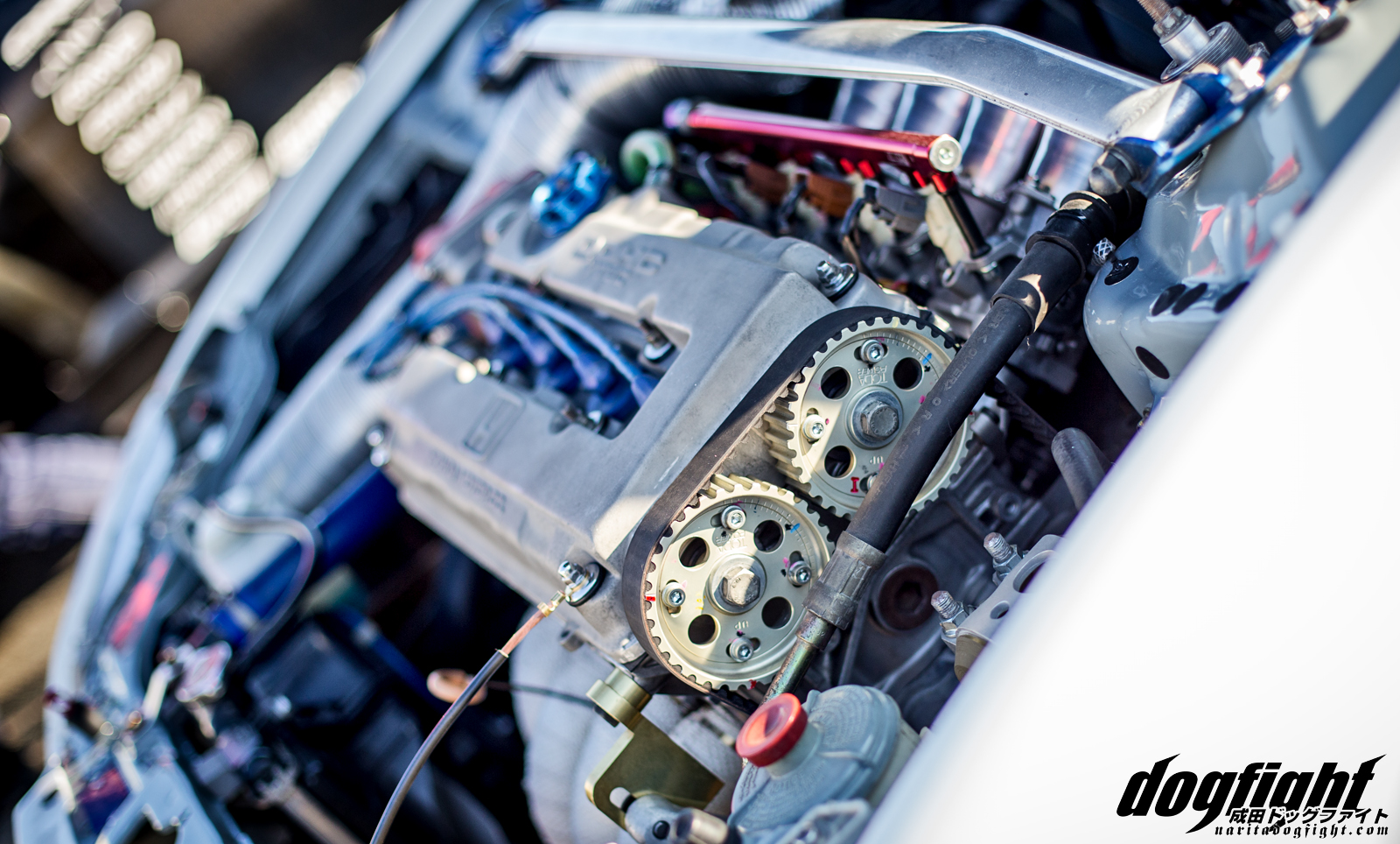 The power of the B-series is not to be taken for granted! 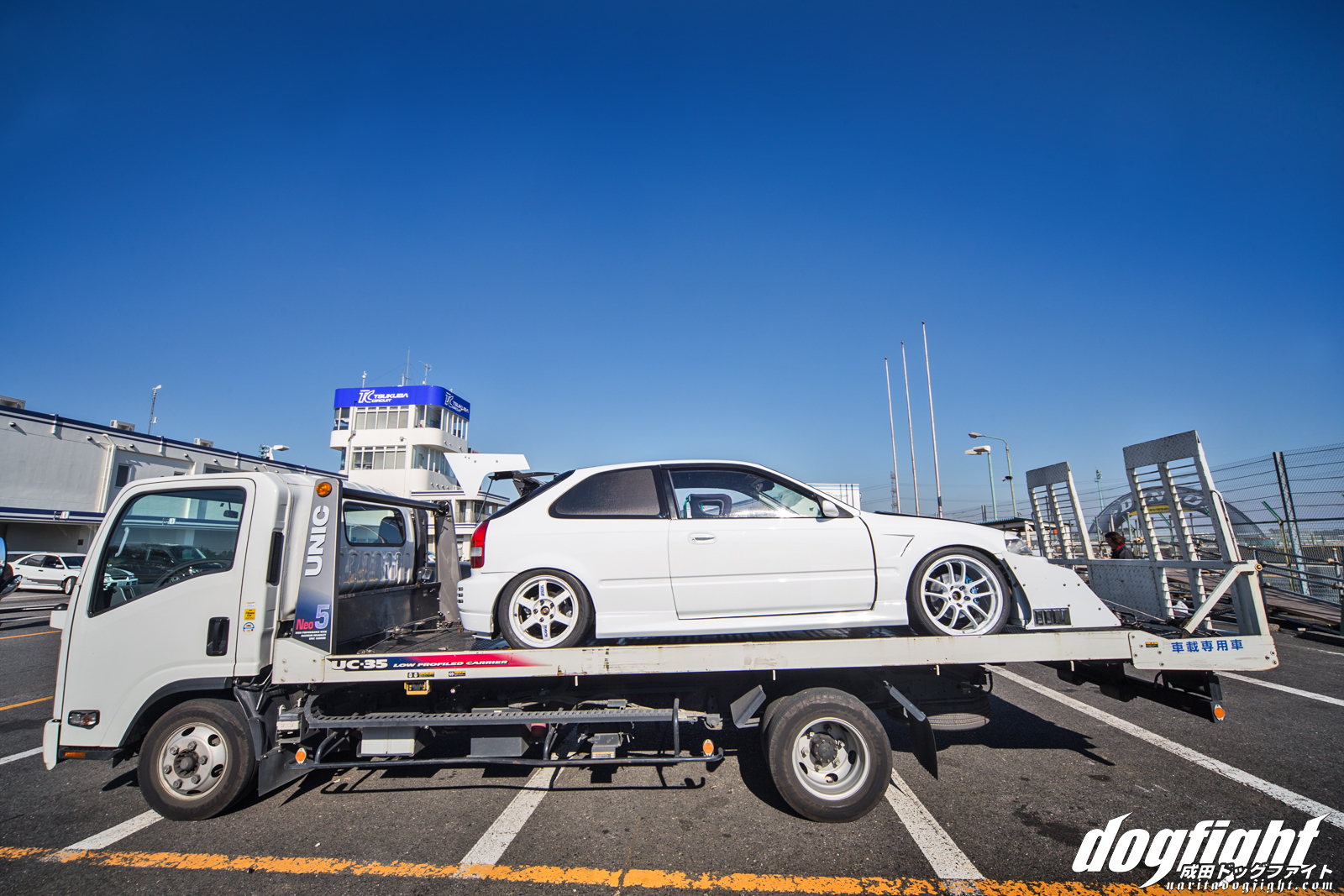 It’s hard to imagine just how much more time can be cut from the 2 kilometer course.  With this knife-edge driving, pushing the car to it’s limit on each turn, what more can be done to find those tenths? 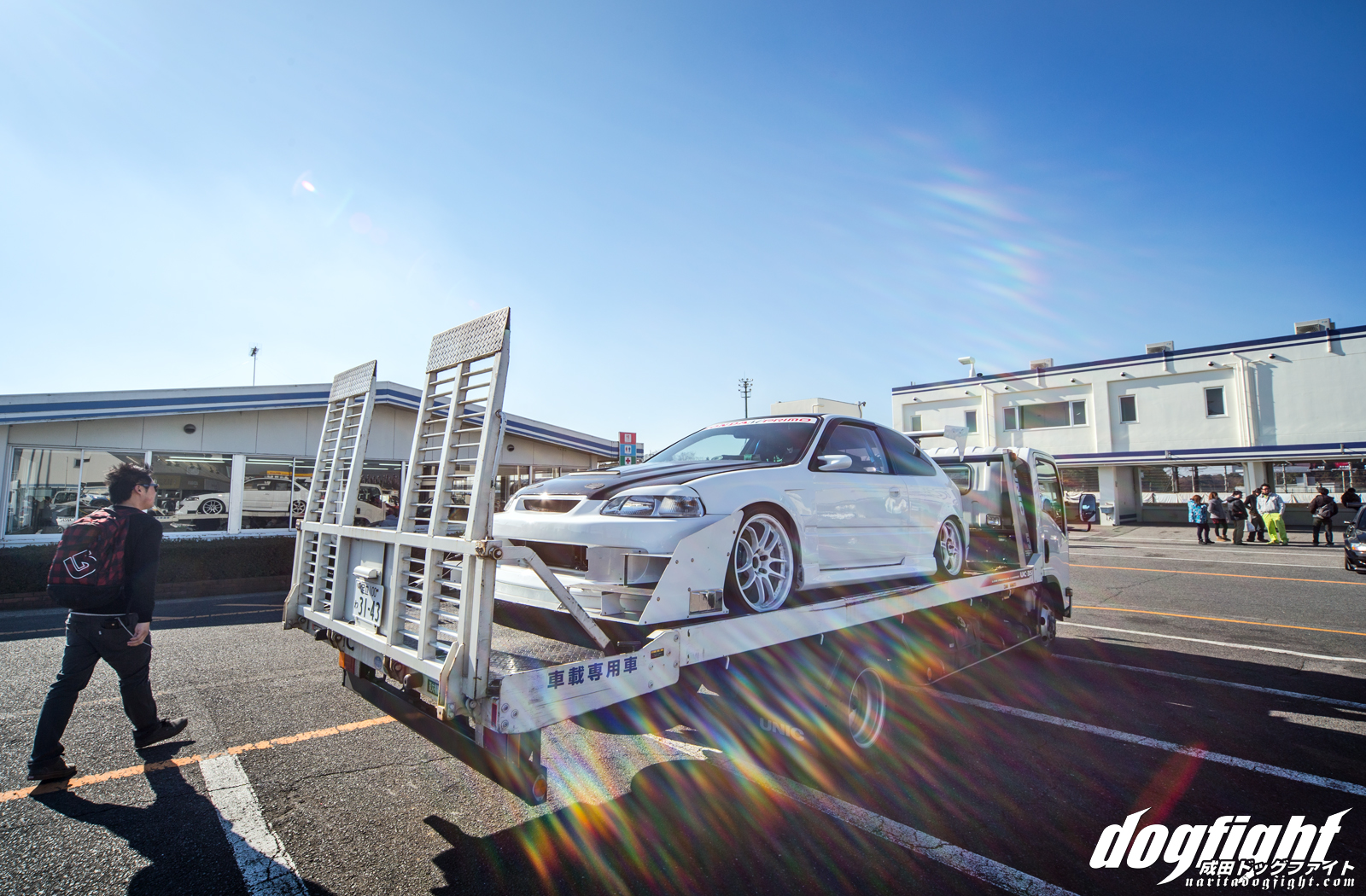 I have no apprehensions that Tokue will be able to find them though. 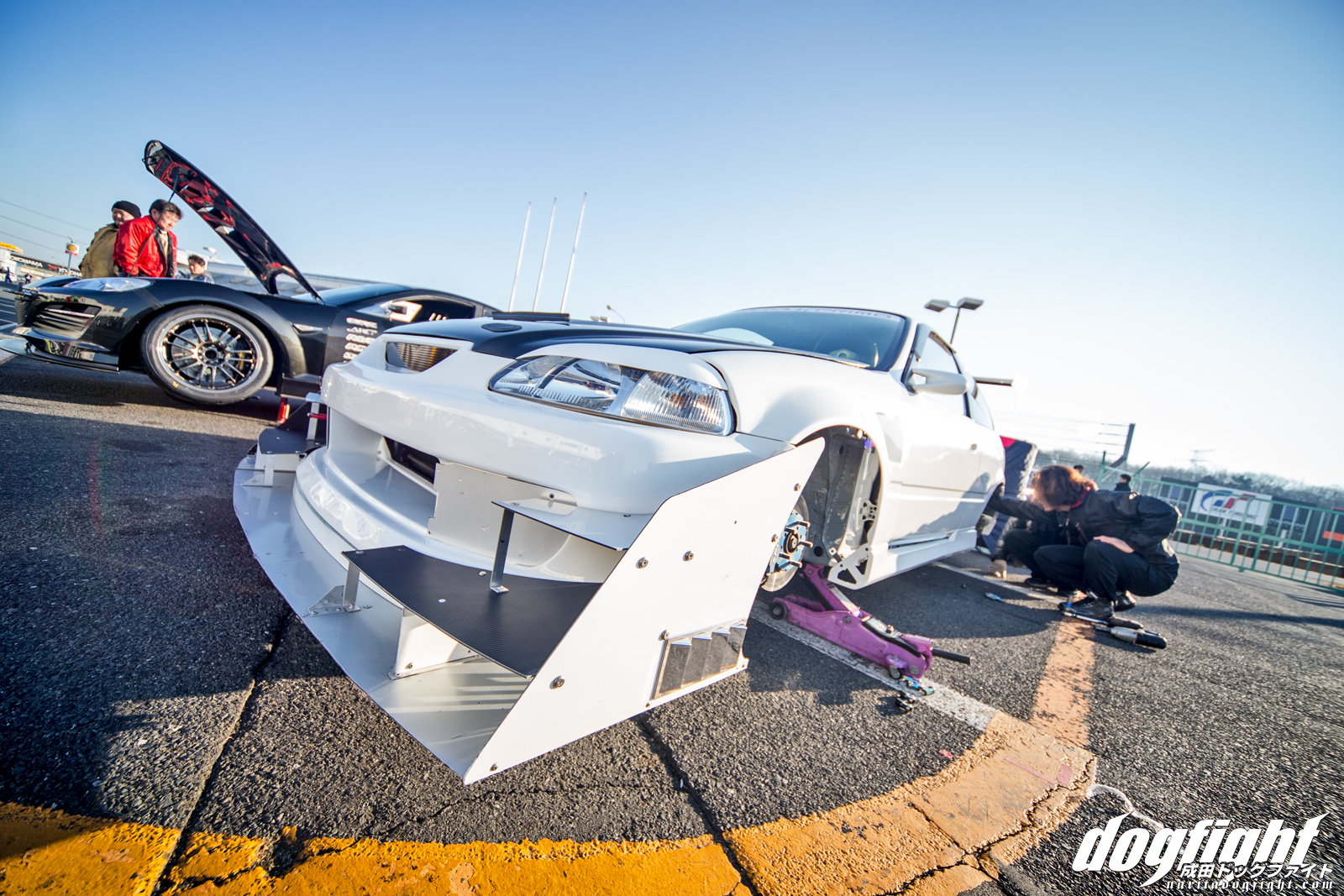 Whether it be from mastering the car, or to clever modification, he’ll find them for sure.  The devotion he has to the underdog configuration of the FF has gotten him this far, let’s see how much further they can go together.