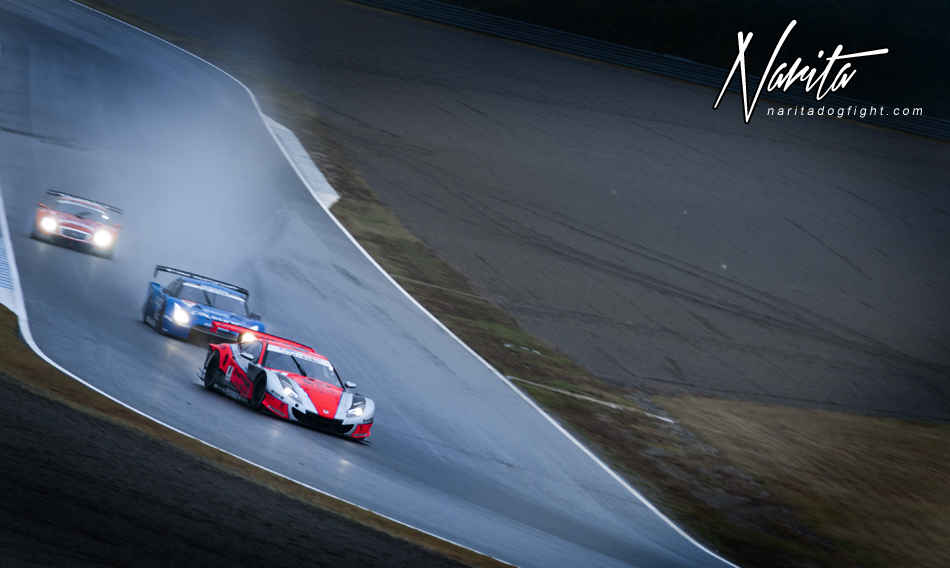 After my well deserved break after the Super GT practice session, it wasn’t long before the final race of the season got underway.  In typical Japanese fashion, as soon as the flag dropped, so did the rain; causing confusion for many of the teams..  Twin Ring held the weather at bay throughout practice, but the precipitation proved to be too much for the track to handle.  Not one to fight things I can’t control, I opened up my newly acquired Mugen Power umbrella and made my way track-side. Although cumbersome to shoot in the rain, my troubles paled in comparison to what mild rain at the start of a race does to the race strategy.  The drizzle in warm-up was similar to that of the seasons second race in Fuji; where incorrect tire choices led to the ARTA HSV’s DNF.  Despite the adverse conditions, it didn’t take long for the two classes to start their own dogfights.  While the racing was intense in the top 5, the Mugen Power team managed a lackluster 11th place finish in the GT300 class; not quite as impressive as the beginning of their season. The ZENT Audi powers down the second straight heading towards turn 2.  Although I’m sure the battle was difficult, the R8 could only manage a mere 9th place finish at the end of the day. Leading the way into this hard left is the Endless Taisan GT300 Porsche; the team that ended up claiming a well deserved first place at this race, thus clenching the GT300 championship from the grip of the Hankook team.  A result the team director was extremely grateful for. The GT500 pole and race winner, the ZENT Cerumo SC430, locked in a drag race to the corner with the GT300 BMW of the GSR Hatsunemiku team.  Piloted by Taniguchi and Kataoka, the GSR BMW ended up with a respectable 4th place finish at Motegi.  Here you can see the rain had gotten worse than it was during the start of the race. While they enjoyed the early lead, it wasn’t without it’s fair share of stress.  About mid-race, armed with a fresh set of tires, the S-Road MOLA GTR was breathing down the neck of the SC430.  With the rain falling harder, and the front-runners coming up on the back markers, the ZENT SC430’s lead over the GTR fell to a nail biting 1 second; a fight that would continue down to the final lap. The #33 Hankook Porsche had a tough break this round, losing it’s grip over the Endless Porsche, and it’s championship point lead.  Once it lost it’s hold on the race early on, it was all downhill.  Being passed numerous times, landing itself in seventh place in the race, resulting in a second place in the 2012 championship; a bitter result to say the least. The Triple A Vantage GT3 car, all things considered, had a fantastic race.  Starting at the back of the grid due to mechanical failure, the driver’s ran a great race to fight their way back to an impressive fifth place finish.  A finish that clenched them enough points to claim the final position on the championship podium, and ending the points battle that made this year’s GT300 races so exciting. GT500 sandwich coming down the back straight into turn 3. …exiting at the same pace, and having an all out drag to the next turn!  In this case, the #88 MonePa Gallardo piloted by none other than Max Orido, had no problems in lapping the Run Up Z06.  The Lamborghini’s had a great run at Motegi, claiming both the second and third podium spots.  The Run Up team, who struggled with setup all day, ended up 9 laps back in 20th position. With about a third of the race left to run, the GSR ProjectMirai Z4 went too hard entering near the chicane and ended up in the gravel. The BMW was quickly towed back to the pits by this Nissan Sandcrawler. We’ll take a break for now, but check back soon for the end result and final coverage of Super GT for the 2012 season!